A 59-year-old man with a history of diabetes mellitus, coronary artery disease, and severe peripheral vascular disease for 5 years presented with rest pain and thrombotic occlusion of the left aortofemoral limb 1 month ago.

His peripheral vascular disease history included a total of five revascularization failures over 5 years: an aortobifemoral graft placed 5 years ago at an outside institution for “severe aortoiliac disease,” left femoropopliteal bypass 1 year later for an occluded left superficial femoral artery (SFA) and claudication (Rutherford class 3, lifestyle limiting), and three more left-sided aortobifemoral limb failures and left femoropopliteal graft occlusion treated with a self-expanding stent in the graft over the next 2 years. On presentation, resting ankle-brachial index (ABI) was 0.3 on the left and 0.7 on the right. Angiography was performed, which revealed an occluded left femoropopliteal bypass, an occluded native left SFA, collaterals to the previously stented popliteal artery, a single anterior tibial (AT) runoff to the mid-calf, and no direct flow to the foot (critical limb ischemia [CLI]) (Figure 1 and Figure 2). 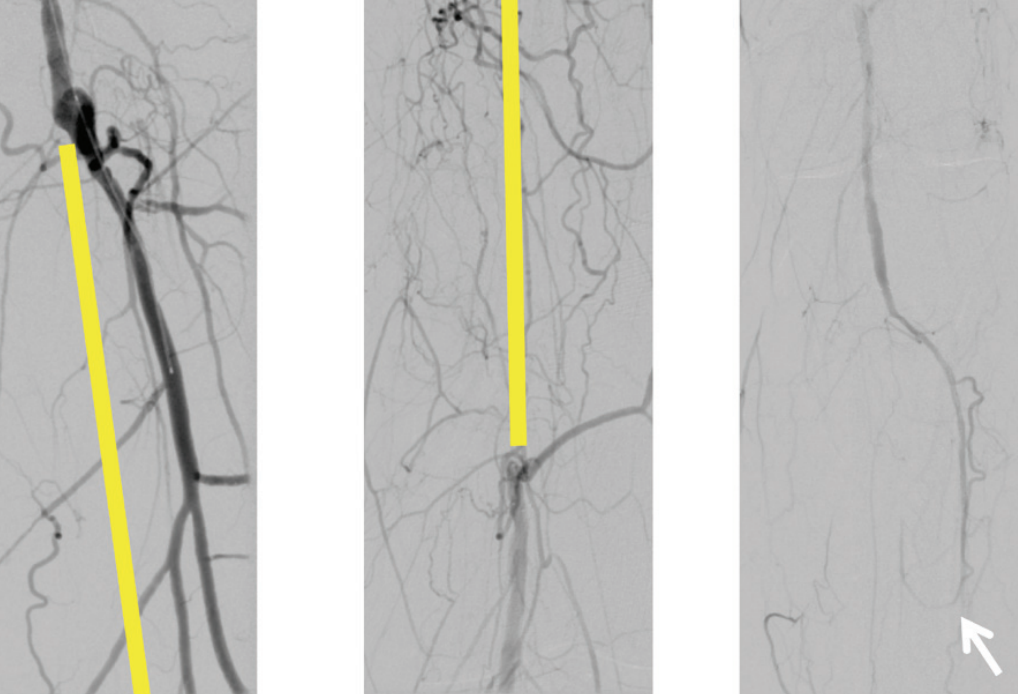 How would you approach this relatively young patient with multiple therapy failures (ie, access approach, recanalization approach) and why?

Dr. Adams: This patient has CLI (Rutherford class 4), which portends a poor prognosis with severe morbidity in a relatively young patient. The goal would be to safely reconstitute direct inline flow to the foot without compromising outflow. Additionally, we will open at least two tibial vessels to optimize patency and alleviate the patient’s rest pain.

I would approach the procedure in the following steps:

• Access the left brachial artery instead of the right brachial artery so I would not have to manipulate the arch (safer) and it is closer to distal aorta. I would choose brachial over radial access because of the decreased length to the distal aorta and the larger vessel to safely hold a 7-F sheath.
• Place a long 7-F, 90-cm Shuttle sheath (Cook Medical) to the level of the distal aorta, anticoagulate with heparin to achieve an activated clotting time > 250 seconds, use an 0.014-inch Runthrough wire (Terumo Interventional Systems) and extend through the native left common iliac artery (CIA) to the common femoral artery (CFA).
• Prep the distal external iliac artery (EIA), the proximal EIA at level of the internal iliac takeoff, and the proximal CIA with a 7- X 60-mm Shockwave lithotripsy balloon (Shockwave Medical).
• Perform intravascular ultrasound to evaluate the reference vessel diameter of the distal EIA, proximal EIA, and proximal CIA and also evaluate for any complications.
• Then, use percutaneous transluminal angioplasty (PTA) with a 7-mm balloon at the level of the distal EIA, proximal EIA, and proximal CIA. Place a 6.5-mm Supera self-expanding stent (Abbott Vascular) at the level of the distal EIA, and a 7-mm drug-coated balloon at the level of the proximal left EIA.
• Finally, place a 10- X 50-mm Viabahn stent graft, extending from the ostium of the left CIA. Post balloon angioplasty with a 9- X 40-mm balloon taking to maximum pressure of the Viabahn with a 10-mm balloon, slowly evaluating for back pain.

Now, there should be inline flow to the CFA and profunda. Considering the stent in the distal femoropoliteal bypass graft jails the native popliteal, the next step is to open the CFA to popliteal bypass, understanding there is most likely a significant amount of soft plaque (thrombus).

Now, there should be inline flow from the aorta to the P3 segment of the popliteal artery. The goal of therapy now is to open both the AT artery distally and the peroneal artery proximally because inline flow to the foot is needed to maintain patency of the inflow and may help with rest pain.

• From an antegrade approach, try to take a good picture of the foot to see AT (dorsalis pedis) and posterior tibial (PT) arteries (medial and lateral calcaneal branches) at the level of the foot.
• Extend a benign 0.014-inch wire to the level of the distal AT, supported by an 0.018-inch crossing catheter. Switch out for an 0.014-inch, 18-g tip hydrophilic wire and try to stay near the true lumen and cross to the dorsalis pedis. If unsuccessful, access the dorsalis pedis by placing a 4-F sheath. Cross the AT chronic total occlusion with an 0.014-inch, 18-g tipped wire. Once crossed from below, perform PTA with at least a 2.5-mm-diameter microballoon, which should provide inline flow to the toes.

Now, turn the attention to the peroneal artery, which supplies flow to the PT distally as well as the distal AT arteries.

• Based on the figures, there appears to be a hint of flow through the tibioperoneal trunk. Therefore, use a benign-tipped, 0.014-inch platform supported by a 0.018-inch crossing wire through the antegrade CFA access to cross the tibioperoneal trunk into the peroneal artery. If successfully crossed, perform PTA with a 3-mm-diameter balloon.
• If subintimal cannulation occurs, access the peroneal artery in a retrograde fashion with a 4-F sheath. Cross from below using the support of an 0.018-inch crossing catheter and a 0.014-inch wire with an 18-g tip. If crossing from retrograde fashion, perform PTA with a 3-mm-diameter short shaft microballoon through the retrograde access.

Dr. Rundback: Because the patient has Rutherford class 4 disease without an active wound, I would stage therapy with a plan to first fix the restenosis in the left iliac segments and then address the infrainguinal occlusive disease if necessary. I suspect that the dominance of the profunda in this patient may then provide adequate perfusion to alleviate ischemic rest pain. For the iliac intervention, the retrograde femoral access used for the angiogram would allow angioplasty and stenting of the stenotic native CIA and EIA segment while preserving the hypogastric artery and pelvic arterial supply. Because this is a de novo intervention on the native iliac, I am indifferent to the use of a bare-metal stent or stent graft; personally, I would probably start with balloon-expandable stents.

Dr. Montero-Baker: This is a relatively young patient with multiple failed revascularizations; therefore, this patient needs an in-depth workup for potential prothrombotic medical issues. It’s not infrequent that we would be able to find a reason for the repetitive reocclusions, and more importantly, the potential for medical optimization.

As for the clinical presentation, this patient seems to be a stable claudicant with noninvassive laboratories suggestive of profound and worrisome arterial compromise. In this setting, given the history, as well as hemodynamic evaluation and diagnostic angiogram performed, I would consider intervention/rescue of the native system.

The left limb of the graft has failed multiple times, which makes me suspicious of a possible technical component that could hinder patency, rather than the medical prothrombotic issues mentioned previously. I would likely give up on the resuscitation of this surgical revascularization.

Data on the endovascular management of complex TransAtlantic Inter-Society Consensus C/D iliac disease is strong, specifically for polytetrafluoroethylene-covered endoprosthetics. Coverage of the left common iliac disease and external iliac disease with covered stents (balloon-expandable or self-expanding would likely be my primary approach.

The access for such a procedure would likely be a left brachial approach if the patient has an adequately sized access artery as well as normal hemodynamics (a normal pulse exam, would likely suffice). The other alternative would be ipsilateral and retrograde through the left CFA, but this would be hindered by the robust scarring of the skin secondary to the multiple surgical interventions that the patient has had in that groin. It’s very challenging to get even the smallest of sheaths through highly scarred groins. The contralateral occlusion of the iliac system would be the main reason why an alternative approach would be preferred.

As for the left SFA occlusion with poor outflow, I would cautiously intervene after assessing the patient’s response to the initial inflow intervention. Most patient with short-distance claudication or rest pain will get great benefit from inline flow revascularization to the profunda femoris alone. Additionally, with such poor outflow and the previous distal anastomotic stents placed remotely, I believe we would be sentencing the patient to a very limited patency rate procedure.

What approaches would you almost definitely avoid?

Dr. Rundback: Other than the femoral access shown, an interesting approach for the iliac (and possibly femoral) intervention would be a radial puncture, assuming there is no significant subclavian or arch disease. If femoral or tibial intervention is needed, this can also be accomplished via a pedal approach if the dorsalis pedis or PT reconstitute in the foot. Unfavorable accesses would be contralateral femoral or antegrade ipsilateral approach. A contralateral approach would require a nearly impossible 180° manipulation across the right iliac bypass limb into the distal native aorta and native left iliac artery. An antegrade femoral approach would involve puncture into the hood of the left common femoral anastomosis with almost no purchase for crossing the SFA chronic total occlusion.

Dr. Montero-Baker: I would avoid the following access approaches:

If your chosen course of action is successful, what would your follow-up protocol be?

Dr. Montero-Baker: I would most likely follow the patient closely with duplex and ABI measurements at 2 weeks, as well as at 3, 6, and 12 months. If the patient is medically optimized and advised to join an exercise program, I would remain optimistic that he will continue to show gradual improvement in his quality of life and overall walking distances.

Dr. Rundback: The patient should be maintained on dual antiplatelet therapy for at least 3 months and then either aspirin or clopidogrel thereafter. Cilostazol may be beneficial if there is no history of heart failure. Maximal medical therapy including statins is necessary. A cardiac evaluation is needed if it has been done within 5 years. An evaluation should be performed within 1 to 2 weeks of iliac intervention to assess for resolution of rest pain and need for additional intervention. If rest pain is resolved, then imaging at 3, 6, and 12 months and annually (or in the event of recurrent symptoms) is reasonable. We tend to use arterial duplex ultrasound for imaging, although CTA can be considered if the patient has recurrent symptoms or a physical examination suggests iliac restenosis.

Figure 3. Retrograde recanalization of the left CIA and left EIA. 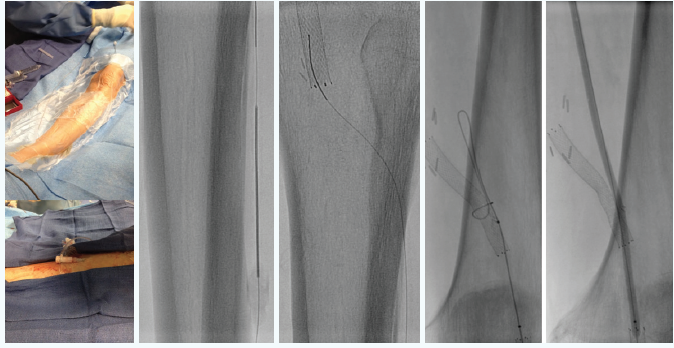 Figure 4. AT access and retrograde recanalization of the native left SFA through the occluded femoropopliteal stent graft. 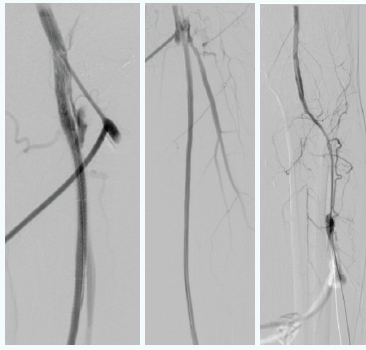 Ipsilateral retrograde femoral access was obtained from the left CFA, and the left EIA and CFA were crossed with a 0.035-inch Glidewire and stented with an 8- X 120-mm self-expanding stent (Figure 3). We then obtained access from the left AT using ultrasound and angiographic guidance and placed a short 6-F sheath. A Glidewire was used to cross into the popliteal stent through the occluded femoropopliteal stent graft (Figure 4). PTA through the stent was performed to disrupt the struts with a 5- X 120-mm PTA balloon, and the occluded native SFA was recanalized (Figure 5). The left SFA and popliteal artery were treated with overlapping self-expanding stents. The sheath was removed from the AT, and compression was applied with hand pressure. The patient experienced relief of all symptoms and rest pain.