The primary goal of revascularization has classically been to achieve uninterrupted straight line pulsatile flow to the foot through any patent tibial artery.5 However, successful revascularization by this definition may not completely ensure wound healing or limb salvage.6,7 Because the foot has six distinct vascular “angiosomes” supplied by the tibial circulation, wound persistence after revascularization may be due to incomplete restoration of flow in the necessary vascular territory.7 Angiosome-guided revascularization has been described with the intention to directly target the specific arterial supply to the ischemic pedal tissue.8-10

Although there have been several studies providing evidence for the efficacy of angiosome-guided revascularization,4,8-12 others have shown little to no benefit of this approach.13,14 Potential reasons for this discordance can be explained by anatomic variations in pedal arterial supply, absent or incomplete pedal loop integrity, and the recognition that wounds occur in “watershed” distributions with more than one vascular supply.15-18

Catheter-directed angiography and endovascular intervention are generally regarded as first-line therapy in CLI. The angiographosome concept is the targeted revascularization of tibial and pedal arteries based on their direct angiographic demonstration of wound supply at the time of intervention. Unlike angiosome-mediated treatment, which is based on the theoretical arterial supply to each region of the foot, angiographosome-directed revascularization targets the restoration of flow in a real-time fashion to the visualized arterial supply to ischemic tissue, whether through normal arterial pathways, variant anatomy, or collateral arcades. Furthermore, a single patent tibial vessel may only supply a portion of the wound or ischemic tissues, with direct injection or revascularization of a second vessel providing the remaining angiographosome to the wound bed. In patients with occluded and nonreconstructible major arterial segments, angiographosome-directed revascularization might also be achieved by reestablishing flow through aberrant pathways and/or using plantar pedal loop angioplasty to restore an intact pedal arch.

Principles and Techniques of Angiographosome-Directed Revascularization

Optimal performance of angiographosome-directed revascularization requires adherence to several dedicated principles (see the Principles and Techniques of Angiographosome-Directed Revascularization sidebar). With the utilization of both anterior and lateral plane angiography to gain visual perspective, as well as selective distal injection and liberal use of intra-arterial vasodilators (eg, nifedipine, nitroglycerin), the interventionalist may ensure adequate perfusion to the target ischemic area. This may often be demonstrated by the appearance or improvement in a wound blush, which has been correlated with significantly higher perfusion pressures and improved rates of limb salvage.19 It is also helpful for the interventionalist to place a small metallic object or “BB” to identify the exact location of the wound or ischemic tissue on the skin.

Methylene blue “angiography” or perfusion assessment is a modification of indocyanine green angiography previously described by Igari et al.20 In this technique, 2 to 3 mL of methylene blue is selectively injected into tibial arterial segments to identify the pattern of skin staining and determine whether the injected artery provides partial or complete wound perfusion (Figure 1). 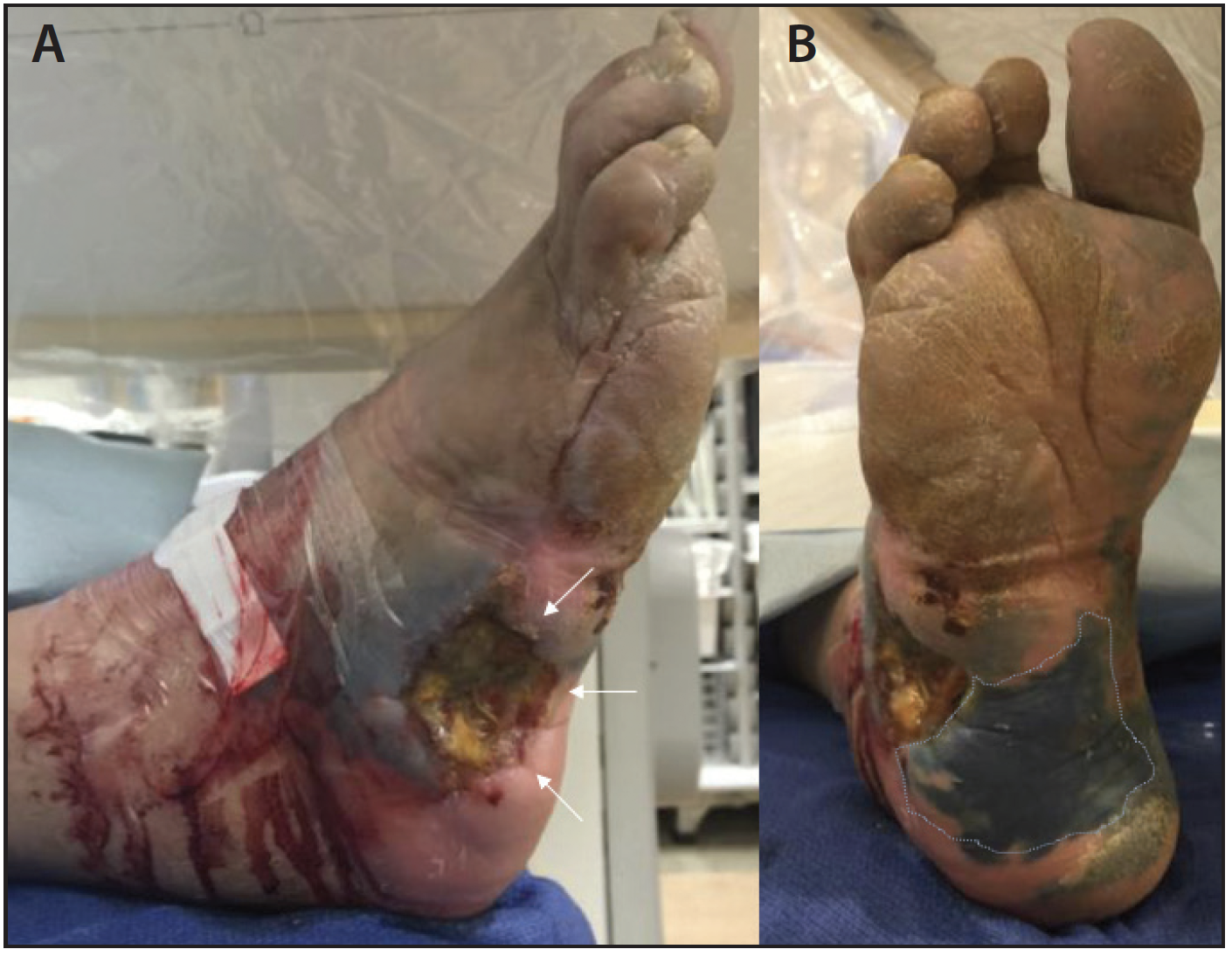 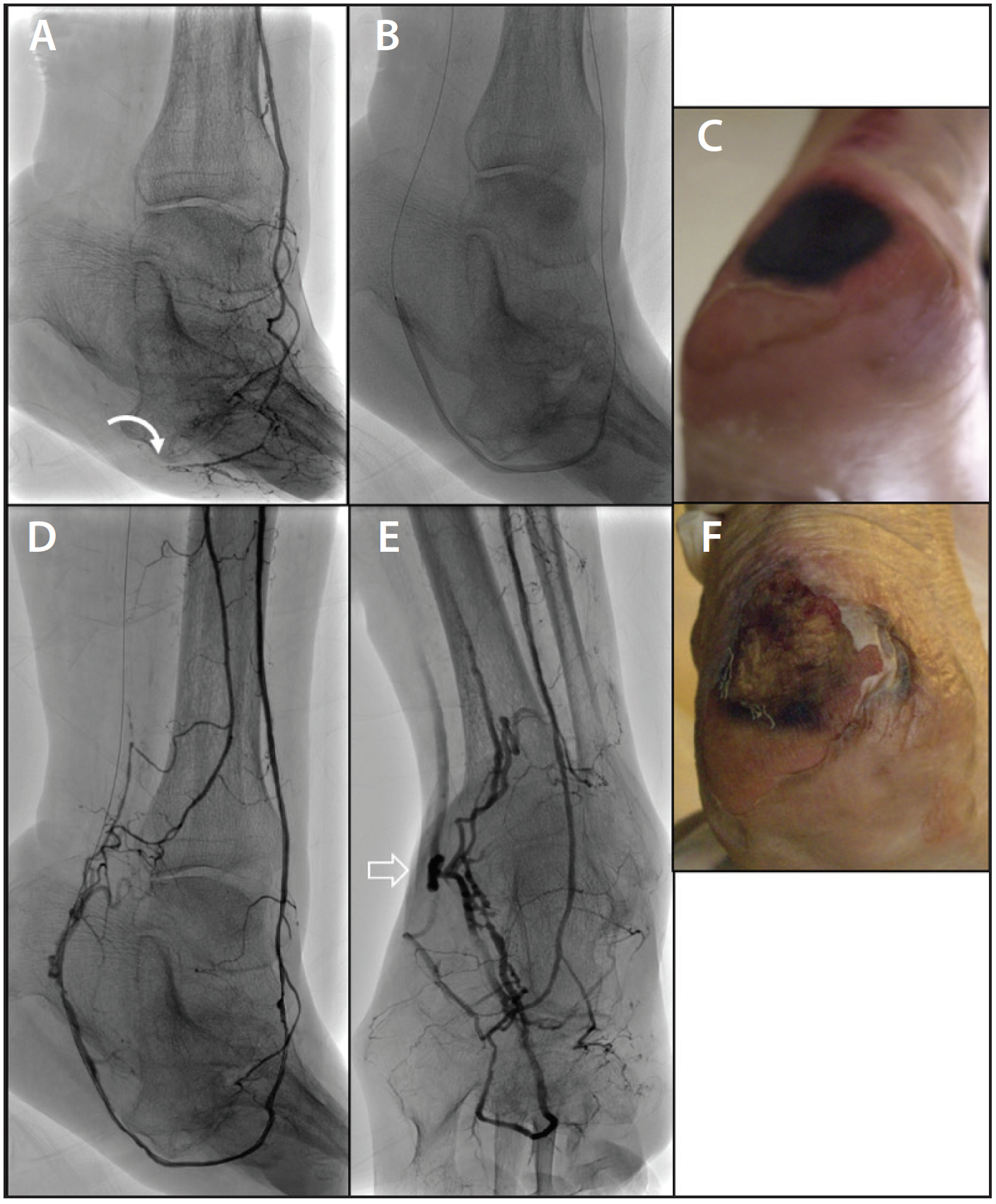 Figure 2. Plantar-pedal arch angiographosome-mediated revascularization in a patient with calcaneal gangrene. An initial angiogram (A) showed a patent anterior tibial and dorsalis pedis artery with no visualization of the peroneal artery or posterior tibial artery and occlusion of the lateral plantar artery (curved arrow), which appeared angiographically to be directed toward the heel. Based on this finding, plantar-pedal loop angioplasty was performed (B) to optimize flow to the baseline focal calcaneal wound (C). After revascularization, lateral (D) and anteroposterior (E) angiograms demonstrated straight line calcaneal flow with a small venous fistula (open arrow). Wound improvement was noted 2 weeks later (F).

We propose four patterns of angiographosome-directed revascularization: direct flow, pedal loop flow, watershed flow, and variant flow. Each of these patterns are further elucidated in the following sections.

Direct flow revascularization is endovascular therapy in a typical angiosome-mediated fashion. In these cases, there are no nonreconstructible tibial segments and no demonstration of direct flow to the ischemic wound downstream from the occluded or stenotic tibiopedal artery being treated. The tibial artery or arteries anticipated by the angiosome model are the actual predominant supply to the patients’ wounds and are amenable to endovascular therapy or surgical bypass. Therefore, direct flow revascularization represents current practice and an improvement compared to revascularization to any available distal target.

In the pedal loop flow angiographosome pattern, there is revascularization of a tibial vessel that does not directly supply the anatomic distribution of the foot wound by the traditional angiosome model but is seen at the time of angiography to provide wound flow and perfusion through the pedal loop. The plantar-pedal loop is a direct communication between the distal anterior tibial and posterior tibial arteries and serves to connect the dorsal and plantar arterial flow. As the dorsalis pedis descends downward to connect with the lateral plantar artery and form the plantar-pedal loop, this pathway serves to unify all the major vascular territories of the foot, allowing both direct and collateral perfusion to areas that may have compromised vascular supply.18 Pedal loop angiographosome revascularization takes advantage of potentially robust collateral wound perfusion through the plantar-pedal arch branches (Figure 2). Several studies have identified pedal arch integrity as an important angiographic predictor of wound healing,21,22 although this benefit may be lost in the presence of severe microcirculatory disturbance.23 However, the caliber and flow through the pedal arch can be evaluated at the time of angiography to determine if indirect revascularization through the pedal loop angiographosome might be able to produce clinical success comparable to that of direct revascularization. Techniques for pedal-plantar loop intervention have previously been described.24

Watershed vascular distribution refers to the tissue volumes supplied by the terminal branches of multiple larger arteries and therefore reflect areas susceptible to ischemia with either macro- or microcirculatory disturbance. Although the vascular territories of the calcaneus and hallux are recognized watershed areas, our experience suggests that nearly all wounds are watershed (Figure 3). This may be an acquired phenomenon. The relatively common recognition of nonhealing wounds occurring with a patent major artery supply supports the concept that pathologic changes related to pedal atherosclerosis may alter potential perfusion patterns to distal tissue. Watershed supply may not always be apparent (Figure 4) but reinforces a strategy of aggressive angiographosome-directed revascularization to maximize wound blush and perfusion. Methylene blue angiography or transcutaneous partial oxygen tension measurements may be useful in determining if there is residual partial ischemia when angiography shows apparent adequate flow to a wound. 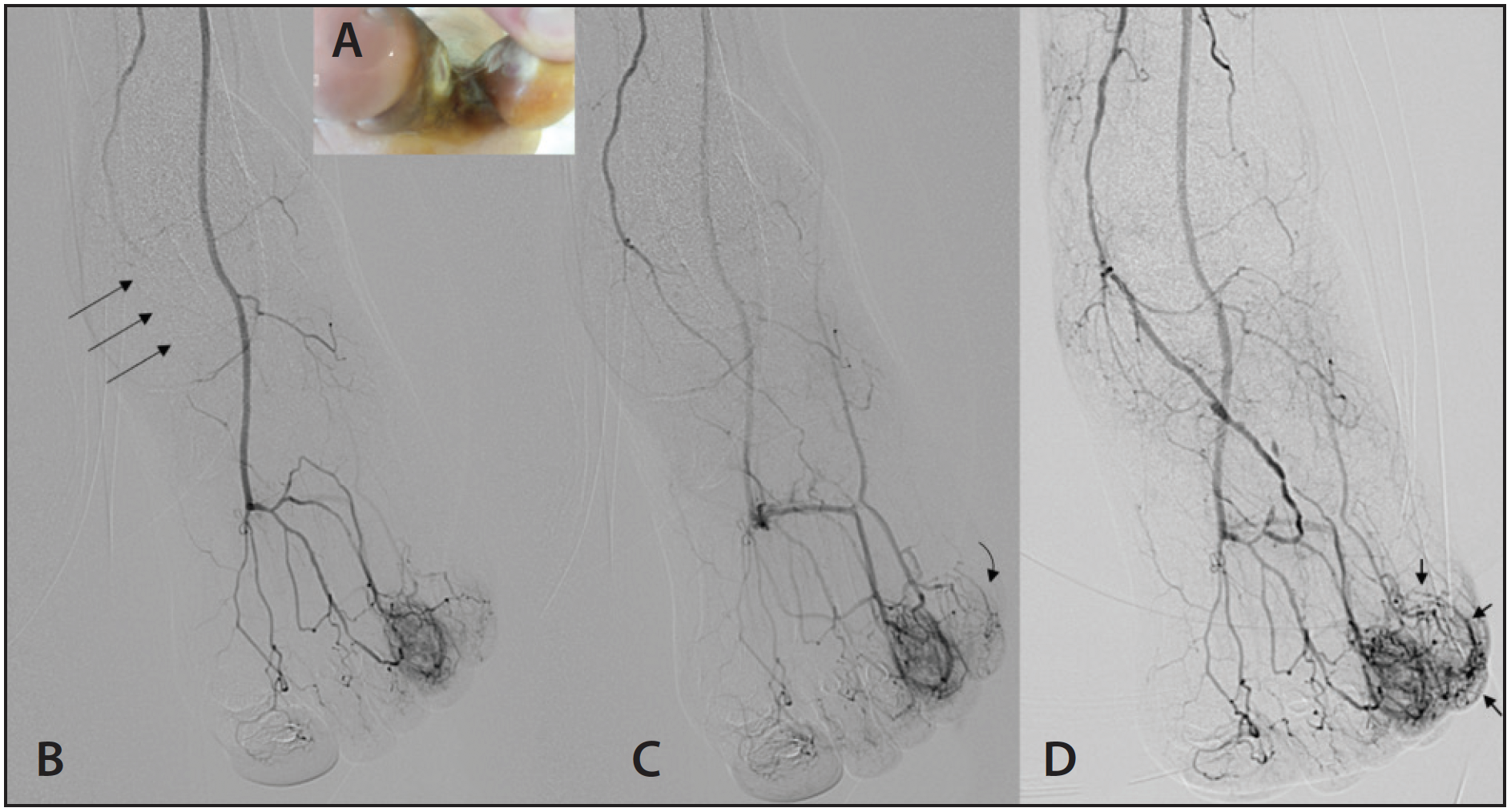 Figure 4. Unrecognized watershed perfusion to an intertriginous foot ulcer. A patient with a palpable dorsalis pedis pulse presented with a 4-week nonhealing pressure ulcer between the 4th and 5th toes (A). An antegrade femoral angiogram (B) showed that the anterior tibial artery provided a reasonable wound blush, although there was nonfilling of the plantar branches of the posterior tibial artery (arrows). On later imaging (C), there was delayed filling of the medial plantar artery and visualization of a wound artery not seen earlier (curved arrow). After plantar-pedal loop angioplasty (D), there was restoration of the pedal arch and a markedly enhanced wound blush (short arrows). The patient had complete wound resolution 4 weeks later.

There can be great variation in the pedal arterial supply in both normal and diseased states. In an anatomic study of the blood supply to the dorsum of the foot and ankle, four different arterial variations of the anterior tibial-dorsalis pedis axis were identified in disease-free patients, occurring in nearly 5% of cases.18 Despite very clear descriptions of the pedal circulation on angiography, our experience suggests that below-the-ankle variations (or acquired alterations) in digital circulation frequently occur (Figure 5 and Figure 6). Angiographosome-directed revascularization toward variant flow patterns in these cases may effectively resolve wounds. Revascularization of a major tibial artery in a patient with angiographically demonstrated variant anatomy (eg, peroneal angioplasty when there is peroneal continuation to the posterior tibial artery supplying a wound) is another pattern of variant flow angiographosome-mediated treatment (Figure 7). 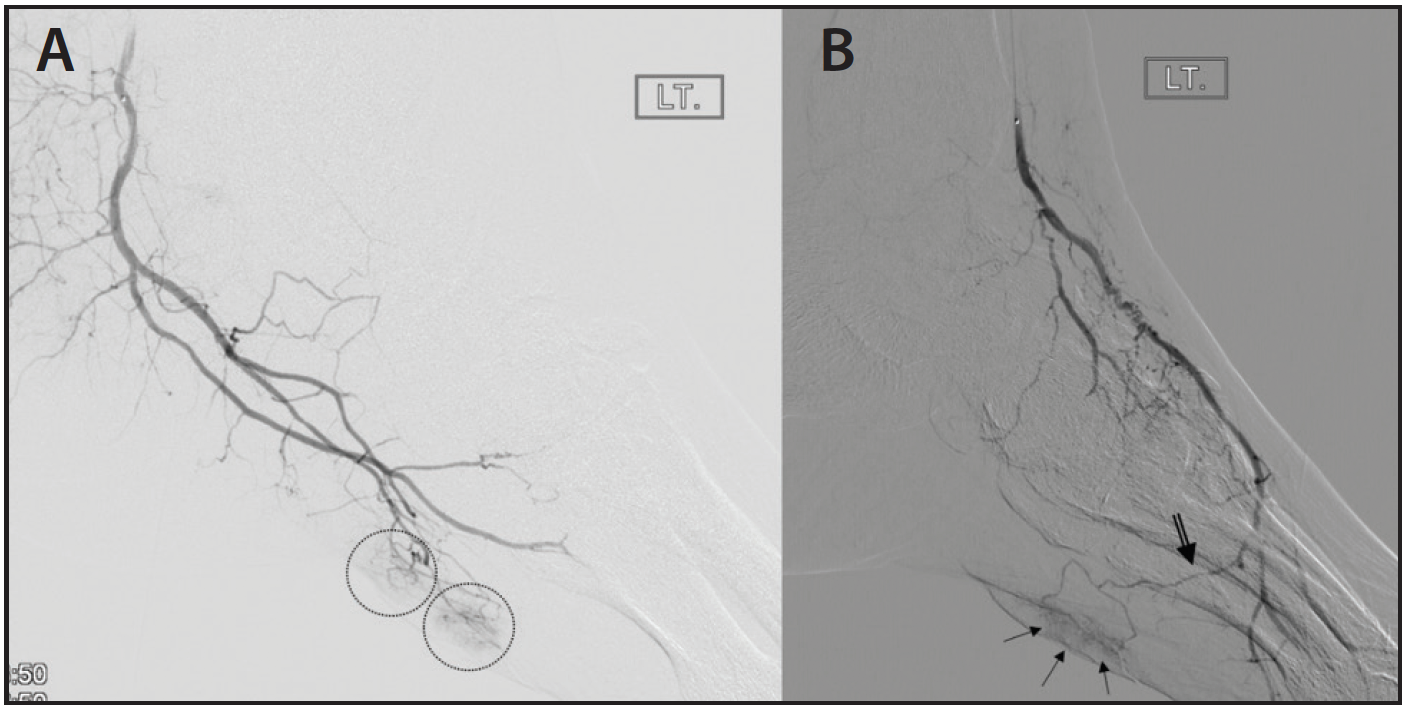 Figure 6. Variant angiographic supply to a lateral foot. A methylene blue angiogram (A) showing perfusion surrounding the wound including the dorsal margin (open arrow) in the typical distribution of the anterior tibial artery. Selective lateral (B) and anteroposterior (C) angiograms of the posterior tibial artery showing variant arcuate arterial supply to this portion of the wound (short arrows). 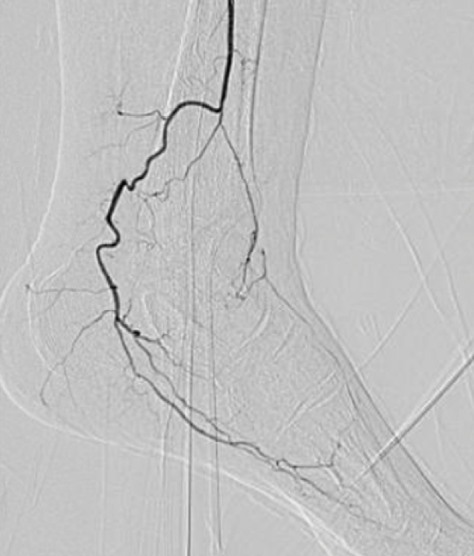 Figure 7. Kawarada type 3A variant18 with peroneal continuation to the common as well as medial and lateral plantar artery distribution.

CLI interventions need to advance to a higher level of diagnostic and strategic rigor to optimize limb preservation. Angiographic demonstration of lesion perfusion is a critical component of successful endovascular revascularization. Angiographosome-directed revascularization based on actual observed patterns of wound perfusion at the time of endovascular therapy or preoperative angiography should be performed whenever possible to optimize targets for wound perfusion and healing.