The Luminor DCB is available under CE Mark only and is not approved in the United States.

Over the past decade, drug-coated balloons (DCBs) have emerged as an exciting technology developed to overcome the limitations of standard balloon angioplasty and stenting. DCBs inhibit neointimal growth of vascular smooth muscle cells to prevent restenosis, without leaving anything permanent in the vessel, and their clinical efficacy and safety have been demonstrated in several trials. The coating technologies have rapidly evolved since the first product was launched, and newer-generation DCBs such as the Luminor DCB (iVascular) are demonstrating better outcomes as compared with previous-generation DCBs.

The Luminor DCB is coated with a homogeneous 80/20 combination of paclitaxel (PTX), with a dose of 3 µg/mm2 balloon surface and liquid excipient. PTX is used because of its particular lipophilic properties that favor tissue diffusion. However, not all DCBs are equivalent. Beyond the differences related to the balloon platforms, the technique of impregnation, the physicochemical structure of PTX, and the combination of PTX with the excipient are differentiating elements that influence the clinical efficacy. Figure 1. TransferTech™ coating nanotechnology. This coating has been engineered to release a high dose of molecules during a short inflation time (30–60 seconds).

Luminor is based on iVascular’s proprietary coating nanotechnology, TransferTech™ (Figure 1). The PTX in a microcrystalline structure, together with the excipient, is spread on the balloon by ultrasound spray pulse. The balloon surface is covered with multiple and independent nanodrop layers. This unique and innovative technology provides a flexible coating, adapting to the balloon movement. Moreover, a maximum of 10% of PTX particles may be washed off during navigation,* which is a significant improvement compared to other DCB coating technologies.

Proof-of-concept studies are used to demonstrate the efficacy and safety of a DCB. In this context, the outcomes of the Luminor DCB in TASC A and B lesions in the superficial femoral artery (SFA) and popliteal artery have been evaluated in the EFFPAC randomized controlled trial (RCT). The TINTIN trial, a study evaluating combination therapy with the Luminor DCB and iVolution self-expanding stent (iVascular) in TASC C and D SFA lesions, is currently enrolling patients. These trials are supported by real-world evidence from the LUMINOR registry, which includes SFA and below-the-knee (BTK) lesions. To complete Luminor’s clinical program, a BTK trial and various international all-comers registries will follow.

The investigator-initiated, prospective, multicenter, randomized controlled EFFPAC trial aims to evaluate the Luminor PTX-coated balloon catheter in stenotic or occlusive lesions (length ≤ 15 cm) in the SFA and popliteal artery compared to noncoated plain old balloon angioplasty (POBA) catheter. The objective is to assess the safety and efficacy of the Luminor DCB. In total, 171 patients were enrolled and randomized 1:1 to POBA (n = 86) or the Luminor DCB (n = 85) at 11 German study centers.

Baseline characteristics were typical for peripheral artery disease patients (mean age, 68 years in both groups). Most patients had severe claudication and a mean lesion length of approximately 6 cm. The total occlusion rate was 20.2% in the Luminor arm versus 25.6% in the POBA arm. Calcification was mild to moderate in both arms. Vessel preparation via predilatation was performed in 100% of Luminor cases and 98.8% of POBA cases. Dissection rates were approximately 40%, and the stent rate was relatively low in both groups.

The Luminor PTX-coated balloon catheter was found to be highly clinically effective and safe in inhibiting restenosis compared to POBA. The innovative coating technology is not only superior in patency, LLL, and TLR but also in the improvement of Rutherford class. These results allow direct comparison to other already-completed RCTs, applying PTX-coated DCBs from different manufacturers in the same target vessels. The EFFPAC results were the highest among those RCTs after 12 months.

This real-world experience trial with the Luminor DCB is led by Prof. Vincent Riambau from Hospital Clínic Barcelona. The LUMINOR registry is a physician-initiated, prospective, observational, multicenter clinical trial designed to analyze the effectiveness and safety of the Luminor DCB in patients with Rutherford class 2–5 limb ischemia. De novo occlusive lesions and restenosis of the below-the-groin arteries as well as in-stent stenosis in symptomatic patients (Rutherford class 2–5) were included.

The objectives were to demonstrate the effectiveness of the Luminor DCB in terms of primary patency of the treated arteries in the SFA or BTK at 12 months as well as freedom from the major adverse events (all-cause mortality, major amputation, and/or TLR). All endpoints were assessed postprocedure at 30 days and 6 and 12 months. Technical early success was defined as residual stenosis < 30% after DCB application.

At 1-year follow-up, the BTK subgroup demonstrated outstanding preliminary outcomes. Primary patency was 88.3%, freedom from TLR was 94.8%, 1-year survival was 86%, and freedom from major amputation was 85%.

This real-world registry is providing highly satisfactory initial clinical data for BTK obstructive lesions in terms of survival, freedom from amputation, patency, and absence of reintervention.

The role of DCBs for BTK applications is yet to be fully proven, but the BTK outcomes from the LUMINOR registry and clinical experience demonstrate that the Luminor DCB is a promising treatment for BTK arteries. In complex cases, Luminor has shown good results, as demonstrated in the case by Dr. Roberto Ferraresi from Humanitas Gavazzeni in Bergamo, Italy.

A 50-year-old man with type 1 diabetes mellitus diagnosed 37 years ago and on hemodialysis presented with rest pain and a chronic ulcer of the first toe. A baseline angiographic study revealed diffuse disease of the BTK and foot vessels, with total occlusion of the tibioperoneal trunk, posterior tibial artery, and distal anterior tibial artery (Figure 2).

We treated the tibioperoneal trunk, the proximal peroneal artery, and the distal anterior tibial artery. The final treatment was the use of a 3- X 200-mm Luminor DCB inflated at 14 atm, which yielded good results (Figure 3). We decided not to treat the foot vessel, hoping that the vascular distribution system of the forefoot, although diseased, was sufficient to promote healing.

Despite revascularization, the patient did not heal and presented to our center 5 months later for a new evaluation. The new angiographic study revealed good patency of the treated segment, with positive remodeling of tibioperoneal trunk and anterior tibial artery (Figure 4). Restenosis was not the reason the patient did not heal, because the DCB treatment was able to maintain patency, but rather, direct blood flow to the wound was absent. The dorsalis pedis artery was totally occluded and calcified, and the metatarsal artery feeding the first and second toe received only very thin collaterals (Figure 5). In the initial procedure, we did not consider the wound-related artery concept.

The treatment strategy in a critical limb ischemia patient must always be comprehensive, including the wound, the type of arterial disease (calcification), and the obstructive pattern. We decided to try to open the dorsalis pedis artery. We crossed it with a 0.014-inch guidewire, predilated it with a 1.5-mm balloon, and performed a final treatment with a 2- X 120-mm Luminor DCB inflated at 14 atm (Figure 6). The final result was good, with direct blood flow to the wound-related artery (Figure 7).

Such an extreme case demonstrates the importance of pursuing angiosome-oriented revascularization in critical limb ischemia patients with diffuse disease of the foot vessels. It also underlines how the Luminor DCB was able to cross small calcified foot vessels and demonstrated patency in the treated arteries 5 months after initial treatment. 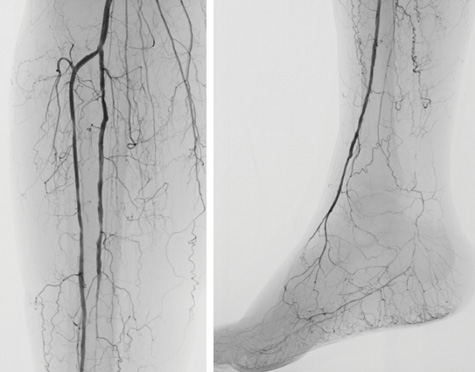 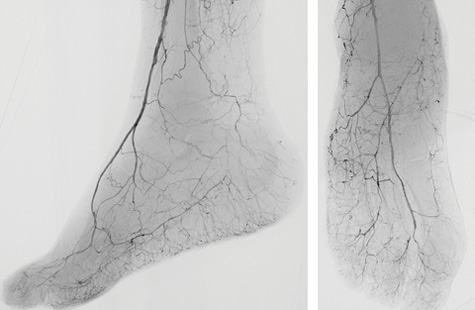 The efficacy and safety of the Luminor DCB have been demonstrated, with exceptional outcomes seen in the EFFPAC trial, LUMINOR registry, and real-world experience in SFA and BTK arteries. The Luminor DCB achieves better outcomes than other available DCBs thanks to its unique and innovative coating technology, TransferTech™, proving that coating technology does matter.

*Data on file at iVascular S.L.U.

Harmonize Your Lab With Philips SymphonySuite