Most patients with chronic limb-threatening ischemia (CLTI) have multisegmental disease that involves the infrapopliteal arteries.1 Therefore, the primary objective of infrapopliteal revascularization is to relieve limb-threatening conditions.2 Developments in endovascular therapy (EVT) have raised expectations for improvement in patients with the traditionally poor prognosis of CLTI associated with infrapopliteal lesions. In particular, primary angioplasty is now widely used for the treatment of infrapopliteal lesions in CLTI patients. Results from our SPINACH registry revealed no significant difference in 3-year amputation-free survival (AFS) between patients treated with EVT and those treated with surgical reconstruction.3 Based on the latest guidelines and evidence, EVT is currently the preferred therapeutic modality for treating patients with CLTI due to infrapopliteal lesions because of the favorable clinical outcomes and lower procedural costs of this approach compared with those of bypass surgery.

Common features of infrapopliteal lesions in CLTI patients include long and diffuse lesions, calcified lesions, totally occluded lesions, and below-the-ankle (BTA) lesions.4 These features make it extremely challenging to achieve optimal initial procedural success and long-term durability. Despite the emergence of several specific below-the-knee (BTK) devices in clinical settings, plain old balloon angioplasty (POBA) remains the standard treatment modality used for BTK revascularization. A recent randomized controlled trial did not demonstrate the safety and effectiveness of drug-coated balloons relative to POBA for BTK lesions.5 On the other hand, the use of drug-eluting stents (DESs) in the infrapopliteal artery, which is already generally approved for coronary arteries, was shown to be superior to POBA with respect to long-term durability.6 However, device length of the currently available DESs limit their use in the infrapopliteal arteries, and the routine use of DESs is impractical because several stents would be needed for complete coverage of these lesions. In clinical settings, due to suboptimal restenosis rates for infrapopliteal lesions after traditional POBA,7 repeat angioplasty is occasionally performed prior to complete ulcer healing or the recurrence of rest pain. Additional reliable devices are needed to achieve better outcomes in the treatment of infrapopliteal lesions.

Previous studies of CLTI revascularization have shown conflicting results with respect to the utility of the angiosome concept.8-13 Certain investigations have revealed positive evidence for this concept, whereas other studies have found no such evidence. A review of these studies8-13 indicated that results have varied depending on the following factors: (1) prevalence of diabetes mellitus and renal insufficiency, (2) frequency of severe wound status (eg, wound infection or high-risk WIfI [Wound, Ischemia, and foot Infection] class), and (3) differences in outcome measurements, which may include AFS, limb salvage, or wound healing. If the prevalence of diabetes mellitus and renal insufficiency was low (vascular disease was not severe) and the endpoint was AFS or a similar criterion for which a range of factors (such as nutritional status and cardiac function, among others) could have an influence, the impact of the angiosome concept could be attenuated. On the other hand, if a study included a larger number of wounds that required direct revascularization due to advanced vascular disease, the angiosome concept would be more significant if wound healing was used as an endpoint.

In contrast to EVT, surgical reconstruction achieves completely sufficient blood flow. Therefore, the angiosome concept has a relatively small impact in this setting; even indirect revascularization during bypass surgery may provide sufficient blood flow to an ischemic ulcer. However, the angiosome concept could still be the basis for an important and fundamental strategy, especially for endovascular approaches, because technologic innovations in the measurement of tissue microperfusion will not be directly linked to therapeutic effects. EVT is generally inferior to surgical reconstruction with respect to hemodynamic improvement in the initial phase and durability in the chronic phase. Therefore, the strategy of targeting vessels that supply the greatest quantities of blood to wound sites is much more important in EVT. Angiosome-based strategies would potentially shorten time to wound healing and should therefore be attempted.

There are many types of 0.014-inch wires because there is a wide variety of BTK and BTA lesions. The following factors are particularly important when choosing a 0.014-inch wire: (1) whether the lesion is a stenosis or an occlusion, (2) lesion length ≥ 15 cm or < 15 cm, (3) the tortuosity of the lesion, and (4) the presence and distribution of vessel calcification. The severity of these factors should be considered prior to the selection of an appropriate wire. Strategies are generally adopted based on each of the previously mentioned factors; however, the recanalization strategy will also depend on the target vessel.

As we show in the cases presented in this article, several approaches can be used in a revascularization strategy. Furthermore, risk stratification for procedural success based on anatomic features should be individually conducted before wire crossing is started.

The use of a soft wire is recommended for treating stenoses. The shape of the wire tip depends on the morphology and diameter of the stenosed region in each BTK and BTA artery. Because the luminal diameters of the tibial and fibular arteries are typically 2 to 3 mm, the selection and tracking of a target vessel is attempted with the curve set at a point that is 2 to 3 mm from the tip.

The initial angiogram showed a high-grade stenosis in the posterior tibial artery (PTA) (A). A 0.014-inch Cruise hydrophilic guidewire (Asahi Intecc Co Ltd.) accompanied by a Crusade double-lumen catheter (Kaneka Medix Corporation) were advanced to the severe stenosis with an angled ostium in the PTA in an antegrade fashion (B). We subsequently dilated a 2- X 220-mm Coyote balloon (Boston Scientific Corporation) at 12 atm for 3 minutes (C). The severe stenosis with angled ostium in the PTA was successfully recanalized from the origin to the pedal arch (D).

SHORT OCCLUSION WITH NO OR MILD CALCIFICATION

Although employing a soft wire may be a better approach, the use of an Asahi Gladius wire (Asahi Intecc USA, Inc.) has become more popular. This type of wire is preshaped and is technically suited for tracking microchannels within a short-segment chronic total occlusion (CTO).

Attempts should be made to cross the lesion with the appropriate route for the wire predicted based on calcification identified via fluoroscopy as well as tip injection using a microcatheter. A CTO wire with a stiff tip is particularly desirable for a CTO with short calcification, but there is a relatively high risk for perforation. Although procedures employing a biplane system can be effective, caution is necessary when using a CTO wire.

Case 3: Short-Segment CTO With Calcification in the Anterior Tibial Artery

Wire selection depends on the strategy that is chosen, including whether an intraluminal or subintimal approach is used. Because it is difficult to maintain intraluminal tracking over a long distance, it is generally better to cross the lesion using the loop wire technique with a bidirectional approach. We often attempt recanalization of a CTO by intentionally creating a loop in an Asahi Regalia wire (Asahi Intecc USA, Inc.).

The initial angiogram showed a long-segment CTO without calcification in both the ATA and the PTA (A). Tip injection from a microcatheter showed the stump of the PTA ostium, suggesting the appropriate approach for successful recanalization (B). A knuckle wire technique was used in which a 0.014-inch Cruise guidewire accompanied by a 4.2-F CXI support catheter (Cook Medical) was advanced to the CTO site in the ATA in an antegrade fashion (C). A 0.014-inch Asahi Gladius guidewire successfully reached the distal true lumen in the pedal arch (D). Both the ATA and the PTA were subsequently dilated with a 3- X 300-mm Ultraverse balloon at 8 atm for 3 minutes (E). The long-segment CTO without calcification was successfully recanalized from the origin to the pedal arch in both the ATA and the PTA (F). It is recommended to choose a wire based on one’s capabilities to avoid confusion from the abundance of available wires. 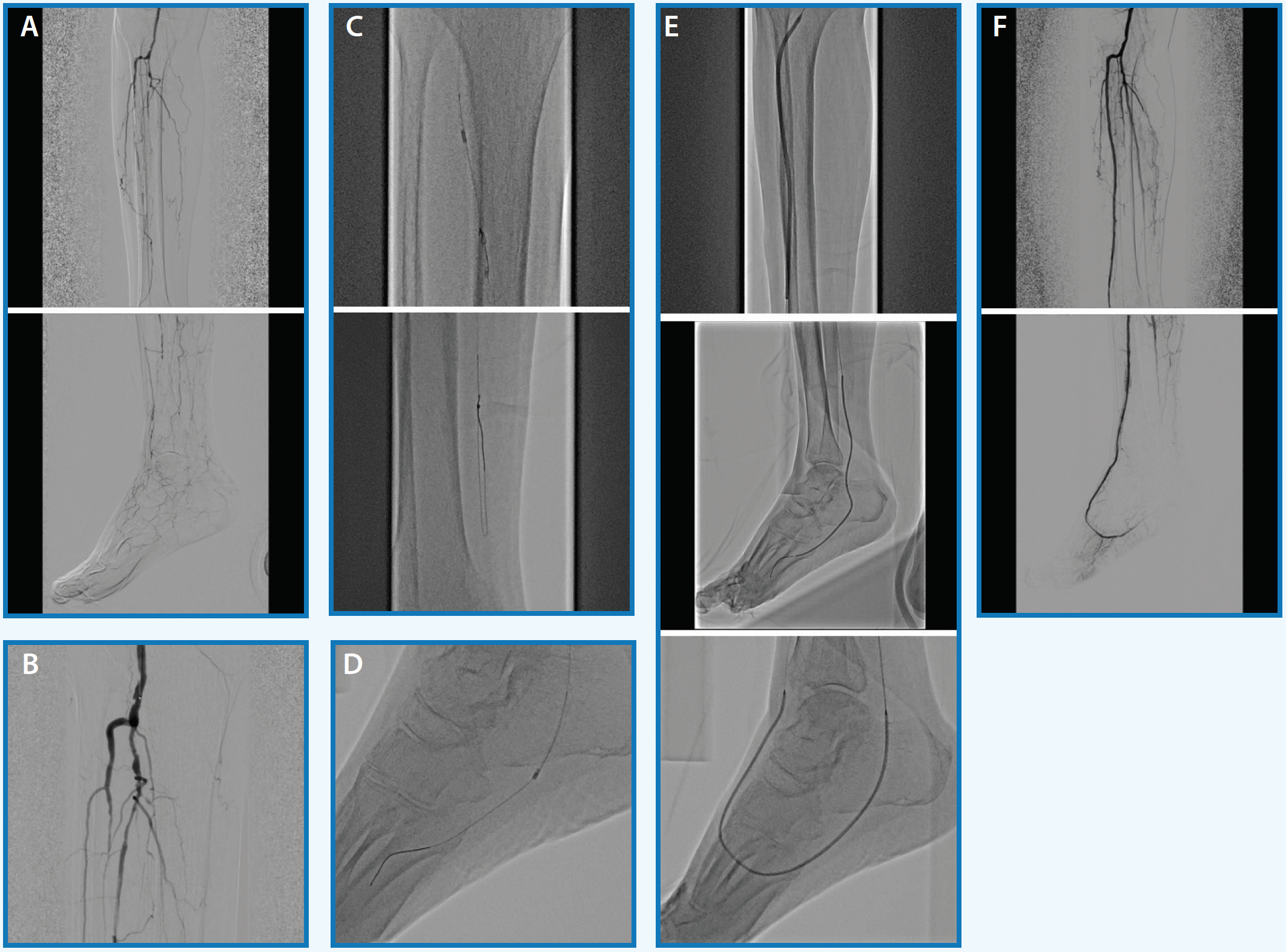 A TOTAL OCCLUSION WITH SEVERE CALCIFICATION

In the infrapopliteal region, the most challenging type of lesion is a total occlusion with severe calcification. A 0.014-inch CTO wire is only useful when lesions are complicated with a short-segment calcified CTO. If a CTO wire is adopted for recanalization in a long-segment calcified CTO, there are much higher risks of wire-associated complications, including perforation and dissection. Therefore, an intimal tracking strategy involving the use of a 0.014-inch CTO wire is unrealistic for a long-segment calcified CTO. When a total occlusion with severe calcification is encountered in a clinical setting, we strongly suggest that intentional subintimal tracking using a bidirectional knuckle wire technique with a 0.035-inch wire be considered for recanalization.