Predictions for Transradial Access Capabilities in the Near Future

A discussion of available technology for transradial access in patients with aortoiliac and infrainguinal disease, current limitations, and opportunities for the future.

Disability from peripheral artery disease (PAD) continues to increase each year with growing prevalence of risk factors, including but not limited to tobacco use, diabetes, hypertension, and hypercholesterolemia.1 Although the majority of patients with PAD present with claudication symptoms, approximately 2% of patients may initially present with critical limb ischemia.2 Although medical control of modifiable risk factors and adherence to a structured exercise regimen are widely accepted as first-line treatment to slow disease progression, the majority of patients with critical limb ischemia require endovascular or surgical revascularization to prevent limb loss. Many patients with PAD are high-risk surgical candidates, and endovascular intervention has increasingly become the first line of therapy for the invasive management of PAD.

Although traditional transfemoral access (TFA) has allowed for introduction of larger devices (eg, large balloons and stent grafts for aortic aneurysms), transradial access (TRA) has shown clear advantages for procedures that do not require large-sized tools. The randomized controlled MATRIX study demonstrated significantly fewer net adverse clinical events with TRA (n = 4,197) than with TFA (n = 4,207) in patients with the entire spectrum of acute coronary syndrome undergoing invasive management (15.2% vs 17.2%; P = .01).3 Although TFA remains the standard access site in the management of PAD, the evaluation of currently available technology for treatment of PAD via TRA is vital to improving outcomes and minimizing adverse events.

CHALLENGES TO TREATMENT WITH TRA

A lack of devices that are an adequate length has traditionally limited the treatment of PAD, and infrainguinal disease in particular, via TRA. Although brachial access had been considered to reduce device length requirements, it is less frequently used due to the risk of vessel and nerve complications.4 Combined radial and pedal access has shown favorable outcomes in treating infrainguinal lesions (n = 37; including TransAtlantic Inter-Society Consensus [TASC] D lesions), but notable risk still exists in the cannulation of pedal vessels due to significant atherosclerotic burden and poor collateral circulation.5,6

There is significant variability in the marketing of catheter and sheath systems, which can lead to confusion regarding device compatibility. The currently available 6.5- and 7.5-F, 100-cm Sheathless Eaucath systems (slightly larger inner diameter vs 4- and 5-F standard sheaths) are marketed as catheters, and thus the sizing refers to the outer diameter, despite being used in practice as sheaths. Therefore, to accommodate a 5-F–compatible stent or balloon, a 7.5-F Asahi Sheathless Eaucath (inner diameter, 2.06 mm) would be required. A hydrophilic 6-F (inner diameter, 2.21 mm) Destination Slender sheath (Terumo Interventional Systems), available in 119 and 149 cm, was also recently approved for use in the United States, which will allow positioning just proximal to the treatment area and provide better support to cross difficult lesions.

Of note, TRA decreased procedural and fluoroscopy time versus TFA in infradiaphragmatic interventions that required bilateral iliac artery access (eg, prostate artery embolization), largely due to the ability to easily select either iliac artery from above the aortic bifurcation.9 This suggests a similar savings in time and radiation dose given that TRA allows operators to treat diseased segments of both extremities with a single access site.

The role of TRA in treating infrainguinal disease has been limited to the treatment of focal lesions and in-stent restenosis.10-12 In the largest study to date published on TRA to treat infrainguinal disease (n = 93) by Lorenzoni et al, TASC A through C superficial femoral artery (SFA) lesions were crossed with 90% technical success with TRA, in which they preferentially used a 8.5-F, 120-cm SheathLess PV device (Asahi Intecc Co Ltd., not available in the United States) or a 6-F, 125-cm Vista Brite Tip guiding catheter (Cordis, a Cardinal Health company).12 The lesions were treated with balloon angioplasty using a 180-cm-long shaft Pacific Plus over-the-wire (OTW) percutaneous transluminal angioplasty (PTA) balloon (Medtronic) and, if needed, a 180-cm-long, 5-F sinus-SuperFlex-518 self-expanding stent (optimed Medizinische Instrumente GmbH, not available in the USA). The widely available hydrophilic 6-F, 125-cm Vista Brite Tip guiding catheter does not provide operators with adequate support to cross TASC D SFA lesions via TRA, and this patient population was excluded from the study.12

Until recently, the longest support system available in the United States was the 110-cm reinforced Shuttle sheath (Cook Medical), which did not provide adequate support for treating the majority of SFA diseases. The recently released 6-F, 119- and 149-cm Destination Slender sheath enables sheath placement much closer to the diseased SFA segments and provides significant support for crossing lesions in the SFA.

Recently, rapid exchange balloons have been made available to improve handling of the long shaft equipment required for TRA. For example, the 180-cm-long shaft Pacific Plus OTW PTA balloon requires a minimum 360-cm guidewire to facilitate safe exchange and can be cumbersome to handle. The recently released 200-cm Metacross rapid exchange balloon (Terumo Interventional Systems) allows operators to use readily available 260- and 300-cm guidewires versus the longer 350- and 450-cm guidewires required for OTW balloons. The 200-cm-long, 0.014-inch Ultraverse RX rapid exchange angioplasty balloon (BD Interventional) is also available for operators to perform angioplasty on vessels up to the ankle in select patients with adequate sheath support. Additionally, the Diamondback atherectomy system (Cardiovascular Systems, Inc.) was recently made available with a 200-cm working length on a 5-F platform that permits infrapopliteal atherectomy.

Operators lack significant bailout options during lower extremity interventions utilizing TRA. No covered stent options are available on a 6-F platform that reach the required diameter to stent vessels in the aortoiliac region successfully via TRA, necessitating conversion to TFA in the event of vessel dissection or rupture.

Currently in the United States, there are no stents with a shaft length long enough to treat SFA disease via TRA. We frequently use the 150-cm-long EverFlex self-expanding stent (Medtronic) in our practice; however, we are frequently limited to treating proximal/mid SFA lesions in the majority of patients. A 200-cm-long 5-F Misago self-expanding stent (Terumo Interventional Systems) would allow greater patient eligibility for treatment via TRA and was approved for use in the United States; however, it is not currently available. The low-profile, 4-F–compatible Pulsar-18 self-expanding stent (Biotronik) would be an excellent stent system to use for TRA; however, it is only available in a 135-cm shaft length and thus does not have the reach to treat infrainguinal disease.

The inability to provide synergistic debulking atherectomy and drug-coated balloon (DCB) angioplasty via TRA to treat infrainguinal disease is a significant unmet need. DCBs have been shown to be superior to PTA in preventing femoropopliteal restenosis.13 Although the 5-F–compatible Lutonix DCB (BD Interventional) is frequently used for infrainguinal disease treatment as adjunctive therapy via TFA, it is excluded from use for TRA given its 130-cm working length.

Compared with TFA, TRA provides an alternative access site with distinct clinical and cost benefits.14 Additional devices and sheaths of increased length and size are now available (Table 1); however, there are still significant unmet needs for operators wishing to comprehensively treat the lower extremities utilizing TRA. Recognition of these needs and further development of tools for use in PAD treatment via TRA will help shift the paradigm to TRA from TFA as has been seen in other interventions. 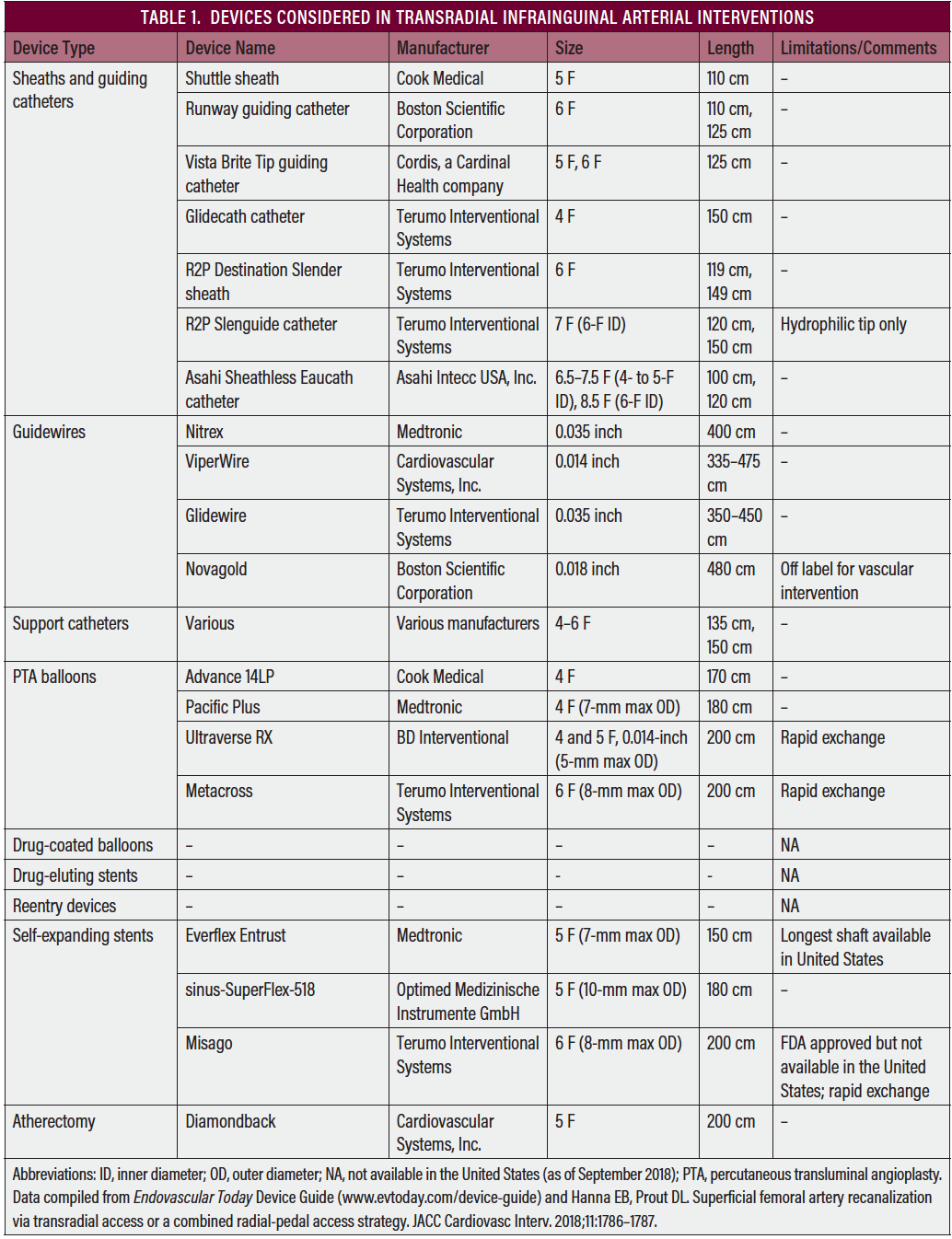