Aneurysmal sac shrinkage may not be the objective of endovascular aneurysm repair (EVAR), but it does indicate successful exclusion of the aneurysm from arterial pressure. It has been shown to be a predictor of low risk of EVAR failure during the first 5 postoperative years and has been proposed as a surrogate marker for clinical success.1-4 However, evidence for sac shrinkage as a predictor of long-term survival is of variable quality because it is a continuous variable that has been dichotomized and assessed in various ways in the literature, which makes comparison difficult.

Because variations in size occur in three dimensions (spatial variability), both sac volume and diameter are relevant parameters for defining changes in aneurysm size. Relatively small diameter shifts of 1 to 2 mm, which may otherwise be difficult to accurately measure with conventional imaging techniques, may be correlated with a significant change in aneurysm volume.5,6

It has been recently suggested that lesions display maximum growth away from maximum diameter and that a more accurate method of assessing abdominal aortic aneurysm (AAA) growth needs to be established in clinical practice that takes into account local surface growth.6 However, typically, only sac maximum diameter is used. Society for Vascular Surgery (SVS) EVAR reporting standards note that the intra- and interobserver variability of diameter measurements range between 2 mm and 5 mm or 5% and 15%; thus, a diameter change ≥ 5 mm is considered significant. A variable that complicates the analysis of AAA sac shrinkage is at what time point regression occurs, specifically if we are interested in analyzing what stent graft characteristics might contribute to it.

In contrast, other authors have defined major aneurysmal shrinkage as a reduction in aneurysmal sac diameter ≥ 10 mm compared with preoperative measurements and showed significantly reduced rates of secondary procedures and AAA rupture.8 However, even after a significant diameter reduction, the development of late type I endoleaks did occur and resulted in rapid AAA growth with the risk of rupture.

Following SVS guidelines, recent data from the Vascular Study Group of New England registry involving 1,802 EVARs showed that sac shrinkage predicted a decrease in late mortality (hazard ratio [HR], 0.6; 95% confidence interval, 0.5–0.8; P < .001) and that the 5-year survival rate was markedly lower among patients with sac expansion (68% vs 83%). The investigators concluded that the simultaneous observation of risk-adjusted lower survival in patients with sac expansion and higher survival associated with sac shrinkage suggests that sac behavior is likely a surrogate for aneurysm-related mortality.7

More evidence is available from 14,817 EVAR patients enrolled in the Vascular Quality Initiative. After 1-year follow-up, 40% of AAA sacs regressed, 35% remained stable, and 25% expanded. Sac stability and expansion were associated with higher long-term mortality compared with patients with sac shrinkage, suggesting that failure of the AAA sac regression after EVAR is associated with higher long-term mortality.9

IS SAC REDUCTION A DEVICE-RELATED PHENOMENON?

Previous results from the RATIONALE registry following 202 patients treated with Treovance® (the previous configuration of the TREO Stent Graft System [Terumo Aortic]) showed that mean (standard deviation) absolute change of aneurysm size was –6.8 (± 8.4) mm and mean relative change was –11.2%. Absolute and relative reductions in aneurysm size were statistically significant (P < .0001); 106 (54.1%) had at least 5-mm reduction and 191 (97.4%) patients had decreased or stable aneurysm sac size at last follow-up.10 Aneurysm expansion-free survival was 97.4% at 1 year. Five (2.6%) patients had an increase ≥ 5 mm.

With this in mind, aneurysms can continue to change after 1 year. A recent Canadian single-center, retrospective cohort study analyzing 1,060 EVAR patients between 1999 and 2015 found that most sac regression occurred within a 2-year period. Other predictors were identified, including age < 75 years (HR, 1.4), female sex (HR, 1.4), and aneurysm diameter > 70 mm (HR, 1.6), with statistically significant device-specific variability even in the absence of endoleak (HR for Zenith, 2.0; HR for Endurant, 1.7).4 Furthermore, although sac shrinkage may plateau 2 years after EVAR at around 60%, shrinkage in the mid to longer terms has been noted.18 Five-year outcomes from the ENGAGE registry reported 61.4% long-term sac regression with Endurant, and a single Finnish center reported 16-year follow-up with 61% regression (mean decrease, 18 mm [range, 5–41 mm]) with the Zenith device.19,20

We are currently analyzing data on sac shrinkage from patients at our center and can share some preliminary results. In a retrospective analysis of a prospectively maintained database, we identified 37 patients treated with the TREO device between May 2014 and February 2019 (until July 2018 for the analyzed subgroup); six patients were excluded (three concomitant chimney procedures, one fenestrated device, and two patients without imaging follow-up), leaving 31 patients followed for analysis. Mean maximum AAA diameter at baseline was 58.1 mm.

Figure 1. Baseline CT scan (A) and first-year follow-up (B) after performing a standard EVAR with the TREO device in a patient with AAA. Baseline CT scan was performed at 1 month after the intervention, showing an aneurysm sac transverse diameter of 6.64 cm. At 1-year follow-up, the CT scan showed a clear reduction of the aneurysm sac transverse diameter of 1.12 cm. 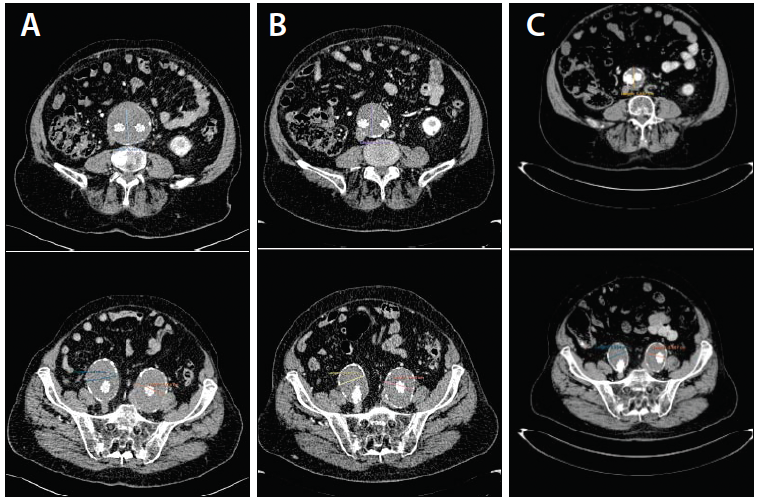 There are a number of hypotheses to explain the sac shrinkage rates reported with TREO. In the first instance, the device is available in three main body lengths (80, 100, and 120 mm), and by occupying more of the aneurysm sac, it may favor remodeling. The combination of both suprarenal and infrarenal fixation proximally (proper sealing avoids the need for EndoAnchors [Medtronic]) and the lock stents, which attach the legs to the main body (the rounded barbs prevent migration and are dulled for compatibility with balloons), result in low endoleak rates. Low porosity of the graft material has also been reported in bench testing. Finally, it has been suggested that inflammatory responses may vary depending on endograft materials, thus affecting aortic wall activity and stiffness and subsequent sac regression.22,23

Other advantages of the TREO device are a proximal clasp that does not snag on the bare stent when recapturing the tip, a leave-behind sheath that reduces access vessel trauma, and adjustable zones between main body and leg sizes that allow for in situ sizing during implantation.

The TREO device has a high regression rate at 1-year follow-up and represents a new-generation device to improve our trust in EVAR.

Case Report: Treatment of a Juxtarenal Aortic Aneurysm With a Relay®Plus Stent Graft and a Fenestrated Anaconda™ Device