Optimizing Outcomes of Endovascular Aneurysm Repair in Patients With CKD

Renal function impairment is a frequent complication of endovascular aneurysm repair (EVAR), occurring in as many as 30% of patients. Although most patients recover, progression to advanced stages of chronic kidney disease (CKD) is associated with lower long-term survival.1 The risk of procedure-related acute kidney injury (AKI) can be mitigated by pre- and postoperative strategies and proper endovascular techniques. This article summarizes the factors affecting loss of renal function and strategies to optimize renal outcomes in patients undergoing EVAR.

Fenestrated or branched endovascular aneurysm repair (F/BEVAR) using custom-made or patient-specific devices provides the best long-term results with respect to target vessel outcomes. Although it is logical to assume that F/BEVAR carries higher risk of renal injury compared with standard EVAR, de Souza et al have shown nearly identical outcomes with both types of repair.1 A decline in renal function occurred in 27% of patients after FEVAR and in 42% of patients after EVAR at 5 years (P = .5). Tran and colleagues also reported on renal function outcomes among 110 FEVAR patients.2 Freedom from renal function deterioration occurred in 62% of patients at 2 years, which is somewhat lower than what was reported by our group (74% at 3 years).2,3 These differences are most likely explained by how investigators define deterioration. Tran et al defined deterioration as any change to a worse CKD category, whereas our study used > 25% decline in baseline estimated glomerular filtration rate (eGFR).2,3 Results with parallel grafts were reported by the Stanford group, including progression in CKD stage in 41% of patients and 76% freedom from renal function deterioration at 1 year.4 For open repair, Mills and colleagues reported an 18% to 39% rate of renal function deterioration at 2 years.5

Multiple mechanisms explain the acute and late insult in renal function after complex endovascular repair. Among patients who develop AKI, persistence of a silent inflammatory response may trigger fibrotic changes in the renal parenchyma, leading to long-term structural and functional damage.6 The main pathologic change associated with AKI is tubulointerstitial fibrosis (TIF), sparing the glomeruli. The fibrotic process occurs as lethally injured cells heal or as sublethally injured cells recover. The degree of TIF correlates with progression of CKD even after the acute phase and initial recovery.7 It is likely that the persistence of pathologic processes that initiated the AKI (eg, inflammation, hypoxia, cellular senescence, maladaptive repair) leads to CKD progression through self-perpetuating TIF.8 We have found that patients who developed AKI after F/BEVAR had a fourfold increased risk of renal function deterioration.3 Another proposed mechanism is that systemic hypertension causes progression of kidney fibrosis. Picken and colleagues have described the association of renal parenchyma loss leading to glomerular hypertension, impaired kidney blood flow autoregulation, hyperfiltration, hypertrophy, and, ultimately, barotrauma-mediated glomerulosclerosis-induced TIF.9

Atheroembolism is also a cause of AKI, presumably due to ischemia, although cholesterol crystals lodged in the microvasculature can be a direct source of acute and chronic inflammatory changes that result in encasement by histiocytes, intimal proliferation, and fibrosis.10 Contrast-induced nephrotoxicity may perpetuate this vicious circle of medullary ischemia and TIF.11

Renal function reserve (RFR) is described as the kidneys’ capacity to maintain adequate filtration after significant loss of cells.12 Some patients, particularly the elderly, may have significant renal impairment despite a normal baseline eGFR because of decreased RFR. The microanatomic structural changes of the kidney with older age include a decreased number of functional glomeruli from an increased prevalence of nephrosclerosis (arteriosclerosis, glomerulosclerosis, tubular atrophy with interstitial fibrosis) and, to some extent, compensatory hypertrophy of remaining nephrons.13 Patients with limited preoperative RFR cannot recover after AKI and have continued decline of renal function. Conversely, patients with normal RFR may recover from AKI and maintain normal eGFR despite the permanent reductions in RFR. These patients are therefore more susceptible to subsequent changes in renal function with recurrent insults.14

Historically, the definition of renal injury has widely varied in the literature, leading to discrepancy between reports.15 Some studies focused on change in serum creatinine or need for renal replacement therapy, which underestimates the incidence of AKI.16 The Acute Dialysis Quality Initiative group introduced the risk, injury, failure, loss, and end-stage (RIFLE) classification based on serum creatinine concentration, eGFR, and urine output measurements.17,18 These consensus criteria were the first to recognize less severe stages of AKI (Table 1).

Cystatin C is a plasma protein that is produced by nucleated human cells and is a more sensitive marker of renal injury than serum creatinine and GFR. Its use is rarely applied in clinical practice.19 Evaluation of cystatin C after EVAR has shown contradicting results, with some reports showing no impact and others showing significant deterioration.20,21

AKI likely occurs due to systemic factors, ischemia, contrast-induced nephropathy, atheroembolism, renal artery ostial disease, renal artery trauma, and inflammatory reaction (Figure 1). A single-center report detailed a comparison between open repair and FEVAR.22 FEVAR demonstrated an advantage, with only 9% versus 27% new-onset renal insufficiency and 3% requiring dialysis in both groups; however, this difference did not persist. During the 2-year follow-up, there was a small increase in new-onset renal insufficiency in both groups (12% vs 6%) without statistical difference. Similarly, a systematic review demonstrated a minimal difference in renal insufficiency between open repair and FEVAR (14% vs 11%, respectively).23 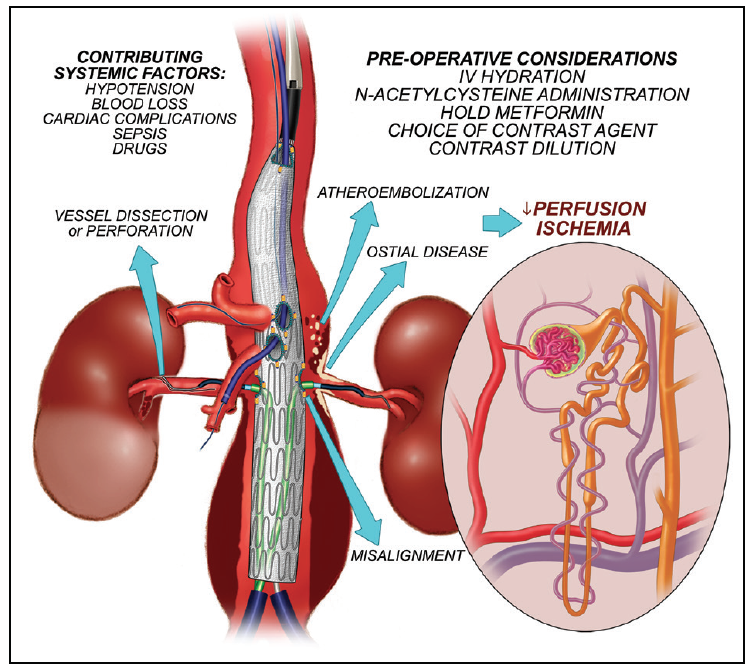 Figure 1. Contributing factors to AKI during complex endovascular procedures. Reprinted with permission from Mayo Foundation for Medical Education and Research.

Detailed preoperative and intraoperative imaging implies the need to administer nephrotoxic contrast agents. Patients with normal or mildly elevated creatinine (< 1.8 mg/dL) can withstand a standard CT scan in conjunction with hydration with minimal risks. In patients with GFR < 44 mL/min/1.73 m2 (stage 3B CKD), we have used a low-iodine CTA protocol (Table 2).24 This has replaced the use of catheter-directed CT scans. 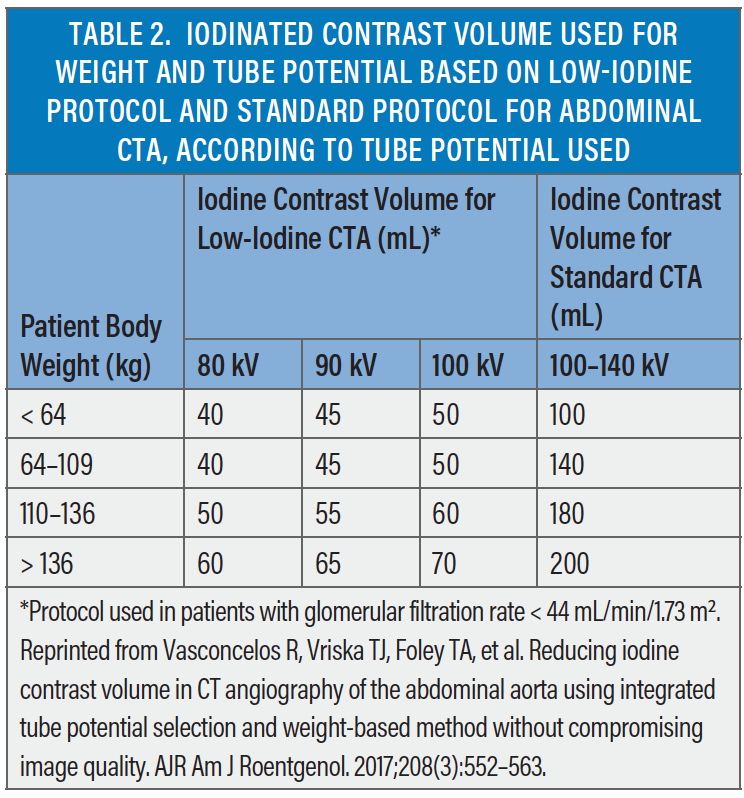 Data suggest that preoperative hydration with either saline or sodium bicarbonate reduces the risks associated with nephrotoxic agents administered during contrast interventions, with no advantage of either fluid over the other.25 In patients with normal renal function, the impact of prehydration is less dramatic. However, in patients with preexisting chronic renal insufficiency, prehydration has been shown to be beneficial.26 The use of N-acetylcysteine is controversial, with some studies suggesting benefit and other reports showing no added benefit.27-29 Multiantioxidant supplementation demonstrated a brief period of higher creatinine clearance but had no impact on serum creatinine after open abdominal aortic aneurysm (AAA) repair.30 Mannitol administered during open AAA repair has been demonstrated to reduce subclinical renal injury and showed a small benefit in patients undergoing EVAR when administered with hydration in a randomized trial.31,32 However, in a much larger review, mannitol was not beneficial in the open repair setting.33

Patients who take metformin, a common oral hypoglycemic agent, need special consideration when also receiving intravenous contrast. Metformin is excreted by the kidneys, and impaired clearance in the setting of renal dysfunction results in lactic acidosis. Low-osmolality contrast agents should be used in this scenario. A number of oral hypoglycemic agents contain metformin in combination with other medications, and attention to these medications is warranted. Holding metformin either before or after the angiographic procedure should be strongly considered. 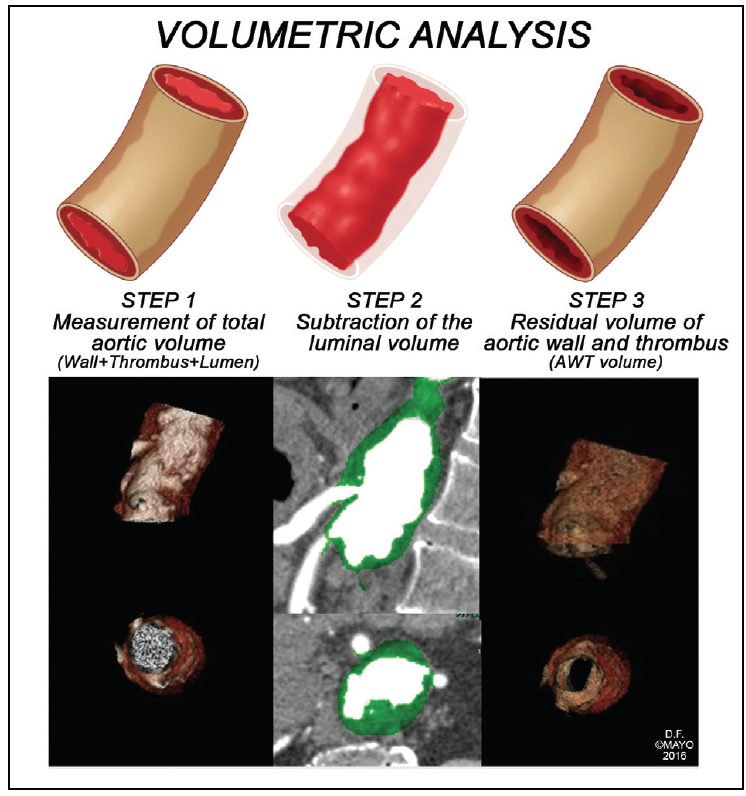 The volume of aortic wall thrombus (AWT) can predict risk of embolization during endovascular procedures. Ribeiro et al assessed the volume of AWT by calculating an index (Figure 2), which was representative of the solid portion of the aortic wall after excluding the blood volume.34 In addition, a qualitative analysis of AWT was performed using the number of aortic segments involved, thrombus type, thrombus thickness, thrombus area, and thrombus circumference (Figure 3). The most severely affected segment of the aorta was considered to characterize the thrombus (Figure 4). Using this grading system, patients with severe thrombus had higher rates of AKI and greater decline in eGFR in the first month after the operation. Kidney infarcts were present in 31% of patients with severe thrombus compared with 11% of those with mild AWT. Also, severe thrombus was an important determinant of renal function deterioration.3,34 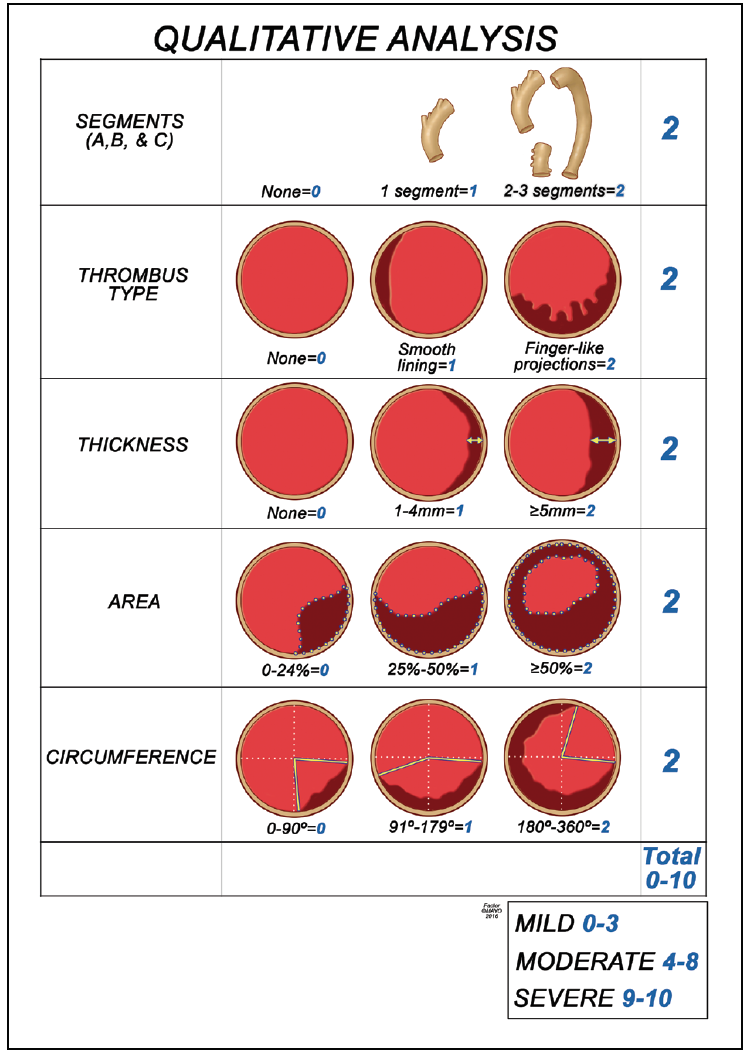 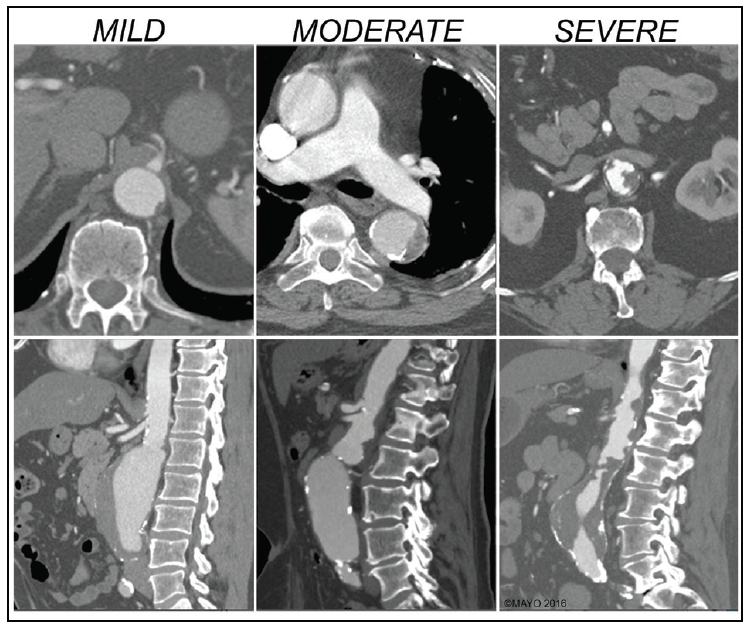 Meticulous implantation technique is essential to minimize the risk of renal injury. Because of the complexity of these repairs, multiple steps can be associated with deleterious effects to the kidney. Misalignment of fenestrations or an occlusive renal sheath can prolong renal ischemia. Embolization due to large or microscopic debris can occur during device orientation, deployment, and branch vessel stenting. Because these devices require larger-profile systems, using a filter is not a practical alternative. Excessive use of contrast media can be associated with added risk of nephrotoxicity. Finally, selective catheterization and stenting of the renal target should be performed with meticulous technique to avoid inadvertent perforation or dissection.

There is no substitute for meticulous procedural technique to avoid renal complications associated with F/BEVAR. Careful attention to the position of the renal wires as well as identifying potential side branch positions and accurate stent placement is critical in avoiding renal complications. Excessive manipulations, especially in the presence of orificial renal disease, can result in atheroembolic events. Branched devices may require more intra-aortic manipulation compared with fenestrated devices. Renal complications appear to be more common earlier in practitioners’ experience in reported series.35 The procedure should be planned with the goal of limiting catheter manipulations. For example, ptotic renal arteries may be best approached from the upper extremities or using a steerable sheath. During the procedure, additional time should be spent positioning and flaring the renal stents. Obtaining orthogonal views to the fenestration and placing the stent approximately 5 mm into the aortic endoprosthesis allows for sufficient overlap and flaring. Compression and occlusion of target stents can occur with insertion or removal of additional stent graft components. If suspected, protecting the stent with a balloon during device manipulation is helpful. Three-dimensional rotational angiography and cone-beam CT can help identify these defects prior to leaving the operating room.

Inaccurate device positioning can result in excessive device manipulation, leading to atheroemboli and longer operations. Lower extremity ischemia from large sheaths is associated with morbidity and mortality after F/BEVAR.36 Close monitoring of urine output postoperatively as well as hydration and bicarbonate administration may help prevent renal injury from elevated levels of creatine kinase. Lastly, reducing contrast administration during the procedure can be beneficial in decreasing the incidence of contrast-induced nephropathy. Injections of half- and one-third–strength contrast dilution can help minimize the contrast load. Similarly, using onlay fusion can assist in minimizing contrast. Intravascular ultrasound has also been used to facilitate alignment of the graft and, in combination with fusion imaging, may help reduce extra manipulations caused from precannulation. Although gadolinium and carbon dioxide have been used to reduce the risks associated with contrast angiography, these do not come without inherent risks as well. Gadolinium can cause nephrogenic systemic fibrosis in patients with severe preexisting renal dysfunction,37 and carbon dioxide may lead to gas embolism above the diaphragmatic level.

Patients should be closely monitored postoperatively to avoid hypotension and hypovolemia. Duplex ultrasound may help determine patency of renal targets. Renal parenchymal perforation and perinephric hematoma should be suspected in patients with a reduction in hemoglobin or severe flank pain. Close surveillance of renal stents by duplex ultrasound is undertaken approximately every 6 months during the first year and yearly thereafter.

Complex endovascular aortic repair is associated with a 20% to 30% risk of AKI, but dialysis is needed in only 1% to 3% of patients treated at high-volume centers. Meticulous preoperative planning with appropriate hydration can help reduce these risks, especially in patients with preexisting renal insufficiency. During the procedure, the use of advanced imaging techniques along with limited manipulations, judicious intravenous contrast administration, and careful protection of the stents during device implantation help minimize the risk of injury. Patients require routine follow-up to detect renal complications during the postoperative period, with 40% of patients recovering after acute renal insult to within 30% of their baseline function.

Ask the Experts: Acute TBAD: What Is Your Strategy Regarding Extent of Coverage and Use of Covered Versus Bare Stents?

Strategies for Stroke Prevention During TEVAR: From Embolic Protection to Device Preparation and Delivery

Treating Residual Dissection: When and How to Prepare an Infrarenal Landing Zone in a Dissected Aorta for EVAR

By Darren B. Schneider, MD