One center’s algorithm for treating GI bleeding and a discussion of on- and off-label embolic agents available for use.

Gastrointestinal (GI) hemorrhage is a common life-threatening disease process, resulting in more than 140,000 hospital admissions per year in the United States, at an average cost of $6,000 per admission. More than 5,000 deaths are attributable to GI hemorrhage annually.1 Historically, endoscopy and colonoscopy have been the first-line option for the diagnosis and treatment of bleeding in the GI tract. Recent advancements in catheter design and size, as well as in embolic agents, have shifted that paradigm toward endovascular evaluation and intervention. Current best practices suggest a multidisciplinary team including gastroenterology, interventional radiology, and surgery is best equipped to manage and treat GI hemorrhage.

GI hemorrhage presentations are characterized as upper or lower depending on which side of the ligament of Treitz the bleed occurs. Upper endoscopy remains the treatment of choice for upper GI bleeding. However, colonoscopy during active lower GI hemorrhage is often limited by the presence of blood in the colon and an inability to identify the bleeding source. Recent advancements in CTA have markedly improved the ability to identify the bleeding source and appropriately characterize it. New advancements in CTA and development of GI bleeding protocols consisting of a noncontrast, arterial, and venous phase CT scan have changed the diagnostic algorithm. Whereas angiography and nuclear medicine tagged red blood cell scans were the historical mainstays of GI bleed diagnosis, CTA is highly sensitive and specific for bleeding with a reported sensitivity of 85% and specificity of 92%.2 This diagnostic utility often exceeds that of conventional angiography, leading many clinicians to forgo any invasive angiography in the presence of a negative CTA. The additional information gained with cross-sectional imaging is often clinically relevant. Venous variceal bleeding, which is not generally identified on conventional angiography, is apparent on multiphase CTA. Distinguishing arterial bleeding from venous bleeding is critical to developing the appropriate treatment plan, particularly at centers that have a selection bias for portal hypertension–associated hemorrhage, such as transplant centers.

The underlying causes of GI hemorrhage are broad and include both malignant and benign pathologies including diverticulosis, angiodysplasia, vascular malformation, and portal hypertension. The treatment of GI hemorrhage depends largely on the location and underlying pathology. The classic embolic agent of choice for hemorrhage in the GI tract is the coil. Advancements and miniaturization in microcatheter design now allow for microcoils to be deployed distally in the vasa recta of the offending arterial branch, effectively achieving hemostasis while sparing collateral circulation and thereby minimizing the risk of bowel ischemia. Liquid and particle embolics play increasing roles in the treatment of challenging bleeding, particularly in the upper GI tract, which possesses a rich collateral circulation.

When consulted regarding a patient with life-threatening GI bleeding, we first obtain a multiphase CT scan (Figure 1). When time is of the essence, as it often is during life-threatening GI hemorrhage, patients can be treated most efficiently when they are brought directly from the CT scanner to the angiography suite. Activation of an interventional radiology team generally requires 30 to 60 minutes. This time is best served by obtaining the CTA that will not only confirm the diagnosis of GI bleeding but also provide valuable information to the interventionalist, including the vascular distribution of the bleed, the size and configuration of the access vessels, and the anatomy and configuration of the mesenteric vasculature (Figure 2). 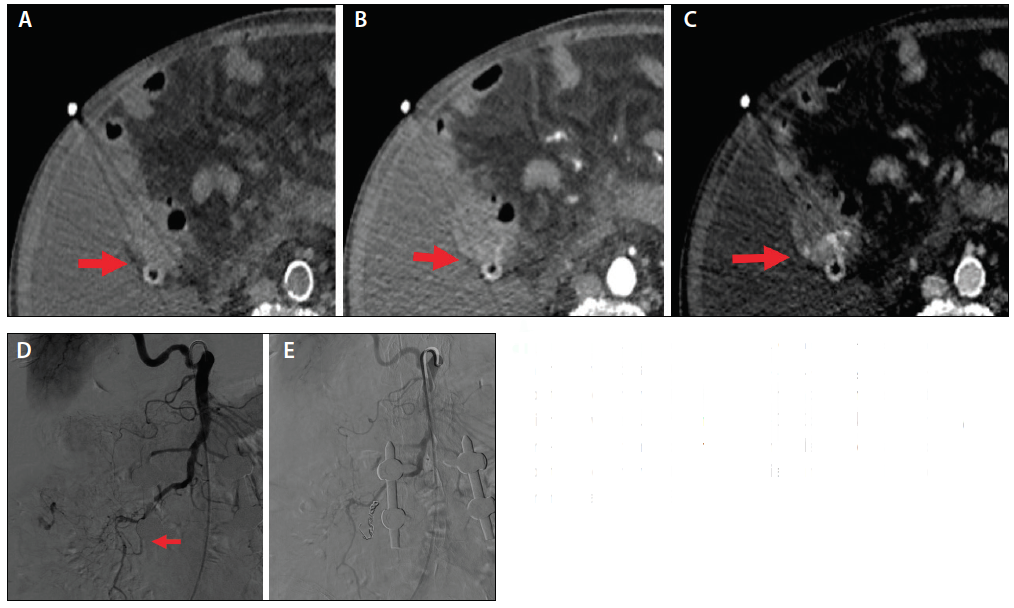 In a situation where CTA is negative for active bleeding and a patient is hemodynamically stable, we often obtain a tagged red blood cell nuclear medicine scan to localize the bleeding to one side of the colon or general region of the small bowel. With the knowledge of the vascular distribution involved in the bleed gained from the CTA, we position a 5-F catheter in the origin of the visceral artery and obtain a power-injected visceral angiogram to localize the bleed on angiography. Superselective angiography with a microcatheter is then performed to position the microcatheter in the vasa recta.

Identification of active bleeding with diagnostic angiography is often challenging, with reported negative angiography rates as high as 40%.3 There are several advanced techniques to increase the diagnostic utility of angiography. Cone-beam CTA is a relatively new technique allowing for a limited CT scan to be obtained on the angiography table by rotating the fluoro C-arm circumferentially around a patient while contrast is injected through the arterial catheter. This technique has increased the identification of active bleeding.4 For particularly inconspicuous bleeds, provocative angiography is a more aggressive technique used to force an intermittent bleed to show itself and become a target for endovascular treatment. A combination of tissue plasminogen activator (tPA), nitroglycerin, and heparin are injected in increasing dosages while angiography is intermittently performed until a bleeding source is identified. Embolization is then performed (Figure 3). Angiography is repeated to confirm the adequate treatment of the bleed as well as identify any additional collateral supply to the area of hemorrhage.

The choice of which embolic to use is based on several factors, including underlying pathology if known, lesion location, and operator experience. Below are some of the most common embolic agents as well as a description of the relative benefits and risks for each.

Known by various names, most commonly Gelfoam (Pfizer, Inc.), gelatin has been used in interventional procedures for decades. There are a variety of methods by which it can be administered that affect mostly the size of the particle when injected. A small sheet of Gelfoam is frequently cut by the operator to the desired size and agitated in varying concentrations of contrast before injection. Recently, precut and calibrated gelatin (EmboCube, Merit Medical Systems, Inc.) has been made available to introduce consistency and reduce preparation time. An added benefit of gelatin is its possible resorption over weeks, thereby making it a potentially “temporary” embolic agent. Gelatin generally embolizes distally and, therefore, has a higher risk of ischemia, particularly if smaller calibers are used. It can be used as an adjunct to coil embolization to enable a more rapid thrombosis of a coil pack.

N-butyl cyanoacrylate (NBCA) is a radiolucent monomer used in conjunction with ethiodized oil and/or, less often, tantalum powder for embolotherapy in nonneurovascular interventions. NBCA rapidly polymerizes on contact with ionic medium and bonds with adjacent structures. It is highly thrombogenic and bacteriostatic, making it an ideal candidate for the control of GI hemorrhage; however, use in GI hemorrhage is off-label. Its use is limited by a lack of stable control and operator familiarity with its deployment. The availability of the intravascular formulation may be limited to sites with neurovascular interventions. The polymerization of NBCA is controlled by dilution with ethiodized oil, and depending on this, it can be formulated to provide a more proximal embolization. It can also be used to help thrombose a large aneurysm or pseudoaneurysm when coiling alone is insufficient (Figure 4).

Coils come in two broad categories: pushable and detachable. Pushable coils are the dominant embolic agent used in both upper and lower GI hemorrhage. The main limitation of coils is malposition or nontarget coil migration. This limitation can be somewhat mitigated by the use of detachable coils, which allow for coil formation and final positioning prior to deployment. Additionally, detachable coils are available in longer lengths compared to pushable coils. This also helps compensate for the increased cost associated with detachable coils, because one long detachable coil could be used in place of several shorter pushable coils. Coil embolization is considered a more proximal form of embolization as the embolic device does not generally migrate into the bowel mucosa and ischemia is a rare complication.

Ethylene-vinyl alcohol copolymer (EVOH) (Onyx, Medtronic) is indicated for the treatment of neurovascular arteriovenous malformation; its use in the GI tract is off-label. Its two formulations allow for more proximal or distal embolization as needed. However, as a whole, the territory affected by embolization is more distal than that of coils. Onyx requires at least 20 minutes of agitation before use and it is best to start agitation at the beginning of a case in which it may be used. Like NBCA, there is a small risk of catheter adherence to the extruded material as well as nontarget embolization. The risk for ischemia is generally higher than that of coils.

Most commonly composed of polyvinyl alcohol or acrylic polymer impregnated with porcine gelatin, particle embolics are available in a range of sizes. The target vascular territory for embolization can therefore be selected by choosing an appropriate size: larger for more proximal embolizations and smaller when a more distal vascular territory is desired. In GI hemorrhage, particles are most useful for the treatment of tumors, in which careful selection of the feeding vessels can often provide a palliative treatment in the acute setting when options are limited.

Imaging after embolotherapy is crucial in confirming that the bleeding has been effectively treated. The bowel has a rich collateral supply, and it is not uncommon to find two small third-order arterial branches both contributing to bleeding. The second bleeding vessel can often be identified only with high-quality postembolization angiography from the microcatheter in a slightly more proximal vessel position. Angiography from the 5-F base catheter is performed to confirm the result. It may be beneficial to interrogate the other visceral arteries to avoid the satisfaction of search in the uncommon situation in which there are multiple bleeding sites in the GI tract.

In cases of upper GI bleeding in which the source has been localized to the stomach or duodenum, if no active contrast extravasation is seen, empiric embolization of the left gastric artery or gastroduodenal artery is beneficial, with little additional risk.5 In select cases of continued clinical hemorrhage and poorly localized source, provocative angiography is useful, with up to one-third of patients having their source of bleeding identified and treated.6

Diagnosing and treating GI hemorrhage has evolved significantly over the past several years. Increased adoption of CTA has decreased the rate of negative diagnostic angiography procedures. CTA has also greatly improved the localization of the site of hemorrhage as compared with nuclear medicine tagged red blood cell scans. Improved localization allows for a more detailed and superselective examination of the vascular territory supplying the hemorrhage during angiography. Familiarizing the primary clinical teams with this new paradigm in diagnosis has improved interdisciplinary management of patients with GI hemorrhage.

When a bleeding source is identified, embolization techniques can vary with the site of the hemorrhage. A more aggressive embolization with gelatin and liquid embolics can generally be performed when treating GI bleeds because the collateral vascular supply of the upper GI system is more robust as compared with the lower GI tract. Coils are the standard embolic agent of choice. There are several different coils available from various manufacturers, each with unique attributes. Increasingly, especially in upper GI bleeds, liquid embolics that distribute to smaller end vessels can yield a more durable result. NBCA has been the agent of choice when this approach is used, with EVOH also used by select operators. Both of these embolics have a steep learning curve requiring advanced operator experience.

With available advanced techniques that enable better localization and embolization as described, the technical success of embolization for both upper and lower GI hemorrhage is between 52% to 100%.7,8 Complications of embolization include ischemic changes that are seen more frequently in the colonic territories in up to one-third of patients.7 Ischemia can lead to stenoses within the bowel or, less commonly, perforations. Careful selection of the appropriate embolic agent for the vascular territory being treated can minimize these complications.

Embolic Locoregional Therapy for the Treatment of Hepatocellular Carcinoma

By Zlatko Devcic, MD; and Beau B. Toskich, MD