Visceral artery aneurysms (VAAs) are rare pathologies with an incidence of 0.01% to 0.2%.1 The incidence is rising due to widespread use of imaging techniques in clinical medicine, especially CT. Most VAAs are asymptomatic and few present acutely at the time of rupture. The most common cause of VAA is atherosclerosis, but other known causes include iatrogenic, infective, inflammatory, and autoimmune conditions as well as collagen and connective tissue disorders. The aneurysms are broadly classified into true, with three layers, and pseudoaneurysm with one layer of adventitia or surrounding tissues.

The spectrum of VAAs includes the splenic, hepatic, renal, gastroepiploic, pancreaticoduodenal, gastroduodenal, celiac, superior mesenteric, and inferior mesenteric arteries. Over the last decade, there has been a shift from open repair to endovascular treatment, which is mostly performed under local anesthetic and has a shorter length of stay with comparable mortality.2 This article provides an overview of endovascular treatment of VAAs. VAAs with concurrent aortic disease including aneurysms and dissections are beyond the scope of this article.

Tips and Tricks for Endovascular Treatment of VAAs

VAAs are often asymptomatic and an incidental finding on CT, ultrasound, or MRI or found as part of the thoracoabdominal aneurysm workup CTA. As with any aneurysm, rupture can be fatal and mortality rates range from 25% to 70% in cases in which VAAs have ruptured.3 Splenic artery aneurysms (SAAs) constitute the highest percentage of VAAs at 60%, renal artery aneurysms (RAAs) are the second common type of VAA, and hepatic artery aneurysms (HAAs) are the most symptomatic. Salient points for each VAA are summarized in Table 14-10 and case examples are shown in Figure 1 and Figure 2. Aneurysm calcification and/or thrombus formation has no direct association with rupture risk and thus should not be used as an indication for intervention.11 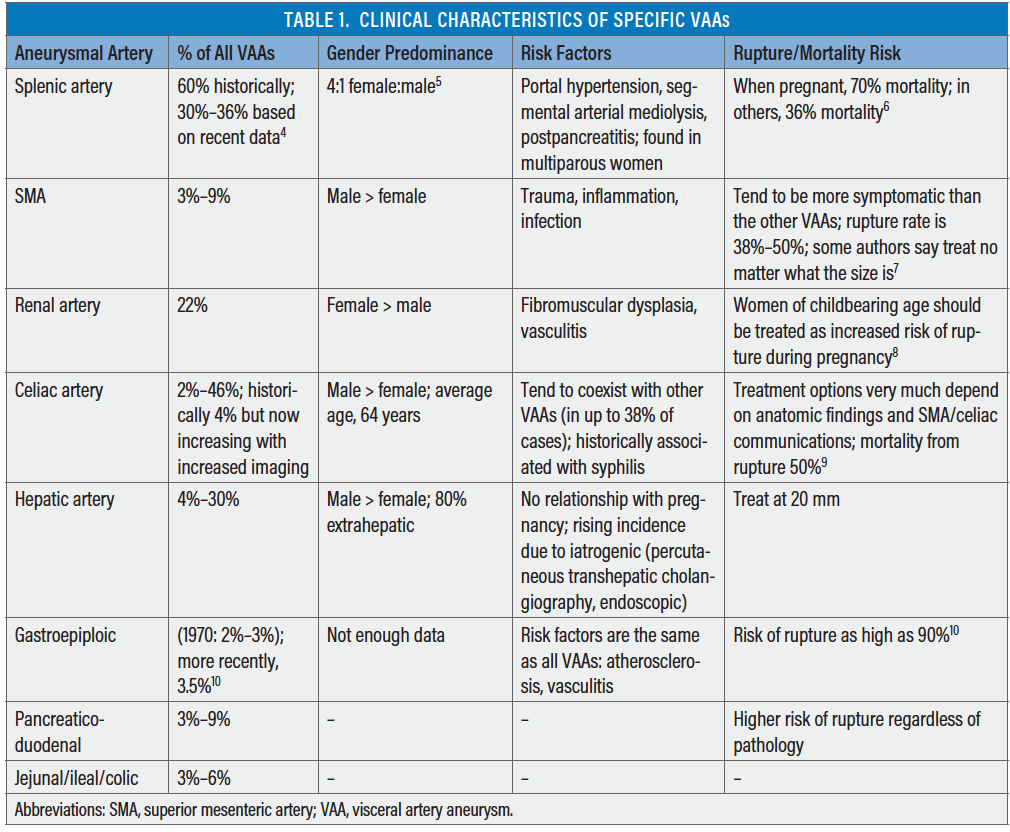 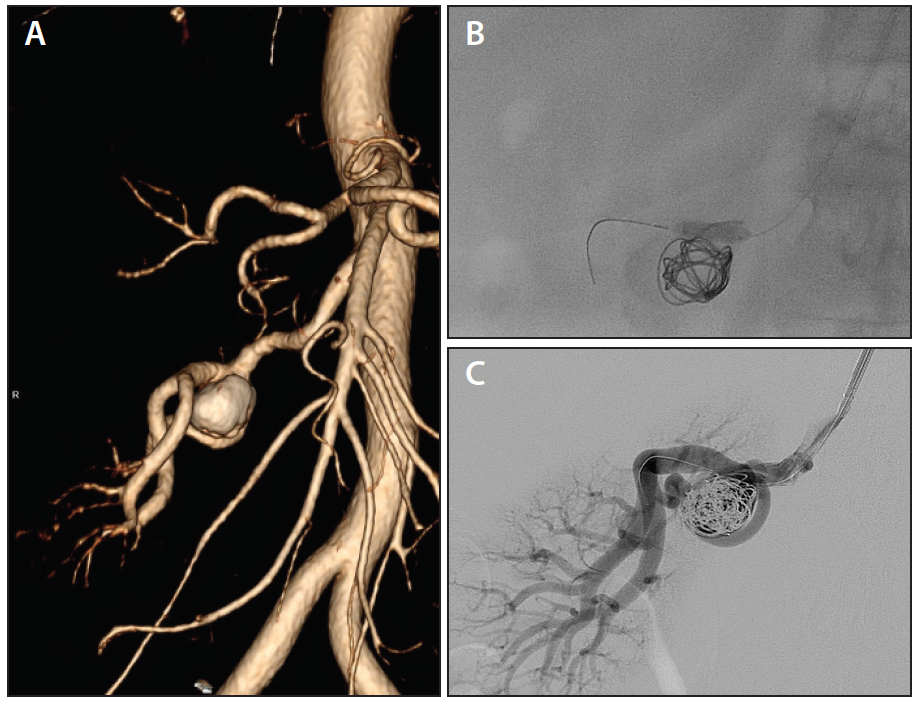 Figure 1. A middle-aged woman with a 2.9-cm aneurysm involving the artery of right single kidney. The aneurysm neck is relatively wide and arises immediately distal to an early large branch take off, and the aneurysm was treated with balloon-assisted coiling (A, B). Completion angiography showed preserved arteries and an occluded aneurysm (C).

Figure 2. A 50-year-old woman with a 3-cm saccular aneurysm arising from the pancreaticoduodenal artery. Volume-rendering CTA showed the aneurysm (A). Sagittal oblique CTA showed the complexity of aneurysm neck (curved arrows, B). Angiography demonstrated cannulation of the aneurysm (C). Gradual filling with coils shown in panels D and E.

Although ultrasound and duplex scans can diagnose and accurately assess VAAs, they remain operator dependent. CTA is the gold standard modality and should be used for to determine precise measurements, plan intervention (endovascular or open), and assess the remainder of the visceral and aortic vasculature.12

The aim of VAA treatment is to restore normal flow through the parent artery, induce thrombosis of the aneurysm space using a covered stent or physically filling it with embolic materials, minimize the recanalization rate, and reduce the risk of displacement or migration of embolic material.

Planning is the most crucial component of the procedure. The following anatomic features should be meticulously assessed, including:

Treatment of symptomatic SAAs is always warranted. In pregnant women as well as women of child-bearing age, treatment should be considered regardless of size. In the general population, the threshold is 20 to 25 mm.12

Accounting for 22% of VAAs, treatment of RAAs is recommended at 2 cm.13 Complexity will depend on the location. Based on the Rundback classification, type 1 arises from the main trunk, type 2 is at the extrarenal proximal arterial bifurcation, and type 3 is from the distal branches.14 Type 1 RAAs are best treated with covered stents. Due to the crucial functionality of the kidney, treatment for type 2 and 3 RAAs should include stent-assisted coil embolization or the balloon remodeling technique with Onyx liquid embolic system (Medtronic) with or without coils.15 A recent meta-analysis demonstrated lower complication rates of 10.5% with endovascular treatment compared with 12.4% for open repair, as well as a shorter hospital stay.16

HAAs are more common in men and tend to be extrahepatic in 60% of cases. Fifty percent of intrahepatic HAAs have a higher mortality and rupture risk due the higher incidence of hepatic artery pseudoaneurysm. This is thought to be associated with the increased hepatic instrumentations such as percutaneous transhepatic cholangiography and endoscopic retrograde cholangiopancreatography.17 Outcome data are sparse; however, open repair and endovascular treatment have comparable outcomes, with a slightly higher rate of reintervention in the endovascular treatment group.16

Successful use of covered stent grafts to exclude aneurysms and pseudoaneurysms has been widely published, with technical and clinical success rates ranging from 84% to 100%.15,18 However, stent insertion is not always possible due to anatomic limitations and/or aneurysm complexity. Small vessel diameter (< 4 mm), severe tortuosity, large diameter discrepancy between the proximal and distal landing zones, and location of the aneurysm neck at a major vessel bifurcation preclude successful use of covered stent grafts. In aneurysms with relatively wide necks, stent-assisted coiling can be combined with a low-profile uncovered stent and microcoil embolization. Kissing stents or Y-configuration stents can be deployed for VAAs positioned at bifurcations, such as in renal hilar branches or hepatic artery bifurcation.

Filling of true aneurysms with coils can occlude the aneurysm but is not recommended for patients with pseudoaneurysm/inflammatory aneurysms.19 The mechanism of aneurysm occlusion is achieved by obtaining high physical packing density or increasing coil thrombogenicity. Detachable coils offer predictable and controlled deployment as well as “test” deployment to assess the stability of the coil position. The sizing and length of coils varies depending on the manufacturer. Recent advances in coil technology have provided interventionalists with a useful range of coil shapes and behavior. For example, three-dimensional coils tend to take a caging shape, which facilitates embolization of saccular aneurysms with relatively wide necks without risk of parent vessel occlusion.

Use of glue and ethylene-vinyl alcohol (Onyx) in VAA embolization has been established.19 Balloon-assisted Onyx embolization preserves the main artery with accurate, radio-opaque embolization. The newer lower-density Onyx has a significantly lower glare artifact on follow-up CTA. This is an improvement on the previous iteration of Onyx where the increased density caused glare on CTA, reducing sensitivity of early reperfusion.

Use of occlusive devices such as the Amplatzer vascular plug (Abbott) has been shown to be effective for aneurysm embolization and in cases where a large number of coils is needed, resulting in a more economical approach to VAA embolization. These devices also offer accurate deployment with high success rates.4

Double-layer micromesh stents.  Use of a double-layer micromesh stent is a more recent development and consists of a retrievable, self-expanding outer nitinol stent cased an internal micromesh layer. The stent is an open cell, highly flexible device, which allows it to adapt to tortuous anatomy, while the micromesh allows thrombosis of the aneurysm via flow diversion. The device is also repositionable and retrievable. A 100% technical success rate has been reported.20

Double-lumen balloons.  Use of double-lumen balloons has been mainly reported in neurointerventions and has recently been reported for use in the treatment of VAAs. This technique offers balloon-assisted coil embolization with an option to deploy a stent across the aneurysm neck if the coils appear at risk of migration when the balloon is deflated.21

Microvascular plugs.  Although microvascular plugs have been available since 2013, they have mainly been used in neurointerventions and remain new to the endovascular management of VAAs. The MVP plug (Medtronic) is a nitinol, cage-like design scaffold with a polytetrafluoroethylene cover on one side and a preloaded detachable pusher.22 There are case reports of use in visceral arteries for trauma, tumor embolization, and aneurysm embolization, but larger studies are needed to assess their efficacy.

Endovascular embolization and treatment of VAAs is both safe and feasible. The long-term patency rates and short in-hospital stays have allowed the paradigm shift from open repair to endovascular treatment with comparable results.

Embolization for Type I and Type II Endoleaks