Carotid Bifurcation: An Analysis of Straightforward Lesions and Those With Additional Challenges

By Angela A. Kokkosis, MD, and Peter A. Schneider, MD

Carotid endarterectomy (CEA) has been the gold standard for carotid revascularization for more than 50 years due to its low perioperative morbidity and excellent long-term patency. With the advent of endovascular technology and the promise of good outcomes using a minimally invasive technique, it was thought that the carotid bifurcation would be amenable to stenting and would provide similar benefits of minimally invasive outcomes as in other vascular territories. However, after many carotid revascularization trials published results demonstrating that transfemoral carotid artery stenting (TFCAS) was not superior and may even carry a high perioperative stroke risk, consideration of replacing CEA with CAS was abandoned.1,2 Although most carotid bifurcation lesions could be well treated with stent placement, the quality of cerebral protection with TFCAS was inadequate. Instead, TFCAS has generally been reserved for special circumstances in which CEA was deemed high-risk, or not surgically possible. With the 2016 FDA approval of a new approach to CAS (transcarotid artery revascularization [TCAR]) via transcarotid open exposure and embolic protection with flow reversal, and its associated promising data, there has been a revival in the consideration of using CAS as a revascularization option. The TCAR approach affords better cerebral protection, earlier protection from dislodgement of emboli (as seen during key steps of TFCAS traversing the aortic arch and crossing the carotid lesion), as well as more complete particulate capture throughout the procedure as a consequence of flow reversal. With the availability of better cerebral protection, a major driver of patient selection is analysis of the “stentability” of the carotid lesion itself. Currently approved carotid stent designs (ie, open cell, closed cell, self expanding) are still limited for use in heavily calcified lesions, acute thrombus to include a subset of lesions considered to be intraluminal filling defects, and severe tortuosity. This article will address standard and challenging carotid bifurcation anatomy for the application of CAS, which is also applicable to TCAR.

In general, the optimal carotid lesion for CAS should have minimal calcification, minimal tortuosity, and no acute or mobile thrombus. Absence of these features will ensure that there is adequate stent expansion, no evidence of stent kinking, and reduced risk of plaque protrusion or plaque prolapse. Ultimately, the goal is to avoid stent thrombosis and/or a nidus for distal embolization to the brain. Figure 1 and Figure 2 contain examples of two cases of carotid bifurcation lesions that are suitable for placement of a carotid stent. 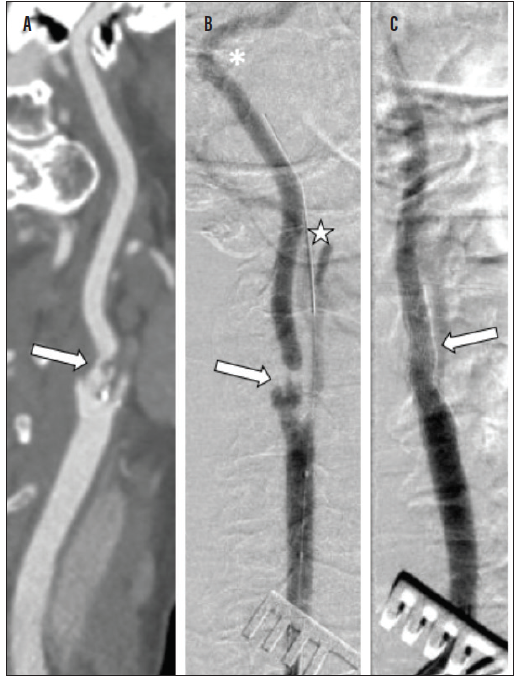 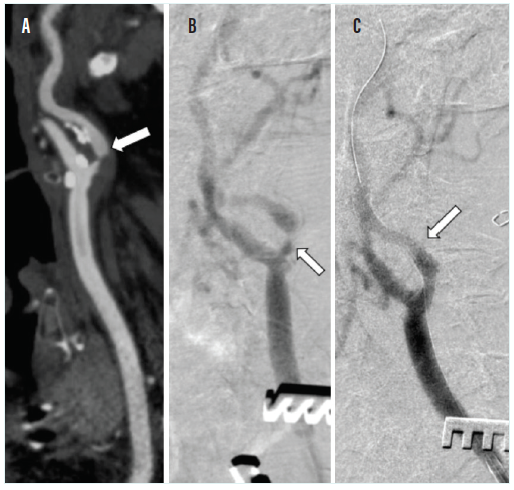 Currently available carotid stents have some limitations with regard to what types of atherosclerotic lesions they can be used to treat. The first hurdle to consider is calcification. These flexible, self-expanding stents are incapable of combating heavy calcification, and typically with > 2/3 circumferential calcification that is ≥ 3 mm thick (an example of this is given in the article starting on page 26), the residual lumen is too small to allow complete stent expansion. Another morphology that will lend to stent compression is the exophytic calcified lesion, in which a “rock” of calcium impinges on the carotid lumen (Figure 3A). 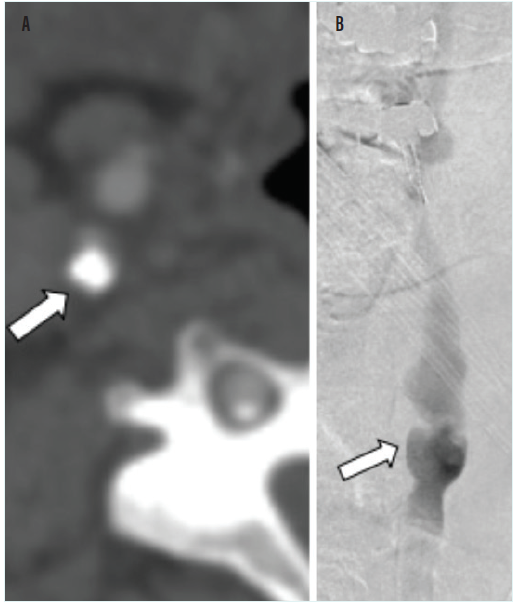 Figure 3. The arrow points to heavy exophytic calcium within the internal carotid artery that will not yield to carotid stenting (A). The arrow points to the appearance of an intraluminal filling defect on digital subtraction angiogram that may suggest unstable or mobile thrombus (B).

If the contents of a carotid lesion consist of acute mobile or fixed intraluminal thrombus, bare-metal carotid stents may not sufficiently scaffold, the thrombus may protrude through the stent interstices, and potentially lead to distal embolization. Although scattered case reports have used covered stents for this application, the safety and durability of a covered stent in this area has not been established (Figure 3B).

As patients age, another phenomenon seen in the carotid vasculature is elongation and redundancy. This process results in the presence of tortuosity or kinks. Tortuosity present immediately proximal, distal, or at the site of a lesion may result in propagation of the kink with vessel occlusion or crimping of the stent, and subsequent stent occlusion (Figures 4A and 4B). 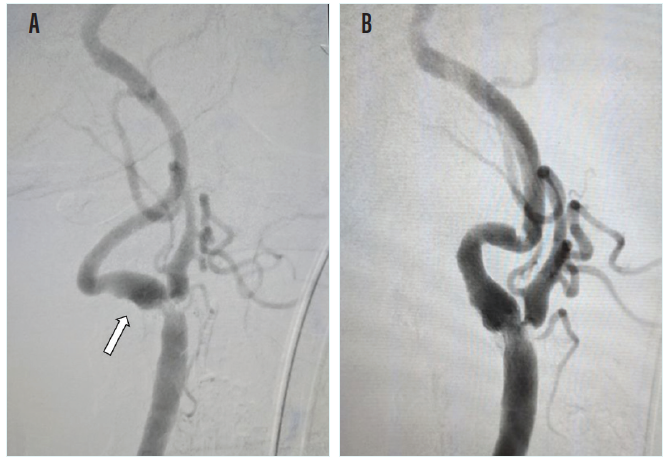 Figure 4. 90° angulated take off of the internal carotid artery, a challenging anatomy for any carotid stent (white arrow) (A). Poststent appearances in angulated anatomy (B).

Carotid stenting is a viable option for carotid revascularization in the appropriate patient population. One important determination is the stentability of the carotid lesion itself, regardless of which carotid stenting approach is utilized. In our experience, approximately 80% of carotid lesions can be well treated with a carotid stent. To achieve the greatest technical and postprocedural success, it is ideal to select carotid lesions without severe calcification, severe tortuosity, or mobile thrombus.

The Cadence of the TCAR Procedure