Lessons learned from a single-center retrospective study of flow diversion in patients with complex cerebral aneurysms.

Flow diversion has recently become an alternative treatment to coiling for complex cerebral aneurysms.1-6 Flow-diverting stents (FDSs) cause changes in flow dynamics between the parent and daughter vessels and disrupt the pathologic flow into an aneurysmal lesion. Over time, this causes thrombosis and allows for neointimal proliferation, sealing off the aneurysm.7-9 Large-necked, giant, and fusiform aneurysms remain difficult to treat, but the use of advanced flow diversion strategies and availability of FDSs have improved outcomes.

A systematic review of early studies (2009–2014) analyzed 29 studies including 1,524 patients with intracranial aneurysms with 3 to 62 months of follow-up.4 The overall technical failure and complication rate was 9.3%. The rate of procedure-related complications was 14%, and there was a 6.6% morbidity and mortality rate. Posterior circulation location, peripheral location, and fusiform, dissecting, and circumferential aneurysms were statistically significant risk factors for procedure-related complications. With the accumulation of experience, thromboembolic complications were recently noted in 1.4% of procedures and hemorrhagic complications were found in 0.7%.10

This article focuses on the evaluation of results of challenging flow diversion cases, including undefined new, large/giant, blood blister–like, and recurrent sidewall aneurysms. These lesions are good indications for FDSs. We present the results of a retrospective study of 84 aneurysms in 74 patients treated with the Pipeline embolization device (Medtronic), with a discussion of the mechanisms of obliteration.

This retrospective study included 84 aneurysms treated with the Pipeline device in 74 consecutive patients (mean age, 52 years; range, 15–73 years) between October 2015 and May 2019. Forty patients were women and 34 were men. These cases were approved by the ethics committee of our hospital. Cerebral aneurysms with an undefined neck, large/giant size, those that were blood blister–like, and recurrent sidewall aneurysms were treated.

Endovascular treatment was performed with the patient under general anesthesia. Working projections were selected by three-dimensional (3D) rotational angiography in every patient. The length and diameter of the targeted landing zone of the parent arteries were measured using 3D reconstructions and two-dimensional working projection angiograms. In every patient, an 8-F Envoy guiding catheter (Codman Neuro, a Johnson & Johnson company) was placed proximally in the common carotid or subclavian artery. A 6-F, 115-cm or 5-F, 125-cm Navien intracranial support catheter (Medtronic) was navigated into the internal carotid or vertebral artery as distally as possible. A 0.027-inch Marksman microcatheter (Medtronic) was advanced over a 0.014-inch Traxcess microguidewire (MicroVention Terumo). The microcatheter tip was advanced distally enough so that the Pipeline FDS would not protrude into the aneurysm while it was being advanced.

In cases of very wide-necked large/giant aneurysms, if the Marksman catheter could not be passed directly, the “exchanging technique” was used. All patients were treated with the Pipeline embolization device, and the size was determined according to the largest diameter and length of the targeted landing zone. The FDS was released to cover the targeted landing zone, using techniques of microcatheter unsheathing, pushing the whole system, delivery wire advancement, and microcatheter resheathing. The release process should be as slow as possible for accurate deployment. Repeated angiography was necessary to confirm the stent opening and apposition to the artery wall because good apposition is very important to ensure safe and effective treatment. After the FDS was fully released, the microcatheter was advanced over the delivery wire to capture it. A single FDS was placed in most cases. Use of additional FDSs was necessary when the stent shortened and the aneurysm neck was not completely covered. We tried to avoid covering an artery bifurcation, such as the internal carotid artery bifurcation, basilar artery bifurcation, and vertebral artery bifurcation (Figure 1). Coils were used as an adjunct to FDS placement, if necessary. CT images were obtained if a patient had ongoing headache. Control digital subtraction angiography (DSA) was performed in every patient at 6 months. If the 6-month control DSA revealed incomplete occlusion of the aneurysm, an additional control DSA was performed at 12 months. 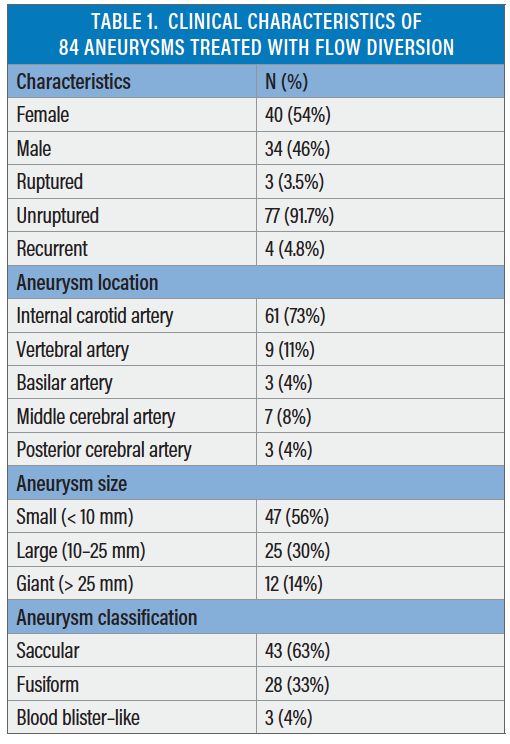 Eighty-one aneurysms were unruptured, including four recurrent sidewall aneurysms. Only three patients had a previous history of SAH caused by a blood blister–like aneurysms (Table 1). Most (62/84 [73%]) of the aneurysms were located in the internal carotid artery, with nine (11%) in vertebral artery, seven (8%) in middle cerebral artery, three (4%) in basilar artery, and three (4%) in posterior cerebral artery. In five patients, coexisting proximal stenosis of parent artery was also covered with the FDS without balloon angioplasty (Figure 2). Twelve (14%) aneurysms were giant (> 2.5 cm), 24 (30%) were large (10–25 mm), and 48 (56%) were small (< 10 mm). Fifty-three (63%) aneurysms were wide-necked saccular, 28 (33%) were fusiform, and three (4%) were blood blister–like.

All 84 aneurysms were successfully treated with a total of 80 FDSs, with no technical failures. Only one FDS was used in 68 patients: one FDS was used to treat one aneurysm in 62 patients and one FDS treated two aneurysms in six patients. Six additional patients required a second FDS to cover the aneurysm neck. Coils were placed in addition to the FDS in 28 aneurysms, eight of which were giant, 15 were large, and five were small; coils were used adjunctively in the same session with FDS placement. In patients with small aneurysms, coils were used adjunctively because three blood blister–like aneurysms were treated in the acute stage of SAH. Four recurrent aneurysms had coils from the previous treatments. Moreover, there was self-expanding stent at the aneurysm neck in one patient (Figure 3).

Figure 3. Right internal carotid angiogram showing a recurrent aneurysm in the right middle cerebral artery, which was previously treated with Solitaire stent-assisted coiling (Medtronic) (A). A lateral angiogram showing a single Pipeline FDS placement, causing stagnation of the contrast within the aneurysm sac (B).

The overall adverse event rate was 1.3% (1 of 74 patients), with a mortality rate of 1.3% (1 of 74 patients). One patient died due to thrombolysis caused by thrombus formation in the left internal carotid artery, resulting in ipsilateral remote intraparenchymal hematoma. Control angiography was performed in 68 (92%) patients with 77 (92%) aneurysms at 6 and 12 months. Five patients with six aneurysms had the 6-month control DSA pending. According to the control angiograms, 67 of 68 aneurysms were occluded, resulting in a total occlusion rate of 98.5%; one middle cerebral artery bifurcation aneurysm did not show complete obliteration on the 6-month control DSA.

In our series, the angiographic occlusion rate was 98.5% at 12 months, which is comparable with those of other studies evaluating the Pipeline embolization device,4 and our results confirm the superiority of FDS treatment in complex intracranial aneurysms. For simple aneurysms, conventional stent-assisted coiling and FDSs are two equally efficacious treatment modalities, such as for communicating segment aneurysms of the internal carotid artery.11 In 2015, Keskin et al reviewed 24 patients treated with the Pipeline device.12 At 6-month follow-up, 100% aneurysms were totally occluded, with one major device-related complication in a giant vertebrobasilar aneurysm.

The mechanism of healing for aneurysms treated with coiling as compared with flow diversion is different.13 The main function of the flow diverter is to reduce blood flow and induce stasis in the aneurysm so that gradual thrombosis occurs within the aneurysm and the aneurysm subsequently heals. The aneurysm sac is prone to thrombosis because of the irregular patterns of blood flow and the potential for a low oxygen tension, especially during immobilization or blood flow stagnation. As blood flow is altered, it activates the endothelium, due to its tendency to become hypoxic, and the activated endothelium then captures circulating leukocytes, tissue factor–positive microvesicles, and platelets.14,15 Finally, thrombosis is triggered by the induction of tissue factor expressed by the bound leukocytes combined with tissue factor on microvesicles. Experimental stasis has been shown to result in a significant decline in oxygen tension in the sinus.16 Understanding the mechanisms of aneurysmal thrombosis may validate these new treatments.

Flow diversion of bifurcation aneurysms is feasible, with low rates of permanent morbidity and mortality and high occlusion rates; however, occlusion may not occur. In a study by Michelozzi et al, 29 patients with 30 bifurcation aneurysms were treated with a single FDS.17 Twenty-one aneurysms were at the middle cerebral artery bifurcation, eight were in the anterior communicating artery region, and one was a pericallosal artery bifurcation. Permanent morbidity was 3.4% (1/29), due to a jailed branch occlusion, and mortality and permanent complication rates with poor prognosis (modified Rankin Scale score > 2) were both 0%. The overall occlusion rate was 82.1% (23/28), and it was 91.7% (22/24) in the group of patients with at least two DSA control sequences. One recanalization occurred at 41 months posttreatment. At the latest follow-up, seven (20%) of 35 covered branches were occluded, 18 (51.4%) showed a decreased caliber, and the remaining 10 (28.5%) were unchanged. In our cases, we tried to avoid covering the bifurcation while deploying the FDS.

A multivariable analysis identified older age (> 70 years), higher maximal diameter (≥ 15 mm), and fusiform morphology as independently associated with higher rates of incomplete occlusion at follow-up.10 Some authors found that a smaller FDS diameter promotes occlusion of small anterior circulation intracranial saccular aneurysms, most likely due to the inherent greater metal density of smaller devices.1 For distal cerebral artery aneurysms, such as those in the middle cerebral artery, posterior cerebral artery, anterior cerebral artery (A1/A2, pericallosal artery), and posterior inferior cerebellar artery, FDS use was also associated with a good clinical outcome.18 Twenty procedures were performed on 18 patients, 11 with prior FDS use, seven with a vascular reconstruction device, and two who were previously treated with both. Salvage FDS for previously stented aneurysms is feasible and offers good prospects of aneurysm obliteration with acceptable complication rates.19 In our series, stenosis proximal to the aneurysm was covered with the FDS without any adverse events.

Although the Pipeline embolization device was primarily used in our series, other flow diversion devices are either approved or under investigation, including the Silk device (Balt Extrusion), Surpass device (Stryker Neurovascular), and the p64 flow modulation device (phenox GmbH).

For wide-necked saccular, large/giant, and blood blister–like aneurysms and recurrent sidewall aneurysms, flow diversion with FDSs with or without adjunctive coiling is a valid and safe treatment option.