Mechanical thrombectomy has evolved as the standard of care for the management of large vessel occlusions. In the landmark randomized controlled trials that established the efficacy of mechanical thrombectomy (ie, MR CLEAN, EXTEND-IA, ESCAPE, and SWIFT PRIME), transfemoral access (TFA) was used as the primary method of arterial access. However, transradial access (TRA) has several distinct advantages over traditional TFA.

Despite the widespread adoption of TRA by cardiac interventionalists throughout the last decade, neurointerventionalists have only recently begun to use TRA. TRA is generally well accepted for diagnostic cerebral angiography, but apprehension remains for its use in neurointerventional procedures, including mechanical thrombectomy.6-12 The reason for this is multifactorial and includes a lack of familiarity with TRA as well as the relative paucity of literature describing its use in mechanical thrombectomy procedures for the treatment of acute stroke.

RATIONALE FOR TRA IN ACUTE STROKE

Access site complications from TFA include superficial hematoma, dissection, pseudoaneurysm, embolic complications, and critical limb ischemia. The access site complication rates from TFA in mechanical thrombectomy are not insignificant. The SWIFT PRIME, ESCAPE, REVASCAT, and EXTEND-IA trials reported severe access-related adverse events occurring in 2% to 12% of interventions.6-9 It is noteworthy that the potential for TFA complications extends beyond simply accessing the femoral artery, as various closure devices are frequently used after TFA procedures. These devices may fail and result in hematoma, cause vessel injury, or, rarely, embolize causing distal occlusion. The aforementioned TFA-related complications are associated with patient dissatisfaction, increased cost, need for blood transfusion, longer hospitalization, and increased morbidity and mortality.13

The need for safe vascular access is particularly important in patients presenting with acute ischemic stroke. These patients are often affected by other cardiovascular and/or cerebrovascular comorbidities that necessitate anticoagulation and/or antiplatelet therapy. Additionally, when appropriate criteria are met, many of these patients receive intravenous thrombolysis as part of the standard of care in the management of acute ischemic stroke. The cardiac literature has demonstrated that the rate of hemorrhagic access site complications is significantly increased in the setting of antiplatelet or anticoagulant use.14 Therefore, TRA (with its associated safety benefits compared with TFA) may be particularly well suited for patients who are candidates for mechanical thrombectomy.

As with TFA, preoperative cranial and cervical vascular imaging aids in preparation for catheterization of the target vessel using TRA. In addition to CTA of the head, it is our center’s practice to also perform CTA of the neck. Preoperative analysis of the cervical vasculature helps define the aortic arch anatomy, vessel tortuosity, and presence of tandem occlusion. No characteristics of these are absolute contraindications for TRA, but rather, the identification of certain features allows us to prepare for potential intraprocedural challenges.

The traditional classification of the aortic arch into types I, II, and III (with associated increasing difficulty of catheterization) is based on a TFA perspective. However, this does not necessarily reflect the challenges of catheterization of the great vessels when using TRA (Figure 1). For example, a type III arch itself does not necessarily predict difficult catheterization. Rather, it is our experience that the difficulty of catheterization may be related more to the angle and/or distance between the right subclavian artery and the target vessel. Although lesions on both the right and left sides have been accessed using TRA, the left vertebral artery may occasionally pose a challenge when using right-sided TRA. 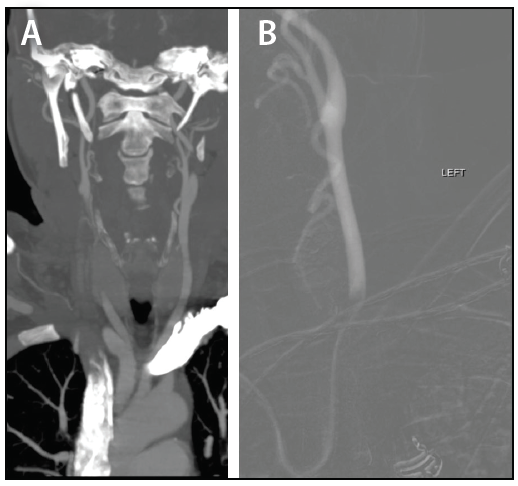 To date, no studies have described which anatomic configurations/orientations present challenges for catheterization from TRA. Our anecdotal experience suggests that a tortuous right subclavian artery may be associated with difficulty in catheterizing the great vessels due to a loss of one-to-one torqueability of the catheter. We have also observed challenges in catheterization of the left common carotid artery (CCA) when the innominate artery is located near and parallel to the proximal segment left CCA. We have noted this orientation in combination with proximal tortuosity of the left CCA to be particularly challenging when attempting to navigate the guide catheter into the cervical left internal carotid artery (ICA).

The size and body habitus of the patient may also influence the site of vascular access. We have found TRA to be especially advantageous over TFA in obese patients, in whom TFA can be difficult. However, catheter length may be a limitation for right TRA in tall patients with left-side lesions. With increasing experience using TRA for mechanical thrombectomy, our ability to predict its failure (and the need to use TFA) based on preoperative imaging has improved. None of the aforementioned anatomic orientations have been 100% sensitive in predicting TRA failure. Therefore, it is our routine practice to proceed with TRA even in the presence of one of these anatomic orientations but also to prepare for TFA in case TRA fails. Given the time-sensitive nature of mechanical thrombectomy for acute ischemic stroke, our threshold for crossover to TFA is lower compared with that for other neuroendovascular procedures (eg, aneurysm coiling, carotid stenting).

We routinely use right-sided TRA. Patients are positioned with the right arm supinated along the body and with slight wrist extension. Although we do not routinely use ultrasound for placement of the sheath, others have reported its regular use without adverse effects on time.12 In our practice, a palpable radial pulse has been sufficient for the placement of a 6-F slender sheath (Glidesheath Slender, Terumo Interventional Systems) without adverse effects. Initial radial arteriography is performed for evaluating collateral flow and artery loops that would hinder TRA. From this injection, a road map is obtained, which we have found useful in navigating a Glidewire (Terumo Interventional Systems) and catheter past the frequently encountered tortuosity and branch vessels of the radial artery. A radial artery cocktail of 2.5 mg verapamil, 200 µg nitroglycerin, and 2,000 IU heparin is routinely administered (heparin is omitted in patients who have received intravenous thrombolysis).

We routinely employ a 6-F triaxial construct with the Solumbra technique for mechanical thrombectomy when using TRA (Figure 2). A 6-F, 95-cm Benchmark guide catheter (Penumbra, Inc.) with a Simmons 2 Select catheter (Penumbra, Inc.) are advanced over a 0.035-inch guidewire. The Select catheter is reconstituted as previously described,12 and the target vessel is catheterized. A cervical CCA injection is performed, and the Benchmark catheter is then delivered to the distal cervical ICA. A 5-F, 125-cm Sofia aspiration catheter (MicroVention Terumo) and a Velocity microcatheter (Penumbra, Inc.) are advanced over a microwire (Synchro2, Stryker) to bring the triaxial system up to the site of occlusion.

Figure 2. Anteroposterior angiographic image demonstrating initial access for a left M1 occlusion (A). The Simmons Select catheter is seen in the proximal left CCA. Anteroposterior angiographic image demonstrating the Solumbra technique (B). The Benchmark catheter (solid arrow) is seen in the vertical segment of the petrous ICA; the 5-F Sofia catheter (hollow arrow) is seen proximal to the deployed Solitaire revascularization device (Medtronic; double arrows). Recanalization was achieved after one pass (C).

Although we do not typically use balloon guide catheters for mechanical thrombectomy, TRA does not prohibit their use. Others have described the successful use of 6-F balloon guide catheters for mechanical thrombectomy using TRA.10-12 We have also treated tandem occlusions using TRA with the Precise stent (Cordis, a Cardinal Health company) and the carotid Wallstent endoprosthesis (Boston Scientific Corporation). Nevertheless, depending on the manufacturer, larger stent sizes (> 10 mm) may require an 8-F system, which could be a potential limitation for TRA. Sheathless 0.088-inch guide catheters may be used with TRA. However, when using larger guide catheters in a sheathless manner, we advocate for preoperative evaluation of the radial artery with ultrasound to confirm adequate luminal size.

LITERATURE ON TRA FOR MECHANICAL THROMBECTOMY

Despite many thousands of patients and more than a decade of experience by interventional cardiologists, TRA is only beginning to be adopted by neurointerventionalists. With its increasing use, many apprehensions of its adoption for neuroendovascular procedures are proving to be unfounded or easily overcome. With the significant access site complication benefit and no loss of procedural efficacy, TRA has the potential to become the routine site of vascular access in the neurointerventional angiography suite. Due to the frequent presence of cardiovascular and/or cerebrovascular comorbidities (often necessitating anticoagulation or antiplatelet therapy) and the frequent administration of intravenous thrombolysis, patients undergoing mechanical thrombectomy for acute ischemic stroke may be well suited to reap the benefits of TRA.

When Is Stroke Thrombectomy Futile or to Be Avoided?