What Is the Relevance of Time in Acute Stroke Treatment?

Evaluating the impact of time in the treatment of large vessel occlusion strokes, considering reperfusion therapies, neuroimaging, and stroke pathophysiology.

Acute ischemic stroke due to large vessel occlusion (LVO) is a neurologic emergency. It is characterized by immediate ischemia with eventual progression to infarction in the absence of acute reperfusion therapy. Although initial experience suggested that the benefit of treatment is time-sensitive, more recent data suggest that a subset of the population has high ischemic tolerance and continues to benefit from mechanical thrombectomy, even at a late time window. In the current era, the question arises: what is the relevance of time in acute stroke treatment?

In 1995, the success of the National Institute of Neurological Disorders and Stroke tissue-type plasminogen activator trial introduced a paradigm shift in the treatment of acute ischemic stroke.1 Time became an integral consideration in selecting patients for reperfusion therapy and was a vital factor to achieving favorable outcomes. Subsequent trials explored different time windows for therapy, and evidence of treatment effect was found at up to 4.5 hours from stroke onset.2 Stroke systems of care were streamlined to be efficient and aimed for rapid transfer, triage, and thrombolysis. Heightened awareness of the impact of time delay in contributing to brain tissue lost during ischemic stroke was epitomized by the phrase “time is brain.”3 It was quantified that approximately 2 million neurons are lost per minute in the absence of acute reperfusion therapy.3

In 2015, five landmark trials established thrombectomy as the standard of care for LVO strokes. A major criterion for patient selection in all the trials was time from symptom onset, ranging from 0 to 6 or 12 hours.4-8 A meta-analysis of pooled individual patient-level data of the early window trials (HERMES collaboration) indicated that the benefit of thrombectomy over medical management was nonsignificant after 7.3 hours of stroke onset.9 The REVASCAT trial investigators concluded that for every 30-minute delay in reperfusion, the odds of achieving a good outcome decreased by 26%.10 This strengthened the widely held consensus on the time-dependent nature of stroke pathophysiology in the setting of an LVO. Consequently, societal guidelines offered a class IA recommendation for thrombectomy up to 6 hours from stroke onset.11

In 2017, the DAWN and the DEFUSE 3 trials extended the time window of thrombectomy from 6 hours to 24 hours.12,13 A key feature in these trials was the use of advanced imaging for patient selection, therefore favoring a tissue-based paradigm, especially for patient selection beyond the conventional 6-hour time limit. In 2018, American Heart Association (AHA)/American Stroke Association (ASA) guidelines were updated, and thrombectomy was recommended within up to 24 hours.14 A majority of patients with acute ischemic strokes present within 24 hours of time last known well and thereby reduces the relevance of time, per se, for consideration to treat with thrombectomy.15

Given the current evidence, AHA/ASA guidelines enforce a time-based approach to patient selection.16 Time is a surrogate of stroke biology, and the assumption is that most LVO strokes in the 0- to 6-hour window have sufficiently viable penumbra (mismatch), and hence advanced imaging is not required. Beyond 6 hours, the proportion of LVO strokes with an acceptable mismatch is unknown and possibly declines, thereby necessitating the use of advanced imaging (CT perfusion or MRI).17-20 Recent literature suggests that the number of LVO strokes with mismatch detected by noncontrast CT is similar in the early and late time windows, and outcomes comparable to early window LVO strokes can be achieved in the late window using CT Alberta Stroke Program Early CT Score (ASPECTS).18,19 Additionally, LVO strokes with a small ischemic core and acceptable mismatch have been detected well beyond the 24-hour window20,21 (including up to 6 days22), with postthrombectomy outcomes comparable to patients treated within 24 hours.21

Measurement of ischemic core and penumbra using advanced imaging, coupled with the success of late-window trials, have confirmed the presence of distinct LVO stroke phenotypes: “fast progressors” and “slow progressors” of infarct growth.23,24 The well-known dictum of “time is brain” has been revisited.3 The range of neurons lost per minute is large (< 35,000 to > 27 million).25 Most (approximately 55%) LVO strokes are slow progressors, while a minority (approximately 25%) are fast progressors.24 However, the infarct growth rate is dynamic, and a continuous spectrum and intermediate progressors may also exist. Although reasons for and predictors of variable infarct growth rate are under investigation, it is well recognized that the robustness of collateral blood flow is a major factor, along with innate tissue resistance to ischemia. Table 1 summarizes important differences between fast and slow progressors. 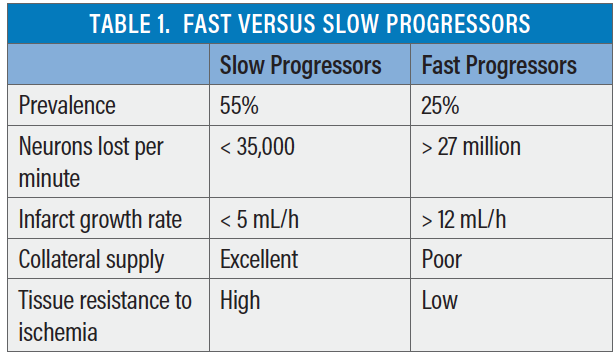 This has been observed in the randomized controlled trial and registry-level data. In the early window, patients with LVO strokes undergoing thrombectomy after transfer from a spoke hospital fared poorly when compared with direct admissions in the SWIFT PRIME trial and the STRATIS registry (52% vs 60%; P = .02).26,27 In the late window (DAWN trial), no such differences were observed between the transfer and direct admission groups (53% vs 46%; P = .44).28 This suggests that early window criteria (CT ASPECTS ≥ 6) enriches for slow progressors but also includes a few fast progressors, compared with the stricter criteria in the late window (DAWN/DEFUSE criteria) selecting only slow progressors. Hence, relative delay in reperfusion among transfer patients who were a mix of fast and slow progressors (early window patients selected by CT ASPECTS) had a higher “penalty of time” compared with mostly slow progressors (late window patients selected by CT perfusion or MRI). Penalty of time is not restricted to time delays caused by transfer or intrahospital workflow; it also includes time delays caused by advanced neuroimaging and postimage acquisition software processing. This may be referred to as penalty of imaging. Table 2 demonstrates the complex relationship between time, neuroimaging, stroke pathophysiology, and treatment effect. 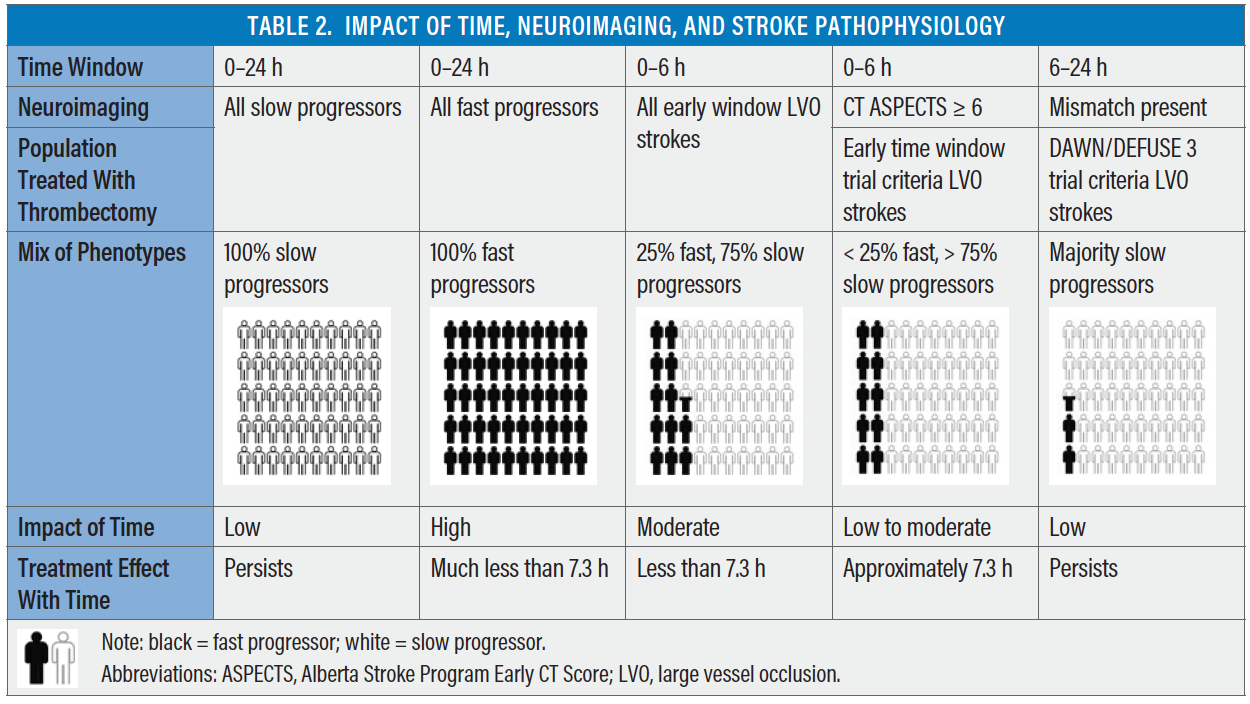 How relevant is time in acute stroke treatment (Table 3)? Two randomized clinical trials have provided strong evidence that thrombectomy is superior to medical management up to 24 hours from stroke onset or time last known well, and this has been endorsed by societal guidelines around the world. To consider a patient for thrombectomy, time is irrelevant. Favorable tissue status, defined by size of the ischemic core (< 70 mL) and presence of large penumbra as identified by clinical-core mismatch or target mismatch (perfusion imaging), is more important than time from stroke onset. Additionally, a majority of patients in the DAWN trial (approximately 88%) and DEFUSE 3 trial (approximately 70%) had either wake-up strokes or unwitnessed onset strokes. This has also been observed in clinical practice and indicates that a large proportion of LVO strokes presenting beyond 6 hours of time last known well may actually be within 6 hours of true stroke onset. However, secondary analysis of the DAWN trial data shows that treatment effect of thrombectomy persists irrespective of mode of stroke onset (wake up vs witnessed vs unwitnessed).29 Another dimension to time is the type of neuroimaging required (ie, 0–6 hours, CT ASPECTS and 6–24 hours, CT perfusion/MRI). Although guidelines are based on data from randomized controlled trials, recent retrospective data suggest that simplified CT-based selection is adequate and thrombectomy shows benefit even beyond 24 hours.

However, although time since last known well or time of stroke symptom onset does not appear to be an exclusion criterion for treatment consideration, the impact of increasing time to reperfusion on outcomes postthrombectomy remains relevant, particularly for intermediate or fast progressors. Early reperfusion decreases final infarct volume, and final infarct volume is a strong predictor of outcome. It appears that time has little impact on outcomes in slow progressors in the 6- to 24-hour window. However, intermediate progressors exist and are likely sensitive to time delays. The advent of late-window recanalization raises new questions. For example, does the duration of penumbral ischemia before reperfusion have an impact on outcomes? If so, time to reperfusion will gain another dimension of relevance beyond the infarcted core.

Should We Still Care About Core Volume for Stroke Thrombectomy?