An overview of updates to endovascular and interventional CPT coding for your practice.

This article describes coding changes for endovascular and interventional procedures that took effect on January 1, 2020.

Branched (bifurcated) endografts to repair iliac artery disease have been approved by the FDA, and the procedures to implant the devices are now sufficiently described in the literature to warrant category I CPT codes. The category III code that has previously described this service (0254T) has been deleted. Two new codes, 34717 and 34718, have been added, which describe placement of a bifurcated endograft in the common iliac artery with extensions into both the internal and external iliac arteries.

34718 is reported when this service is performed as a stand-alone procedure, either to repair isolated iliac disease as a separate procedure or to extend a previous endograft repair of the aortoiliac vessels at a separate setting. 34718 is not an add-on code. It cannot be reported with any other code for endograft placement, including codes for aorto-aortic tube endorepair.

Like other endograft codes, the new codes for branched iliac endograft placement include many of the procedural components. Preprocedural sizing and device selection are included and not separately reported. All iliac artery catheterizations for the ipsilateral side are included, regardless of entry site or approach. This includes all catheterizations of the aorta as well as the ipsilateral common, external, and internal iliac arteries. Any angioplasty or stenting performed in the treatment zone are included and not separately reported. Deployment of the device components, as well as any extensions placed in the ipsilateral common iliac, external iliac, or common femoral arteries are included (34709, 34710, 34711 are not reported for ipsilateral extensions of the branched iliac device). All angiography and radiologic supervision and interpretation are included.

Vessel access is not included and may be reported separately if a surgical exposure is required. 34713 may be separately reported with 34718 if percutaneous access is performed with a sheath ≥ 12 F.

Both codes (34717 and 34718) may be reported for repairs of aneurysm, pseudoaneurysm, dissection, arteriovenous (AV) malformation, and penetrating ulcer.

Codes 34717 and 34718 specifically describe placement of branched devices. Although a “branched” type of device can be created using side-by-side stents or a chimney technique, these codes are not reported for placement of devices other than those designed as unique branched (bifurcated) endografts. Instead, arterial stent placement codes (37236 if treating aneurysmal disease, 37221 if treating concomitant occlusive disease) would be used to report placement of a stent into the hypogastric artery at the time of iliac endograft placement when the hypogastric device is not a component of a specifically indicated branched device.

If 34717 is performed bilaterally, report code 34717 twice. If 34718 is performed bilaterally, report 34718 for the first procedure and 34718 with a −50 modifier for the contralateral procedure. This difference in reporting is because 34717 is an add-on code, already valued as an additional service and not subject to the 50% surgical reduction rule for surgical codes that are not add-on codes.

The code family for pericardiocentesis and pericardial drain placement is revised and updated for 2020. The previous codes (33010, 33011, and 33015) have been deleted. New codes 33016, 33017, 33018, and 33019 have been added to describe these services. Because imaging guidance is generally used to perform these procedures, the typical forms of imaging guidance are bundled into the codes. 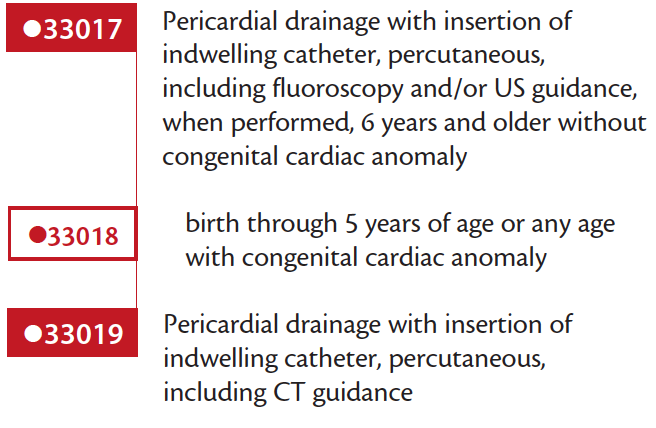 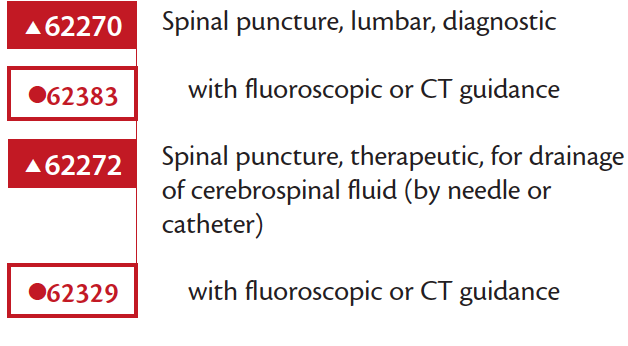 Code 33275 was modified to clarify that imaging guidance is included in the service. The bolded language was added. The service described is not changed.

Two new codes are added to CPT in 2020 to replace G-codes previously used to describe duplex services for evaluation of arterial inflow and venous outflow prior to the creation of a new hemodialysis access.

To report these codes, complete assessment of both the arterial inflow and venous outflow for the extremity must be performed and reported. If only the arterial vessel(s) is assessed, the study is reported with 93930 or 93931 if the elements required to report those studies are performed and documented. If only a venous assessment is performed, codes 93970 or 93971 may be reported if all the necessary elements are performed and reported. Codes 93985 and 93986 do not include physiologic arterial evaluation of the extremity(s), and those services may be separately reported if indicated, performed, and documented.

A new category III code has been added to describe percutaneous placement of an AV anastomosis implant. This is an investigational procedure to treat refractory hypertension and will probably be performed within an investigational study initially. Code 0553T is intended to be inclusive of the entire service, including catheterization of the iliac artery(ies) and veins, all procedural imaging and imaging guidance, creation of the AV fistula, angioplasty and/or stent placement in the iliac or femoral artery and/or vein, and placement of a device to maintain direct flow from the iliac artery to the iliac vein. US guidance for puncture of the artery and vein should not be separately reported.

The service includes portal vein catheterization from any approach, all diagnostic imaging and imaging guidance, as well as infusion of islet cells.

Several new category III codes were added for new technology for heart valve repair. Right and left heart catheterization intrinsic to the valve repair procedure is included in these codes and is not separately reported. Diagnostic coronary angiography is not separately reported when performed as confirmatory information of previous studies or when used for roadmapping, procedural guidance, completion angiography, or for measurements.

Codes 0544T, 0545T, 0569T, and 0570T include vascular access, cardiac catheterization, deployment, and any adjustment of the device(s)and access vessel closure. Temporary pacemaker insertion for rapid pacing is included when performed with 0544T and 0545T and is not separately reported. 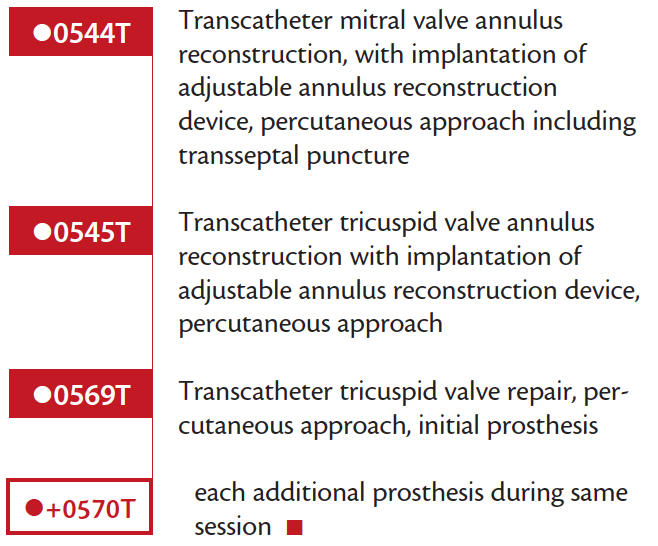