The impact and continuing development of image fusion for planning and guiding vascular repair.

Originally simply based on a volume rendering of the vascular anatomy, image fusion has evolved toward a more elaborate 3D model that integrates the surgeon’s operating plan. This strategy can include planning for proximal and distal stent graft landing zones, ostia of target vessels with optimal gantry angulations for catheterization (Figure 1 shows the lateral view for superior mesenteric artery catheterization), dissected aorta true and false lumen entry tears, and occluded vessel centerline and lumen boundaries along the planned recanalization pathway (Figure 2). Thus, standard 2D fluoroscopy is reshaped into a live augmented fluoroscopy environment. 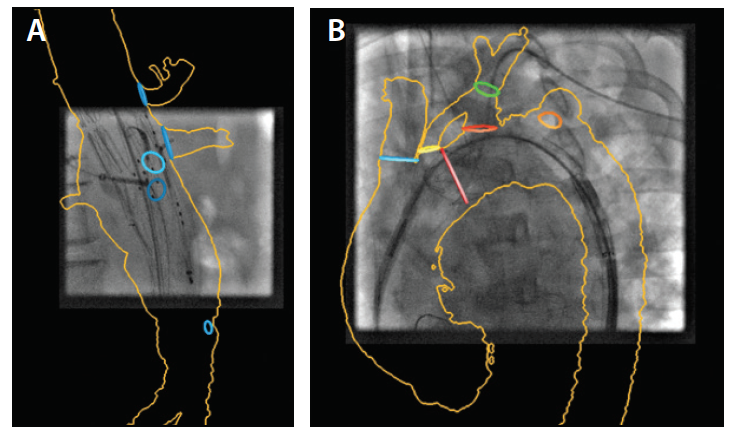 Figure 1. EVAR guided by image fusion (Discovery IGS 740 HOR equipped with EVAR Assist, GE Healthcare). The 3D model associates the aortic silhouette with the landmarks positioned by the operator. Graft landing zone and target visceral (A) and supra-aortic (B) vessel ostia are identified with planning circles, with optimal gantry angulations for their selection stored during planning and recalled from tableside for guidance. Several rendering modes and opacity options are available to display landmarks without obscuring live fluoroscopic visibility. Image fusion also allows gantry and table positioning without the use of x-ray, further reducing radiation exposure. 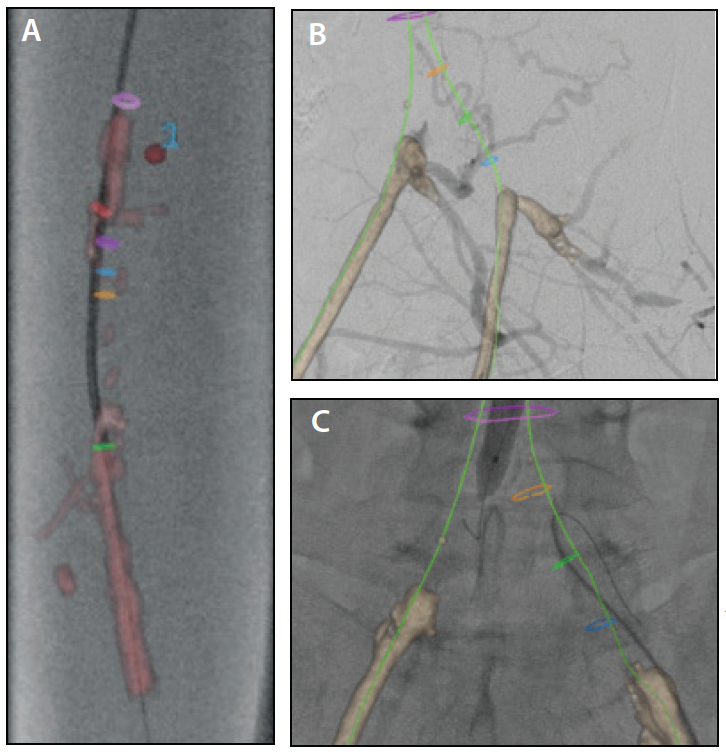 Figure 2. Endovascular recanalization of the superficial femoral (A) and iliac (B, C) arteries guided by image fusion. Vessel centerline and lumen semiautomatically extracted from the preoperative CT (Vessel Assist, GE Healthcare), with manual adjustment of the recanalization path through the occlusion. Planning lines defined on CT to provide lumen boundaries, avoiding calcifications, and planned stent position. Calcifications extracted from CT are used as landmarks for accurate registration.

Although earlier iterations of fusion required 3D/3D registration using a preoperative CBCT, fusion has become easier to use, now only requiring registration on two 2D views, with full control from tableside. With the initial registration based on bones and calcifications, registration typically needs fine-tuning from tableside based on angiographic runs. Ease-of-use improvements along with step-by-step guided workflows have reduced the operator learning curve and facilitated standardization between sites.2 Further automation to simplify workflows, as well as more evidence of clinical outcomes, are expected to lead to wider adoption of the technology by the community and further-reaching benefits to patients.

Several challenges remain to be tackled over the next decade. Image fusion should aim to compensate for vascular distortion, especially of the iliac and the target visceral arteries,22-24 by including real-time or simulated aortic deformation due to stiff endovascular material insertion in the 3D overlaid model. Fusion inaccuracies due to arm position differences between CT and the live procedure, as well as cardiac and respiratory motion, should also be compensated for to improve guidance in arch repair cases.15