Transfemoral carotid artery stenting (TF-CAS) has been shown in multiple prospective randomized trials to carry twice the risk of stroke and death when compared with carotid endarterectomy (CEA).1-3 However, the increase in adverse neurologic events occurs during the periprocedural interval. Beyond 30 days, there is no further divergence in event rates, as evidenced by parallel stroke-free survival curves out to 10 years.3 This suggests that once a stent has been safely delivered, it affords the same durable protection from future stroke as CEA.

Two hypotheses have emerged to explain the increase in periprocedural adverse events seen with TF-CAS. The first hypothesis suggests that the passage of catheters and guidewires across a diseased aortic arch may release atherothrombotic material that can embolize to the brain. This is supported by the observation that not all cerebroembolic events after TF-CAS are in the distribution of the stented artery; some are in the contralateral carotid or vertebral arteries.3 The second hypothesis relates to the use of distal protection devices. A distal protection device is not functional until deployed, but it cannot be deployed without first traversing the carotid lesion. Loose atherothrombotic material can be released when the distal protection device traverses the lesion, resulting in cerebral embolization.

Two groups of investigators, working independently and unknown to each other, developed the concept of avoiding the aortic arch by placing a sheath directly into the carotid artery. This transcarotid sheath placement would serve a dual purpose: (1) stent placement directly into the carotid artery and (2) neuroprotection through flow reversal, achieved by connecting a side arm of the arterial sheath to a low-pressure vein in the leg while proximally clamping the common carotid artery. This robust, temporary flow reversal in both the internal and external carotid arteries would protect the brain from any embolic release associated with stent placement, carrying the emboli away from the brain. Both groups published a small series of cases in 2004 with no strokes or deaths.4,5

Following these two seminal publications, Silk Road Medical developed specific components for the transcarotid artery revascularization (TCAR) procedure. The ENROUTE® Transcarotid Neuroprotection System (Silk Road Medical) consists of an arterial sheath containing a side arm for flow reversal as well as a working channel for device delivery. The side arm is connected to an extracorporeal circuit, which incorporates a flow regulator and filter that is then connected to a sheath placed in the femoral vein. The first-in-human trial of this system was carried out in Dusseldorf, Germany (the PROOF study). Seventy-five patients underwent a successful TCAR procedure with no reported deaths and one reported minor contralateral stroke. MRI studies demonstrated that the incidence of silent ipsilateral brain infarction was 17.9%,6 which is comparable to the incidence seen in CEA and far less than the > 50% seen in TF-CAS.2

After the PROOF trial, the ROADSTER 1 trial was carried out in the United States. ROADSTER 1 was a prospective, single-arm, carefully audited trial in which 141 patients considered high risk for CEA were treated with TCAR. There were no major strokes, two (1.4%) minor strokes, and two unrelated deaths, resulting in a stroke/death incidence of 2.8%. There were no permanent cranial nerve palsies, procedure times were just over an hour, and local anesthesia was used in almost half of the TCAR procedures.7 After this trial, the procedure received FDA approval.

Treatment of carotid artery stenosis has evolved considerably over the past few years, and TCAR is increasingly used (Figure 1). To address initial concerns of higher rates of perioperative stroke due to release of atherothrombotic material, the ENROUTE Neuroprotection System incorporates a transcarotid sheath that facilitates temporary flow reversal during stenting. Based upon the remarkable results of the PROOF, ROADSTER 1, and ROADSTER 2 studies, TCAR is now widely accepted and has been enthusiastically embraced by patients and physicians. 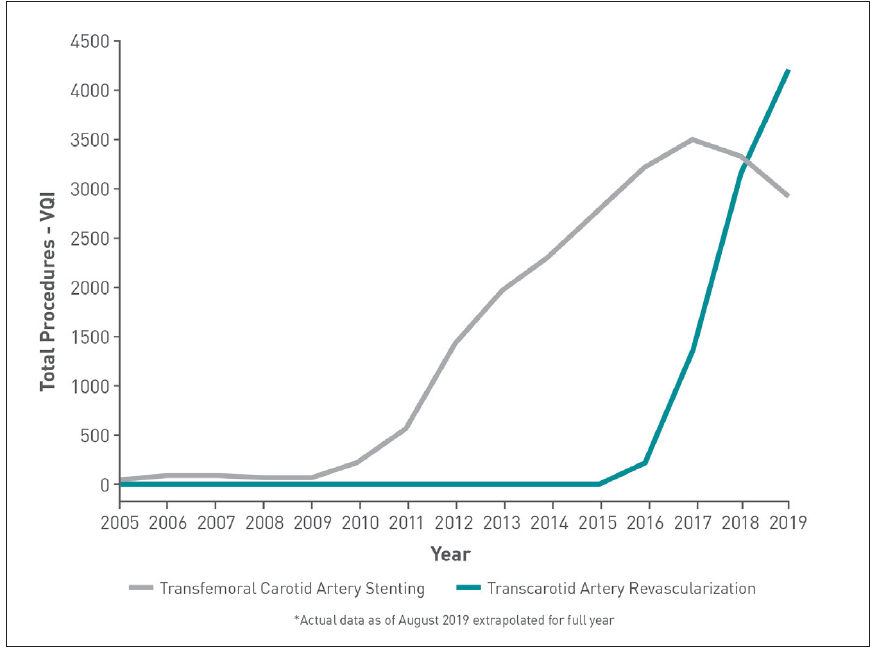 Figure 1. Trends in TCAR and TF-CAS based on Vascular Quality Initiative data (2019 extrapolated).*

The Benefits of Proximal Protection During Carotid Stenting