Case Report: Stenting for Subocclusion of the Right Common Iliac Artery Via a Transulnar Approach

The QualiMed QBX 18 balloon-expandable stent system is available under CE Mark only and is not approved in the United States.

Iliac endovascular interventions are commonly performed via a transfemoral approach. More recently, alternative approaches through the wrist arteries (mainly transradial but also transulnar) in selected patients have been proposed with the aim of reducing access site complications and possibly improving clinical outcomes. Yet, the small size of the forearm arteries makes iliac device miniaturization a critical issue for treatment diffusion.

There are currently very few low-profile devices with the necessary extended shaft length to perform peripheral revascularization via a 5-F transradial approach. Additionally, when performing iliac stenting, there are almost no low-profile balloon-expandable stents available that are suitable for true < 6-F arterial access, which is the accepted limit for safe transradial access in unselected patients.

This article describes the first implantation of the new QBX 18 (5 F) balloon-expandable iliac stent (QualiMed; Figure 1) through a 6-F coronary guiding catheter via a true 5-F transulnar access to treat iliofemoral disease in a patient who was not amenable for transfemoral access.

CTA documented diffuse calcific disease of the right external iliac artery (EIA), immediately distal to the previously implanted endoprosthesis, and a subocclusive stenosis at the junction with the CFA (Figure 2). After team discussion with vascular surgeons, percutaneous transluminal angioplasty was planned. 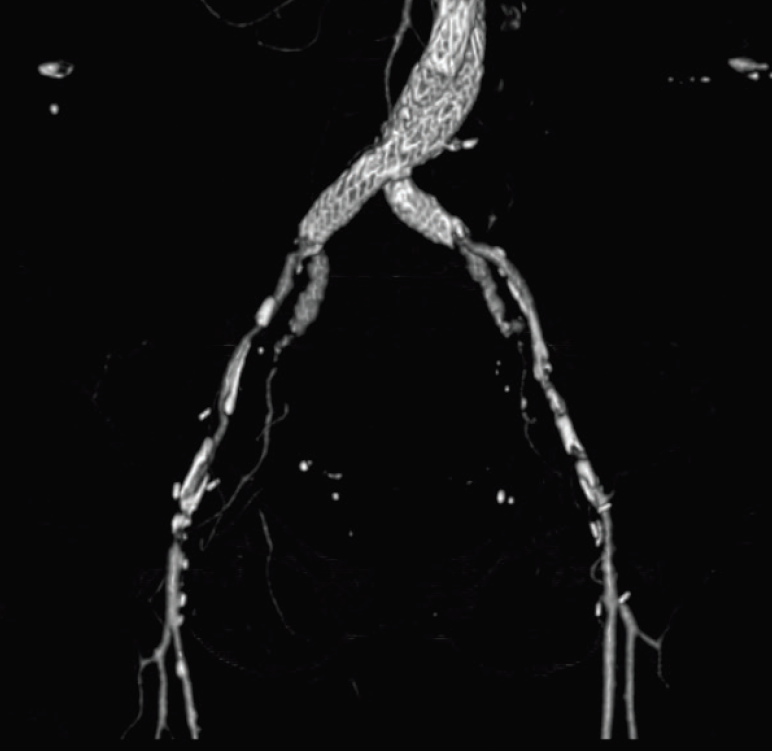 Due to the previous EVAR, a contralateral femoral approach was not feasible because the lesion location made ipsilateral retrograde access troublesome, and therefore an antegrade approach through the wrist was selected.

A 6-F, 125-cm-long multipurpose guiding catheter was advanced over a 0.035-inch J-tipped guidewire down to the descending aorta, and angiography was performed showing severe sequential stenosis of the right EIA and CFA with patent aortoiliac endoprosthesis.

After advancing the guiding catheter further down selectively into the right CIA, the lesion was crossed with a 0.018-inch, 400-cm-long wire, which was advanced into the right superficial femoral artery. An extended shaft length (180 cm) 6- X 40-mm balloon was advanced over the guidewire, and then predilation of both CFA and EIA was performed.

Two overlapping self-expandable nitinol stents (6 X 80 mm and 7 X 60 mm) with extended shaft length (180 cm) were deployed, starting from the CFA up to the EIA and then postdilated with the previously used 6- X 40-mm balloon.

Due to a residual significant focal stenosis in the segment between the stent and previously implanted endoprosthesis (Figure 3), the decision was made to implant a short balloon-expandable stent to optimize the result. The availability of the QBX 18 (5 F) cobalt chromium balloon-expandable iliac stent provided an opportunity to complete the procedure through the 6-F guiding catheter and avoid sheath upsizing. This newly developed stent with an extremely low profile was developed specifically to be delivered through a 6-F guiding catheter (5-F sheath). 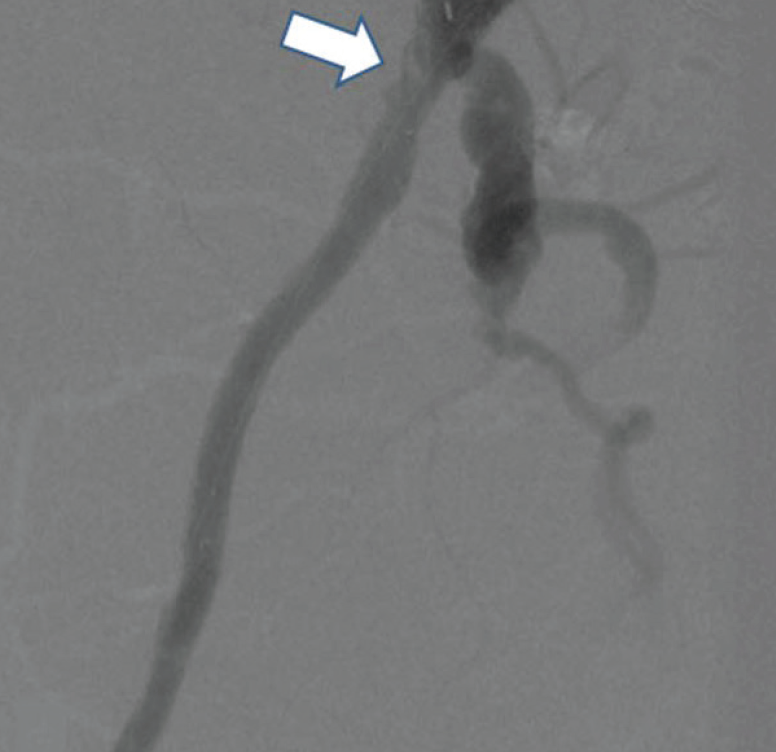 A 9- X 26-mm QBX 18 (5 F) stent was deployed into the proximal EIA, overlapping the previously implanted stent at one site and the distal end of EVAR at the other one (Figure 4A and 4B). Final angiography showed excellent result with no residual stenosis (Figure 5).

Figure 4. Fluoroscopic view of the undeployed (A) and deployed (B) QBX stent. 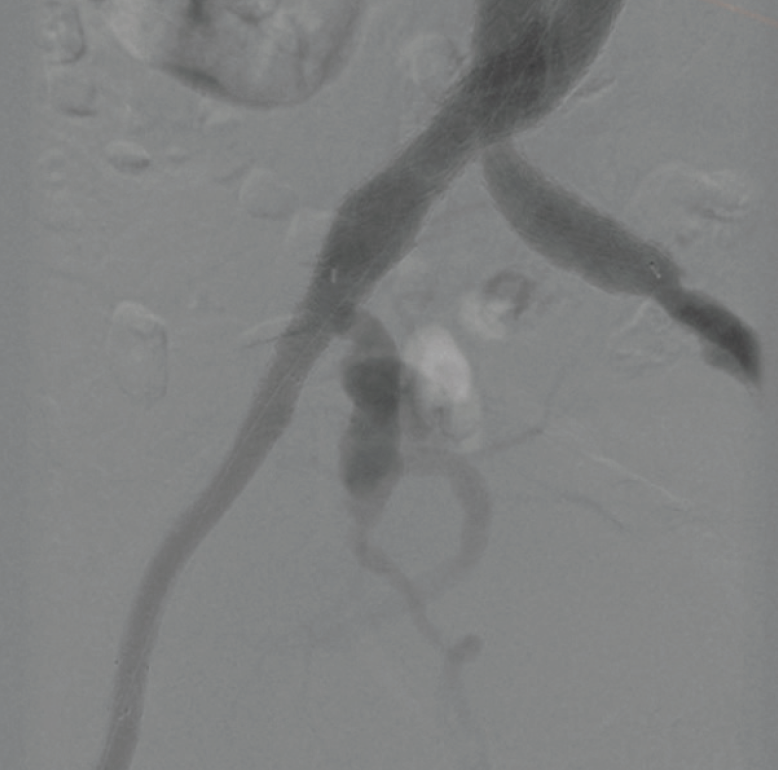 No periprocedural complications were noticed. The patient ambulated prior to discharge and reported marked improvement of claudication. A postprocedure Doppler ultrasound revealed patency of implanted stents with normal flow (peak systolic velocity, 1.5 m/sec). The patient was discharged on aspirin, clopidogrel, and a statin.

Recent technical improvements of peripheral devices have resulted in increased compatibility and distal support and have made it feasible to treat peripheral artery disease with a transradial or transulnar approach.

In the present case, we were able to implant a 9-mm-diameter balloon-expandable stent through a 6-F guiding catheter with a 5-in-6-F slender sheath, thus leaving behind a true 5-F hole at the entry site. This has two major implications: (1) This shows how iliac stenting can be performed by wrist access using the standard transradial coronary stenting technique, and (2) it opens the door for expanding the transradial approach selection to a broader range of patients with peripheral artery disease, including female patients or those with small radial arteries who are not otherwise amenable for transradial treatment.

The combination of new equipment, such as slender sheaths and the QBX 18 (5 F) balloon-expandable stent, may allow operators to safely and effectively perform iliac stenting by transradial or transulnar access. This can further prompt the adoption of a transradial approach for peripheral interventions.