At our clinic during the COVID-19 pandemic, we are currently only treating patients with critical limb ischemia (CLI), and we are not intervening for claudication. As we often experience, patients with CLI present to the clinic later in the disease process; with COVID-19, patients are showing up even later. This was the situation in the following case.

An 88-year-old man presented after several days of rest pain in his left leg. He had a history of chronic renal insufficiency as well as previous intervention in his right leg. Due to concerns about the COVID-19 pandemic, he delayed presenting to the hospital until the pain persisted over several nights.

A 4-F sheath was placed antegrade in the left femoral artery. Diagnostic angiography revealed severe calcium along the entire course of the superficial femoral artery into the distal popliteal artery, but without stenosis requiring treatment. Below the knee (BTK), the severe calcium continued with total occlusion of both the anterior and posterior tibial arteries (Figure 1A). The peroneal artery was also occluded and reconstituted distally; there was little flow to the foot and no flow to the forefoot (Figure 1B). It was decided to target the peroneal artery for primary intervention. 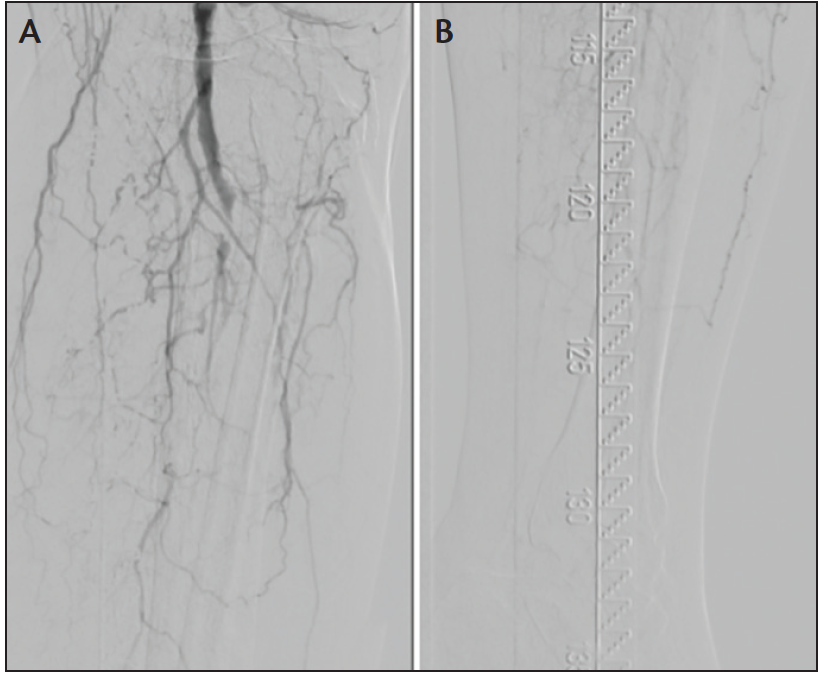 The sheath was then upsized to 5 F and a 0.014-inch guidewire was inserted through a 2- X 40-mm balloon as a support catheter for subintimal crossing of the occlusion (Figure 2). Using a balloon catheter for support allows for fewer device exchanges and the ability to perform immediate percutaneous transluminal angioplasty (PTA) after crossing. After several attempts, the peroneal occlusion was crossed, ballooned, and the guidewire was advanced just beyond the tibiotalar joint. The balloon was then exchanged for a 2.5- X 120-mm balloon for inflation along the vessel. 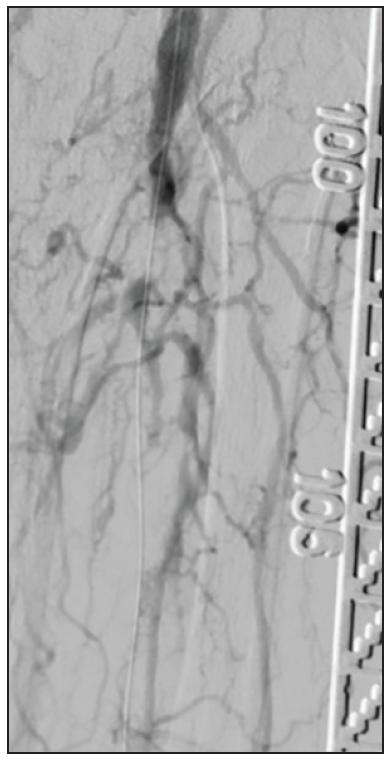 Figure 2. Occlusion was crossed with a 0.014-inch guidewire.

As an aside, the issue of balloon undersizing for BTK intervention has been widely discussed, but there are very little data to show what impact it has on luminal gain. To properly size a balloon in the setting of chronic total occlusion, the large amount of calcium helps. If intravascular ultrasound is not used, then using the heavy calcium to measure reference vessel diameter with quantitative vessel analysis helps ensure the balloon is not undersized.

After a long inflation with the balloon, we evaluated the result. Dissections are very difficult to see in BTK arteries for several reasons. The severe amount of calcium in the vessel is one, but small vessel diameter and bone also cause challenges with visualization. In this case, I used multiple angles and magnification. In reviewing the post-PTA angiograms, several dissections were noted along the entire course of the vessel, but in particular, the proximal segment of the peroneal just distal to the tibioperoneal trunk (Figure 3). 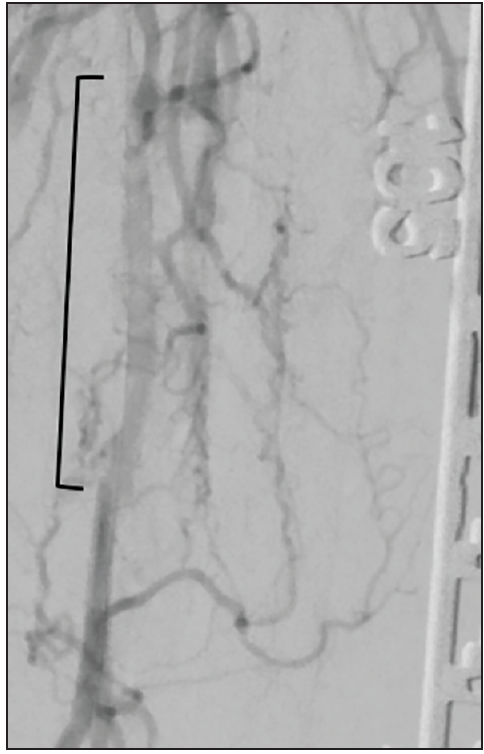 In my patients, I have noticed that not treating all dissections clearly correlated with restenosis and early loss of patency. Later, what I learned from the TOBA II BTK trial is to heal all dissections to give the patient the best opportunity for healing.

When placing Tack® implants using the Tack Endovascular System® (4F) (Intact Vascular, Inc.), I feel the pushability and trackability of the catheter is very good, and deployment is accurate. The use of a radiopaque ruler or roadmap/overlay is helpful to get the implant precisely where I want. I can also get the Tack implants into the distal third of the vessel, where I wouldn’t place a coronary stent. In this patient, several Tack implants were deployed and postdilated (Figure 4). After postdilating the Tack implants, the proximal peroneal artery had a nice result (Figure 5) and flow was restored to the forefoot, with brisk capillary refill at the end of the procedure. 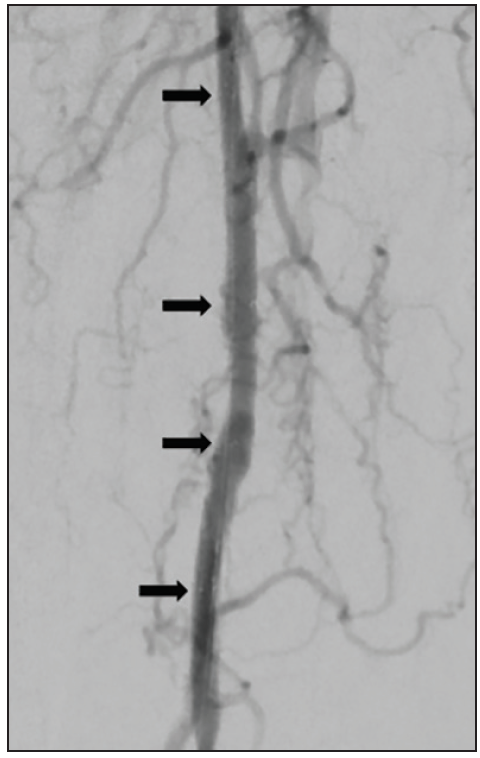 Figure 5. The long dissection was resolved with placement of four Tack implants.

When treating infrapopliteal disease in the setting of CLI, I feel there are two mandates. First, open the vessel, which is usually accomplished without too much difficulty. Second, provide a durable result in terms of patency, which is perhaps the most important mandate. This is particularly true in patients with tissue loss, such as patients with wounds or infections or those with a planned amputation. These patients depend on whatever flow we can provide for their healing. Overall, I feel that patency in CLI patients is directly related to mortality, so I prefer using Tack implants to give patients more time for healing.

Case Study: Navigating BTK Revascularization in the Epicenter of a Pandemic