A 69-year-old man presented with bilateral lower extremity rest pain. He also had a history of right fourth toe amputation for a nonhealing ulcer. His risk factors included a history of diabetes, hypertension, hyperlipidemia, and chronic renal insufficiency. After initial concerns about being exposed to COVID-19, he agreed to intervention at our Modern Vascular outpatient center.

Antegrade access was obtained in the right common femoral artery. Baseline angiography revealed extensive multilevel disease. The posterior tibial artery had multiple high-grade stenoses and was occluded distally. The anterior tibial artery had diffuse disease along the entire vessel, and the peroneal artery was also severely diseased (Figure 1). The medial and lateral plantar arteries failed to opacify with prolonged image acquisition. The distal anterior tibial artery and dorsalis pedis artery opacified with delayed dynamics, but the pedal plantar loop was not identified. 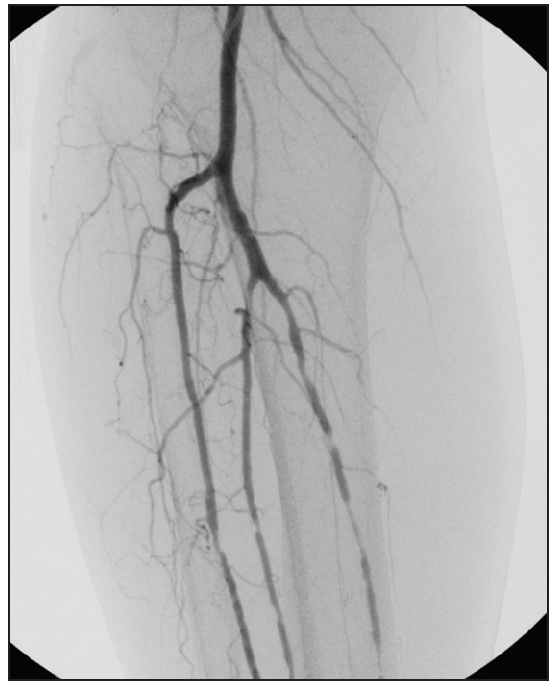 To gain access to the pedal circulation, atherectomy was performed in the tibioperoneal trunk and into the posterior tibial artery using a Rotalink with 2-mm burr (Boston Scientific Corporation), followed by percutaneous transluminal angioplasty (PTA) with a 2.5- X 100-mm plain balloon. A guidewire was then advanced below the ankle. Atherectomy was also performed over a second guidewire seated in the anterior tibial artery, followed by PTA with a 3- X 220-mm balloon. Pedal circulation was then restored with a 2- X 100-mm balloon in the medial plantar and a 2.5- X 200-mm balloon in the lateral plantar.

With significantly improved distal outflow to the foot, the focus of revascularization shifted proximally to the tibial arteries. In Modern Vascular labs, intravascular ultrasound (IVUS) is used in most below-the-knee (BTK) procedures for both vessel sizing and to evaluate acute procedural success. In this case, an Opticross 18 (Boston Scientific Corporation) was used to perform several cross-sectional measurements taken in the tibial arteries to ensure proper balloon size was selected (Figure 2). 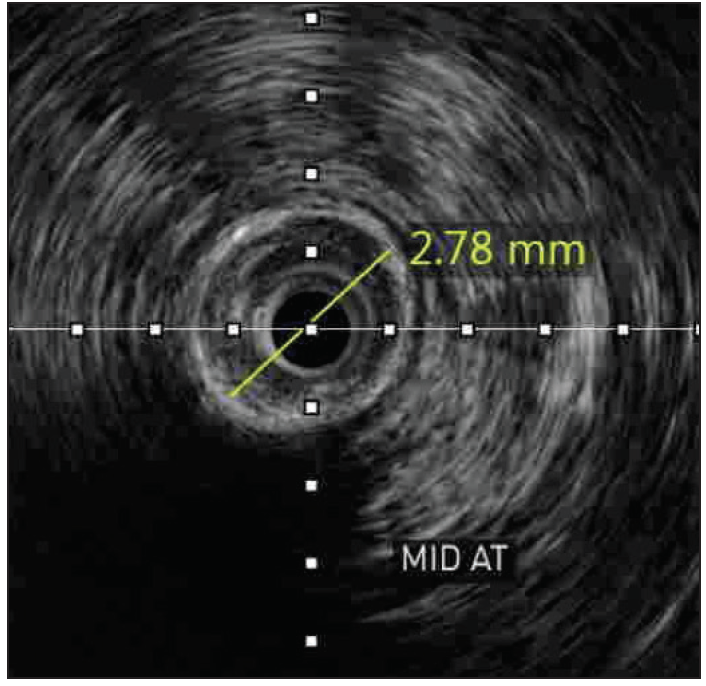 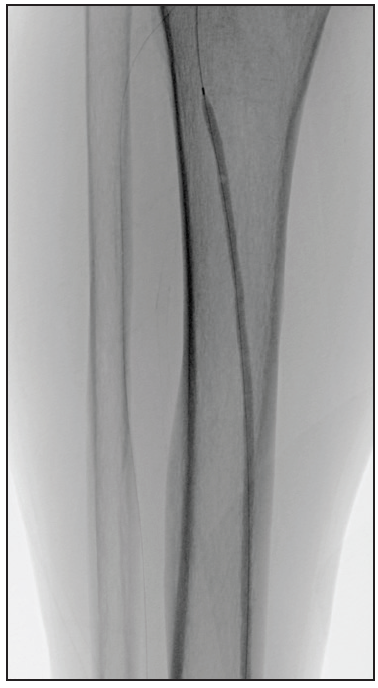 IVUS was then used to assess the results of angioplasty. Figure 4 shows one of several post-PTA dissections identified in the posterior and anterior tibial arteries. There was no visible dissection in the peroneal artery. It was decided to repair the dissections using the Tack Endovascular System® (4F) (Intact Vascular, Inc.). This device was recently approved in the United States to repair post-PTA dissections in the mid/distal popliteal and infrapopliteal arteries with vessel diameters of 1.5 to 4.5 mm (Figure 5). The catheter contains four preloaded nitinol implants that exert low chronic outward force and are resistant to external crush. Because each implant individually self-sizes to the diameter range described, multiple areas of dissection can be treated with a single system, as in this case. 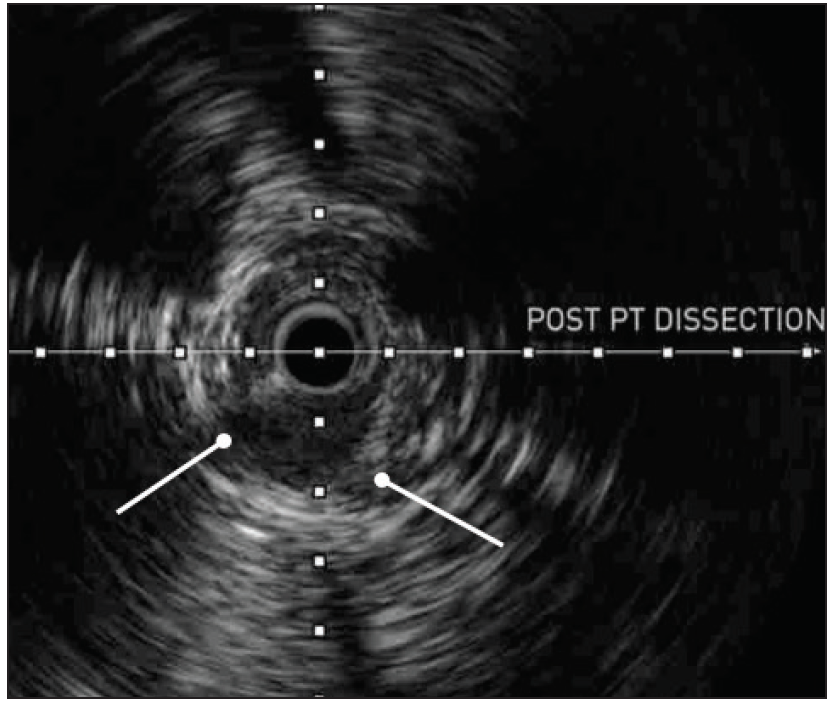 Figure 6. Multiple self-sizing implants on a single system can be used to treat dissections in different vessels. 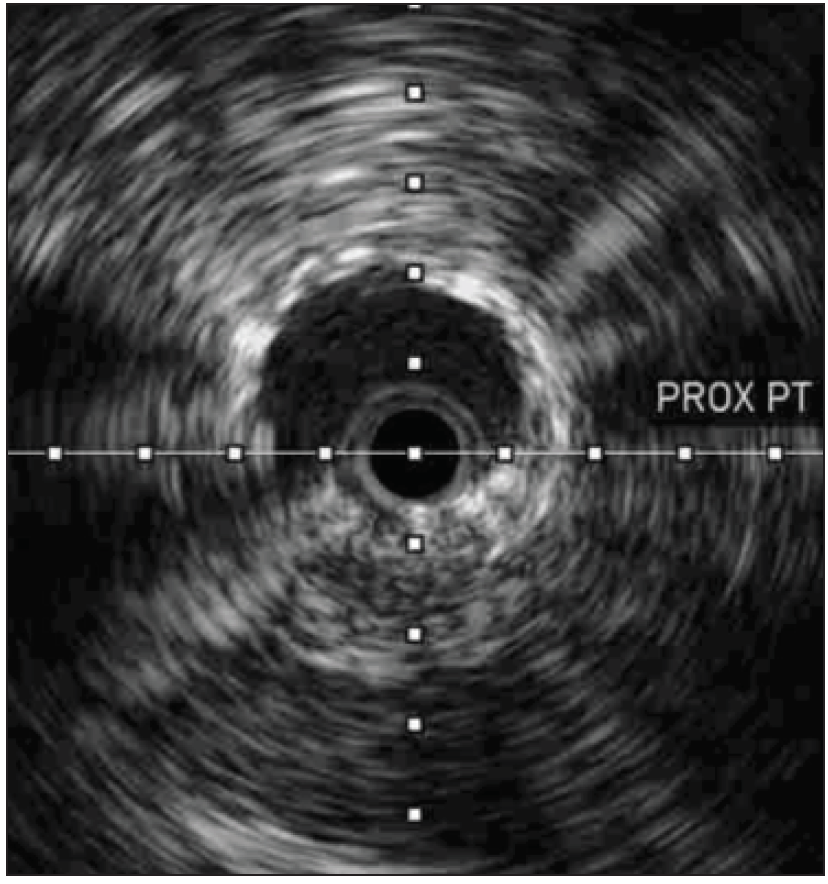 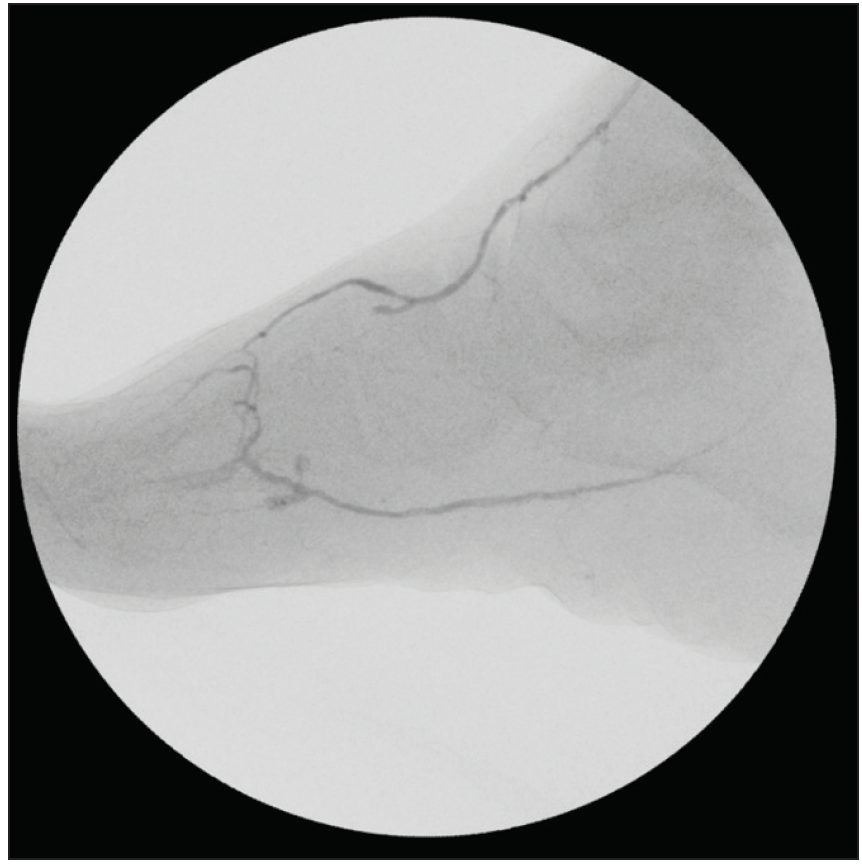 Figure 8. Angiography demonstrated flow restored to the level of the forefoot.

The Tack Endovascular System (4F) allows us to scaffold areas where off-label coronary stents are prone to crush, and its short length does not constrain vessel movement. There is an inherent inventory and economic advantage to having a single device that can be used to treat multiple vessels of varying diameters. This helps to reduce the number of visits required to fully treat chronic limb-threatening ischemia and may decrease the frequency of reinterventions.