A 72-year-old man with diabetes presented with gangrene of the third toe in the right foot and rest pain. The baseline angiographic study showed patency of the femoropopliteal arteries and extensive disease of the infrapopliteal arteries (Figure 1). The anterior tibial artery (ATA), posterior tibial artery, and plantar arteries were occluded, and the peroneal artery had multiple focal stenoses. The dorsalis pedis artery (DPA) was the only patent artery of the foot, and there was diffuse small artery disease. The aim of the procedure was to restore a direct flow line to the forefoot, and the only possible target was the DPA. 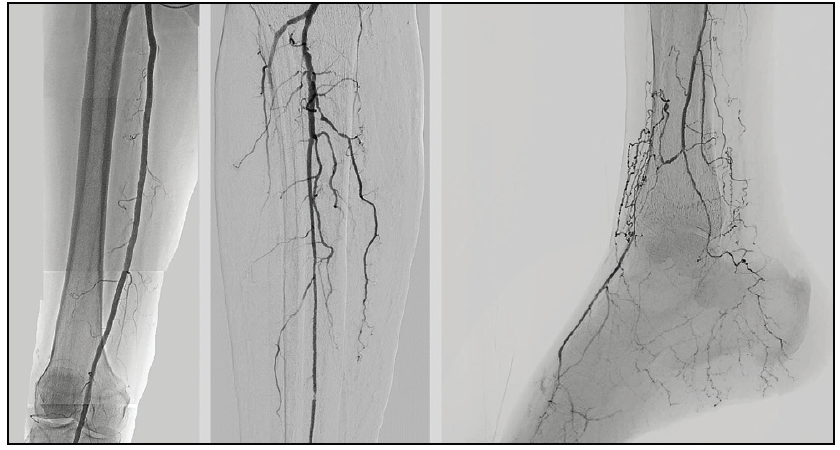 The procedure was performed via an ipsilateral 4-F antegrade femoral approach. After simple balloon dilatation of the distal peroneal artery, we tried an antegrade endoluminal approach of the ATA with an 0.014-inch guidewire. At the distal third of the ATA, it was impossible to progress, and we shifted to a retrograde approach (Figure 2). When there is a calcified DPA, we use a 30° to 45° contralateral oblique projection in which the artery is separated from the bones, easily visualized, and pierced with a 21-gauge needle. After retrograde wiring of the DPA with a 0.014-inch guidewire, the use of a support catheter is essential. The Carnelian® Support 14 microcatheter (BIOTRONIK) easily crossed the heavily calcified DPA and supported the wire (Figure 3). Through the catheter, we exchanged wires to one with a heavier tip load in order to perform retrograde crossing of the hard, occluded vessel segments and achieve the rendezvous with the antegrade approach. Balloon dilatation was performed. 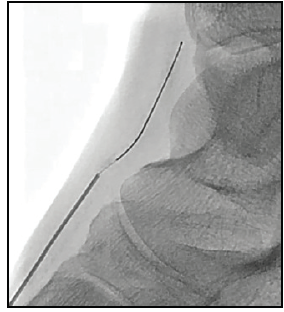 Figure 2. Retrograde puncture of the DPA. 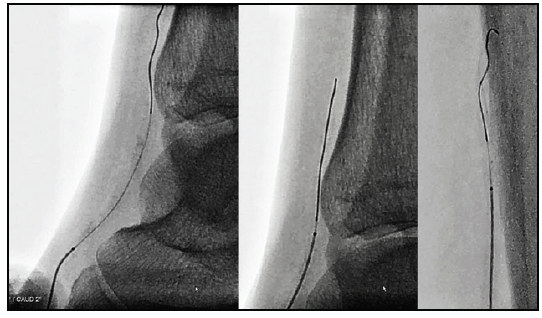 The final angiographic result demonstrated patency of the previously occluded vessel (Figure 4). The patient was submitted to third toe amputation and healed in 7 weeks. 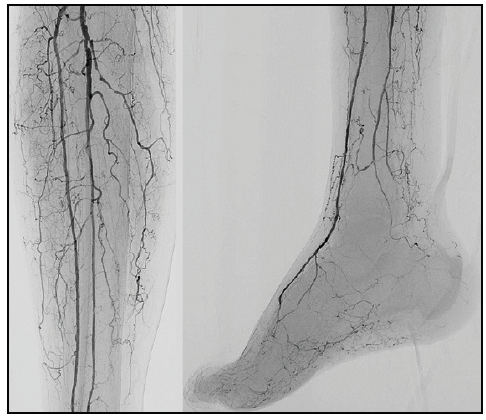 An antegrade recanalization approach can fail in up to 20% of cases.1 Retrograde approaches can favorably modify this failure rate. Support catheters with high trackability represent an essential tool for successful retrograde crossing.