A 77-year-old woman was referred to our vascular center for atypical rest pain in both legs (the left side was more severe than the right side). Her medical history revealed atrial fibrillation, arterial hypertension, stage 2 to 3 chronic renal insufficiency, and rheumatoid and psoriatic arthritis. The patient reported a failed attempt of revascularization of the left side in another hospital. MRA performed in the other hospital (not shown) demonstrated an occlusion of the superficial femoral artery (SFA), the popliteal artery, and all proximal segments of all three below-the-knee (BTK) arteries on the left side. On the right side, the SFA and popliteal artery were patent. The posterior and anterior tibial arteries were occluded, with a single-vessel outflow on the fibular artery.

Given the more severe symptoms on the left side, a revascularization procedure of the left SFA, popliteal artery, and BTK arteries in an ambulatory setting was planned and completed successfully with immediate relief of the rest pain. Given the good clinical outcome on the left side, an ambulatory revascularization procedure of the right lower leg was planned.

Antegrade access was achieved in the right common femoral artery under ultrasound guidance, and a 4-F introducer sheath was placed. Diagnostic angiography confirmed patency of the femoropopliteal segment and fibular artery, as well as an occlusion of both the posterior and anterior tibial arteries, and patency of the lateral plantar artery and a small dorsalis pedis artery (Figure 1). Attempts to cross the occlusion of the posterior and anterior tibial arteries were unsuccessful. Subsequently, selective angiography of the fibular artery was performed, demonstrating a small anterior collateral branch connecting to the dorsalis pedis and a large posterior collateral branch (with a corkscrew appearance proximally) with a connection to the lateral plantar artery (Figure 2). 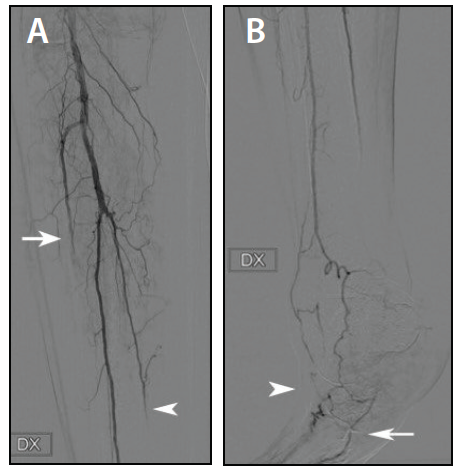 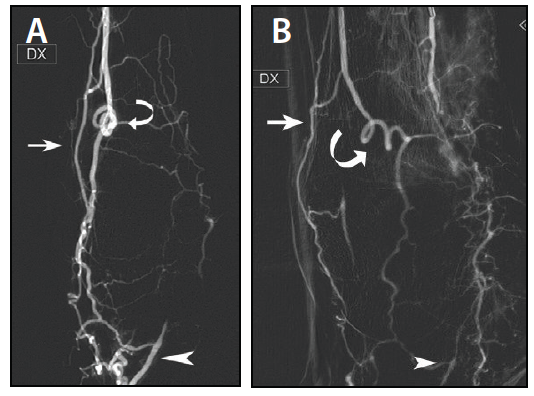 Figure 2. Roadmap image in anteroposterior (A) and oblique view (B) of the right foot obtained with selective injection of the fibular artery showing the anterior branch toward the dorsalis pedis artery (arrow), and posterior collateral (with corkscrew appearance; curved arrow) toward the lateral plantar artery (arrowhead). 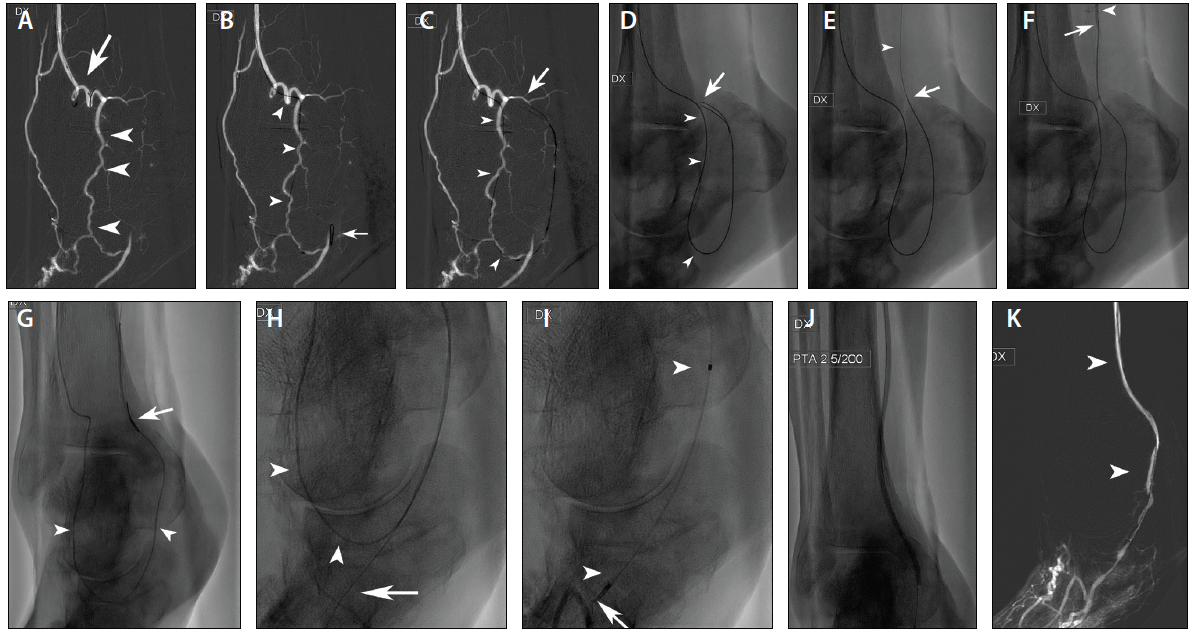 Control angiography demonstrated reconstitution of antegrade flow into the lateral plantar artery (Figure 3K) with a triphasic Doppler signal. Hemostasis was obtained with manual compression. The patient was discharged the same day and became fully asymptomatic.