A discussion of the PATHFINDER I postmarket trial and case experience from two centers demonstrating successful use of the Auryon laser in severely calcified lesions.

The Auryon laser atherectomy system (AngioDynamics, Inc.) is a 355-nm, solid-state, third-harmonic, Nd:YAG, short-pulsed laser cleared by the FDA for the treatment (including atherectomy) of infrainguinal stenoses and occlusions, including in-stent restenosis (ISR). The Auryon laser system has been shown to have higher affinity for plaque than for endothelium and no concern for causing thermal necrosis.1 A prospective, single-arm, multicenter, international, open-label study assessed the safety and efficacy of the Auryon laser atherectomy system in 97 patients. The study demonstrated safety and efficacy above and below the knee across all lesion types and calcification levels, including chronic total occlusions (CTOs) and ISR. There was no flow-limiting dissection or distal embolization. After Auryon laser atherectomy, a stenosis reduction > 30% was demonstrated in all lesion categories with atherectomy alone. Follow-up at 30 days and 6 months revealed patency rates of 96.8% and 85.6%, respectively.2

AngioDynamics is currently conducting the postmarket PATHFINDER I registry of the Auryon atherectomy device (NCT04229563). The United States–based multicenter, prospective, single-arm, observational postmarket registry is a pilot registry toward a large pivotal registry (PATHFINDER II). PATHFINDER I aims to evaluate the safety and efficacy of the Auryon atherectomy system in treating de novo restenotic and ISR lesions in infrainguinal arteries of patients with peripheral artery disease (PAD) in a real-world setting. The trial will enroll 100 patients across 10 sites in the United States, with primary endpoints of effectiveness and safety. The primary effectiveness endpoint is defined as acute, core lab–adjudicated procedural success (≤ 30% residual stenosis) after Auryon laser atherectomy and adjunctive therapy. The primary safety endpoint is defined as freedom from major adverse events, including unplanned target limb amputation, cardiovascular death, clinically driven target lesion revascularization, and target vessel revascularization. Follow-up at 6, 12, and 24 months will evaluate patency rate and clinical outcomes.3

This article details two laser atherectomy cases that demonstrate the device’s efficacy and safety both above and below the knee in severely calcified lesions, a CTO lesion, and ISR. The cases were performed in a hospital-based lab and an office-based lab. Both patients were enrolled in the PATHFINDER I postmarket trial.

A 61-year-old woman presented with severe claudication and rest pain. She was Rutherford class 5 with bilateral symptoms that were worse on the right side. Noninvasive imaging revealed severe PAD below the knees. Her risk factors included PAD with history of a slow-healing right lower extremity ulcer, diabetes mellitus, myocardial infarction, hypertension, and dyslipidemia. On examination, she had decreased peripheral pulses with coolness to her bilateral lower extremities. Arterial duplex ultrasound revealed monophasic waveforms in the distal anterior tibial artery, dorsalis pedis, and peroneal arteries at the ankle. Toe-brachial indices in the right and left extremities were 0.88 and 0.73, respectively. 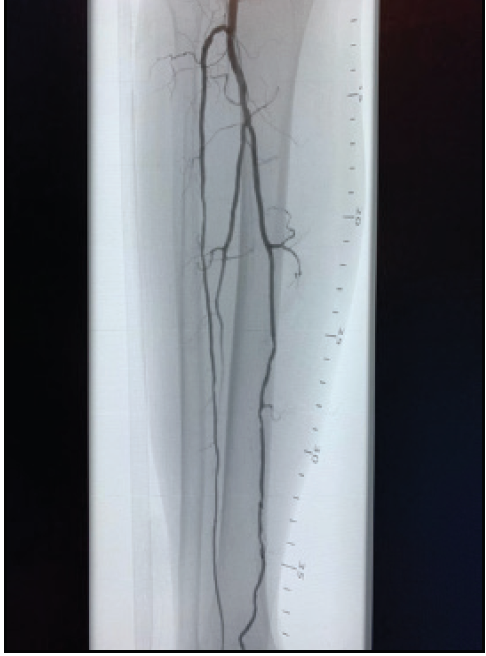 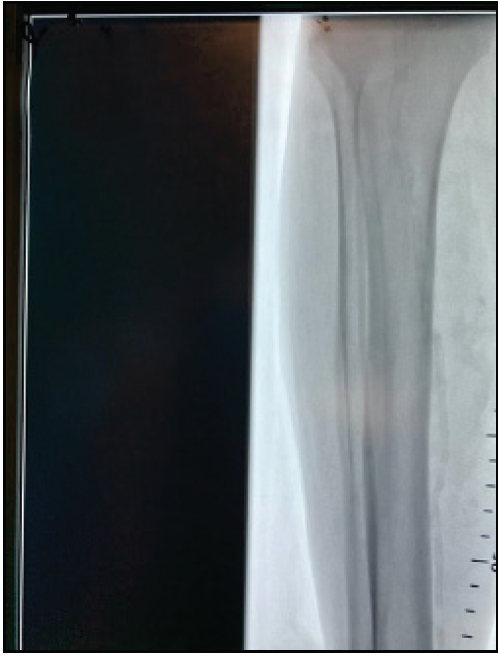 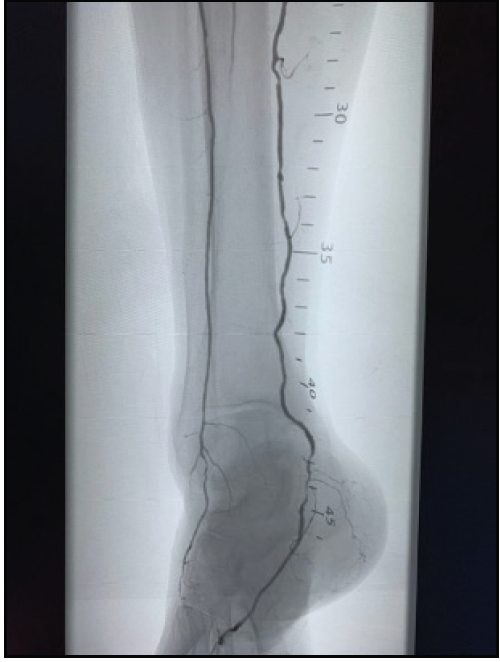 Figure 3. Severely calcified and tortuous posterior tibial and plantar arch with a long tubular 90% stenosis and 99% subtotal stenotic lesion in the foot.
(Courtesy of Hurricane Cardiology.)

A 6-F, 90-cm Destination sheath (Terumo Interventional Systems) was inserted up and over the iliac bifurcation and advanced into the right superficial femoral artery (SFA). A Sion black wire (Asahi Intecc USA, Inc.) inserted within a CXI catheter (Cook Medical) was advanced in the anterior tibial artery, across the lesions and into the distal dorsalis pedis artery. A second Sion black wire was inserted into a CXI catheter and advanced from the right posterior tibial artery into the plantar arch. There was difficulty advancing the wire past the lesions in the pedal arch. Given the severity of disease, it was felt necessary to improve outflow to ensure procedural success. A 1.5- X 12-mm Trek coronary balloon (Abbott) was inserted over the wire, and balloon angioplasty was performed in the severely tortuous and calcified mid-posterior tibial artery to predilate the lesions. The balloon was removed, and intravascular ultrasound revealed a vessel of approximately 2.5 mm in diameter, with severe 360° calcification. 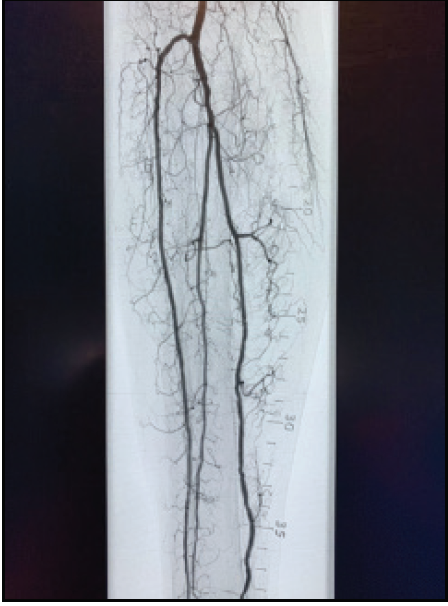 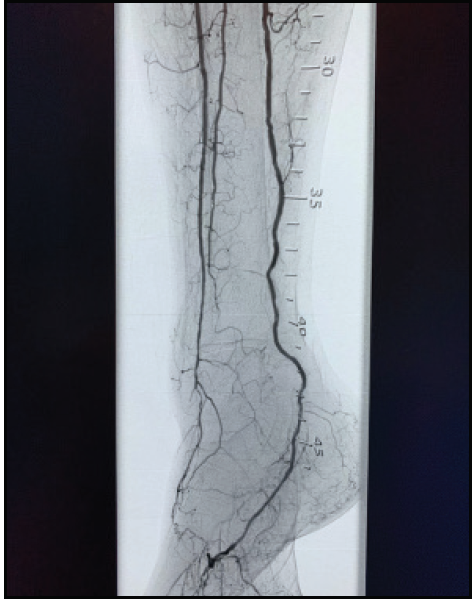 Case 2: Long Right SFA With ISR and CTO in an Office-Based Lab 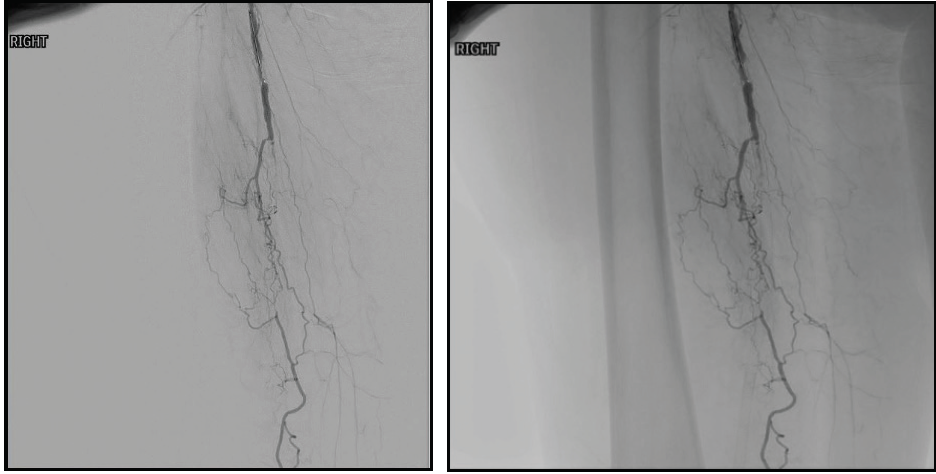 Crossing of the occluded long-segment SFA and occluded stents was achieved with a 0.014-inch Command ES wire (Abbott) and a 0.035-inch TrailBlazer catheter (Medtronic). A 6-mm SpiderFX (Medtronic) embolic protection device filter was placed into the popliteal artery. Laser atherectomy was performed using the Auryon Laser at a fluency of 50 mJ/mm2 for two passes, with an advancement rate of approximately 1 mm/sec throughout the in-stent segment with interval angiograms (Figure 7 and Figure 8). A 2- or 2.35-mm Auryon laser catheter device with aspiration is indicated for the treatment of ISR. The total lasing time was 4 minutes. Adjunctive therapy was completed with balloon angioplasty of the entire stented segment with a 5- X 200-mm NanoCross balloon (Medtronic), including the popliteal as well as the proximal SFA (Figure 9). Completion angiography was performed through the sheath in the right common femoral artery of the entire right leg, with runoff to the foot. The sheath in the left common femoral artery was removed and the puncture site was closed with a Celt closure device (Veryan Medical). Excellent luminal gain was achieved with improved flow (Figure 10). 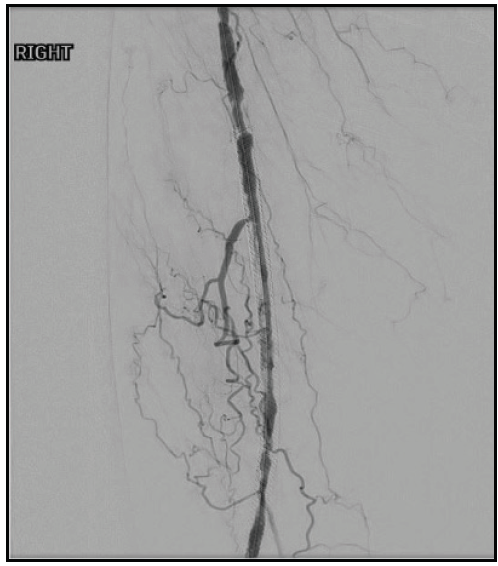 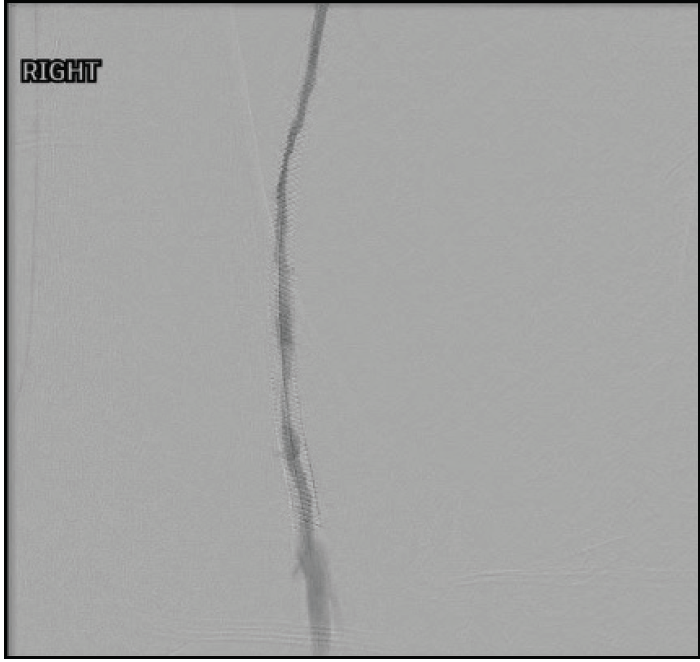 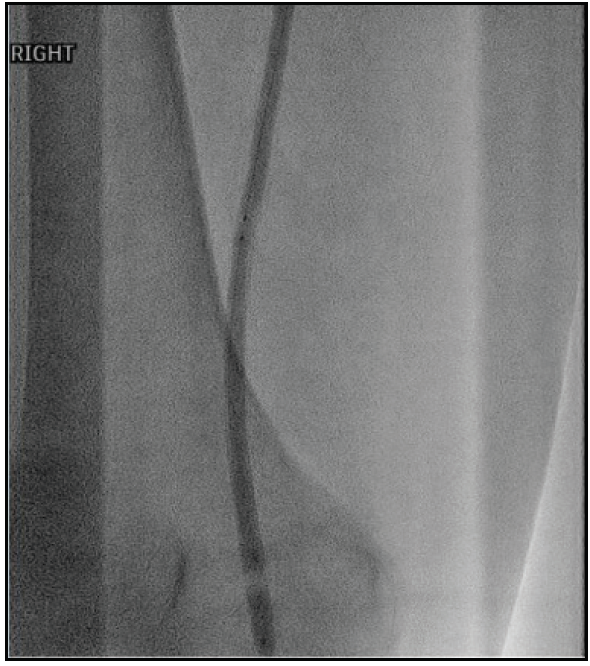 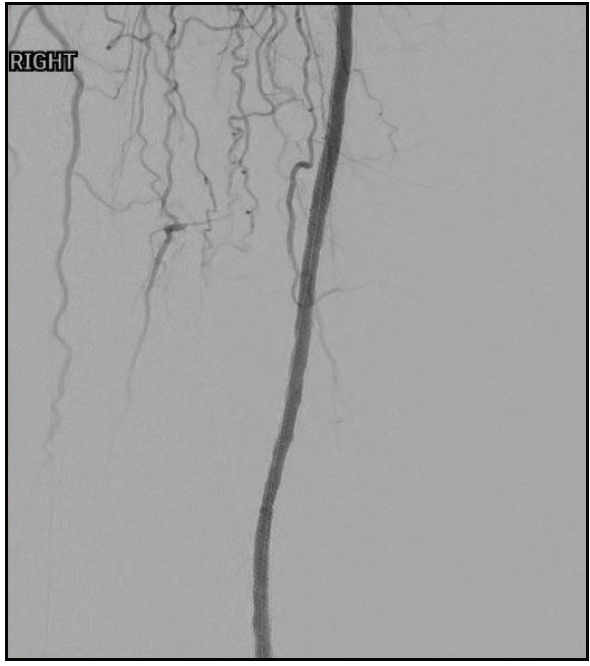 The Auryon atherectomy system appears to be a safe and effective treatment above and below the knee, including for critical limb ischemia. The 355-nm laser in conjunction with adjunctive treatment of highly calcified lesions significantly improves distal flow. Initial experiences in both cases demonstrated the device to be safe, with no dissections, perforations, or distal embolization. The device proved to be efficient and easy to use and showed excellent recanalization of severely calcified lesions. Postmarket data from the PATHFINDER I study and eventual PATHFINDER II study will further demonstrate the safety and efficacy of the Auryon device and its ability to treat all lesion types and calcifications above and below the knee.

Registry of AngioVac Procedures in Detail: The RAPID Registry