Clinical and preclinical data provide insight as to how mechanical forces impact outcomes.

The endovascular treatment of peripheral artery disease (PAD) in the superficial femoral artery (SFA) today offers several options that reflect astounding technologic advances and ingenuity. After plain balloon angioplasty came nitinol stents, stent grafts, drug-eluting stents, and more recently, drug-coated balloons, some in conjunction with various atherectomy devices. These devices have all been heralded at some point as safe, effective, and able to give better results compared with “previously published cohorts.” However, given this plethora of options, surprisingly little high-quality evidence is available as to which method is in fact superior to another and how exactly and in which lesions or patients this benefit can be obtained.

Nitinol stents have been advocated as the therapy of choice in intermediate or longer SFA lesions, especially after failed plain or drug-coated balloon angioplasty. Thus, regardless of whether a primary or provisional use of stents is preferred, the nitinol stent in the SFA will remain a part of every endovascular armamentarium for the foreseeable future.

However, every implanted self-expanding stent will exert a continuous force onto the surrounding vessel wall, termed chronic outward force (COF), for the remainder of its functional life. COF can be made higher by choosing a larger stent size for a given vessel size and by choosing a stiffer stent that exerts a higher expansive force when implanted in a vessel even slightly below the stent's nominal diameter. Although high COF was previously thought to be beneficial to overcome external compression and stent collapse, there is now anecdotal evidence that too much COF triggers inflammation and neointimal proliferation in the vessel, leading to early restenosis and occlusion. This evidence is available in animal studies as well as in clinical subgroup analyses from past randomized controlled trials.1-5

To assess the effect of COF in an animal experiment, nitinol stents were implanted in the peripheral arteries in porcine models.6 Either high-COF (LifeStent, BD Interventional) or low-COF stents (Astron® Pulsar®*, BIOTRONIK) were used. After 28 and 90 days, the treated arteries were histopathologically evaluated. In the high-COF group, neointimal area was significantly larger at both time points compared to the low-COF stent. Angiographic evaluation revealed a trend for lower lumen narrowing for the low-COF group at 28 and 90 days.

The aforementioned animal results have been partly confirmed in a retrospective analysis of patients who received de novo nitinol stent implantation and had an available follow-up CT 12 to 24 months after the index procedure (Funovics et al, unpublished data). A correlation between relative amount of stent oversizing and restenosis could be detected with a correlation coefficient (R2) of 0.216 for male patients and 0.329 for female patients (Figure 1). 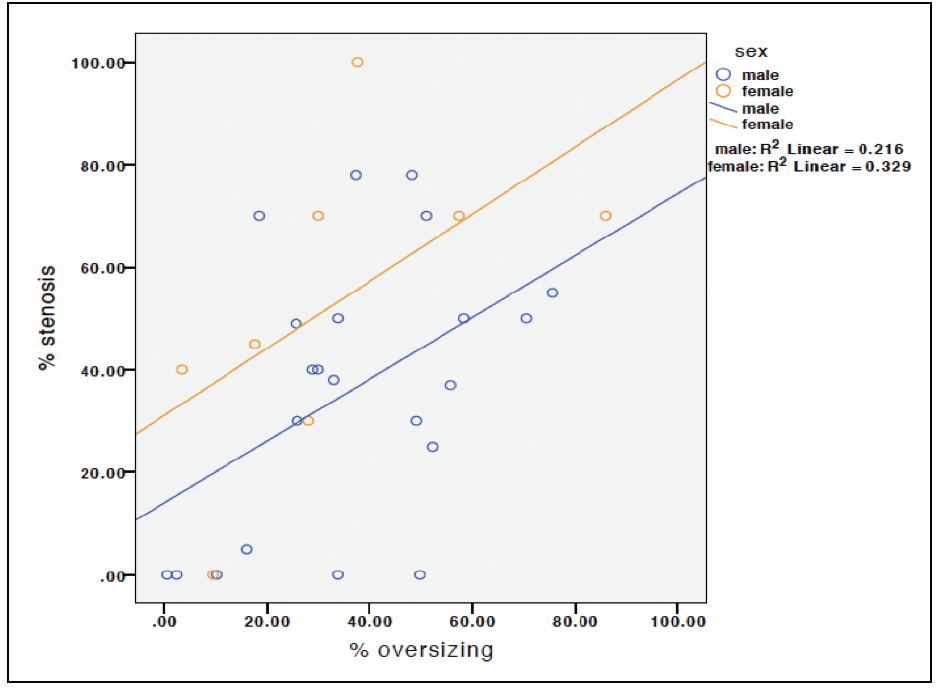 Figure 1. Correlation between stent oversizing and restenosis after 12 to 24 months in a retrospective data set of patients after de novo nitinol stent implantation in the SFA. The correlation coefficients for men (blue line) and women (brown line) are 0.216 and 0.329, respectively.

To further investigate the effect of COF on restenosis, the BIOFLEX-COF randomized controlled trial was designed to prospectively assess the influence of stent COF on patency at 1 and 2 years after implantation.

Patients with de novo SFA lesions were randomized in two groups. The high-COF group received a LifeStent stent with generous oversizing, while the low-COF group received a Pulsar®-18 stent (BIOTRONIK) with minimal oversizing. In the high-COF group, the stents are not only stiffer but also sized approximately 1-mm larger at a given vessel diameter (Table 1). This was done to create the highest difference in COF to feasibly test the force’s effect. The relation between COF and diameter of the stent is shown in Figure 2. 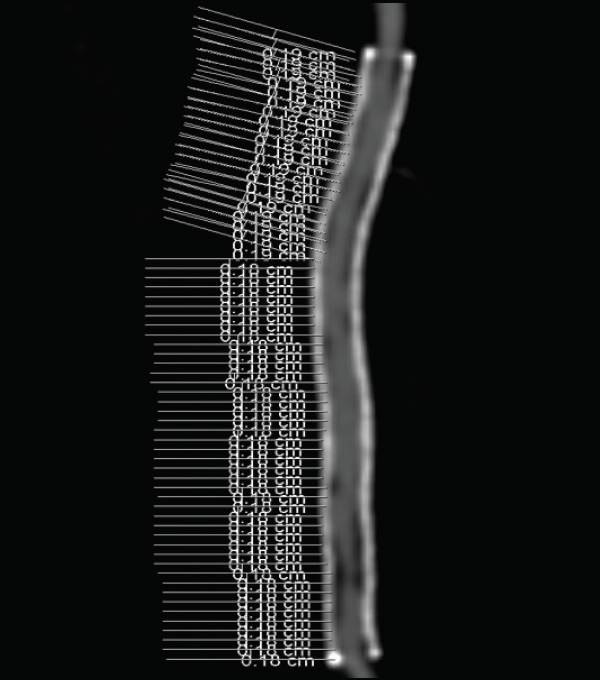 Figure 3. CTA (coronal reformation) of an implanted stent at 1-year follow-up. The bright white lines represent the stent surface, and the grey area inside the stent is the perfused lumen. Adjacent to the inner stent wall, there are black neointima formations that narrow the perfused lumen to a various extent.

The preliminary comparison of COF shows that the study could meet its technical goal in creating two groups of otherwise similar characteristics that differ markedly in the stent COF.7 While the high-COF group showed a median total COF of 55.69 N per patient, the low-COF group showed only 14.89 N, a 3.7-fold lower COF (P < .001). The preliminary results show lower restenosis in the low-COF group by a clinically relevant amount.

One-year results are expected to be published in the coming months, and we are confident that our approach to measure neointima on CTA will prove more sensitive in detecting early changes in lumen loss, even before clinical events are noted.

BIOFLEX-COF represents the first prospective randomized trial to assess COF of nitinol stents in the SFA, and we believe we will gain valuable insight as to which sizing and design can be recommended in the future of SFA stenting.

Astron, BIOTRONIK, Passeo, and Pulsar are trademarks or registered trademarks of the BIOTRONIK Group of Companies. All other trademarks are the property of their respective owners.

5. Dake M. Insights from Global Zilver PTX experience: what are the predictors for clinical failure and TLR? Presented at: LINC 2019; January 23, 2019; Leipzig, Germany.