Bare-metal stent (BMS) design and its clinical implications for treating infrainguinal peripheral artery disease have returned to the spotlight for a variety of reasons. One of the most notable is driven by the infamous Katsanos et al publication and the resulting questions surrounding paclitaxel-eluting devices.1 Several authorities, scientific organizations, and professional societies are still advocating the avoidance of paclitaxel, making nondrug-based treatments particularly valuable. Regardless, for all interventionalists—both paclitaxel believers and nonbelievers alike—there is still a strong need for modern-generation stents to perform well in increasingly demanding clinical scenarios. In extreme calcium, lesions in highly flexible areas such as the superficial femoral and popliteal arteries, chronic total occlusions, and common femoral artery disease, an especially complex demand is placed on a BMS’s mechanical performance. With renewed interest, the scientific community is looking to see if the clinical outcomes of these modern devices in these challenging scenarios are overruling the current gold standard.

THE EFFECTS OF STENT DESIGN PARAMETERS

The late complication of in-stent restenosis (ISR) is clearly the Achilles’ heel of BMSs, especially in difficult anatomic and pathologic areas. This late healing phenomenon leads to loss of patent vessel lumen and recurrence of claudication and chronic limb-threatening ischemia symptoms. Target lesion revascularization is a logical sequence in this setting.

Mechanical engineering is a science of compromise. Therefore, altering any single characteristic of a stent inevitably affects other properties. There is a very complex interaction between every feature of stent design and how the device behaves in clinical practice.3

One potential predictor of good stent performance is an ideal amount and balance of the three radial forces: chronic outward force (COF), the radial force that a self-expanding stent exerts at expansion on the vessel wall; radial resistive force (RRF), the force the stent resists under circumferential compression; and crush resistance (CR), the force the stent resists under focal compression.4-7 Influencing the programming of hysteresis curves of nitinol can influence the radial forces in one or another direction (Figure 1). Complex engineering techniques, such as programming the fully open stent diameter higher than the normal nominal diameter, can also manipulate the different radial forces of the device. 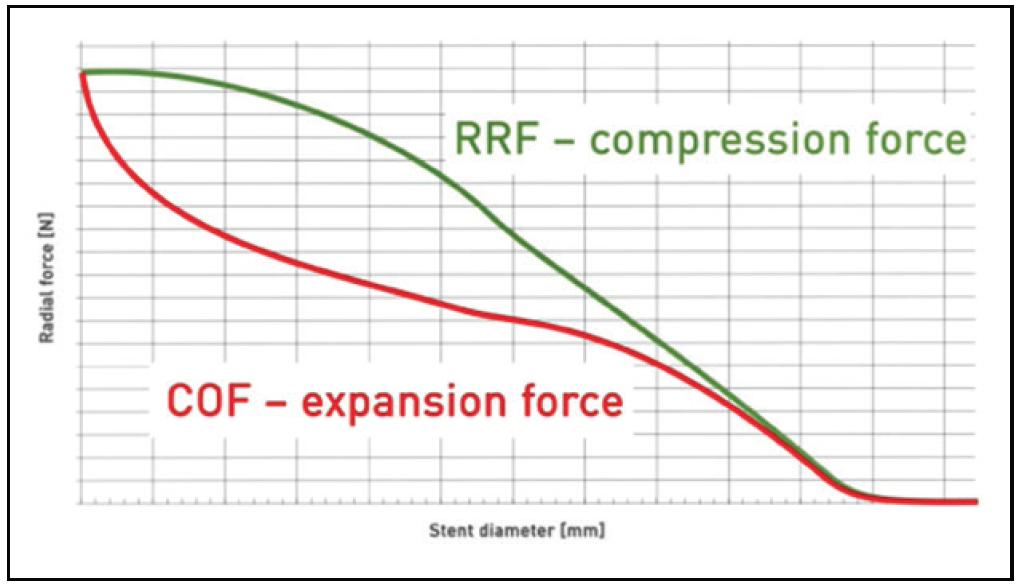 Figure 1. The programming of hysteresis curves can impact the expansion and compression forces of a stent.

Accomplishing the right amount of these forces is crucial. For example, on one hand, the COF needs to be high enough to restore the vessel lumen to near-normal diameter. On the other hand, too much COF (eg, from higher oversizing ratios) can cause a significant chronic increase in wall shear and structural stress to the arterial wall, inflammatory response, deep vascular injury with internal elastic lamina fracture, and finally, the development of myointimal hyperplasia. Animal studies have demonstrated the negative effect of too much COF on the occurrence of restenosis,5,6 which is also supported by clinical evidence.7,8 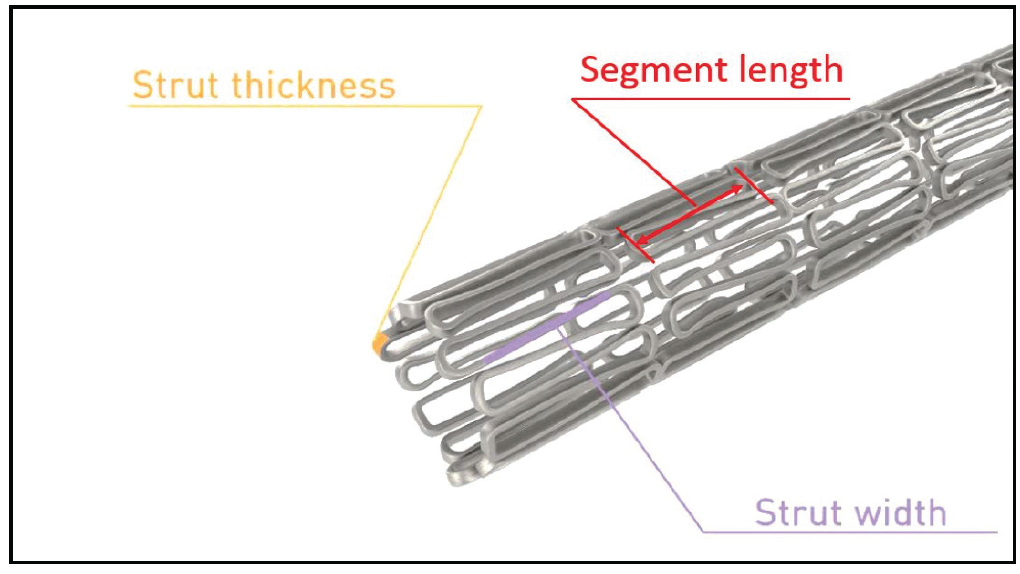 Figure 2. Strut thickness, segment length, and strut width are some of the most important influencers on COF.

If a stent is created with thin and small struts, such as the Pulsar®-18 T3* self-expanding stent (BIOTRONIK), the resulting COF will be sufficiently low. If the struts are large and thick, the stent will have extremely high COF. For example, the Pulsar-18 T3 stent with a 6-mm diameter has a strut thickness of 140 µm and creates a COF of 0.25 N/mm when it is 1-mm oversized.9 A 6-mm competitor stent with a strut thickness of 193 µm creates a COF of 0.57 N/mm when 1-mm oversized (Figure 3).9 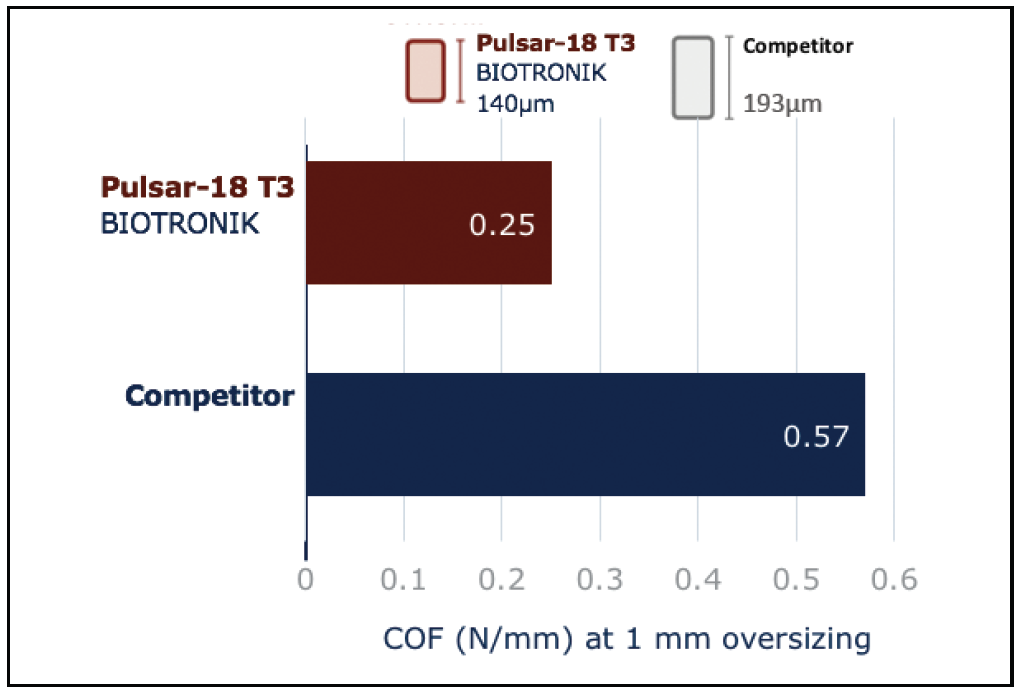 When struts are too thin and small, the RRF and CR will decrease tremendously and will be insufficient to prevent recoil and collapsing. If the struts are large and thick, the stent will be highly recoil resistant (circular or eccentric) but unfortunately will have extremely high COF, which can result in damage of the intima, inflammation, and neointimal hyperplasia.5-8

Strut thickness also plays a role in the development of the inflammatory response and injury to the internal elastic lamina: the thinner the struts, the less they induct trauma and inflammation.10 Deep trauma in vessels with high plaque burden results in myointimal hyperplasia and earlier restenosis. Thinner struts provide greater stent flexibility, avoiding bigger flow disturbances and areas of high shear stress, while allowing for faster endothelialization.9† 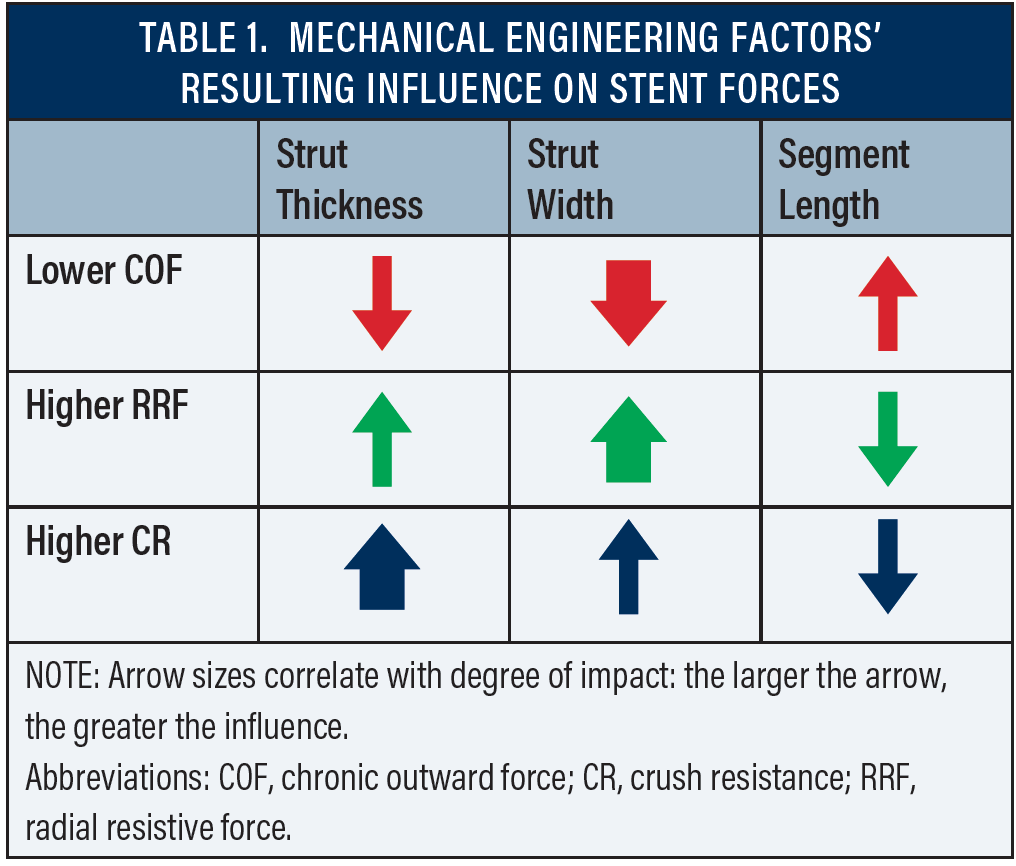 Beyond the stent itself, the delivery system’s profile will also have potential clinical impact. As was demonstrated by the 4EVER trial, a 4-F approach, as is possible with the low-profile Pulsar-18 T3 system, provides the potential for safer, faster, and simpler procedures compared to a 6-F approach, with lower access site complication rates and shorter compression time.11 When comparing the puncture site size, a 4-F intervention will result in a 45% smaller puncture site when compared to that with 6-F sheaths (Figure 4). The mean compression time with a 4-F puncture of 8 minutes is about half the time needed after a 6-F intervention.12

Figure 4. A 4-F intervention will result in a 45% smaller puncture size compared to 6-F devices.

As more lower limb interventions move to the outpatient setting, data support the use of 4-F devices to deliver an equivalent safety profile to that of the established 6-F devices, while eliminating the need for a vascular closure device.13

It is essential that endovascular specialists are intimately familiar with the stents’ properties and corresponding pros and cons in order to select the correct one for the appropriate clinical situation. Understanding the biomechanical differences between stents is becoming more important as lesion complexity increases. Selecting the right device is the key to achieving a good clinical outcome for the patient. At the same time, it is essential to compare apples with apples and randomize the best of classes to each other in well-designed head-to-head trials.

The evolution of stents’ role in endovascular treatment of peripheral artery disease has resulted in a significant change in stent designs. Stent design is crucial for acute and long-term outcomes of our patients. Well-designed stent systems like the Pulsar-18 T3 stent, with minimal metal burden, low-profile sheath compatibility, and an appropriate balance of radial forces, will continue to demonstrate high primary patency rates and event-free follow-up consistent with the device’s extensive clinical program in more than 1,000 patients.7,8,11-22‡

Astron, BIOTRONIK, Passeo, and Pulsar are trademarks or registered trademarks of the BIOTRONIK Group of Companies. All other trademarks are the property of their respective owners.

3. Finet G, Rioufol G. Coronary stent longitudinal deformation by compression: is this a new global stent failure, a specific failure of a particular stent design or simply an angiographic detection of an exceptional PCI complication? EuroIntervention. 2012;8:177-181.

*Also applicable to Pulsar-18, the predecessor of Pulsar-18 T3 that uses the same stent.