Highlighting the evolution of repair of aberrant subclavian artery and symptomatic Kommerell diverticulum with aneurysmal degeneration, from open repair to a hybrid approach to the future of total endovascular repair.

The right subclavian artery is embryologically derived from the right fourth branchial arch, which is a portion of the right dorsal aorta, and the right seventh intersegmental artery. An aberrant subclavian artery, also known as the arteria lusoria, is an embryologic anomaly that occurs when the fourth right aortic arch and distal aorta involute and the seventh right inner segmental artery remains, resulting in a subclavian artery arising from the descending thoracic aorta distal to the left subclavian artery (LSA).1 It is the most common congenital anomaly of the aortic arch. A remnant of the residual dorsal arch known as Kommerell diverticulum (KD) is present in about 60% of patients with aberrant subclavian arteries.2 Patients with aneurysmal degeneration related to KD may present with symptoms such as dysphagia, dyspnea, and arm claudication and can sometimes present with aortic dissection, superior vena cava syndrome, free rupture, or perforation into the esophagus.3 Multiple factors are considered when planning a surgical intervention, including physiologic criteria (eg, overall patient risk status) and anatomic criteria (eg, aneurysm size and course of the artery).

The first account of surgical treatment for dysphagia lusoria was reported in 1946 by Robert Gross.4 In 1985, Austin and Wolfe provided the first comprehensive review of a surgical approach to treat aberrant aneurysmal subclavian arteries.5 Since then, surgical repair of KD and the associated aneurysmal degeneration has evolved to include open, hybrid, and, most recently, total endovascular surgical techniques.

Historically, surgical management of an aberrant subclavian artery consisted simply of ligating the aberrant vessel, but this resulted in extremity ischemia and reversal of blood flow through the vertebral artery.6 Subsequent reports of surgical repair by Kieffer et al described a posterior lateral thoracotomy to ligate the aberrant subclavian artery at its origin, followed by a median sternotomy whereby the aneurysm is dissected off the esophagus or trachea, excised, and a Dacron interposition graft is placed for revascularization of the right subclavian artery.7 In patients with KD, the inflow was taken directly from the aorta itself, incurring the inherent risks of clamping the aorta (Figure 1). Additionally, this two-incision, often staged technique requires deep hypothermic circulatory arrest and/or cardiopulmonary bypass or left heart bypass with an aorta–left femoral artery shunt to bypass the diverticulum before repair. Over time, this was modified to a combination of either median sternotomy or thoracotomy and a separate supraclavicular incision for revascularization of the LSA and preservation of the vertebral artery.6,7 In these early series, patients with rupture at the time of presentation had a mortality rate of 100%. Overall mortality reported in the literature was up to 24%; however, those results have improved dramatically over time with much lower mortality rates. Morbidity rates remain at approximately 25%, including recurrent laryngeal or phrenic nerve injury, chylothorax, stroke, or cardiopulmonary complications.7-11 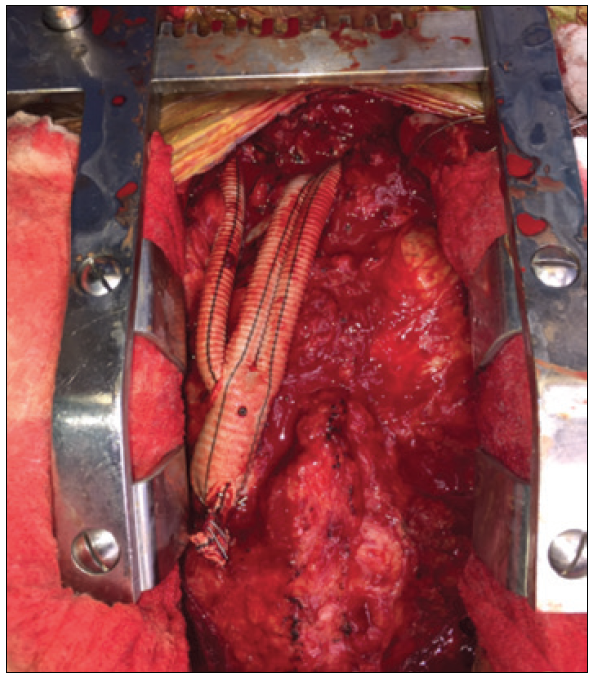 The need for less invasive interventions and the arrival of the endovascular era have led to a transformation of the surgical approach while still accomplishing the goals of repair. Because of its commercialization in 2005, the use of stent grafts for thoracic endovascular aortic repair (TEVAR) has evolved from aneurysms or dissections to more complex aortic pathologies such as coarctation, aortic transections, and KD with or without aneurysmal degeneration. It is not hard to argue that this technology has opened doors for surgical repair in patients who otherwise would face the prohibitive risk of morbidity with purely open techniques.

Symptomatic KD and those with aneurysmal degeneration are no exception. A hybrid approach using TEVAR in conjunction with carotid subclavian artery bypass has revolutionized the repair of this pathology. The hybrid approach is often performed in two stages, whereby a carotid-subclavian bypass is performed via a supraclavicular approach, followed by a thoracic stent graft placement via a percutaneous femoral approach.12 Sizing for an appropriate endograft is a critical component of surgical planning with this approach. A CTA with thin 1- to 2-mm slices is a prerequisite to obtaining precise anatomic information pertaining to the cerebrovascular vessels and their relationship with KD or aneurysm (Figure 2). The surgeon must be competent with software that can create a centerline of flow (eg, TeraRecon, TeraRecon, Inc.) to optimize the measurement of the proximal landing zone, which is the actual seal zone (Figure 3). Instructions for use must be followed for whichever device is selected to avoid a type Ia endoleak; for most devices, the recommendation is 2 cm of proximal seal zone. 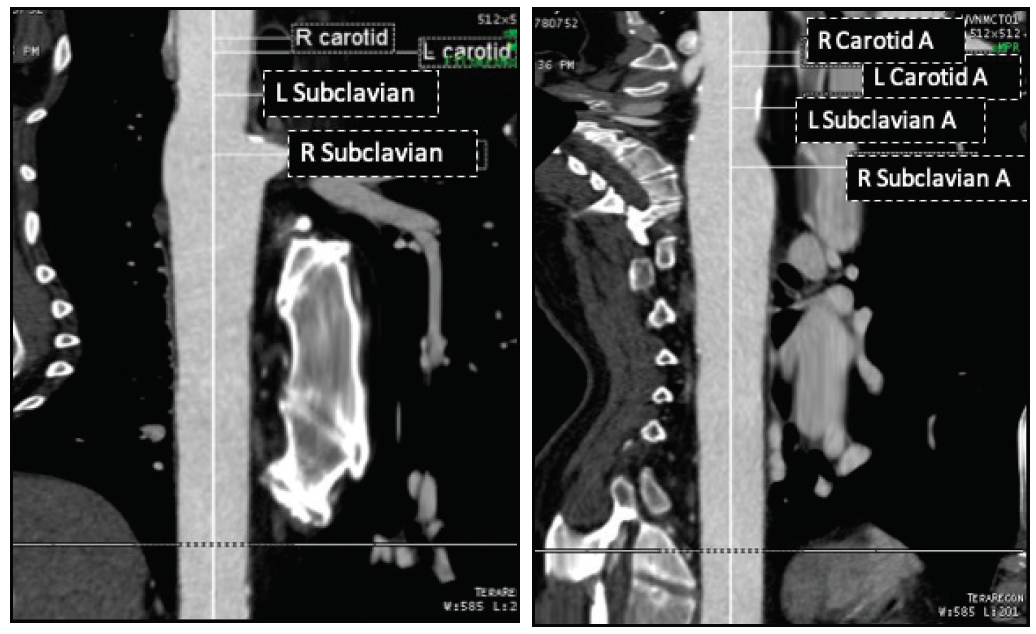 Figure 3. Creation of centerline of flow to obtain precise measurements for landing zone and distances between each visceral vessel.

Often, the distance between the LSA and the more distal anomalous right subclavian artery is insufficient to serve as an adequate proximal landing seal zone and may require bilateral carotid subclavian artery bypasses with placement of the TEVAR device to the distal edge of the left common carotid artery to gain adequate seal zone length (Figure 4). On a technical note, the operator needs to remember that the fluoroscopic obliquities required may be more acute than conventional TEVAR for descending thoracic aortic aneurysms. In patients with a right-sided aortic arch, it is not uncommon to need steep 80° to 90° right anterior oblique projections to adequately visualize the origin of cerebrovascular branches to facilitate accurate deployment. Alternatively, a bump may be used to create a slight left lateral position of the torso to reduce the steep angulation of the image intensifier for ergonomic feasibility. An intraoperative ultrasound may be used as an adjunct to assist in accurate identification of the arch vessels and precise deployment. Once TEVAR is completed, plugs or coils are used to embolize the LSA at its origin and the right aberrant/aneurysmal subclavian artery distal to its anomalous retroesophageal course but proximal to the origin of the vertebral artery in the healthy-appearing, normal-caliber segment to avoid the risk of coil/plug erosion into the esophagus, while maintaining perfusion to the vertebral artery (Figure 5). 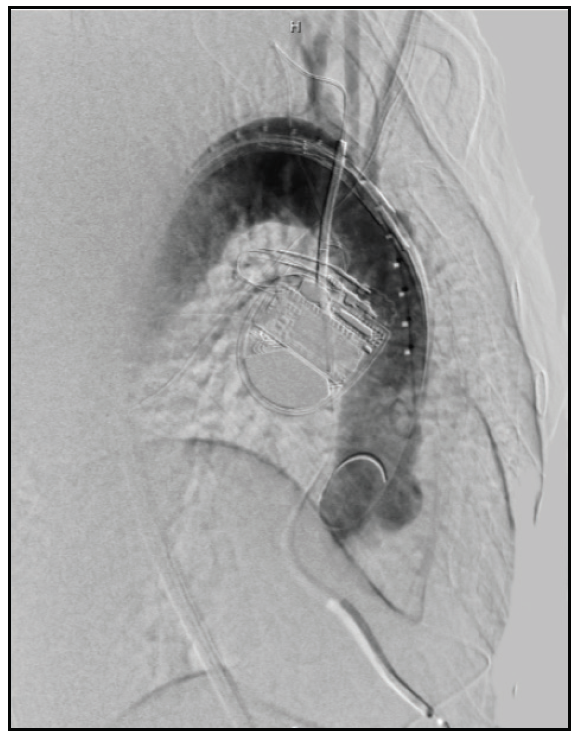 Figure 4. An intraoperative fluoroscopic demonstration of stent graft placement during TEVAR to the distal edge of the left common carotid artery in an extreme right anterior oblique angle at 80°. 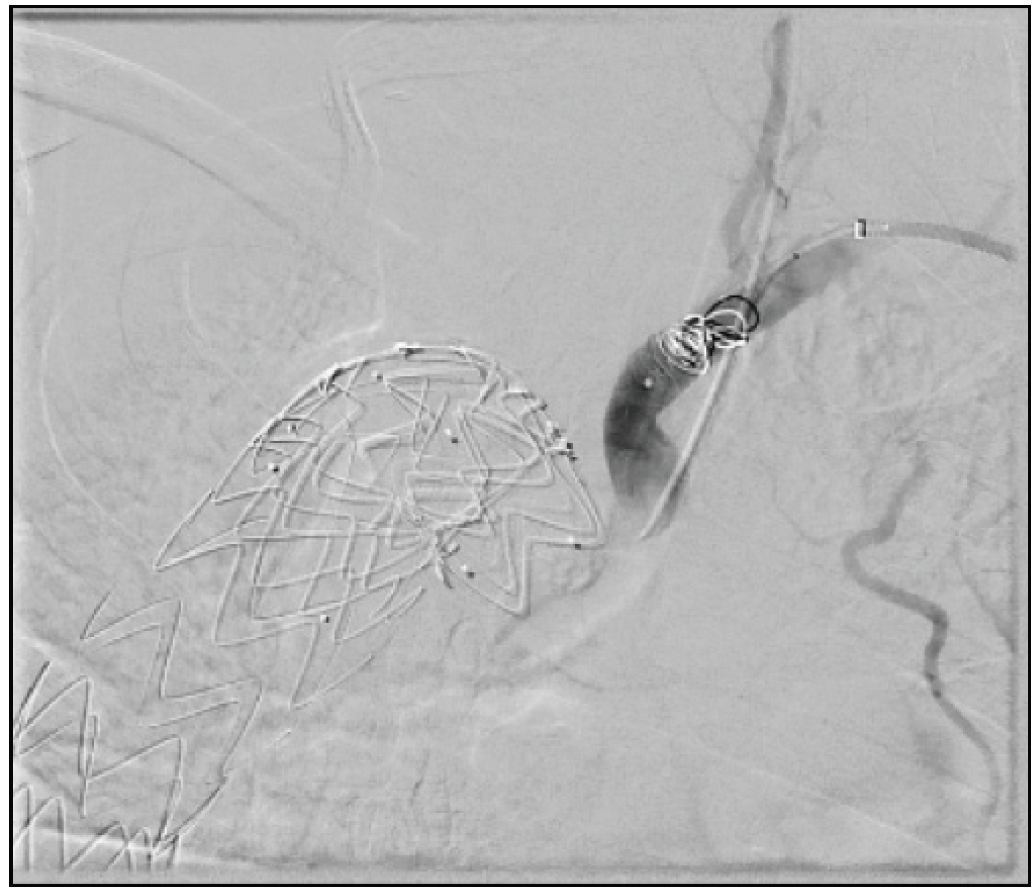 Figure 5. Amplatzer plug (Abbott) placement in the aberrant right subclavian artery distal to the KD and its retroesophageal course but proximal to the vertebral artery; right anterior oblique angle at 10°.

Occasionally, a patient may have arch vessels in very close proximity that preclude the use of an endovascular graft without extensive cervical debranching of all the arch vessels. In such patients, debranching of the supra-aortic vessels via a median sternotomy may be performed with or without frozen elephant trunks, followed by exclusion of the KD by performing TEVAR via a femoral approach.13,14 With the advent of dual arch branched grafts, there have been reports of hybrid endovascular repair incorporating bilateral carotid-subclavian bypasses and dual arch branched endograft placement to the left and right common carotid arteries for the repair of these anatomically challenging arches with KD and aneurysmal degeneration.15

Contemporary reports of the hybrid technique have shown symptomatic relief in the majority of patients, even though the aneurysm was not excised; this can likely be attributed to sac depressurization from excluding inflow and outflow from the aneurysm. These reports have shown a very low incidence of stroke or spinal cord ischemia and carry benefits inherent to the endovascular approach of quicker recovery and shorter intensive care unit and hospital stays.16-18 A recent unpublished retrospective analysis by the author has shown a higher rate of endoleaks; however, these were easily remediated with minimally invasive percutaneous reintervention.

Clinical trials are underway investigating the role of arch branched grafts in the treatment of aortic pathologies involving the cerebrovascular vessels.19,20 Once commercially available, the arch branched devices may be used to perform an endovascular exclusion of the KD while maintaining perfusion to the aberrant subclavian artery via a branched stent graft, without the need for a surgical bypass.

Although the open technique still has an important role to play in specific patients based on their anatomy and comorbidities, treatment of aneurysmal degeneration of aberrant subclavian arteries and KD has seen a paradigm shift as experience with endovascular interventions has increased. The less invasive hybrid approach seems to offer minimal risk for mortality and morbidity and therefore may be offered to patients who otherwise would be excluded from treatment given their higher-risk profile. Although the hybrid approach may still face the same challenges of higher rates of reintervention for endoleaks as seen in endovascular interventions performed for other aortic pathologies, it remains lucrative compared with open techniques that are limited by the upfront morbidity. As these technologies continue to advance, we are likely to soon see more widespread adoption of the endovascular approach with arch branched graft technology.

Strategies for Stroke Prevention During TEVAR: From Embolic Protection to Device Preparation and Delivery