Procedural tips, data from a decade of clinical use, and future directions for the technology.

Wide-necked aneurysms remain a challenge for endovascular therapy, even as coil and coil-assist technologies have advanced. Flow disruptors are a novel category of intrasaccular aneurysm devices that combine the properties of flow diversion and coiling to permanently occlude aneurysms and limit the need for dual antiplatelet therapy. Nearly a decade of clinical use—beginning with the Woven EndoBridge (WEB) system (MicroVention Terumo) and Artisse (formerly called Luna; Medtronic), which received CE Mark approval in Europe in 2010—has resulted in approximately 11,000 patients treated worldwide. The successful launch and adoption of these new devices were predicated on technologic innovation, high-quality clinical trials, and the United States clinical introduction of the WEB device, with a commitment to training, proper case selection, and proctoring to ensure appropriate device use. As with most devices in the neurovascular space, the next generation of intrasaccular flow disruptors will seek to build and improve on the current generation of devices in terms of cost, ease of use, indications, safety, and efficacy.

Device Construction and Procedural Use

To build a WEB device, a braiding machine uses platinum-core nitinol wires to create stents of varying diameters that can then be cut, heat shaped over molds of different heights, and crimped at the ends to create a metal mesh sphere that is then attached to a flexible wire delivery system. The WEB device initially used bare nitinol wires and was designed as a dual-layer device with one smaller metal mesh sphere nested inside a larger device. Successive iterations have seen that design changed to a single-layer device with construct wires that contain a radiopaque platinum core for better visualization. The device is delivered through 0.017- (available outside the United States), 0.021-, 0.027-, and 0.033-inch VIA microcatheters (MicroVention Terumo). The device is retrievable via the delivery wire before detachment, and the purpose-built VIA catheter is stiff enough to resist the forces needed to collapse the device back into the catheter if size or position needs to be changed.

Correctly sizing the device is the key to immediate technical success and occlusion of the aneurysm, as well as long-term durability of the treatment. The strategy is to oversize the device’s width compared with the aneurysm and undersize the height. The goal is to volumetrically fill as much of the aneurysm as possible, as lateral compression grows the height of the device when deployed in the aneurysm. When compressed, the device becomes compaction resistant.

In the United States, the WEB catalog consists of single-layer devices (WEB SL) ranging from 4 X 3 mm to 11 X 9 mm and a total of 25 different diameter-height combinations. Following the concept of lateral compression, the appropriate-sized aneurysms for treatment may range from 3 to 10 mm in width. The spherical device (WEB SLS) comes in diameters of 4 to 11 mm, and the height is 1.4 mm smaller than the device diameter. These are mostly used for tall aneurysms with narrow necks. Outside of the United States, the 0.017-inch system has an expanded catalog of half-mm width intermediates and a 2-mm height. An amendment to the original FDA submission to include the 0.017-inch system in the United States is pending.

When correctly sized, several positioning strategies can be employed to ensure suitable neck coverage. The first half to two-thirds of the device exits the microcatheter in a stiff configuration, making shallower aneurysms more difficult and riskier to treat. After this point in delivery, the distal portion of the WEB opens and becomes compliant enough to push against the aneurysm dome. When seated within the fundus of the aneurysm, final delivery can occur by either pushing wire or unsheathing the catheter, similar to most intracranial stents. Positioning at the aneurysm neck is the goal. If a portion of the device extends into the branch vessels, angioplasty alone is unlikely to correct it. In most instances, a stent can easily compress the soft corners of the device.

Durable treatment is achieved when endothelialization occurs across the orifice of the aneurysm. This process is facilitated by uniform convergence of the metal strands at the proximal device marker and a stable position of the device across the neck. A new scale was created to grade aneurysm occlusion. The WEB Occlusion Scale considers complete treatment to be no remnant or recess filling (Figure 1); a small neck remnant is considered adequate treatment across most studies. Contrast filling around the WEB to the aneurysm dome is considered an incomplete treatment or failure. 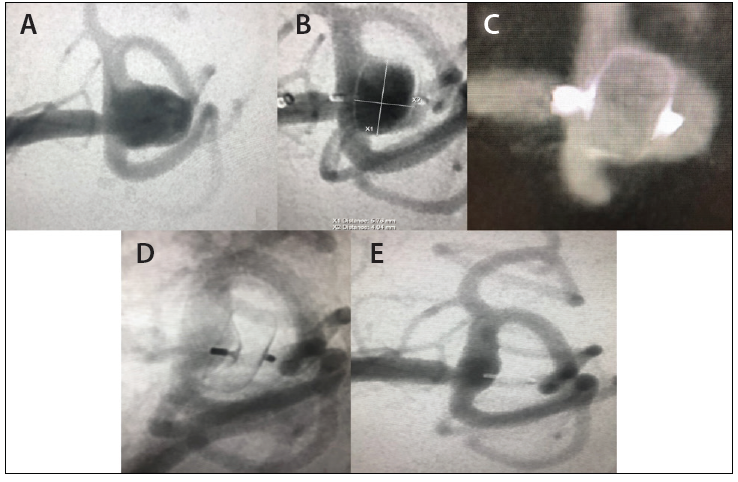 Figure 1. An unruptured 6- X 5-mm aneurysm (A). A 7- X 3-mm WEB device is deployed in a 15-minute procedure, including DynaCT (Siemens Healthineers). The device is compressed laterally to 5.7 X 4 mm (B). Using DynaCT, impingement on the branch anatomy is evaluated (C); on postoperative day 1, the patient is discharged home on aspirin only. At 6-month follow-up, thrombosis in the aneurysm has occurred and scar formation has collapsed the dimensions of the WEB (D). Contrast filling is seen in the proximal recess only (E). This is a WEB Occlusion Scale 2 result (ie, complete treatment) and is expected to be durable based on long-term follow-up data.

Early case reports and animal data were published on the positive experience with WEB and Artisse.1,2 With the development of this promising technology, high-quality clinical trials became necessary to validate its use. Sequent Medical (and subsequently MicroVention Terumo) invested heavily in good clinical practice (GCP) and premarket approval (PMA) trials to evaluate the safety and efficacy of the WEB devices’ intrasaccular flow disruption. Internationally, WEBCAST, WEBCAST II, and French observatory GCP trials were the first to enroll patients and adjudicate technical success, safety, and long-term occlusion.3-6 These were followed by CLARYS for ruptured aneurysms (NCT02687607), WEB-IT for ruptured and unruptured aneurysms (FDA PMA; NCT02191618), WEB-IT China (NCT03207087), and the CLEVER trial for the 0.017-inch WEB system (NCT03844334) for a total of nearly 600 patients with ongoing long-term follow-up.

The United States WEB-IT trial enrolled 150 patients at 27 centers.7 Enrollment went faster than expected and occurred from August 2014 to March 2016. A small number of centers outside the United States with previous WEB experience was included in the trial, but most centers began enrollment with no roll-in cases. To this end, an investment was made in patient-specific anatomic modeling for surgical case simulation on three-dimensional printed models, including the Neurovascular Replicator, (Vascular Simulations, Inc). The first several cases for each investigator were replicated and performed in a circulating fluid model.

Many factors affect the success of intrasaccular flow disruption in clinical practice, including patient selection, angiography performance, device selection, catheter positioning, detachment strategies, and complication management. The simulated models were particularly useful for sizing, catheter positioning, and deployment practice. Despite the lack of experience with the device, the overall performance, safety, and efficacy results in the WEB-IT trial were similar to the results of the previous French studies.

In WEB-IT, the device was successfully placed in 148 of 150 patients. There was a low rate of adjunctive device use—balloons were used to facilitate placement in five patients, and stenting was only required in two patients to maintain parent vessel patency. The overall safety profile was remarkable, with only one major stroke event within 30 days and no neurologic deaths at 1-year follow-up. The WEB-IT efficacy results were also in line with the combined French data, with an 84.6% versus 79.3% rate of adequate occlusion (WEB Occlusion Scale 1–3). At 1 year, 5.6% underwent retreatment, most accomplished using stent-assisted coiling.5,7

The results of the WEB-IT trial, along with data gathered through European studies and other clinical experience, led to FDA PMA approval in January 2019 of the 0.021-, 0.027-, and 0.033-inch systems for treatment of 3- to 10-mm wide-necked bifurcation aneurysms at the middle cerebral artery bifurcation, anterior communicating artery, internal carotid artery terminus, and basilar artery apex. As a novel device for the treatment of aneurysms, the FDA mandated an initial training, case approval, and proctoring process to help new users gain familiarity with the procedure.

The current training for new WEB users consists of a didactic review of the literature and procedural details, including sizing strategies (Figure 2). Most new user training is conducted with the assistance of high-volume proceduralists who can describe their use of the WEB in clinical practice and for what types of aneurysms it may and may not be effective. It is not possible to replicate every new aneurysm, but a standard library of Vascular Simulations’ Neurovascular Replicator models has been developed to practice deployment and cover a spectrum of easy and difficult cases. For most users with an interventional practice, this is sufficient to familiarize themselves with the stiffness and mechanics of deploying the WEB. 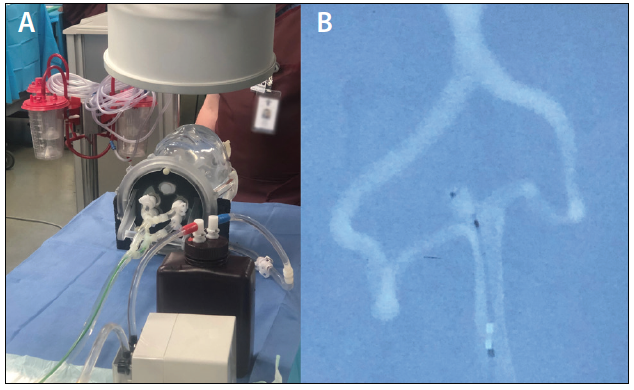 Figure 2. A circulating fluid model is used for surgical simulation and WEB training for new users (A). The small replicated basilar aneurysm is used to show different deployment strategies and demonstrate the importance of correct sizing and catheter positioning for the treatment of shallow aneurysms (B).

In 2019 in the United States, more than 500 interventionalists at more than 300 centers have been trained to use the WEB. Physicians are initially asked to upload deidentified cases into a portal, where they are judged by a panel of industry and physician experts for technical difficulty and meeting labeled indications. Provisions are made for commentary on access, sizing, and other complicating factors. When approved, a mandatory experienced proctor is provided for the first three cases and is then available on request by the physician. In the year since approval, > 1,400 cases have been evaluated through the portal with > 1,100 cases completed (MicroVention Terumo, oral communication).

Future directions for intrasaccular flow disruption will be based on the refinement of currently available technology, adoption by new users in the United States and throughout the world, and the production of new and currently unavailable devices. Although the WEB device is currently the only intrasaccular flow disruptor approved for use in the United States, the Contour device (Cerus Endovascular Ltd.) and new technology from Stryker and Medtronic are in preclinical and clinical evaluation.

There is also a favorable large European experience studying aneurysms at locations other than the indicated bifurcations, and there will likely be expanded use of devices in the posterior communicating artery, ophthalmic artery, posterior inferior cerebellar artery, and distal anterior cerebral artery locations when technology and aneurysm morphology permit. Recurrent aneurysms after coiling and partially thrombosed large and giant aneurysms are also target lesions where intrasaccular flow disruption has been incompletely evaluated. Investigator-initiated and industry-sponsored studies will remain an important part of the process for understanding whether the new devices are as safe and effective as currently available devices and whether these other locations and subtypes of aneurysms can be safely and completely treated.

With a decade of clinical use and high-quality safety and efficacy data, intrasaccular flow diversion is no longer a novel strategy. Increased adoption, indications, and the number of available devices will change the approach to most intracranial aneurysms. The individual and global case volumes for coiling, coil-assist with stents or flow diversion, and surgical clipping will be affected. These trends bear watching by physicians and industry because they will shape practices, new interventionalist training, and the direction of future device development efforts.