A 61-year-old man presented with a 15-year history of urinary symptoms secondary to benign prostatic hyperplasia (BPH). He had a known prostate size of 70 g (normal, 20–30 g), and his chief complaint was hesitancy and intermittency of urination. Initially, he was treated with medications for his symptoms (tamsulosin and finasteride), but treatment was discontinued due to sexual side effects. After failure to improve using herbal/holistic supplements to relieve his symptoms, he found his symptoms were having a significant negative effect on his quality of life (QOL). However, he was wary of pursuing a surgical solution such as transurethral resection of the prostate, because of the potential side effects associated with the procedure. Instead, he decided to undergo prostate artery embolization (PAE).

The patient underwent PAE from a femoral artery approach (as he was too tall for a radial artery approach). To begin, a 5-Fr catheter was placed into his left internal iliac artery, and angiography demonstrated that his prostatic artery arose from the internal pudendal artery. (Note: the patient also had a history of bilateral hip arthroplasty, as is evident on the images.) Prior to embolization, an arterial anastomosis to the rectum was coil-embolized with a 3/2-mm Tornado® Embolization Coil (Cook Medical). Additionally, an arterial anastomosis to the internal pudendal artery was embolized with a similar coil.

At that point, a 2.4-Fr SeQure® microcatheter (Guerbet) was inserted into the left prostatic artery, and the left hemi-prostate was embolized with 250 µm Embozene™ Microspheres (Boston Scientific Corporation) until flow was sluggish, at which point, embolization was completed with a gelfoam slurry. When using the SeQure® catheter, the embolic solution can become more concentrated as the fluid component exits the holes within the distal catheter; therefore, we recommend the initial solution be adequately diluted to prevent aggregation and occlusion of the catheter. A Waltman loop maneuver was then used to select the right internal iliac artery with the 5-Fr catheter. Angiography was again performed, demonstrating the right prostatic artery arising from a vesicoprostatic trunk. The SeQure® microcatheter was then reinserted, and more selective angiography demonstrated the right hemi-prostatic blush (Figure 1). Embolization was performed with 250-µm particles. When flow was once again sluggish, embolization was completed with the gelfoam slurry. 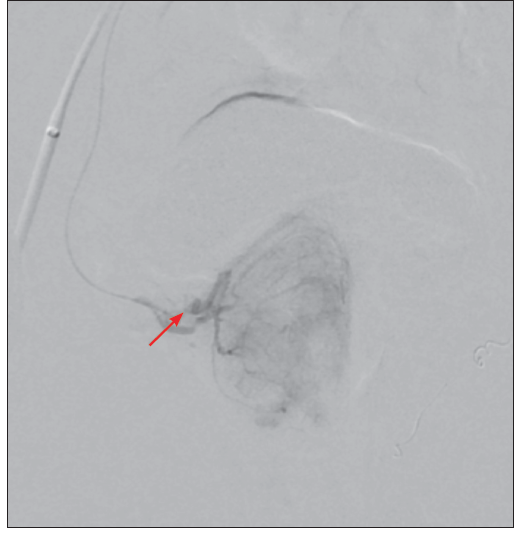 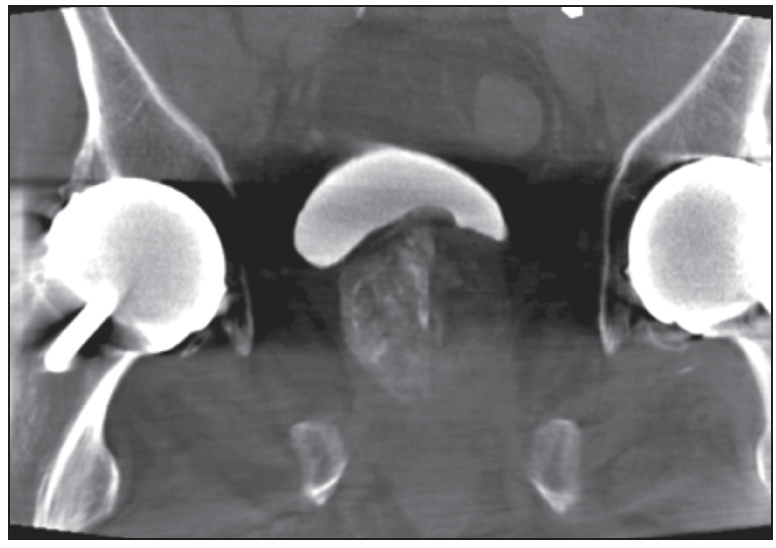 Figure 2. Coronal image from a noncontrast cone-beam CT after embolization, demonstrating retained contrast throughout the prostate. The increased density seen in the right hemi-prostate is due to the fact that it was embolized after the left and, therefore, less of the contrast had been resorbed.

The SeQure® catheter was designed to reduce premature embolic reflux during embolization procedures. In this case, after initial embolization, contrast was observed exiting through the side hole at the distal segment of the catheter, creating the protective pressure gradient and preventing reflux (Figure 3). This potentially results in more particles being injected into the prostate compared to a standard end-hole catheter. The final cone-beam CT images suggest that this catheter is capable of thorough embolization of the prostate. 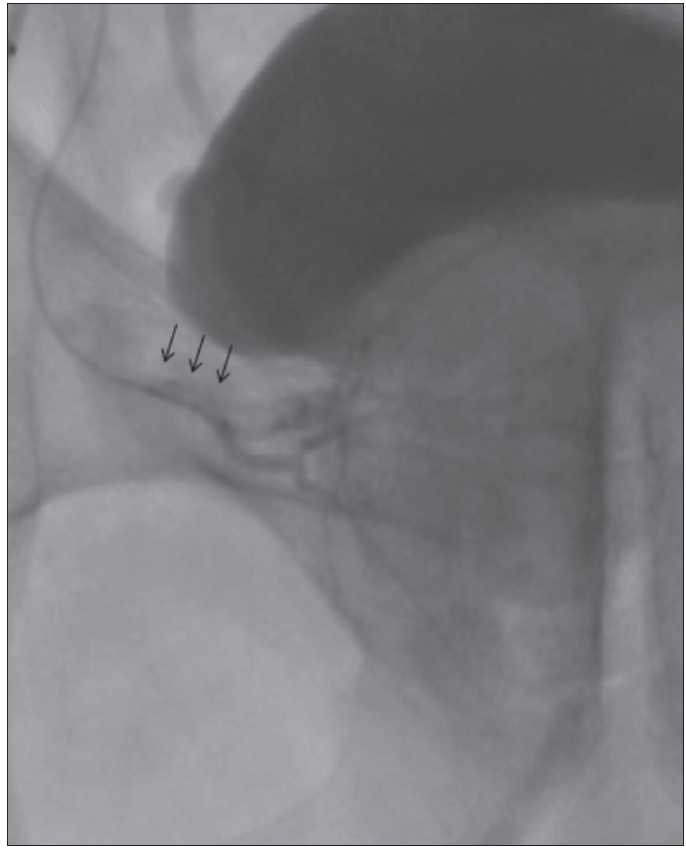 Figure 3. Fluoroscopic image demonstrating embolization of the right hemi-prostate. Contrast can be seen exiting the holes in the distal segment of the microcatheter forming the anti-reflux pressure gradient (arrows).

Importantly, the patient was evaluated before and after the procedure for symptom severity using the International Prostate Symptom Score (IPSS) questionnaire, an 8-question tool used to screen for, diagnose, and track symptoms of BPH. The IPSS has seven questions related to symptoms and one related to QOL. In this case, the patient’s baseline IPSS was 25 (on a scale of 1 to 35; 25 is severely symptomatic) and his QOL was 4 (on a scale of 0 to 6; 4 is mostly dissatisfied). Three months postprocedure, his IPSS score was 10 (low-to-moderately severe) and his QOL score was 1 (pleased), indicating that PAE performed with a SeQure® catheter successfully alleviated this patient’s symptoms.

PAE performed with a SeQure® catheter is an emerging interventional technique that can be used successfully to manage patients with urinary tract symptoms secondary to BPH.

*The SeQure® microcatheter is not recommended for use with gelfoam.

Reprinted with permission from Applied Radiology Vol. 48, No. 4.

Ask the Experts: Which Device Combinations Work Best in Your Hands for Parallel Grafting and Why?