Steps to treating patients with critical limb ischemia in a day-case system, from the preprocedural visit to postprocedural care.

In most health care systems, hospitals are currently running at maximum capacity and bed space is at a premium.1 To reduce costs and facilitate more efficient use of hospital beds, ambulatory treatment has been advocated as a solution in many medical fields. The first reports on outpatient treatment in the endovascular domain date back to the 1980s. Under the condition that surgical assistance is readily available, “any patient whose medical condition and overall health are such that he or she does not require the level of nursing or medical care found in an acute care hospital is a candidate for outpatient angiography or angioplasty.”2,3 This article focuses on the treatment of critical limb ischemia (CLI) patients in a system that favors day-case treatment.

To perform interventions on an outpatient basis, the procedure needs to be performed with a low complication rate, thus reducing the percentage of conversion to a hospital-based, inpatient procedure. The incidence of minor and major complications after peripheral endovascular interventions ranges from 4% to 8%, and most of the complications are related to the access site. The risk of complications in patients with peripheral artery disease is considered higher than in cardiac catheterization patients because patients with peripheral artery disease are generally older. Known predictors of access site complications are older age, female sex, increased weight, higher systolic blood pressure, use of heparin pre- and postprocedure, and sheath size. These factors need to be taken into account when selecting candidates for outpatient treatment.4,5 Other prerequisites for suitability are intact mental status, availability of adequate support (an ambulant adult should be present for the 24 hours after the procedure), the patient or accompanying person’s ability to ambulate and recognize complications, and access to communication systems (telephone) and a nearby hospital (< 1 hour away). Contrast tolerance should also be established, and serum creatinine and international normalized ratio should be within the normal range.6,7 Relative contraindications for ambulatory treatment are poorly controlled hypertension and/or diabetes.7 The institution should have well-established protocols for preinterventional evaluation (see Proposed Workflow for CLI Patients sidebar) and postinterventional care, and a facility that can offer emergency surgery.8,9

After the procedure, hemostasis can be achieved with manual compression, with or without hemostatic patches (typically for procedures performed with 4- and 5-F devices), or with closure devices for procedures that require large-bore devices. The safety of both approaches has been demonstrated in several studies.10-14 Immediately after the procedure, the patient should receive care according to well-described protocols by specialist nursing staff under supervision of the interventionalist. Examination of the puncture site and peripheral pulses should be performed every 30 minutes. If a hematoma forms immediately after the procedure, the boundaries of the hematoma should be marked with a skin marker pen. Mobilization should only be allowed under supervision (preferably with a 100-m walking test). When the patient is discharged, instructions should be given concerning bleeding control and appearance of ecchymoses or hematomas, pain, and coldness of the limb. Telephone numbers of where to obtain help in case of questions or complications should be provided.2,8,15 Patients cannot be discharged if they experience complications from the procedure, such as large hematoma, anuria, persistent nausea, and vomiting.7

A proposed workflow is outlined in the Proposed Workflow for CLI Patients sidebar, and a representative case is described in Figure 1. 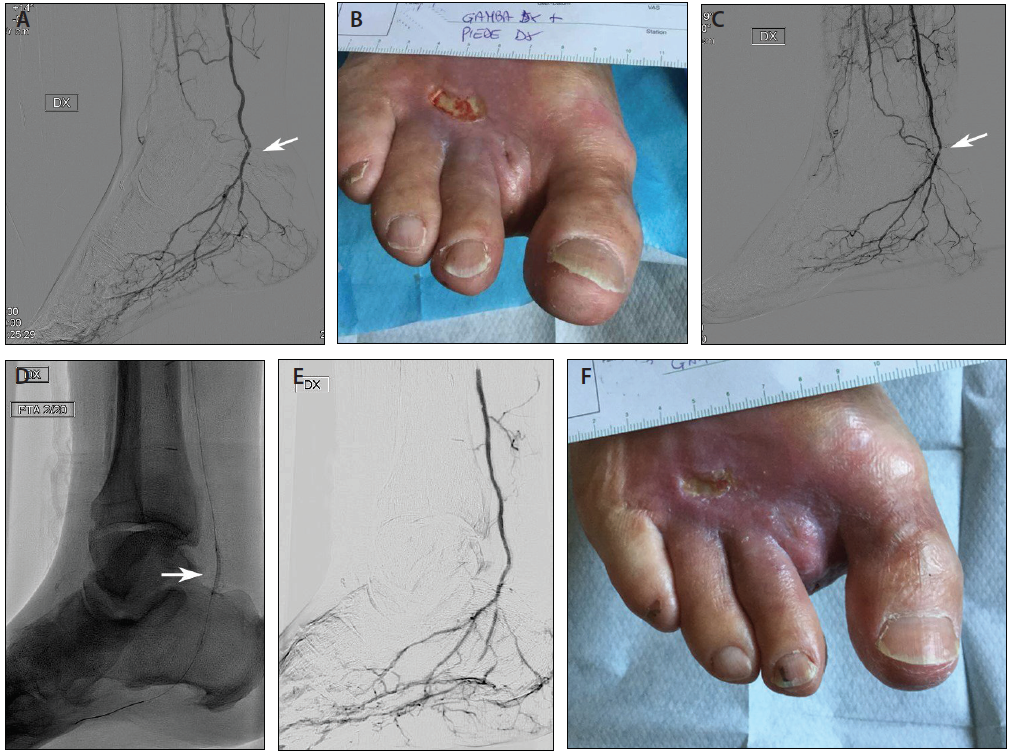 Figure 1. Management of a CLI patient on an ambulatory basis by a multidisciplinary team. The patient had a nonhealing ulcer at the dorsum of the forefoot (base of the third and fourth digit) and amputation of the second toe of the right foot. An angiogram of the right foot was obtained after percutaneous transluminal angioplasty (PTA) and stenting of the superficial femoral artery as well as PTA of the peroneal artery and proximal posterior tibial artery (not shown). Note the absence of the dorsalis pedis artery. A stenosis of the distal posterior tibial artery can be seen (arrow), which was considered nonsignificant (perfusion of the foot had increased significantly after treatment of the inflow) (A). Photograph of the right foot taken 6 weeks after the interventional procedure demonstrating a nonhealing ulcer on the distal part of the dorsum of the foot (B). Angiogram of the right foot delineating the stenosis in the distal posterior tibial artery (arrow); the procedure was performed 3 days after Figure 1B was taken (C). Fluoroscopic image demonstrating an angioplasty balloon inflated at the level of the stenosis (arrow) (D). Selective angiogram demonstrating complete absence of significant stenosis and increased perfusion (angiography in the anteroposterior projection demonstrated good perfusion of the wound area; not shown) (E). Photograph taken 4 weeks after angioplasty of the distal posterior tibial artery demonstrating progression of the wound healing (F).

OUTCOMES OF OUTPATIENT TREATMENT OF CLI

When the procedure is standardized as previously described, more complex procedures (as is typically the case with CLI) can be performed on an outpatient basis. It goes without saying that all other essential elements involved in patient management should be performed on an ambulatory basis (clinical and duplex control ultrasound, wound care; Figure 1) if the CLI patient is being treated as an outpatient. The first description of ambulatory treatment of CLI was published in 2008.16 A large multicenter study that included 652 patients who underwent an endovascular procedure for intermittent claudication (75.6%) or CLI (24.6%) on a day-case basis demonstrated a primary efficacy outcome, defined as the rate of procedures performed on an outpatient basis requiring no further hospitalization, of 95.4%.12 A 6-F sheath was used in more than half of cases. Hemostasis with manual compression was achieved in 52.4% of cases. Freedom from 30-day major complications was 98.6%. All complications occurred the day of the procedure (no complications were seen after same-day discharge). A recent series that included complex endovascular procedures for treatment of CLI showed a low complication rate (2.5%), with 97% of patients discharged the same day.17 These findings compare favorably with a simulation study by Gouicem et al, which demonstrated a feasibility of same-day discharge in 72.7%,18 and a study by Albert et al, which showed a hospital admission rate of 16% (84% successful ambulatory treatment).19

To make outpatient treatment work, a certain learning curve needs to be passed. With increasing experience, reduction in the rate of total complications and conversion to in-hospital stay can be achieved.8,20 There are some initial indications that outpatient treatment may lead to cost reduction. A French study that used closure devices in all (6 F) procedures (n = 50) showed that 42 days of hospital admissions could be saved (there were eight failures of the ambulatory approach), with related cost savings of €10,971. The additional cost for use of the closure device was €7,427.19 With the use of smaller-bore devices that do not require closure devices, the economic benefit may be even larger. This topic is the subject of research in the BIO4AMB study (NCT03044002).

The French Society of Vascular and Endovascular Surgery recently published guidelines for ambulatory treatment based on a systematic review of the literature.21 Some additional recommendations from this systematic review include:

The management and endovascular treatment of patients with CLI on an outpatient basis is feasible and safe, provided specific protocols are established. As with in-hospital treatment, multidisciplinary involvement is a prerequisite.