A review of indications, technical considerations, and current data for surgical bypass.

The coexistence of endovascular intervention and lower extremity bypass as treatments for critical limb ischemia (CLI) can create areas of overlap and uncertainty when deciding between interventions. At times, there can even be clinical equipoise. This article reviews the current indications for the consideration of bypass as a first-line therapy, important principles of surgical technique that may be germane to all forms of revascularization, and recent data regarding the management of CLI.

Intervention is often indicated for patients with CLI as defined by rest pain, nonhealing wounds, or gangrene. As shown in the CLEVER trial, supervised exercise provides durable symptomatic improvement for claudicants with no adverse events,1 and claudication infrequently progresses to CLI with proper risk factor management. Therefore, consideration should be given to the risk of intervention before revascularization for patients with claudication, although follow-up and patient compliance remain critical. For patients with CLI, the BASIL trial advised that relatively fit patients expected to live > 2 years should be considered for operative bypass given the apparent improved durability and reduced reintervention rate of surgery.2 Inversely, those with significant comorbidities or a life expectancy < 2 years should be offered endovascular therapy when possible.

In our experience, the indication for revascularization has an impact on the decision, as larger areas of tissue loss (> 2 cm transverse diameter) have healed more often and more rapidly with bypass.3 Bypass may allow for revascularization of appropriate angiosomes that would be difficult to achieve with endovascular techniques.4 Lesion anatomy also plays a role in the decision because bypass may offer a good choice for patients with chronic total occlusions (TASC D lesions), especially with involvement of the common femoral bifurcation and the profunda femoris artery. Bypass may be best for patients with long, complex tibial artery occlusive disease, particularly if an autogenous conduit is available.5 Finally, failed endovascular therapy can alter future bypass options of the target artery and length of bypass; therefore, a discussion of surgical versus endovascular therapy is warranted after failed endovascular therapy.6

The planning and performance of a surgical bypass are based on three principles: arterial inflow, arterial outflow, and bypass conduit. Arterial inflow provides an adequate source of blood flow, while outflow identifies a target artery (or vein in the rare case of deep venous arterialization [DVA]) that can accommodate the increased flow generated by the bypass to increase perfusion to the target tissue. Due to the success of endovascular interventions above the inguinal ligament, most inflow sources can originate just above or below the inguinal ligament, thereby avoiding the morbidity of open surgical options in the abdomen. Common infrainguinal procedures include femoral endarterectomy with profundoplasty and infrainguinal bypass originating from the common femoral artery.

Appropriate bypass conduit may be the most important and often challenging consideration in planning a bypass. The great saphenous vein remains the optimal choice, either ipsilateral or contralateral, with an established track record of good patency and limb preservation out to 5 to 10 years (Figure 1).7 Five-year limb preservation in excess of 80% can be achieved with the great saphenous vein. Patients with previously harvested or poor quality veins have historically turned to a prosthetic conduit with 2- and 5-year limb preservation rates of 52% and 35%, respectively, for femoropopliteal revascularization.8 Results for prosthetic bypass to the tibial arteries are much less satisfactory.9 An adjunct to improve the performance of prosthetic tibial bypass in those patients without autogenous conduit involves the use of an anastomotic distal vein patch (DVP), which results in a 4-year limb preservation rate as high as 79%.10 The 1-year results are comparable to vein bypass, and the DVP bypass can be offered to patients with medical comorbidities or previous surgery to decrease operative time and magnitude of the procedure while achieving limb preservation.

A number of patients in a CLI practice will present without a suitable distal target artery for bypass or endovascular pedal access. This scenario, often referred to as a “desert foot,” can lead directly to major amputation. Using a method involving the principles of the DVP technique, a common ostium can be surgically created between a tibial arterial segment and corresponding tibial vein to take advantage of decreased outflow resistance, maintain a flow velocity in the bypass graft, and achieve patency. This technique has achieved patency of 64% and a limb preservation rate of 57% at 24 months in this challenging patient population.11 Recently, this procedure has been modified by disrupting two to four valves distally in the tibial vein to establish a component of DVA (Figure 2). DVA may augment retrograde perfusion per the capillary bed to enhance healing and limb preservation. To date, eight cases have been performed with the longest follow-up out to 6 months, with two major amputations in that time period (Richard F. Neville, MD, unpublished data, May 2020).

Prospective randomized data are lacking to guide clinicians in the optimal mode of revascularization for patients with CLI. We anxiously await the results of clinical trials such as BEST-CLI and BASIL-2. Two recent retrospective cohort studies demonstrated equivocal results between surgical bypass and endovascular revascularization. A single-center retrospective study of 108 patients with infrageniculate disease comparing open and endovascular approaches showed no significant difference in major adverse limb events (MALE), overall survival, or amputation-free survival (AFS) at 3 years. However, an endovascular approach was associated with increased reinterventions during the follow-up period.12 In a retrospective analysis of 264 patients with CLI, femoropopliteal bypass and femoropopliteal percutaneous transluminal angioplasty (PTA) were compared, with similar technical success and limb preservation rates for angioplasty and bypass for femoropopliteal revascularization. Additionally, patients deemed suboptimal for surgical bypass had inferior initial technical success and limb preservation, although the DVP technique was not used. Angioplasty was associated with a shorter hospital stay and fewer reinterventions for procedural complications.13

Several database analyses have been performed to address the question of surgical versus endovascular revascularization. An analysis based on the National Surgical Quality Improvement Program (NSQIP) database reviewed patients with CLI and isolated infrageniculate disease who underwent bypass-first or endovascular-first revascularization. The analysis demonstrated lower amputation rates in patients who underwent bypass first as compared with endovascular-first patients (4.3% vs 7.4%; 95% CI, 0.36–0.98) but higher wound complication rates (9.7% vs 3.7%; 95% CI, 1.71–4.42), increased major adverse cardiovascular events (MACE) (6.9% vs 2.6%; 95% CI, 2.18–6.88), and higher 30-day mortality rates (3.23% vs 1.8%; 95% CI, 1.26–6.11).14 No differences were noted in MALE, 30-day loss of patency, reintervention, readmissions, or reoperations. However, as with all NSQIP studies, the analysis is limited to the short term without follow-up beyond the perioperative period. With the addition of a propensity score adjustment, an observational study of Medicare claims data (N = 36,860) relating to CLI demonstrated significant differences in all-cause mortality between revascularization strategies (angioplasty, 54.7%; stent deployment, 53.7%; surgical bypass, 51.4%; P < .05 for all pairwise comparisons).15 In this analysis, surgical bypass patients had a higher amputation rate (10.8%) versus angioplasty (8.1%) and stent deployment (7.8; P < .05 for all pairwise comparisons except PTA vs stent).

Financial considerations and procedural cost may become increasingly important factors in decision-making for the mode of revascularization. A retrospective analysis of Medicare claims data of CLI-associated coding and cost was performed over 4 years. The analysis included > 72,000 patients after an initial diagnosis related to CLI. There was a significant improvement in survival for patients undergoing surgical bypass (40%; median, 2.9 years) and endovascular revascularization (38%; median, 2.7 years) as compared with amputation (23%; median, 1.3 years; P < .001).16 Cost per patient-year during follow-up was significantly lower for both surgical ($49,200) and endovascular ($49,700) revascularization, with major amputation associated with the most expense ($55,700) to the health system. This analysis supports the concept that revascularization by appropriate means is superior to amputation in terms of patient survival and financial implications to the health system.

When evaluating current studies, it is important to remember most are retrospective and often do not take into account confounding clinical variables that would add selection bias to those receiving a particular type of intervention. The BEST-CLI and BASIL-2 studies are international, multicenter, prospective trials that will add much to our understanding of lower extremity revascularization.

Determinants of Long-Term Outcomes and Costs in the Management of Critical Limb Ischemia: A Population-Based Cohort Study

A subset of patients in need of revascularization for CLI has been identified that we believe is best treated with surgical bypass (Table 1). This cohort is approximately 25% of our tertiary care limb preservation practice. Advances in technology and technique continue at a rapid pace and will certainly impact future clinical decisions. Without a doubt, health care costs will also factor into this process. Hopefully the future will also bring additional information from dedicated prospective trials such as BEST-CLI and BASIL-2 to add clarity to managing this disease process. Currently, close communication between interventionalists and bypass surgeons is paramount to providing the optimal care for patients with CLI. 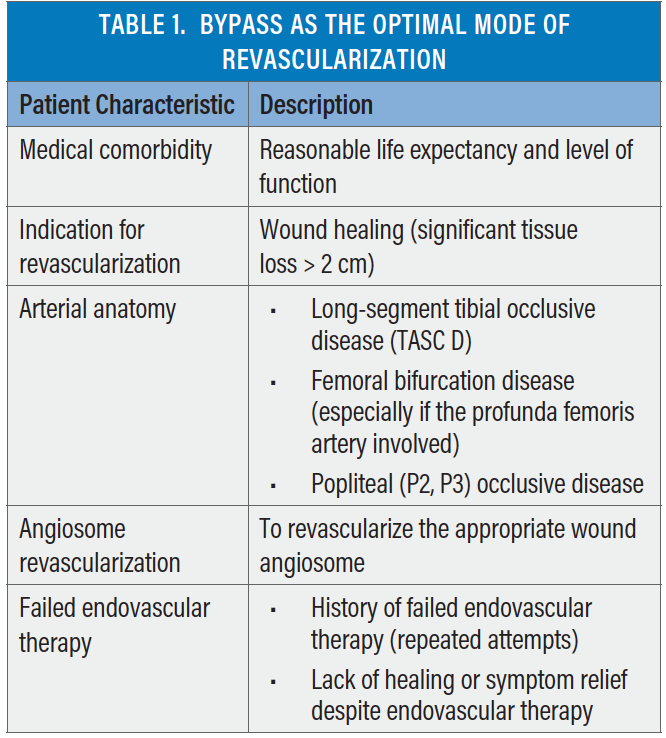 Ask the Experts: Repeat Revascularization in Rutherford 5/6 Patients: What Is Your Point of No Return?