Identifying Clopidogrel Resistance in the Setting of TCAR

Dual antiplatelet therapy (DAPT) in addition to statins has become the cornerstone medical treatment of cerebrovascular disease requiring carotid stenting. The combination of aspirin and a thienopyridine following coronary intervention became widespread in the late 1990s after studies showed it to be superior to aspirin plus anticoagulation in reducing stent thrombosis and bleeding risk. Shortly thereafter, studies were performed evaluating this combination therapy in cerebrovascular intervention demonstrating similar findings. Current guidelines from most major societies recommend the use of DAPT both pre- and postoperatively in carotid artery stenting.

The most common antiplatelet medication used today in addition to aspirin is clopidogrel. A second-generation thienopyridine, clopidogrel is a prodrug that undergoes two-step hepatic metabolism involving the cytochrome P450 (CYP) system. Thus, the onset of action of clopidogrel is relatively slow because it requires conversion to its active metabolite. Medications or disease processes that interfere with the CYP system can lead to clopidogrel resistance or diminished antiplatelet effect. In addition, gene polymorphisms can cause a patient to be a slow metabolizer or nonresponder. These two mechanisms leading to clopidogrel resistance expose patients to the risks associated with aspirin monotherapy. Beyond this, patient noncompliance, reduced bioavailability, increased platelet turnover, competitive inhibition by less potent antagonists, and other factors may impede the desired effect of both aspirin and clopidogrel.1,2 Failure to achieve sufficient levels of platelet inhibition with either drug have been correlated with undesirable cardiovascular outcomes.3,4

Clopidogrel resistance is not an uncommon phenomena. Literature suggests that this is an issue in 15% to 48% of the population.5-7 Identifying these patients is important, as other steps can be taken in their treatment algorithm to provide them the protection of DAPT. The gold standard of testing is light transmission aggregometry, however this is time-consuming and cumbersome. Several commercial point-of-care tests are now available that are quicker and easier to apply clinically.

Thromboelastography (TEG) is a whole blood assay that tracks the formation and destruction of thrombus over time as measured by variations in clot strength. It provides information regarding coagulation, platelet aggregation, and fibrinolysis. TEG has become increasingly available as it is useful to guide blood product therapy in the settings of trauma and cardiac surgery.8 Results are delivered as easily recognizable traces and numerical values that describe clot kinetics. The maximum amplitude (MA) of the trace in millimeters quantifies peak clot strength and is representative of platelet function.

TEG has been further developed to test for platelet inhibition through the addition of adenosine diphosphate (ADP) or arachidonic acid (AA) to the samples. This allows discrimination of the contribution of the P2Y12 and cyclooxygenase pathways to clot formation. Results are expressed as the MA-ADP and MA-AA, or more intuitively, as the percentage of inhibition of ADP- or AA-mediated pathways. More than 30% ADP inhibition and > 50% AA inhibition are considered therapeutic.9 Later publications suggest that an MA-ADP under 47 mm correlates best with the avoidance of ischemic events following coronary stenting.10

In one early case experience, a patient undergoing transcarotid artery revascularization (TCAR) sustained an ipsilateral stroke 12 hours after surgery. Preoperative compliance with DAPT had been confirmed and imaging excluded a technical issue. The event was initially attributed to plaque extrusion through the stent, but was later considered to be due to clopidogrel resistance. TEG with platelet mapping showed a subtherapeutic MA-ADP of 49 mm and borderline AA inhibition of 49%. The next day, after a loading dose of an alternative P2Y12 inhibitor and an increase in the aspirin dose from 81 mg to 325 mg, his MA-ADP was 45 mm, and AA inhibition was 91%. The patient avoided further neurologic events and had a good recovery. A subsequent decision to test platelet function on every patient the morning of their TCAR led to changes in management of 20% to 30% of cases at Hattiesburg Clinic Vascular Specialists, which is in line with literature reports.11 A consistent correlation has been seen at our institution between medication manipulations and changes in TEG parameters, and it has been recognized that 81 mg of aspirin is not universally effective.

A man undergoing staged bilateral TCAR was shown to have clopidogrel resistance. Given his recent history of stroke, he was loaded with ticagrelor. His MA-ADP fell below 47 mm, and he underwent an uneventful first operation that same day. A few weeks later, he returned on a Tuesday for his contralateral stent and answered positively to taking aspirin and ticagrelor that morning. Surprisingly, his MA-ADP was once again subtherapeutic. Upon further questioning, he admitted to missing his weekend doses of ticagrelor and resumed medication the day prior to surgery. He received a loading dose, his MA-ADP responded adequately, and his second TCAR was uneventful as well.

The VerifyNow system (Accriva Diagnostics) involves measurement of P2Y12 reaction units (PRU). The desired level of PRU is < 180, and partial response is considered from 180 to 208. A PRU > 208 is considered a nonresponder. At Abbott Northwestern, partial responders are treated with a doubled clopidogrel dose of 150 mg daily. Nonresponders and those who don’t respond to the increased dosage are switched to an alternative antiplatelet. Every effort is made to obtain this lab after a week of treatment; however, symptomatic patients don’t always afford the luxury of time. In these patients, a baseline PRU is obtained to assist in interpreting the response after therapy is initiated. If there is no significant reduction in PRU, the patient is switched to an alternative antiplatelet (Table 1).

Utilizing this protocol, 20.4% of patients at Abbott Northwestern required a change in therapy. Nine percent of patients were found to be partial responders who responded to an increased dose of clopidogrel. An additional 11% were nonresponders who required a switch to an alternative antiplatelet medication (Figure 1). There were no bleeding or embolic complications noted that could be attributed to the DAPT regimen. 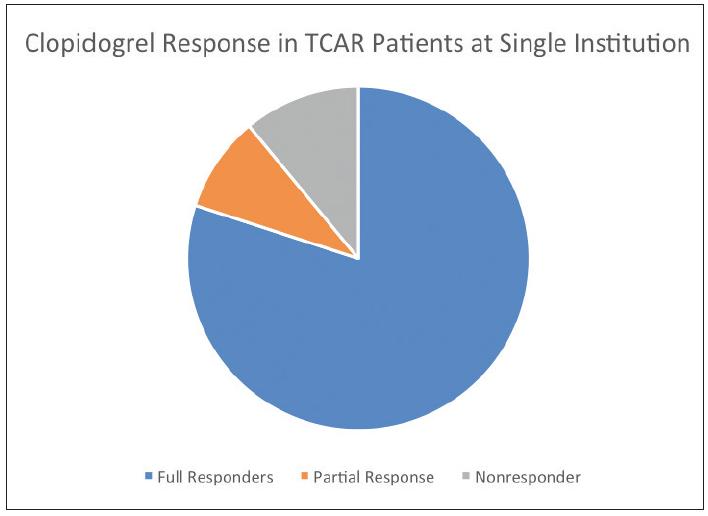 Figure 1. Of the tested patients undergoing TCAR at Abbott Northwestern, 9% were partial responders and 11% were nonresponders who required a change in antiplatelet medication.

Because both mechanisms of clopidogrel resistance result in decreased bioavailability, some patients may simply require a higher dose of clopidogrel to obtain the desired response. Those who are complete nonresponders or who do not reach the desired inhibition with increased dosing may require a switch to an alternative antiplatelet medication.

Prasugrel, a third-generation thienopyridine, is a common alternative. It is also a prodrug; however, it only requires single-stage activation, making it less prone to genetic metamorphisms and CYP alterations. When compared to clopidogrel, prasugrel showed decreased risk of stent thrombosis, myocardial infarction, or cardiovascular death but had an increased risk of major bleeding and life-threatening bleeds.12 In addition, this medication tends to be more costly for patients.

Ticagrelor is another alternative. Similar to thienopyridines, it binds to P2Y12 to antagonize the ADP receptor on platelets. However, unlike clopidogrel, this binding is reversible and does not require hepatic enzymatic activation, potentially providing less drug interaction and more reliable inhibition.

Clopidogrel resistance is not uncommon, and missing the identification of these patients potentially deprives them of the known benefits of DAPT. Although demonstration of suboptimal platelet inhibition through various assays has been repeatedly associated with undesirable outcomes, wider application of these technologies has failed to yield improved results. Whether this represents a failure of the concept or simply a need for further technical refinement remains to be determined. In the meantime, preoperative platelet testing is in keeping with best efforts to ensure an indispensable element of carotid intervention is delivered. The implementation of clopidogrel response testing and medication protocol is recommended to help achieve the best outcomes in TCAR.