Background and evidence base regarding carotid restenosis after previous carotid stent placement or carotid endarterectomy.

Ischemic stroke represents a significant health-related problem and is a major cause of disability throughout the world. Atherosclerosis of the carotid bifurcation is thought to account for approximately 20% of all ischemic strokes.1 Most of these (nearly 80%) may occur without warning. Multiple trials and studies have been performed to evaluate the safety and effectiveness of carotid endarterectomy (CEA) and carotid artery stenting (CAS). Recent randomized controlled trials suggest that CEA and CAS achieve similar long-term outcomes in terms of ischemic stroke reduction for up to 10 years.2-4 The 10-year data from the CREST trial have also shown no difference in restenosis or revascularization between CEA and CAS at 10 years.3 Compared with CEA, CAS is associated with significantly lower risks of myocardial infarction (MI), cranial nerve palsy, and access site hematoma.2 However, in every randomized trial and analysis comparing CAS with CEA, CAS is associated with a two- to three-fold increase in 30-day minor stroke compared with CEA, which has significant impact on quality of life. Concerns for restenosis after CAS have been expressed by many surgeons. Restenosis and occlusion after CEA and CAS have been reported to have a low incidence and no difference at 2 years in a large randomized controlled trial. A restenosis rate of > 70% by duplex criteria at 2 years was found to be 6% in CAS and 6.3% in CEA.5 Risk factors for CAS restenosis have been described and include female sex, dyslipidemia, and diabetes. There is some uncertainty on the significance of CAS in-stent restenosis (ISR). A recent systematic review and meta-analysis showed a weighted incidence of restenosis > 70% was 5.8% after CEA (median, 47 months) and 10% after CAS (median, 62 months). In CAS patients with untreated asymptomatic > 70% restenosis, the rate of ipsilateral stroke was extremely low (0.8% over 50 months). CEA patients with untreated, asymptomatic > 70% restenosis had a higher rate of ipsilateral stroke but it was only 5% at 37 months.6 Another large randomized, controlled trial also reported restenosis and risk of stroke after stenting or endarterectomy for symptomatic carotid stenosis. Moderate (≥ 50%) restenosis was more common in the stenting group compared to the endarterectomy group. Patients with moderate stenosis had a higher rate of ipsilateral stroke than did individuals without restenosis in the overall population and in the endarterectomy group alone, but no significant increase in stroke risk after restenosis was recorded in the stenting group. There was also no difference in the risk of severe restenosis (≥ 70%) or subsequent stroke between the two treatment groups.4

Despite the well-known entity of CAS ISR, there are discordant data on treatment strategies. No clear treatment algorithm has been accepted at this time. Treatment options include medical management and balloon or cutting balloon angioplasty performed alone or in conjunction with stenting. Reports of percutaneous transluminal angioplasty with drug-coated balloons have been reported after 2005. CEA with explantation of the carotid stent and carotid artery interposition grafting has also been described. There is also a report of a balloon-expandable zotarolimus-eluting stent used to treat significant ISR after CAS.7 The interventional strategies of drug-coated balloons, drug-eluting stents, or cutting balloons do not have an FDA-approved labelled indication for the management of carotid ISR.

The pathology of carotid ISR is not fully understood, but likely results from vessel trauma causing endothelial dysfunction and chronic inflammation leading to subsequent neointimal hyperplasia (Figure 1). This generally occurs < 24 months after the first procedure or later as de novo atherosclerosis. The clinical impact of neointimal hyperplasia is uncertain, but is thought to be associated with reduced potential for embolization compared to native lesions. 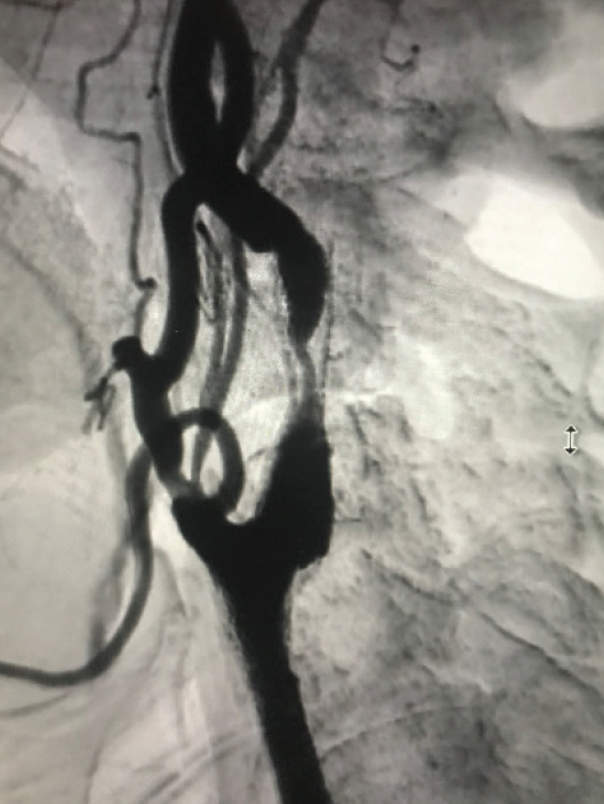 Another etiology for carotid ISR is underexpansion of the initial stent, possibly from external compression due to significant calcification (Figure 2). Heavily calcified carotid arteries have traditionally been excluded from all major clinical trials, although there are reports of successful CAS in this setting.8,9 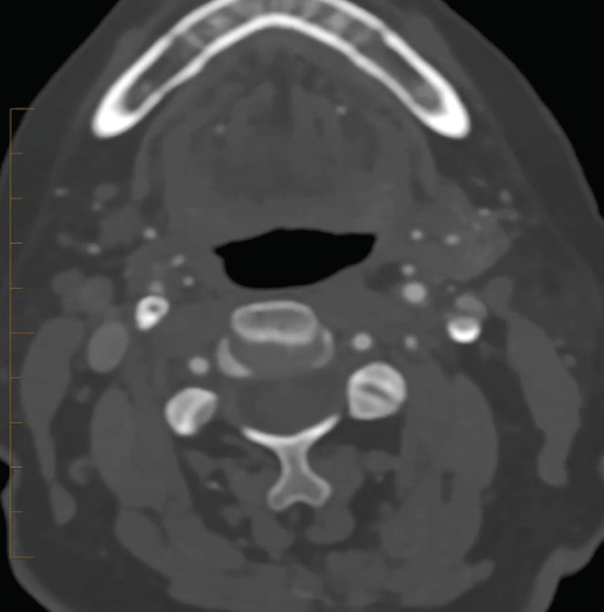 Multiple tests can be performed to make the diagnosis of carotid ISR, including carotid duplex ultrasound, CTA, MRA, and digital subtraction angiography. Most institutions start with duplex ultrasound given that it is noninvasive, does not require contrast exposure or radiation, and has a relatively high sensitivity and specificity when compared with digital subtraction angiography or CTA. Metallic artifacts can hamper the use of MRA for surveillance of carotid ISR and thus are often not performed. Multiple studies have reported different parameters and cut-off values for ISR definition. Stented arteries have different biomechanical properties than native vessels, resulting in more rigidity and stiffness (essentially reduced compliance) leading to increased velocities. The Society for Vascular Surgery has established an optimal velocity threshold criteria for varying severity of ISR after CAS.10 It has been suggested to obtain a new baseline carotid duplex ultrasound after CAS and use this as reference going forward to help in diagnosis of significant CAS ISR. The timing of the diagnosis also plays a factor in decision making and treatment of the patient. Early detection (< 24 mo from procedure) of CAS ISR usually results from neointimal hyperplasia, but stent compression or lack of stent expansion also needs to be considered. This can usually be determined by duplex ultrasound, but if there is significant acoustic shadowing from the calcification, other diagnostic modalities such as CTA might be helpful. If the diagnosis is made > 24 months from the initial procedure, atherosclerotic disease is generally considered to be the etiology.

There have also been different patterns of restenosis identified, with implications for long-term outcomes and a need for target lesion revascularization. Patterns of carotid ISR with diffuse proliferative disease demonstrated the highest rates of reintervention.11

Despite knowing for many years that endovascular treatment of carotid stenosis can lead to CAS ISR, the treatment of CAS ISR is still largely debated with no clear treatment protocols given the paucity of sufficient data. A reasonable first step to prevent CAS ISR is to identify and treat modifiable risk factors. Diabetes, dyslipidemia, and smoking have all been identified as predictors of restenosis or occlusion after CAS. Thus, good glycemic control and low levels of HgA1C should be recommended. Statins have also been recognized for their integral role is dyslipidemia management and their pleotropic effects, such as plaque stabilization. Their use is associated with a decreased perioperative and long-term ischemic stroke risk. Finally, tobacco cessation should strongly be encouraged. There are no specific pharmacologic agents to reduce the incidence of carotid ISR. A meta-analysis has shown promising effects for cilostazol. In this analysis, 1,297 patients were treated with CAS and cilostazol showed a significant reduction in CAS ISR after a mean follow-up of 20 months without affecting MI/stroke/death.12

When looking to treat CAS ISR patient selection at the initial procedure is very important. Risk factors for CAS ISR have been identified, as mentioned previously, and if possible the procedure should potentially be avoided if other treatment options exist. If CAS is determined to be the best treatment option for that patient, close follow up and surveillance for ISR should be performed.

Who, when, and how to intervene on patients that develop CAS ISR is up for debate. Many TCAR users might not have significant or any experience with transfemoral CAS and thus have not traditionally had to deal with carotid ISR until now.

In symptomatic patients on maximal medical therapy with dual antiplatelet therapy and high-intensity statin with > 50% ISR and no other source for ischemic stroke, re-intervention seems reasonable for that vast majority of patients unless a palliative approach is taken due to stroke severity or other comorbid conditions. The interventional approach can include a transfemoral, transcarotid, or open surgical repair. The transfemoral and transcarotid approach can include balloon or cutting balloon angioplasty with or without stent implantation. The transcarotid approach offers the potential benefit of improved neuroprotection and avoidance of any aortic arch disease compared to a transfemoral approach, but could be limited by the access length required to safely insert the sheath given the prior stent. Although there are reports of drug-eluting balloon and stent technology used in the carotid bifurcation, currently there are no FDA-approved devices for this indication. Open surgical repair with carotid stent removal is also another potential option. This can include primary repair of the artery, interposition grafting or closure with vein or prosthetic patch. The artery can often be very thin after removal of stent and gaining proximal or distal control for open repair can be challenging depending on the patient’s anatomy and previous stent placement.

My personal approach in this patient population would include a transcarotid approach if there is adequate length to safely place my sheath and there was no significant disease at my access site. This would include a redo cutdown on the common carotid artery if the prior stent was placed from a transcarotid approach. My initial trepidation with this and concern for significant scarring associated with redo surgery has not been realized when performing the redo cutdown at the base of the neck. Because the lesion is symptomatic there is often concern about thrombus or lose debris within the stent/lesion. With this in mind, placing another stent in the target lesion may be preferable. If a transcarotid approach is not possible, I would evaluate for a transfemoral or open approach. If the symptomatic CAS ISR is amenable to open repair, this is my preference. If it is related to external stent compression from a calcified lesion and underexpanded stent, open surgical repair is preferable. If neither a transcarotid nor open approach is feasible and the arch does not have significant disease, a transfemoral approach would be discussed. If performed, the intervention would be the same as a transcarotid approach.

A somewhat more difficult clinical scenario is an asymptomatic patient who develops significant CAS ISR. In patients who are asymptomatic and have < 70% ISR, medical management with antiplatelet agents, high-intensity statin therapy, good BP control, and tobacco cessation seems to be most appropriate. What about patients who develop > 70% ISR and are asymptomatic? The optimal treatment for this patient population is also unclear at this time, but we do have some data to help guide our patients. Certainly, maximal medical therapy with risk factor modification is the mainstay but who, if any, should be intervened on? Does the pathology of the CAS ISR make a difference on who to intervene on? What about the timing of CAS ISR if it is ≤ 2 years from the time of the initial procedure? What if there is a contralateral occlusion? These are the difficult clinical scenarios we face every day in our profession. Fortunately, the risk of ipsilateral stroke from a recurrent CAS ISR appears to very low. A systematic review and meta-analysis has demonstrated a low rate of late ipsilateral stroke of 0.8% over 50 months in patients with untreated asymptomatic > 70% CAS ISR.5 In addition, the use of a percutaneous intervention for CAS ISR does not appear to improve outcomes compared with nonoperative management.13 Given the current data, a noninterventional approach seems to be reasonable until further studies address this issue. These clinical scenarios can often be confusing and worrisome to the patients we treat. Why did we recommend treating the initial carotid lesion that might have been > 70%, but now we might recommend medical management alone for > 70% CAS ISR? This is when patience, time, and good communication pays off in our clinic visits.

Carotid Bifurcation: An Analysis of Straightforward Lesions and Those With Additional Challenges

By Angela A. Kokkosis, MD, and Peter A. Schneider, MD