Advancing the Science of Laser Atherectomy for Peripheral Artery Disease

A review of clinical data on the Auryon laser atherectomy system and the laser parameters that contribute to optimal outcomes.

Atherectomy procedures use catheters to remove the buildup of plaque in arteries that have become narrowed or occluded. There are three types of atherectomy devices on the market that are designed to cut, shave, or vaporize atherosclerotic or calcified plaques: directional, rotational, and laser. Directional atherectomy includes the HawkOne (Medtronic) and the optical coherence tomography–guided Pantheris device (Avinger, Inc.). Rotational atherectomy includes the peripheral Rotablator rotational atherectomy system (Boston Scientific Corporation), Diamondback 360 (Cardiovascular Systems, Inc.), Jetstream atherectomy system (Boston Scientific Corporation), Rotarex S (BD Interventional), and Phoenix atherectomy system (Philips). Laser atherectomy includes the CVX-300 Excimer laser system (Philips) and the Auryon system (AngioDynamics, Inc.). Each device has its own strengths and weaknesses derived from the product’s attributes. However, the lack of data and complete understanding of the science behind these devices has prevented the technologies from being used as the default therapy. For these technologies to be adopted as a frontline therapy, it is extremely critical to understand the physics behind its operation. This article focuses on the Auryon laser atherectomy system, which showed significant promise in the recently concluded EX-PAD-03 trial, and the laser parameters that play a vital role in providing optimal patient and procedural outcomes.1,2

The CVX-300 Excimer laser system uses a mixture of a rare gas and halogen, xenon monochloride (XeCl), that emits radiation at a wavelength of 308 nm, fluence output between 30 and 80 mJ/mm2, repetition rate between 25 and 80 Hz, and pulse width of 125 to 200 ns. It weighs 650 lb and occupies 8 sq ft. In contrast, the Auryon laser system shown in Figure 1 weighs 187 lb and occupies slightly more than 2.5 sq ft. It is a solid-state, third-harmonic Nd:YAG laser with a wavelength of 355 nm, fluence between 50 and 60 mJ/mm2, repetition rate of 40 Hz, and pulse width of 10 to 25 ns. As discussed by Herzog et al, 355-nm laser sources possess short pulse durations, making them superior candidates for opening arterial occlusions (particularly calcified lesions).3 Thus, laser parameters are very critical in determining overall performance, especially during atherectomy procedures. The following section discusses the major parameters that determine the safety and efficacy of the laser system in the treatment of peripheral artery disease (PAD). 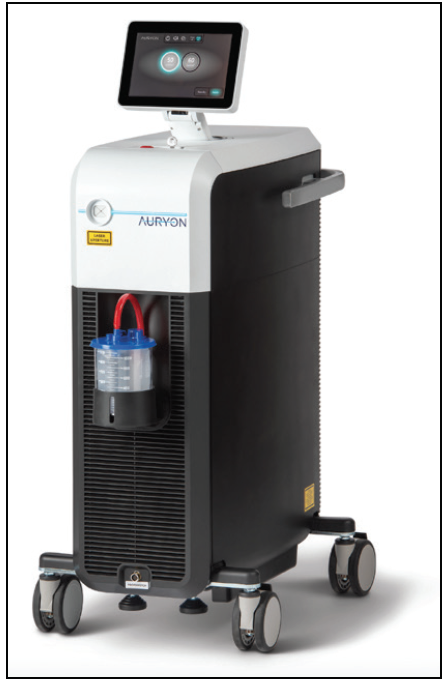 Wavelength determines absorbed/scattered energy and penetration depth, and longer wavelengths generally have weaker absorption.4 Absorption depth is a critical component of atherectomy because the interaction between tissue type and wavelength varies and the potential for perforation or dissection exists. The Philips Excimer laser has been associated with a 13.1% dissection rate, likely attributed to high peak pressures in contrast media and blood.5,6 This is due in part to the high optical absorption of the 308-nm wavelength. In the presence of iodine-based contrast media, pressures are two times higher than in blood, making a saline flush (flush and bath) necessary to remove any contrast in the vessel before use.7,8 This process is challenging, especially in cases of chronic total occlusions (CTOs). Also, the photon energy of the 308-nm Excimer laser is 4 eV and can dissociate common organic bonds found in vessel walls, such as carbon-carbon (3.6 eV) and carbon-oxygen (3.6 eV), which explains why the laser can be used to ablate lesions but also cause perforations. In contrast, the Auryon system has a longer wavelength, weaker photon energy absorption, and minimal interaction with contrast media. The result is targeted biological interactions without a contrast flush requirement.7

The 355-nm wavelength and photon energy of 3.5 eV of the Auryon system yields a threefold higher affinity for lesion tissue than for vessel endothelium. This means that the laser can cause photomechanical ablation in lesions while practically avoiding photochemical dissociation of bonds in the vessel endothelium, thereby resulting in zero flow-limiting dissections and perforations, as seen in the EX-PAD-03 investigational device exemption (IDE) trial.1-3

Other parameters that play an essential role are pulse width and amplitude. Pulse width (pulse duration) is the length of time each pulse is delivered (Figure 2).9 In short pulses, modest amounts of energy may be condensed into high peak power, as expressed by the following equation: pulsed energy = (peak power) × (pulse duration). The Auryon system uses shorter pulses to create acoustic waves (cavitation bubbles in liquid). These photomechanical interactions (force per unit area) create pressure transients that evaporate target tissue.10 Adjusting the size and shape of these pressure waves allows for localization and optimization of the ablation while minimizing collateral damage.11 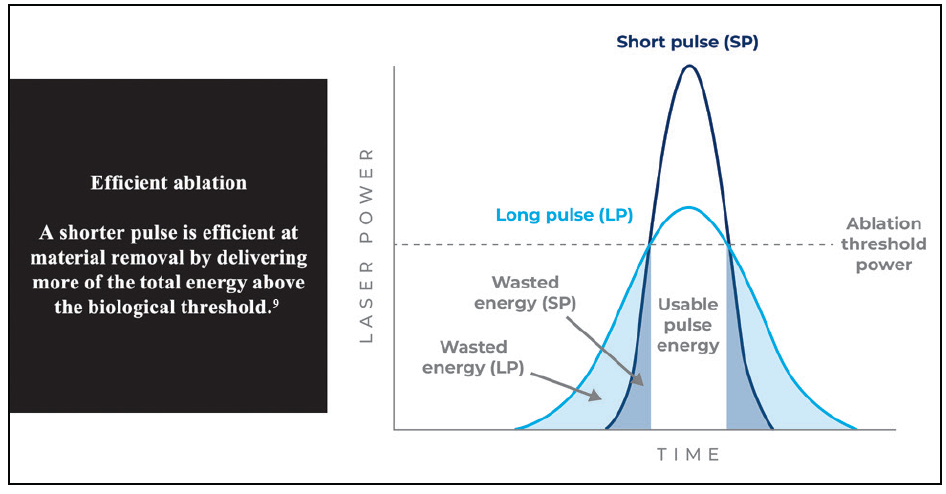 A laser’s amplitude determines the fluence, defined as the delivered energy divided by the area of the projected beam.12 The fluence and intensity required for ablation varies based on numerous characteristics of the specified lesion. These characteristics include the degree of calcification, fibrosis, and morphologic arrangements of layers. The Philips Excimer laser pulse width is often restricted due to concerns of fiber-optic damage and kept in a range of 125 to 200 ns. For lesions that may be highly calcified, the power produced from this range may not be enough for complete ablation. However, the Auryon system has been shown to be highly effective in severe calcifications, achieving delivery of approximately 10 times shorter pulse widths and resulting in 10 times the laser power and intensity, while maintaining the same fluence and energy.1,2

The Auryon system consists of single-use catheters (Figure 3) that come in four sizes ranging from 0.9 to 2.35 mm (4-7 F). The catheters can be used above and below the knee, including below the ankle. All catheter sizes work with a standard 0.014-inch guidewire. Built-in aspiration capability is available in the 2- and 2.35-mm catheter sizes, which allows for removal of debris and addresses the risk of distal embolization. Additionally, the 2.35-mm catheter has an off-centering mechanism for large lumen creation and eccentric lesions. This mechanism lets the user keep the catheter tip in the direction of the artery trajectory to avoid deflection off the vessel wall, while allowing for more debulking. 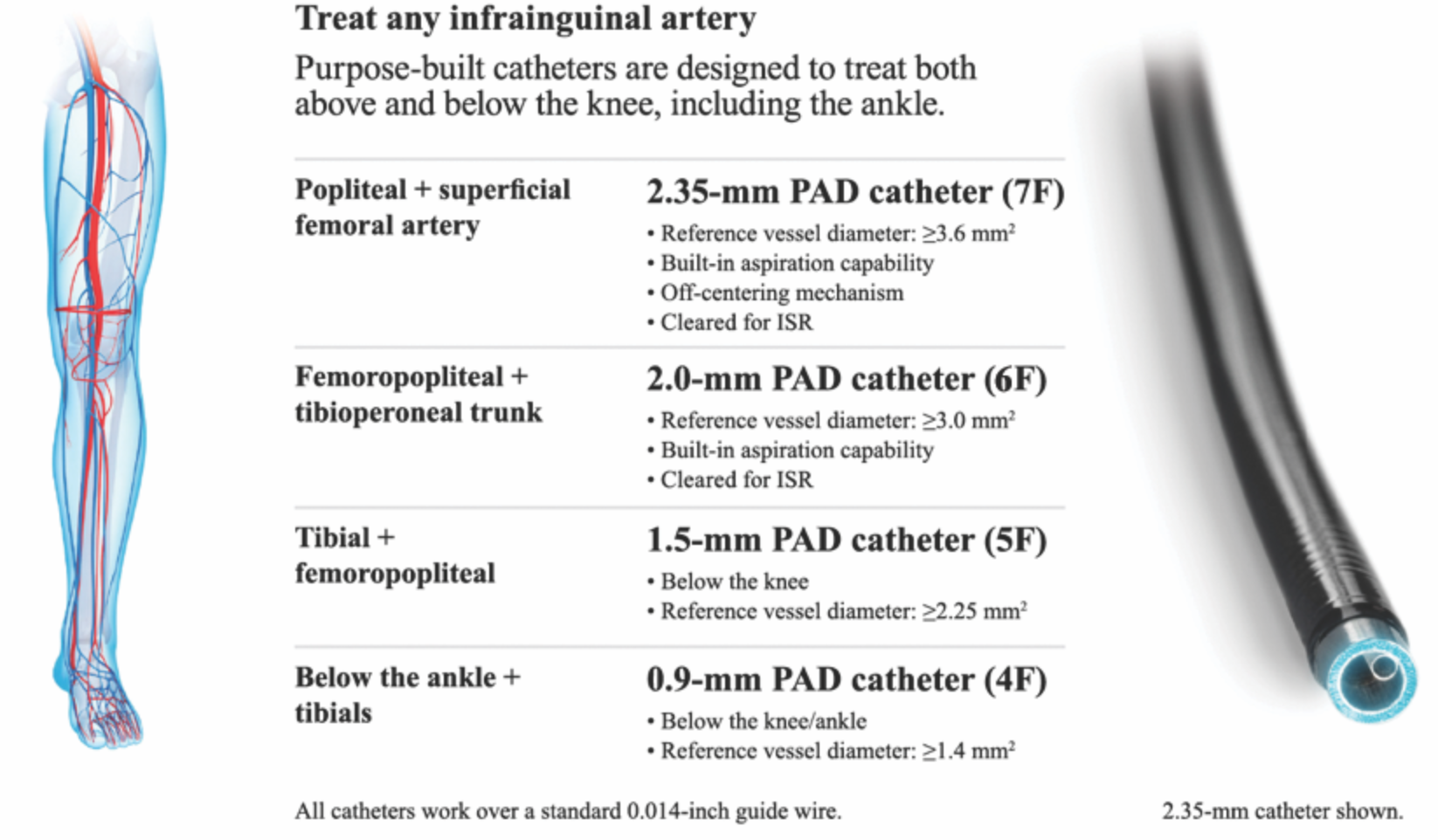 Results showed that the average reduction in residual stenosis after atherectomy alone, prior to any adjunctive therapy, was 33.6% and was not affected by degree of calcification, lesion type, or length. The average final stenosis after adjunctive therapy was 17.7% and was similar between the subgroups of lesion types and the type of adjunctive therapy administered. Clinically driven target lesion revascularization occurred in 3% of lesions, with none in the ISR group. The average improvement in Rutherford class was two points, and 93% of patients showed improvement. There was one major adverse event (non–device-related death), no perioperative device-related complications requiring intervention, and no dissections greater than grade C after balloon angioplasty. Additionally, there were no perioperative distal embolizations, and only two filters were used. Bailout stenting was reported in one patient but was determined to be unrelated to the atherectomy.1 This can be compared to the CELLO Excimer trial, which saw a 23% stent use rate.13

Figure 4 shows the treatment of an occluded superficial femoral artery in an elderly patient with severe claudication of the left lower leg. The procedure (with percutaneous transluminal angioplasty and drug-coated balloon) resulted in no distal embolization or arterial dissection, as seen in the intravascular ultrasound images (Figure 5).

Figure 5. Intravascular ultrasound of the superficial femoral artery before (A) and after (B) treatment with the Auryon system and adjunctive therapy.
Courtesy of Dr. Nicolas Shammas.

Multiple devices and therapies are required during a PAD procedure due to the diverse nature of the lesions (types, lengths, locations). With a 355-nm wavelength and short pulse width of 10 to 25 ns, the Auryon system appears to allow for successful luminal gain regardless of lesion morphology, including moderate and severe calcific plaque.1,2 The 355-nm, wavelength-based solution has an affinity that is three times higher for lesion tissue than for vessel endothelium, providing interventionalists the ability to ablate the lesion while preserving vessel endothelium and addressing the risk of clinically significant dissections and perforations. Additionally, it is nonreactive to contrast media, which allows for debulking of lesions while simultaneously monitoring fluoroscopy images. The 10- to 25-ns, 40-Hz high-intensity pulses result in vaporization of tissue without thermal ablation.

The Auryon system is also three times smaller and lighter than current laser atherectomy devices, with a solid-state medium that allows for short warm-up time (approximately 15 seconds) and no need for catheter calibration. Clinically, studies have shown lower perforation and flow-limiting dissection risk, thereby making the Auryon system a valuable addition to the atherectomy market. Specifically, this laser system treats all levels of calcification (also indicated for ISR) above and below the knee, is nonreactive to contrast media, addresses the risk of perforations, has built-in capabilities for eccentric lesions in the largest catheter and aspiration in the two largest catheters with excellent safety profile, and is designed to be portable and quiet.

Indications for Use: The AURYON™ Atherectomy System is indicated for use in the treatment, including atherectomy, of infrainguinal stenoses and occlusions, including in-stent restenosis (ISR).

Insights and experiences gained during the pandemic to date.

Insights and experiences gained during the pandemic to date.