Vascular grafting using prosthetic grafts has been standard practice for decades. Recent developments have resulted in prosthetic vascular grafts capable of early cannulation. Three-layer grafts have been documented to markedly reduce suture-line and dialysis needle bleeding.1 The Flixene graft is a three-layer graft fully composed of expanded polytetrafluoroethylene (ePTFE) and is designed for use in both vascular bypass and arteriovenous (AV) access graft applications (Figure 1). The Flixene early access graft allows cannulation as early as 24 hours, which offers the potential for either avoidance or reduction of central venous catheters while providing durable, reliable AV access. The tunneling system and the flexible polyethylene sheath facilitate placement and may help reduce infection at the time of implantation. This article summarizes the existing literature on the Flixene early access AV graft and compares it with the experience of my own practice.

Multiple articles have reported that the Flixene vascular graft is a durable and reliable conduit for use in dialysis access (Table 1).2-16 The Flixene graft has been used in up to 500 procedures with follow-up as long as 36 months, with acceptable or favorable patency rates especially when compared with brachiobrachial fistula and other prosthetic grafts. The consensus was that Flixene is a safe and effective graft for use as an early access conduit with low complication rates. There were no concerns related to technical difficulties, such as the ability to cut or modify. The use of the Flixene graft has been reported in complex patient populations. 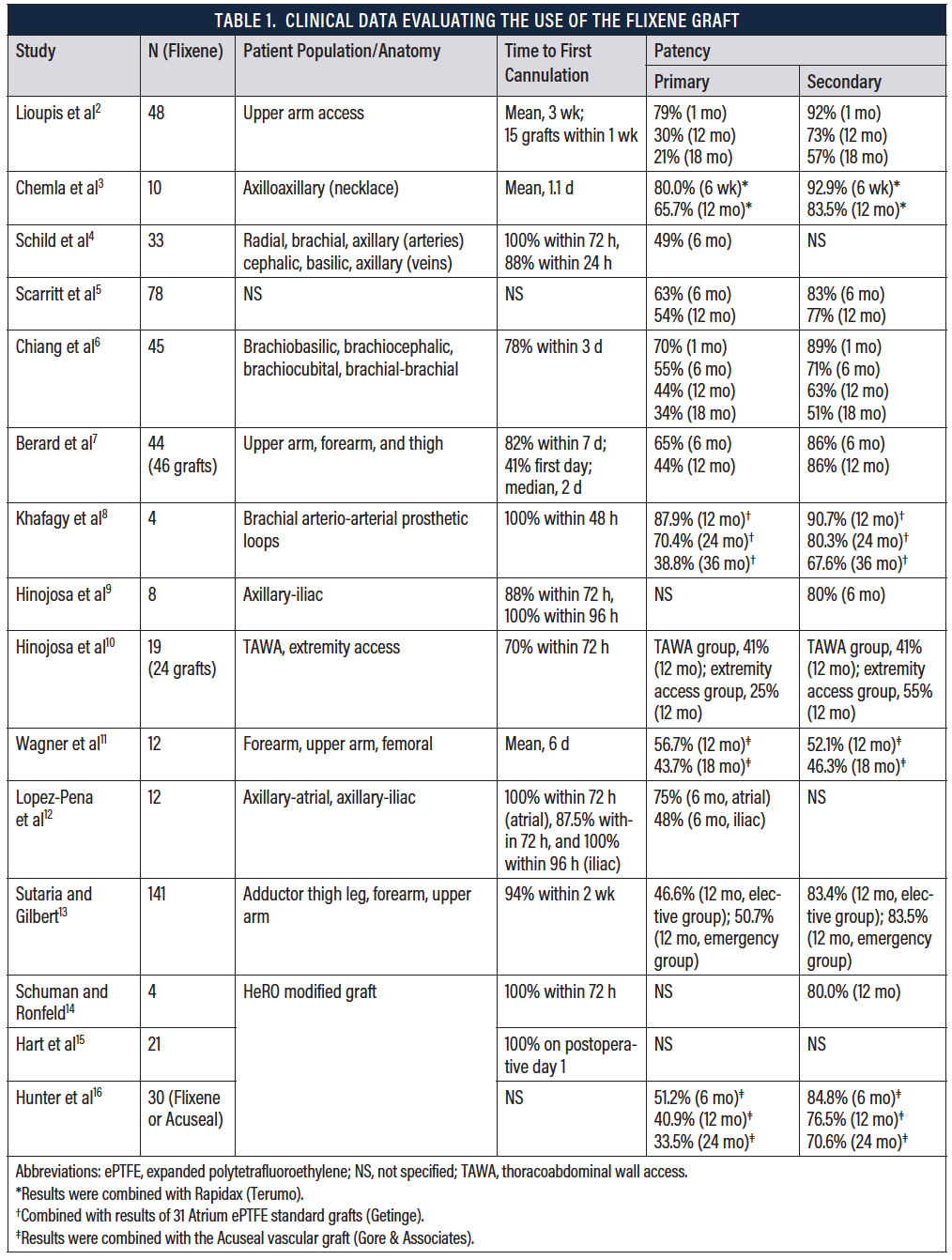 In addition, the HeRO device (Merit Medical Systems, Inc.) has been modified by surgeons by removing the attached standard wall PTFE graft and sewing on a Flixene graft to support early cannulation.14,15,17 The success of this practice led to the development of the Super HeRO adapter (Merit Medical Systems, Inc.), which allows for attachment of a Flixene graft directly to the outflow component with a clamp system, eliminating the need to sew the graft to the HeRO device.

Flixene has been used successfully in unusual situations where traditional access options have been exhausted. Hinojosa et al successfully used Flixene for axilloiliac access in eight patients who had exhausted all upper extremity, femoral, and intrathoracic central veins.9 Lopez-Pena et al reported use of the Flixene graft in an axillary-atrial configuration in four patients who had exhausted peripheral veins, with 6-month secondary patency of 100%.12 Finally, Khafagy et al used the Flixene graft as an interposition arterial loop graft to the brachial artery, with satisfactory midterm patency and no severe ischemia even when thrombosis occurred.8

For more conventional use, multiple systematic reviews have been conducted to document the experience with the Flixene graft. Ottaviani et al reviewed six publications that included a total of 260 procedures and noted 100% cannulation in < 3 days.18 Al Shakarchi and Inston reviewed over 214 procedures (later updated by the authors to include over 230 procedures) from these studies and reported safe early cannulation without any clinical disadvantages over standard ePTFE.19 Sutaria and Gilbert reported an additional 141 procedures with the Flixene graft to the previous data collection, supporting early cannulation, low complication rates, and favorable patency rates.13

PRACTICE EXPERIENCE WITH THE FLIXENE GRAFT

Collective data from the literature align with my work at Greenwood Leflore Hospital. I believe strongly that primary arteriovenous fistulas (AVFs) are the preferred access, and they constitute nearly 90% of my almost 400 new access procedures per year. When I cannot create a primary AVF, I have used either Flixene or a biologic graft in equal numbers. I have used Flixene in 86 cases over the last 2 years, half for new accesses and the other half to revise existing PTFE grafts. A benefit of Flixene is its ability to resist kinking in small radius turns. This has allowed for placement as a loop in the upper arm when both anastomoses are in the axilla due to concern about steal syndrome that would be more likely if the arterial anastomosis was to the brachial artery at the elbow. The Flixene graft has been most valuable when replacing segments of existing PTFE grafts that have to be revised for infection or segmental stenosis that has recurred or is resistant to angioplasty. The use of Flixene and early cannulation has allowed me to avoid central venous catheters in almost all of these cases.

Analysis of the current clinical data (from literature or manufacturer-conducted studies) supports the durability and reliability of the Flixene vascular graft for hemodialysis. The innovative Graft Deployment System (GDS) with the polyethylene sheath allows the graft to be placed in configurations that are not possible with other systems. The GDS provides a tight tunnel that is important for successful early use of the graft. The resistance to kinking, the elegant delivery system, and the ability to cannulate early are reasons to consider Flixene when a primary AVF is not possible or an existing PTFE fistula needs to be revised.

Protected by the following international and U.S. patent(s): http://patents.maquet.com. Getinge and Atrium are trademarks and/or registered trademarks and/or registered service marks of Getinge and/or Atrium Medical Corporation, their subsidiaries, and/or affiliates in the United States and/or other countries. Getinge and Atrium are registered with the U.S. Patent and Trademark Office Copyright 2020 Getinge. CAUTION: Federal (US) law restricts this device to sale by or on the order of a physician. Refer to Instructions for Use for current indications, warnings, contradictions, and precautions.

Current views on planning, creating, and preserving the optimal access for each patient.

Current views on planning, creating, and preserving the optimal access for each patient.