A look at the expanding role of interventional oncology for central nervous system and head and neck cancers.

Interventional oncology has demonstrated rapid growth in recent years, with the estimated number of annual procedures in the millions. Now, similar growth is anticipated in interventional neuro-oncology. Over the past 10 years, technologic advancements and improvements in techniques and training have been mainly applied to the treatment of hemorrhagic and ischemic stroke. However, these same developments hold promise in improving locoregional therapy for brain and head and neck tumors, managing tumor-related morbidity, and providing tissue for personalized precision cancer care.

Malignant tumors of the throat, larynx, nose, sinuses, and mouth account for > 700,000 new cases per year and are the most common cancers in Central Asia. Survival is highly dependent on tumor type and location, with average 5-year survival of 50% to 60%. The common subtype is squamous cell carcinoma, the sixth leading cancer worldwide by incidence.1 Primary brain tumors have accounted for > 290,000 new cases per year.1 Glioblastoma is the most common and aggressive tumor of the central nervous system. Despite decades of research, survival remains poor, with a relative 5-year survival of only 5%.2 Primary intraocular tumors are rarer, accounting for incidences in about 3,400 adults and 300 children a year in the United States. For adults, the most common primary ocular tumor is uveal melanoma, whereas for children it is retinoblastoma.3

Retinoblastoma is increasingly treated with intra-arterial (IA) chemotherapy. Initially, open surgical carotid infusion of triethylenemelamine nitrogen mustard was attempted in 1953.4 Forty years later, endovascular infusion of melphalan (L-phenylalanine mustard) into the internal carotid artery with distal balloon occlusion was described in 1993.5 With the development of smaller microcatheters, direct safe catheterization of the ophthalmic artery was possible and first described by Abramson et al in 2008 (Figure 1).6 Using a combination of melphalan, carboplatin, and topotecan, his group reported 10-year results in 2018 of 92% ocular survival in 452 eyes.7 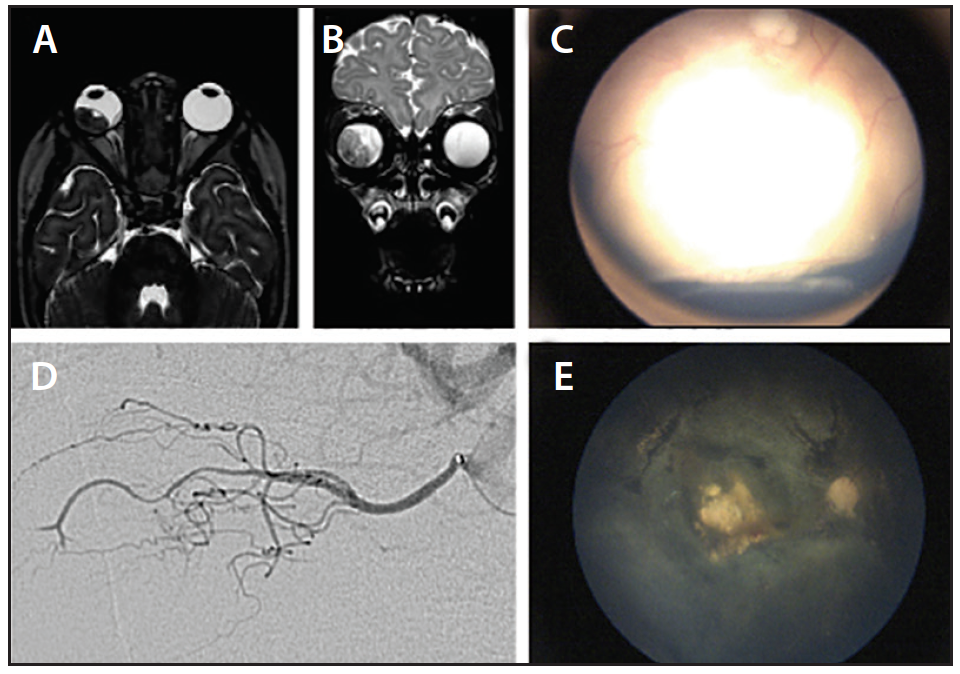 IA chemotherapy for brain tumors was first described in 1952 with open surgical infusion of the nitrogen mustard, mustine.8 Over the next 70 years, many have tried to use IA therapy in brain tumors with limited success. Unfortunately, most earlier studies involving proximal carotid and vertebral artery chemotherapy infusion resulted in high complication rates and negative side effects. With the improvement in microcatheter technology and distal intracranial catheterization, more recent studies have now demonstrated much lower neurotoxicity.9 Thus far, no studies have shown significantly improved survival rates, but other agents such as yttrium-90, viral vectors, and stem cells with oncolytic viruses hold promise.10,11

IA chemotherapy for head and neck cancer was also initially performed through surgical cannulation. In 1950, mustine was the first IA agent used.12 Then methotrexate, fluorouracil, vincristine, and bleomycin were used in trials over the next 40 years. In 1965, IA therapy combined with radiotherapy demonstrated a 40% tumor response compared to 10% with radiotherapy alone.13 However, subsequent randomized trials in 1983 and 1991 only found benefit in the oral cavity subgroup and floor-of-mouth subgroups.14,15 In 1994, Robbins et al developed RADPLAT, a protocol with high-dose superselective cisplatin, an intravenous (IV) bolus of sodium thiosulfate, and concurrent radiation therapy.16 Based on RADPLAT, a randomized trial comparing IA to IV cisplatin was performed (Figure 2). The subgroup analysis revealed a significantly higher local control rate with IA treatment in large tumors (≥ 30 mL); despite this, RADPLAT has not become more prevalent in Western countries. 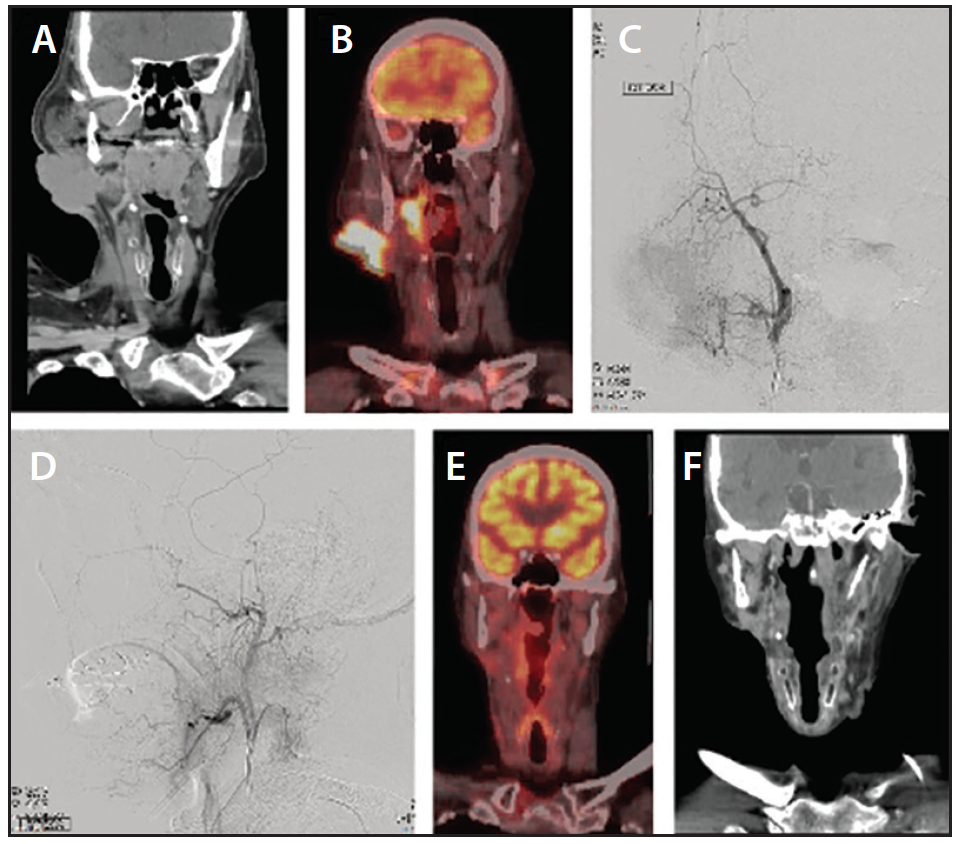 In Japan, there has been more enthusiastic adoption of IA therapy due to a higher incidence of maxillary sinus cancers. Many of their cases are done through retrograde cannulation of the superficial temporal artery, thus avoiding iatrogenic cerebrovascular complications. In 2014, a multicenter trial began in Japan evaluating RADPLAT for locally advanced maxillary sinus cancer (RADPLAT-MSC).17 Going forward, improved mapping of tumor blood supply may yield improved results. Location-based success in prior trials appears to favor tumors more likely to be fed by a single arterial pedicle. With the ability to perform cone-beam CT and perfusion maps in the angiography suite, tumors can be more completely treated through flow redirection and optimal selection of distal subselective infusion sites.

Subdural hematomas occur in approximately 2% of cancer patients, and coagulopathy is the primary etiology in cancer patients.18 Coagulopathy is a result of treatment side effects, immune-related platelet destruction, or bone marrow suppression and is often not correctable. Middle meningeal artery (MMA) embolization has now emerged as a potential treatment for patients with chronic subdural hematoma. The treatment aims to remove blood supply to the subdural membranes and interrupt the pathophysiologic basis of subdural expansion and evaluation. Although no randomized controlled trials have been performed, a meta-analysis of recent case series demonstrated a hematoma recurrence rate after embolization of 2.1% compared with 27.7% for standard treatment.19 MMA embolization is becoming an established technique for treating chronic subdural hematoma and may have a unique application for coagulopathic cancer patients without other options (Figure 3). 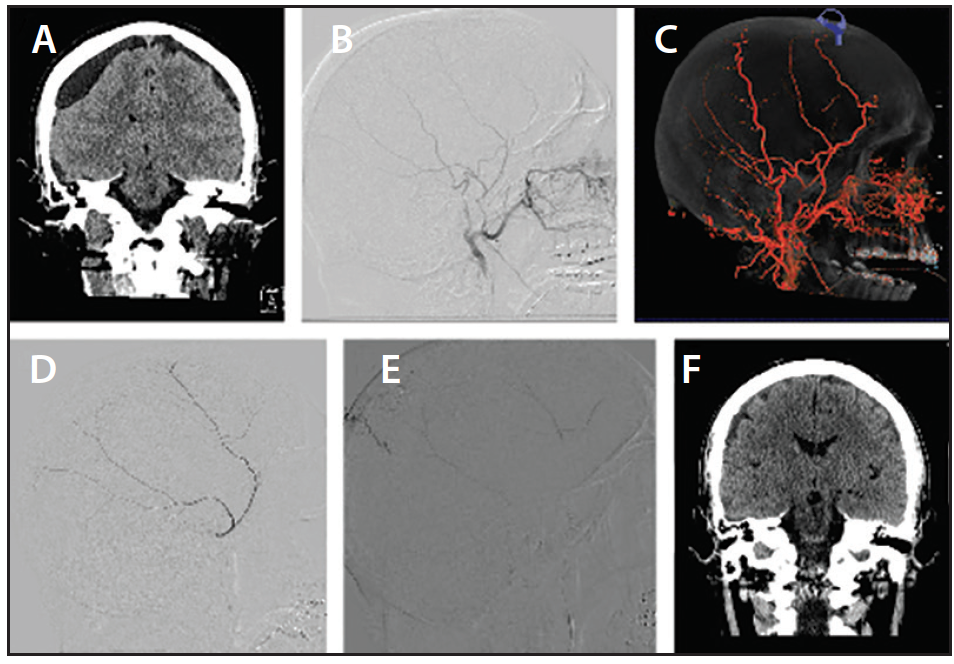 Figure 3. Subdural embolization. A 60-year-old man with relapsed B cell acute lymphoblastic leukemia presented to the emergency department with severe headaches and dizziness in the setting of severe thrombocytopenia. Noncontrast CT of the head demonstrated large chronic bilateral subdural hematoma without midline shift (A). As he was not a candidate for surgery, a transradial intervention was performed. External carotid angiography (B) and 3D digital subtraction angiography (C) demonstrated the normal origin of the MMA. Subselective MMA demonstrated an irregular appearance of the apical anterior division and the presence of a small vestigial meningolacrimal artery without the opacification of the ophthalmic artery (D). Given his severe coagulopathy, embolization was performed with n-butyl cyanoacrylate, which does not rely on the coagulation process. A catheter was wedged in the posterior division and embolization under pressure demonstrated a glue cast that filled the distal membranes and both divisions (E). A follow-up head CT demonstrated a significant improvement in the subdural hematoma and clinically his symptoms resolved (F).

Head and neck cancers are the most common cancers associated with hemorrhage. Up to 10% of head and neck cancers result in hemorrhage. Some cases involve tumor-related hemorrhage, but the most devastating subtype is related to complications from radiation with rupture of the carotid artery known as carotid blowout syndrome. Risk factors include wound breakdown, pharyngocutaneous fistula, and neck radiation dose > 70 Gy.20 Interventional neuro-oncology plays a key role in the multidisciplinary evaluation and management of these patients. Before endovascular therapy, average mortality rates were reported to be as high as 40% with traditional surgical ligation21; with interventional management, immediate mortality has significantly decreased. However, there is still room for improvement. If surveillance can anticipate eventual rupture prior to hemorrhage, treatment can occur at an even earlier stage with greater safety and lower morbidity.

Preoperative embolization has a long history and has been found to significantly decrease operative blood loss. Most vascular head and neck tumors include juvenile nasal angiofibromas and paragangliomas. Metastatic renal cell carcinoma and papillary thyroid carcinoma commonly require preoperative embolization, typically in the spine but occasionally also in the head and neck. Meningioma embolization is becoming less frequent; however, hemangiopericytomas and hemangioblastoma still require embolization to decrease surgical morbidity (Figure 4). Improvement in microcatheters and wires now allows for more precise embolization. The recent improvement in liquid embolic agents, such as Onyx (Medtronic), may also allow for a more complete devascularization. Future improvements are still possible such as percutaneous embolization techniques, hybrid techniques during surgical resection, and the development of liquid embolic agents that are more optimized for tumor vasculature. 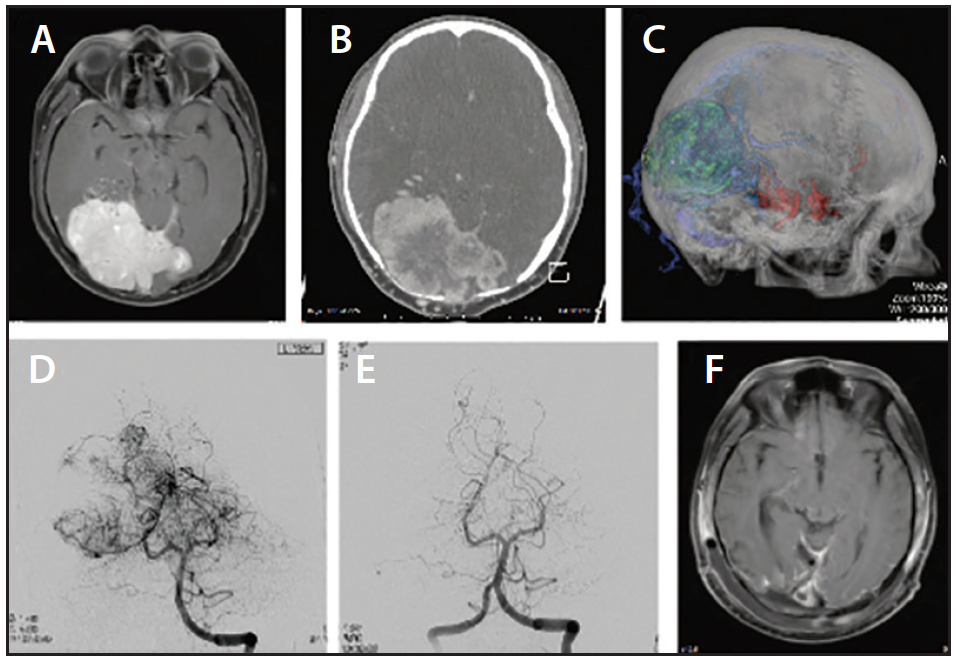 Figure 4. Preoperative embolization. A 34-year-old man with a hemangiopericytoma mistaken for a meningioma. The patient presented with acute onset of vision loss. Axial T1 after contrast (A), CT with contrast (B), and 3D reconstruction (C) demonstrated a large enhancing right occipital mass contiguous with the meninges and skull. The first attempt at resection was abandoned due to massive blood loss. Cerebral angiography demonstrated that the tumor blood supply was entirely pial, fed off the posterior cerebral arteries (D). Direct percutaneous embolization with Onyx was performed, followed by superselective embolization with ethanol over 10 pedicles. Postembolization angiography demonstrated no residual tumor blush (E). The tumor was resected uneventfully and postoperative axial T1 postcontrast MRI demonstrated complete tumor resection and no complication from embolization (F).

Ischemic stroke occurs more frequently in cancer patients than in the general population and is often associated with much worse outcomes. A recent study demonstrated an increased incidence of stroke at the time of cancer diagnosis.22 Lung, hepatobiliary, and pancreatic cancers have a higher association with stroke. Chemotherapy agents, cisplatin, methotrexate, and L-asparaginase may increase the risk of stroke. Immunotherapy has also been associated with neurologic events and central nervous system vasculitis. Interventional neuro-oncologists will play a key role in managing these patients, both by performing the proven mechanical thrombectomy procedures and helping build the multidisciplinary team needed to diagnose, manage, and prevent cancer-related stroke.

One element of stroke prevention is the proper management of cancer-related carotid stenosis. The incidence of severe carotid stenosis in patients who have received radiation therapy has been reported to be as high as 50%.23 For many of these patients, an endovascular stent is the treatment of choice due to the infection risk of a nearby tracheostomy and the difficulty of surgical dissection within an irradiated field. Treatment of these patients is becoming increasingly important as the head and neck cancer population is increasingly younger, with a greater lifetime risk of stroke if left untreated.

Personalized medicine based on the genomics of cancer is dependent on tissue sampling. Frequent tissue sampling for genetic and molecular analysis, both prior to and after each treatment phase may become more frequent.24 The interventional neuro-oncologist will be key in helping with complex head and neck biopsy of the skull, skull base, the deep neck spaces. Three-dimensional (3D) needle guidance packages on conventional CT, cone-beam CT, hybrid CT, MRI, and fluoroscopy imaging suites are greatly improving the precision and safety in which tissue can be obtained (Figure 5). These imaging modalities will be used more frequently as precision oncology matures and the need for biopsy increases.

Figure 5. Skull base biopsy. A 40-year-old man presented with new-onset seizures. Postcontrast coronal T1 (A) and coronal CT (B) images demonstrated a mass in the skull base eroding through the sphenoid wing and expanding the right foramen ovale. The patient was referred by neurosurgery for biopsy. Cone-beam CT and 3D needle guidance software allowed for safe precise needle placement along the classic Mullan trajectory to access the mass (C). Diagnosis was attempted by several fine-needle aspiration passes, but eventually, core biopsy was requested by pathology. Repeat cone-beam CT was performed confirming the location of the core needle before tissue sampling (D). The diagnosis was glioblastoma with transdural extension.

Interventional neuro-oncology is a diverse and emerging field with great potential. The technologic improvements that have enabled a revolution in the treatment of ischemic stroke and brain aneurysms have great potential in oncologic applications as well. For instance, the earlier published literature on superselective embolization commonly utilized catheters that were 2.8 F, much larger than the 1.2-F catheters now available. Hybrid imaging suites and intraoperative MRI or perfusion studies will also allow much more precise delivery of cancer therapeutic agents. Similar to how endovascular therapy for ischemic stroke was made successful by technologic innovation, endovascular therapy for oncologic disease in the brain, head, neck, and spine is now poised for a rapidly expanding role in cancer care.

Vertebral Augmentation and Ablation in Cancer Patients With Spine Metastases

By Rahul A. Sheth, MD; and Steven Yevich, MD, MPH