An overview of the ChEVAS technique, including results from a high-volume center and implications for practice.

Endovascular aneurysm repair (EVAR) has revolutionized the treatment of abdominal aortic aneurysms (AAAs). EVAR’s advantages of lower perioperative morbidity and mortality compared with open repair are perhaps even more important when treating AAAs involving the visceral segment of the aorta.1-3 As such, having viable off-the-shelf device options for the endovascular treatment of these aneurysms is crucial in modern vascular surgery. The use of parallel or “chimney” grafts was first described in the context of salvaging aortic branch vessels that had been inadvertently or unavoidably covered during EVAR.4 More recently, chimney grafts have been used alongside aortic stent grafts to elongate the proposed sealing zone in the visceral segment of the aorta. They were first described in conjunction with conventional EVAR,5,6 and although the combination has been largely successful, there are concerns regarding gutters that may form between the aortic stent graft and the chimney grafts, potentially leading to the formation of type Ia endoleaks.7 Using chimney grafts in conjunction with an endovascular aneurysm sealing (EVAS) system (Nellix, Endologix) may reduce the risk of gutter endoleaks because the polymer-filled endobags can fill potential gutters between the main aortic endograft and the chimney grafts. In effect, this forms a motionless environment at the proximal seal zone after the polymer curing process is complete (Figure 1).8,9

Custom-made endovascular devices using branches or fenestrations to allow continued perfusion of visceral branches must be considered the gold standard for treating juxtarenal and suprarenal aneurysms. However, in some situations, this approach is not feasible—most commonly in cases where the aortic morphology is unsuitable for a custom-made device or in an emergency where an off-the-shelf option is required. It is under such circumstances that EVAS with chimney grafts (ChEVAS) has been used in our institution. As an application of relatively new technology, evidence for the use of ChEVAS has come from case reports and series. The multicenter ASCEND registry has been established in eight international centers and supports a proof of concept for the use of polymer sealing technology alongside chimney grafts in the treatment of complex aortic disease.10 Early reports from the registry were explicit in stating that the future role of ChEVAS will be determined by studies reporting mid- to long-term follow-up.

ChEVAS has found widespread use as a procedure to treat failed EVAR, particularly in the context of type Ia and type III endoleaks. Its ability to reline an existing stent graft and proximally extend the seal zone has provided a useful option in the treatment of difficult complications.11,12 Similar complications after EVAS itself may be treated using the Nellix-in-Nellix technique, with or without the use of chimney grafts.13

There are few data available to compare ChEVAS and EVAR with chimney grafts (ChEVAR). However, a recent systematic review has suggested that there are fewer incidences of type I endoleak and chimney graft thrombosis after ChEVAS than ChEVAR, although these differences are not statistically significant.14

Data from our institution have shown that ChEVAS is a viable alternative to custom-made stent grafts in patients who are not fit for open surgery and whose aneurysm is either not anatomically suitable for a custom-made device or requires treatment sooner than such a device can be manufactured.15 We have used covered balloon-expandable stents as the chimney grafts alongside two Nellix stents in the ChEVAS procedures.

Our ChEVAS program commenced in July 2013, following CE Mark approval of Nellix and successful implantations in the infrarenal setting. Of the 79 patients treated with ChEVAS, 73 cases were intact aneurysms, six were ruptured aneurysms, 33 were aneurysms deemed unsuitable for a custom-made endovascular stent graft, and 22 were aneurysms requiring urgent treatment. The ChEVAS procedure was used to revise a previous aneurysm repair in 22 cases (10 EVAR, nine EVAS, and three open repairs). The number of chimney grafts deployed depended on the length of the seal zone required. Each case was planned to achieve a proximal sealing zone of at least 15 mm of the parallel-sided aorta, with a diameter of 20 to 30 mm. As such, 33 cases used one chimney graft, 26 cases used two chimney grafts, and 20 cases used three chimney grafts. Our cohort of 79 patients treated with ChEVAS has now reached midterm follow-up, and the results are currently in press.

The ChEVAS cases were planned using the 3mensio software platform (Pie Medical Imaging). At our center, the technical aspects of the ChEVAS procedure have been refined as our experience with the technique has grown. Our current operating procedure is outlined as follows.

Percutaneous access to the common femoral arteries (CFAs) is achieved bilaterally with ultrasound guidance, with two Perclose ProGlide devices (Abbott) deployed on each side. Access for the chimney grafts follows a more bespoke approach, using either the axillary or brachial artery with either an open or percutaneous approach based on the individual’s anatomy. The upper limb artery is cannulated with one, two, or three 7-F Flexor Ansel guiding sheaths (Cook Medical), depending on the number of chimney grafts that need to be deployed. With proximal and distal access established, unfractionated heparin is administered systemically at a dose appropriate to the patient’s body mass. A 14-F sheath is then advanced over a stiff Lunderquist wire (Cook Medical) via the CFAs bilaterally. Calibrated angiography is then performed to confirm aortic morphology.

The target vessels are cannulated via the proximal access point using the 7-F sheath. Appropriately sized chimney grafts are selected and aligned proximally to the planned sealing zone. For our choice of chimney graft, we favor a balloon-expandable stent—most commonly the Advanta V12 (Getinge). This technique allows the balloons within the chimney stents to remain inflated during the polymer curing process to reduce the risk of crushing. The Nellix stents are advanced over the Lunderquist wire to their position at the proximal sealing zone and then deployed through simultaneous inflation of the Nellix balloons to a pressure of 7 atm. The Nellix endobags are then prefilled with saline to confirm the required fill volume, and the saline is subsequently replaced with the same volume of polymer. During the polymer fill and curing process, all of the balloons in the main aortic stent graft and the chimney stents remain inflated. A secondary fill can be undertaken if necessary to ensure that the pressure within the endobag reaches 180 mm Hg and to confirm no evidence of endoleak on completion angiography (Figure 2). 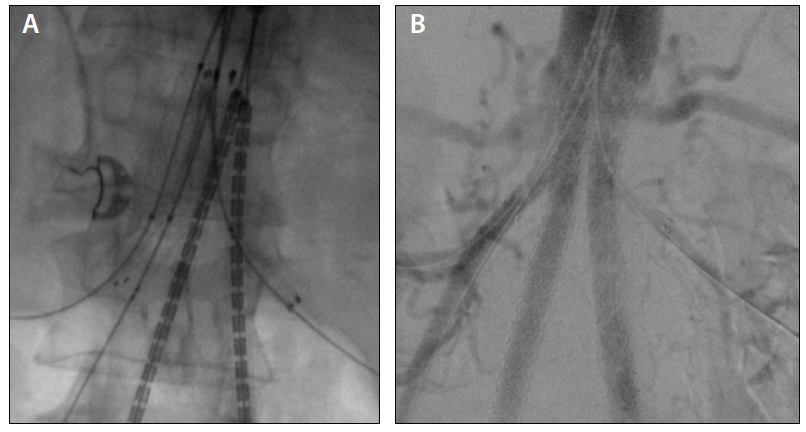 Satisfactory completion angiography confirms the patency of all the stents, along with the sealing of the aneurysm sac (Figure 3). If there is inadequate apposition of the Nellix stent to the common iliac artery, an additional self-expanding bare-metal stent (Zilver, Cook Medical) is used as a bridge. This additional procedure is commonly required in ChEVAS procedures because even the longest available Nellix stents are sometimes not long enough to achieve iliac sealing due to the more proximal sealing zone in the visceral aorta.

As was the case with the infrarenal use of EVAS, early results for ChEVAS were extremely promising. However, our center’s midterm results with ChEVAS beginning in 2013 (publication forthcoming), as well as those published by others,16,17 suggest concerning rates of migration, sac expansion, and type Ia endoleak as modes of therapeutic failure, raising important questions to address during ongoing and future phases of study before widespread adoption. Although innovation is essential for the development of vascular surgical techniques and improvements in patient care, robust safety and efficacy data must be established. It is essential that device-specific imaging surveillance and clinical follow-up for novel technologies such as this are undertaken to detect idiosyncratic potential failure modes, enabling prevention of or treatments for life-threatening complications such as secondary rupture.

Further studies to determine the safety and optimal applications of ChEVAS and infrarenal EVAS are ongoing. Although it was the goal to expand treatment to a broader population of patients with challenging anatomies, in 2016, the instructions for use for Nellix were revised to a narrower indication than originally approved in 2013. In early 2019, the system was recalled and its CE Mark suspended while the relationship between suboptimal midterm results and on-/off-label uses were examined. The device was reintroduced to centers participating in postmarket clinical investigations in Europe in June 2019. An investigational device exemption trial of EVAS continues in the United States, and a ChEVAS trial has been approved by the FDA and is expected to begin in 2020.

Ask the Experts: Acute TBAD: What Is Your Strategy Regarding Extent of Coverage and Use of Covered Versus Bare Stents?