An overview of four devices undergoing evaluation for the treatment of thoracoabdominal aortic aneurysms.

Endovascular repair of thoracoabdominal aortic aneurysms (TAAAs) has evolved over the past 2 decades. Custom-manufactured fenestrated and branched grafts, as well as parallel grafts, are the current options for repair in appropriately selected patients. In the United States, custom-manufactured grafts are only available in a few institutions via physician-sponsored investigational device exemption (IDE) trials, and manufacturing can take up to 10 weeks before delivery. Off-the-shelf devices have a role in elective and emergent cases but are also not available outside of physician-sponsored IDE trials or clinical trials. There are currently four off-the-shelf devices being evaluated in the United States: two are part of ongoing pivotal clinical trials and two are part of physician-sponsored IDE trials. Each has unique device designs that preclude uniform applicability and specific anatomic restrictions that limit their routine implantation.

The Excluder thoracoabdominal branch endoprosthesis (TAMBE; Gore & Associates) is a modular, multicomponent system composed of a multibranch stent graft, bifurcated component, and iliac limb extensions. This device uses the Viabahn VBX balloon-expandable endoprosthesis (Gore & Associates) for its branched vessel components. The TAMBE device was designed for repairing aneurysms that extend into the visceral segment of the aorta, with branches to incorporate the renal and mesenteric arteries. The TAMBE clinical trial (NCT03728985) is evaluating the device’s safety and effectiveness in type I to IV TAAAs and pararenal aneurysms.

The TAMBE device is based on Gore’s core technology, with a nitinol stent frame, conformable expanded polytetrafluoroethylene technology, and four portals for placing the Viabahn VBX bridging stent grafts. Target vessel stenting is achieved through a 12-F axillary sheath and all branches have preloaded wires, eliminating the need for branch portal catheterization (Figure 1). The original graft designs used during early feasibility studies had either retrograde or antegrade branches for the renal artery branches. 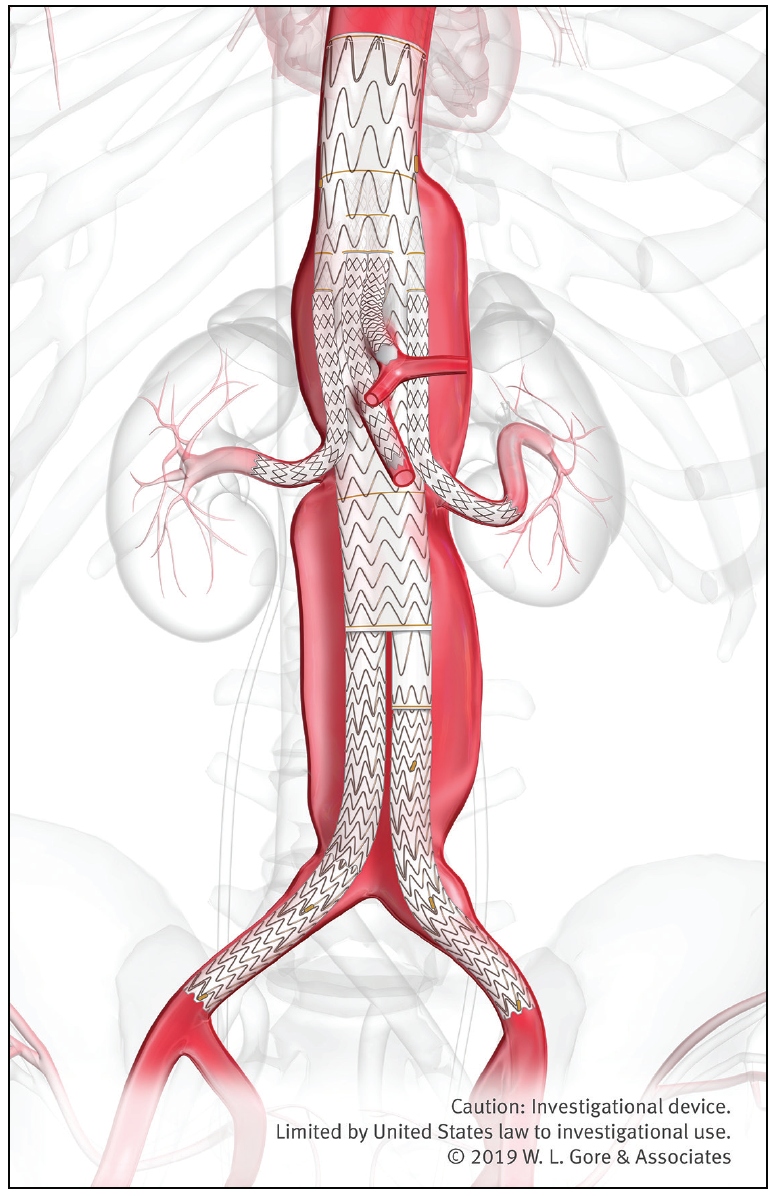 The pivotal trial has recently begun enrollment in the United States; moving forward, only the antegrade branch design will be evaluated for FDA approval. Oderich et al published the 30-day outcomes on early feasibility in which 13 patients were treated, showing a 92% technical success rate.1 There was only one renal occlusion due to a procedural dissection. No incidences of mortality, rupture, conversion to open repair, or spinal cord ischemia were reported. These results supported continuing the clinical investigation and proceeding to the pivotal trial evaluation of the device.

The Zenith p-Branch endovascular graft (Cook Medical) is designed to treat aneurysms that terminate at least 4 mm below the superior mesenteric artery (SMA) (pararenal). This device uses the Zenith Fenestrated platform (Cook Medical) and is composed of polyethylene terephthalate fabric with a proximal stainless-steel, uncovered, barbed supraceliac stent, followed by a series of nitinol Z-stents that incorporate a scallop for the celiac artery, an 8-mm strut-free fenestration for the SMA, and two renal pivot fenestrations (Figure 2). The two pivot fenestrations for the renal arteries allow catheterization of the renal arteries that fall within 15 mm of the outer diameter. Two configurations incorporate different distances between the renal fenestrations. 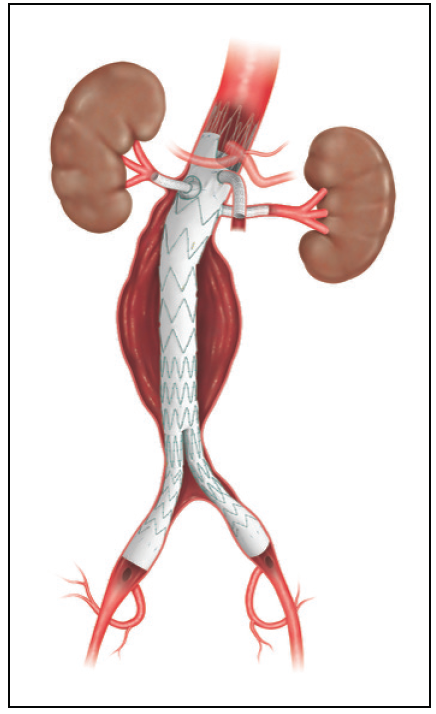 Initial evaluation suggested that ≤ 70% of patients with at least a 4-mm neck below the SMA could be treated with this device.2 This inclusion percentage may be overestimated based on more recent publications and usage.3 Farber et al published results of a prospective multicenter feasibility study of 30 patients treated with a mean follow-up of 28.7 ± 12.5 months and reported a technical success rate of 93%.4 There was no 30-day mortality, rupture, conversion, or stent fracture. Primary renal artery patency was 88.6% ± 4.4%. Renal insufficiency was seen in 7% of patients related to renal artery stenosis. Nine (32%) patients underwent 13 secondary interventions for two renal artery occlusions, one SMA occlusion, five renal or SMA stenoses, one renal stent kinking, one type II endoleak, two lower extremity claudications, and one type III endoleak between the p-Branch and renal stent. The device is currently in clinical trial (NCT02396199) at several sites across the United States with anticipated trial completion within the next 6 to 12 months.

Figure 3. The Zenith t-Branch for TAAAs.
Courtesy of Cook Medical.

Bisdas et al published the early outcomes of 22 patients treated with t-Branch.5 The extent of aneurysms treated included nine type II, 12 type III, and one type IV/V TAAAs. Branches were connected with either the Atrium iCast (Getinge) or BeGraft (Bentley) balloon-expandable covered stents. Technical success was 100%, and 6-month survival was 94%. Paraplegia was observed in one patient. Freedom from reintervention at 6 months was 90%. There were three renal artery occlusions in three patients. The authors concluded that the Zenith t-Branch device results were comparable with custom-made branch grafts, without the delay from manufacturing.

Off-the-shelf devices will play a critical role in providing endovascular treatment for patients with complex aortic aneurysm disease. Safety and feasibility studies have shown promising early results. Pivotal studies currently being conducted will provide intermediate and long-term results. All four devices described are currently only available for investigational use within the United States.

A Revolution of EVAR Imaging Technologies