A woman in her mid-50s was referred for a nonhealing VLU. She had a history of diabetes mellitus and long-standing venous hypertension. A left, medial, malleolar ankle ulceration was present for 4 months before her first visit.

The wound initially measured 20 cm2 (Figure 1). The patient underwent bedside debridement and compression therapy was initiated. Venous duplex ultrasound was performed and demonstrated reflux in the great saphenous vein (GSV) from the saphenofemoral junction (SFJ) to the ankle (maximal vein diameter, 9.61 mm) (Figure 2), as well as in the small saphenous vein (SSV) from the saphenopopliteal junction to the ankle (maximal vein diameter, 5.29 mm). An incompetent perforator in the medial distal calf measured 8.75 mm (Figure 2C).

Figure 2. Ultrasound images within the first week of initial consultation, confirming the left GSV diameter (A), reflux of the left below-knee GSV (B), and the incompetent perforator in the medial aspect of the distal lower left leg (C).

The patient underwent ablation of her GSV and SSV with the VenaSeal closure system within 4 weeks of her initial visit. Under ultrasound guidance, the GSV was accessed with a 21-gauge micropuncture needle below the wound at the ankle. A 7-F access sheath was inserted at the ankle to gain access to the GSV (Figure 3). After placing a J guidewire to the SFJ, the 7-F blue introducer/dilator assembly was advanced to the SFJ and positioned 5 cm distally. The VenaSeal delivery catheter was primed according to the instructions for use (IFU) and positioned within the system’s blue introducer sheath. The GSV was treated according to the IFU with additional aliquots of VenaSeal adhesive dispensed in locations of dilatation and/or large branch tributaries. The SSV was treated 1 week after the GSV in a similar fashion. 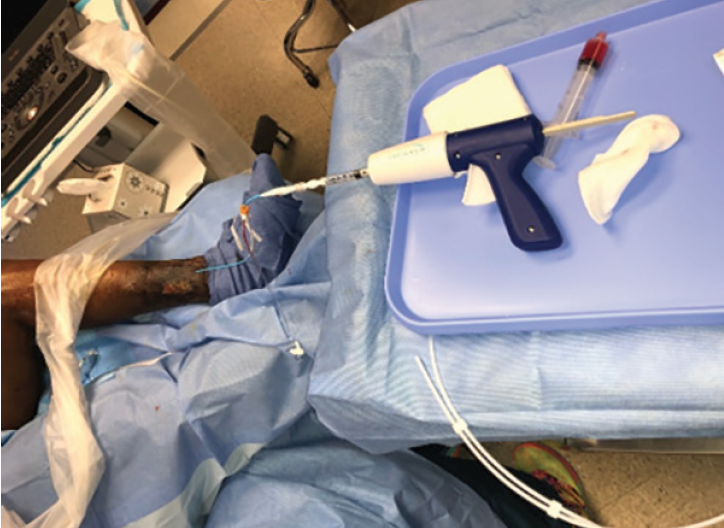 The patient continued to receive weekly wound care and compression in our office. Postprocedure duplex ultrasound revealed successful ablation of the GSV and SSV and incidentally demonstrated closure of the distal medial calf perforator (Figure 4).

Figure 4. Ultrasound image of the closed perforator in the medial aspect of the distal lower left leg 3 days after the VenaSeal procedure.

Time to wound healing was 6 weeks from initial treatment (Figure 5); she remained free from ulcer recurrence at the last follow-up visit (week 6).

Although compression has historically been the standard treatment for VLUs, thermal and nonthermal minimally invasive techniques have revolutionized the ability to provide a safe and expeditious treatment for a greater number of patients with VLUs in an outpatient setting.5 Endovenous closure of refluxing truncal veins have decreased healing times and recurrence, thus mitigating the high health care costs associated with chronic wound care.6

The VenaSeal closure system permanently closes the insufficient vein through endovascular embolization with coaptation using a proprietary cyanoacrylate-based adhesive. Due to possible thermal nerve injury, thermal closure techniques limit vein access from the ankle and, therefore, limit treatment of the entire length of the refluxing vein. Thus, most thermal closure techniques treat the vein from the upper/midcalf, necessitate perivenous tumescent anesthesia, and require postprocedural compression therapy. With no need for thermal energy, the VenaSeal closure system allows lower vein access to treat the entire length of the diseased vein, providing immediate closure of the entire length of the vein without tumescent anesthesia and eliminating the possibility of thermal nerve injury.

The VeClose Extension study (5-year follow-up of patients in the VeClose investigational device exemption study) demonstrated that VenaSeal closure system achieved closure rates of 94.6%,† with a 75%** improvement in Venous Clinical Severity Score at 5 years.7 A meta-analysis by Kolluri et al demonstrated that the VenaSeal closure system was superior for anatomic success and had the highest probability for anatomic success of complete closure within 6 months after intervention when compared with radiofrequency ablation, endovenous laser ablation, ligation and stripping, sclerotherapy, and mechanochemical ablation. Twelve studies within this meta-analysis, which included all CEAP (clinical, etiology, anatomy, pathophysiology) classifications, reported on postoperative pain and adverse events. The VenaSeal closure system ranked highest in reduction of postoperative pain from baseline and had the least reported and lowest probability of incidence for adverse events.8

Although the VenaSeal closure system has no risk of thermal nerve injury and high rates of anatomic success, the safety of using an adhesive implant within the vein can be a point of concern, especially in the CEAP 6 patient population that has active wounds. All patients receive circumferential standard sterile preparation of the entire affected leg and sterile coverage of the ipsilateral foot. There is no increased risk of wound infection for VLU patients undergoing the VenaSeal procedure.8 Of all CVI therapies evaluated in the Kolluri et al meta-analysis, adverse events (including hyperpigmentation, bruising, pruritus, skin irritation, rash, phlebitis, paresthesia, wound infection, thrombophlebitis, DVT, groin infection, and pulmonary embolism) were least likely to occur with the VenaSeal closure system.

Allergic contact dermatitis and inflammatory response to the adhesive have been reported, likely due to a type IV hypersensitivity.9,10 The VenaSeal closure system should not be considered in patients with allergies to tape adhesive, dermabond™*, or other types of adhesives. In addition, a higher incidence of allergic-type reactions has been anecdotally reported in patients with autoimmune disorders (eg, lupus, rheumatoid arthritis). Most reactions are self-limiting and can be treated with a course of antihistamines and/or oral steroids. However, in some cases, intravenous steroids have been used to quell a systemic response.

No randomized controlled studies have described the effectiveness of adhesive closure for treatment of VLUs. In a small study, 37 patients with 43 discrete ulcers underwent treatment with the VenaSeal closure system for CVI and demonstrated healing of all wounds within the mean time of 73.6 ± 21.9 days.11 The primary closure rate was 100% at 1 week and 3 months, and no serious adverse events were reported. There was one case of DVT (thrombus extensions), which resolved after anticoagulation. Despite demonstrating safety and efficacy, this study did not directly compare outcomes with other modes of venous closure. However, the VenaSeal closure system does have distinct advantages, including the highest anatomic closure rate and the potential to treat the entire length of the saphenous veins without the risk of thermal nerve injury. As in the presented case study, treating the entire length of vein may have the additional benefit of sealing off refluxing perforators, compared with thermal endovenous closures where adjuvant procedures are often necessary to close refluxing perforator veins. Historical data validate that residual incompetent perforators and varicose veins are often the source of slow wound healing and decreased freedom from recurrence.8

Perioperative discomfort is much lower for the VenaSeal closure system compared with other endovenous closure methods, likely due to the lack of tumescent.12-14 However, the VenaSeal procedure tends to be a more ultrasound skill–dependent technique, which may be a limitation for some proceduralists. Visualization of the catheter and adhesive has a higher learning curve than conventional thermal- and sclerosant-based closure techniques, but it is easily reproducible once learned.

Medtronic is committed to furthering the study of the VenaSeal closure system in advanced disease patients with a global, multisite clinical study (including CEAP 6 patients) called VenaSeal Spectrum (NCT03820947). This study is currently in its enrollment phase.

TM* third party brands are trademarks of their respective owner.

Intended Use/Indications: The VenaSeal™ closure system (VenaSeal™ system) is indicated for use in the permanent closure of lower extremity superficial truncal veins, such as the great saphenous vein (GSV), through endovascular embolization with coaptation. The VenaSeal system is intended for use in adults with clinically symptomatic venous reflux as diagnosed by duplex ultrasound (DUS).

Potential Adverse Effects of the Device on Health: The potential adverse effects (e.g., complications) associated with the use of the VenaSeal system include, but are not limited to, allergic reactions to cyanoacrylates, such as hives, asthma, hay fever and anaphylactic shock, arteriovenous fistula, bleeding from the access site, deep vein thrombosis (DVT), edema in the treated leg, embolization, including pulmonary embolism (PE), hematoma, hyperpigmentation, infection at the access site, non-specific mild inflammation of the cutaneous and subcutaneous tissue, pain, paresthesia, phlebitis, superficial thrombophlebitis, urticaria or ulceration may occur at the injection site, vascular rupture and perforation, visible scarring.

Warnings, precautions, and instructions for use can be found in the product labeling at http://manuals.medtronic.com.

CAUTION: Federal (USA) law restricts this device to sale by or on the order of a physician.

Case Report: Stenting for Subocclusion of the Right Common Iliac Artery Via a Transulnar Approach