A discussion of the genetic mechanisms, role of intermediary metabolism, complex relationship between inflammation and thrombosis, and future targets for thrombus resolution.

Venous thromboembolism (VTE) represents a leading cause of global mortality. Most recent clinical studies have focused on improving patient mortality using advanced hemodynamic parameters as risk stratification tools and then advanced interventions beyond the use of systemic anticoagulation, with mixed results.1,2 It is now clear that the long-term consequences of residual pulmonary thrombosis and thrombus burden in patients with acute pulmonary embolism (PE) should be evaluated. The determinants of thrombus development and thrombus resolution are incompletely understood. In vascular beds such as the infrarenal aorta, thrombus formation is hypothesized to stabilize a weakened aneurysmal wall, which may have sustained a dissection event.3,4 However, the pulmonary vascular bed appears to respond only adversely to the presence of residual thrombosis.5,6 An exaggerated hemostatic response leads to the formation of venous thrombi, obstructing blood flow and potentially causing acute and chronic symptoms as well as acute PE, which may be fatal.

A tremendous amount has been learned about VTE since Rudolf Virchow published his insightful treatise in 1856.7 Known for his early insights into mechanisms of VTE, including coining the terms embolism and thrombosis, Virchow recognized that pulmonary artery thrombosis originated mostly from venous thrombotic events in the lower extremities, stating in 1859 that “the detachment of larger or smaller fragments from the end of the softening thrombus, which are carried along by the current of blood and driven into remote vessels, gives rise to the very frequent process on which I have bestowed the name of ‘embolia.’ ”2 This work refuted the work of the French pathologist Jean Cruveilhier, who claimed that “venous phlebitis causes the formation of thrombus so that coagulation is the main consequence of venous inflammation.”8 His theory did not explain the disease in its entirety, but time and research have demonstrated that Professor Cruveilhier was more correct than he was given credit for.

Neither René Laennec nor Cruveilhier considered that PE originates in the veins of the lower extremities or pelvis, as both believed that the thrombi arose primarily in the pulmonary arteries, a view long held by many before Virchow's work. Related to this research, Virchow described the factors contributing to venous thrombosis. More theories and discoveries evolved subsequently.

What do we know about mechanisms of clot formation in 2020 and their implications for clinical management? Clinical risk factors such as surgery, trauma, acute medical illness, cancer, age, and obesity translate into VTE risk factors based on one or more of Virchow’s triad. Awareness of these risks enables evidence-based decision-making about VTE prevention. This article focuses on the hypercoagulability and venous injury/inflammation features that make these clinical risk factors important. A number of genetic and acquired risk factors have been identified for VTE that alter blood flow, activate the endothelium, and alter the activity of coagulation factors.9

Heritability plays an obvious role in the susceptibility to acute VTE. The most impactful genetic risk factors for VTE are deficiencies of protein C, protein S, and antithrombin.10,11 These phenomena are rare in the general population but increase VTE risk by as much as 10-fold in affected individuals. A less thrombogenic group of genetic abnormalities, including non-O blood group (increased factor VIII levels), factor V Leiden mutation, prothrombin gene 20210A mutation, and fibrinogen gamma variant 10034T, increase the risk of VTE by two- to fivefold. These genetic variants are present in a small percentage of the population as “gain of function mutations” that increase the risk of venous thrombosis.11 Single nucleotide polymorphisms (SNPs), which are typically one-base variants in coding and noncoding DNA sequences, ultimately cause functional differences in protein that regulate hemostasis and thrombosis.12 Examples include SNPs in genes encoding platelet glycoprotein 6, antithrombin III (SERPINC1), and coagulation factor XI.12 The clinical implications of determining the presence of such mutations in the general population is unclear and controversial. In certain settings, in the presence of acquired and heritable gain of function aberrations in thrombosis such as the presence of antiphospholipid antibodies, testing is an important step in guiding appropriate anticoagulation therapy.13,14

Metabolic syndrome (abdominal obesity, impaired glucose metabolism, dyslipidemia, and hypertension) is associated with a procoagulant and hypofibrinolytic milieu and thus an increased risk of vascular disease and venous thrombotic events.15 Adipocytes secrete inflammatory cytokines (adipokines). Recently, Stewart et al demonstrated an association between metabolic syndrome and pulmonary artery pressure in patients with submassive PE at the time of diagnosis and after catheter-directed therapy.16 This investigation is a cautionary note that the job of the physician is far from complete at the time of treatment. Careful attention to biochemical and clinical variables involved in thrombus formation and resolution may affect long-term patient outcomes. Lipoprotein(a) [Lp(a)] has Kringle domains that resemble those in plasminogen required for fibrin binding, although it is clear that we know less about the role of Lp(a) in VTE.17,18 Meta-analyses suggest that Lp(a) is associated with an increased risk of VTE,19 but other studies have been less conclusive; perhaps the risk of VTE increases in the presence of additional risk factors.20 Larger cohort studies would be useful to resolve this question. Because antisense oligonucleotide therapy has demonstrated effectiveness in decreasing the blood concentration of Lp(a),21 greater attention will likely be directed to understanding molecular and biochemical events caused by this inflammatory, thrombogenic, and vasoactive lipoprotein.

The interaction between the innate immune system and thrombosis is important for thrombus formation and resolution (Figure 1).22 Although hypothesis-driven research using randomized controlled trials is the benchmark for proving the effectiveness of new therapeutic agents, this is the final step in investigative research that cannot be reached without the efforts of our colleagues performing basic science research. Using animal models of thrombotic disease has allowed for observations in the research laboratory to be translated into humans. Physicians are reminded of the dynamic role between inflammation and thrombosis when managing conditions including diabetes, sepsis, obesity, bowel disease, acute respiratory distress syndrome, and cancer, as well as during surgical procedures. Three important cells that are potential targets for mediating “immunothrombosis” are leukocytes, platelets, and the vascular endothelium.23-28 When endothelial cells are inflamed and tight junctions are disengaged by intracellular phosphorylation events, subendothelial tissue factor (TF) is released, activating the extrinsic coagulation cascade (Figure 2). Activated endothelial cells and platelets also release Weibel-Palade bodies containing von Willebrand factor and CD62 (P-selectin), which promote platelet and leukocyte recruitment, respectively.29,30 Leukocytes also release cytokines including interleukin-1Β (IL-1Β) and IL-6, for which animal models have provided mechanistic insight.31-33 Thus, there is a clear association between VTE and inflammation.34-37 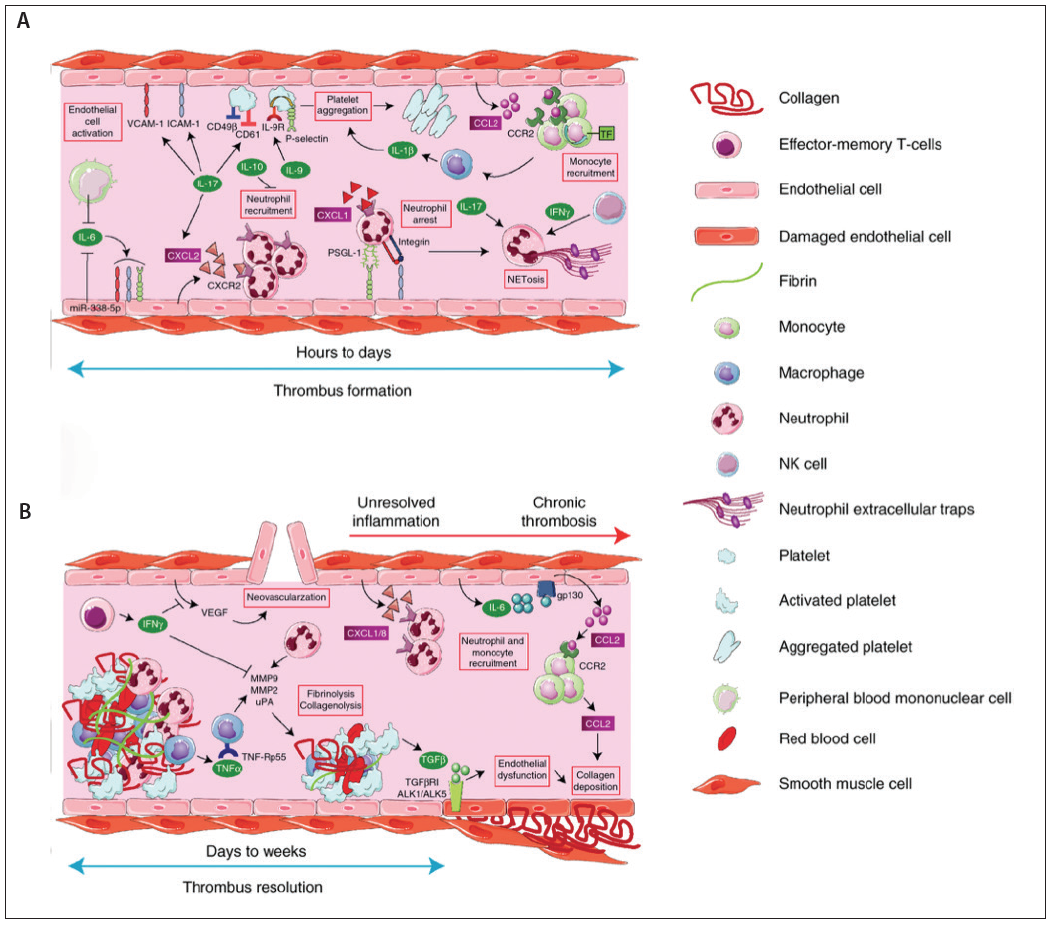 Figure 2. The interface and interconnection between coagulation and inflammation, a process exemplified by SARS-CoV-2 infection—“immunothrombosis.”

Although a more detailed discussion is beyond the scope of this article, it deserves mention that the recent COVID-19 pandemic has clearly demonstrated the presence of in situ thrombosis (ie, thrombosis without the requirement for an embolic event), making the case clear for the immunothrombotic phenomenon and the IL-6 receptor a rational therapeutic target for the humanized antibody tocilizumab.38 Another fascinating observation in patients infected with severe acute respiratory syndrome coronavirus 2 (SARS-CoV-2) is the presence of neutrophil extracellular traps (NETs).39 NETs are extracellular DNA fibers extruded from neutrophils produced in response to infection, allowing the neutrophils to “trap” and eliminate invading microorganisms. However, NETs are a prominent feature of patients testing positive for the COVID-19 amplicon and in patients infected with another single-stranded RNA influenza B.40-48 NETs appear to be involved in the activation of platelets, activation of the extrinsic and intrinsic coagulation cascades, and inhibition of antithrombin III.49,50

The principal fibrin-forming mechanism underlying cancer-associated thrombosis is considered to be upregulation of TF expression in cancer cells and cancer cell–derived membrane vesicles.51 Although a detailed discussion is outside the scope of this article, it seems likely that the TF/factor VIIa pathway is a principal initiator of fibrin formation in cancer patients.52,53 Cancer cells express TF on their plasma membrane and release TF-bearing procoagulant microparticles into the circulation. Furthermore, polyphosphate/factor XII–triggered coagulation has been demonstrated in prostate cancer–associated thrombosis.54 Tumors have been shown to release molecules, including adenosine triphospate, that activate the platelet P2Y12 receptor, and platelet-derived mediators have also been shown to regulate tumor growth.55,56

It is clear that many patients with residual PE remain symptomatic, and it is the authors’ belief that clot extraction and/or augmenting early thrombus resolution in carefully selected patients are tantamount to avoiding thrombus-mediated pulmonary artery remodeling and vascular dysfunction. Clinicians and basic scientists must make a concerted effort to delineate signal transduction pathways in cells that regulate thrombus formation and resolution. The composition of a thrombus includes fibrin, red blood cells (erythrocytes), platelets, and leukocytes. Long-term and current aspirin use was shown not to alter right ventricular strain or pulmonary thrombus burden using the Qanadli score for pulmonary artery thrombus burden in a small study,57 yet targeting other pathways in the platelet may improve thrombus resolution in certain conditions. In a murine model of VTE, endothelial but not platelet transforming growth factor–Β1 signaling was proposed as a critical determinant of thrombus resolution.58 Venous thrombus was shown to secrete matrix metalloproteinases (MMPs) that can remodel veins, and activated platelet-derived MMPs are found in extracted thrombus and in the circulating blood in patients with acute thrombotic events.59,60 Erythrocytes, like platelets and the vascular endothelium, produce nitric oxide (NO), which has anti-inflammatory, antithrombotic, and antiproliferative properties.61 Erythrocyte-derived NO can alter vascular tone and regulate thrombosis in various vascular beds.62 As the hematocrit rises, bleeding time shortens.63 Therefore, erythrocytes can also tip the balance toward thrombosis in certain conditions such as polycythemia vera and perhaps even prolonged intravascular depletion.

Although there is a critical relationship between inflammation and thrombosis, the complex interactions, time course, and specific origin of various cytokines and chemokines involved in the development of VTE remain obscure. It is becoming clearer, as with the arterial side of cardiovascular disease, that unresolved inflammation in acute thrombosis could be critical in the evolution of acute and chronic venous thrombosis. The future is exciting, but many questions remain.

COVID-19 and VTE: What We Know and What We Don’t Know