A review of interventional thrombolytic and catheter-based therapies for PE treatment.

Pulmonary embolism (PE) is a growing field in endovascular intervention, with a robust ongoing search for the endovascular “holy grail” to treat this life-threatening disease. Patients presenting with PE are now routinely risk-stratified with PE response team (PERT) algorithms to identify those with hemodynamic instability and right ventricular (RV) dysfunction. For patients with intermediate-high and high-risk features characterized by European Society of Cardiology criteria, care is escalated with systemic thrombolysis or endovascular approaches.

The endovascular holy grail is a device that can be used by one operator in a stand-alone procedure, with minimal bleeding and periprocedural risk, effective clot resolution, and minimal blood loss. Numerous devices have emerged throughout the past 10 years, but they have failed to meet all of these criteria. Many of the existing thrombectomy devices commonly used to treat venous thromboembolism have been repurposed from other medical devices and have undergone new iterations. There is no guideline-directed endovascular approach at this point, but the field is quickly moving forward with innovative devices and clinical trials to establish benefit. To date, no device has been shown in randomized trials to improve survival. This article outlines the currently available devices and discusses their supporting data.

Our current strategy at Beaumont Health is to discuss each escalation patient on a multidisciplinary PERT call and tease out clinical and CTA criteria to guide escalation. Recent device trials have focused on rapid improvements in RV/left ventricular (LV) ratios as assessed by CTA as proof of benefit (Table 1).1-4 Clinical improvement, as determined by improvements in heart rate and oxygen requirements, and subjective improvements in dyspnea serve as our point-of-care endpoints. Length of stay has been shortened with the PERT risk stratification algorithm and the current escalation strategies.

The tissue plasminogen activator (tPA)–based approaches that have gained momentum are EKOS ultrasound-assisted thrombolysis (USAT) infusion and the Bashir endovascular catheter. Both have demonstrated effective clot lysis, achieving clinical endpoints with doses of tPA reduced to < 24 mg. Ongoing research is being pursued to understand the microvascular benefits of thrombolytic infusion that may occur beyond simple extraction of large visible clots via thrombectomy. Three-dimensional CTA is being used to characterize the blush score and evaluate microvascular perfusion before and after USAT.5 These devices have been compared with anticoagulation-alone strategies in patients with submassive PE. As we move forward, identifying specific patient types for different strategies will help optimize outcomes. At Beaumont, we have evolved into a thrombectomy-first approach for proximal clot and a catheter-directed tPA approach for more diffuse and distal clot. Since January 2019, we have escalated therapy in 125 intermediate-high–risk PE patients using FlowTriever thrombectomy in 84 patients and EKOS in 41 patients, with favorable outcomes.

EKOS therapy uses ultrasonic waves in combination with clot-dissolving drugs to treat PE. With a sophisticated catheter and an ultrasonic core, the system effectively targets the entire clot (Figure 1). The new generation of the device (EKOS Control Unit 4.0) simplifies bilateral PE treatment with the following features: the ability to manage two EKOS devices at once with A/B channels and easy-to-read screens for bilateral PE acoustic pulse thrombolysis treatment; a portable size to easily integrate into the hospital workflow; faster setup time due to on-screen step-by-step prompts; on-screen troubleshooting that identifies where an issue is and how to correct it; and a built-in battery to transport patients from the lab without interrupting therapy. 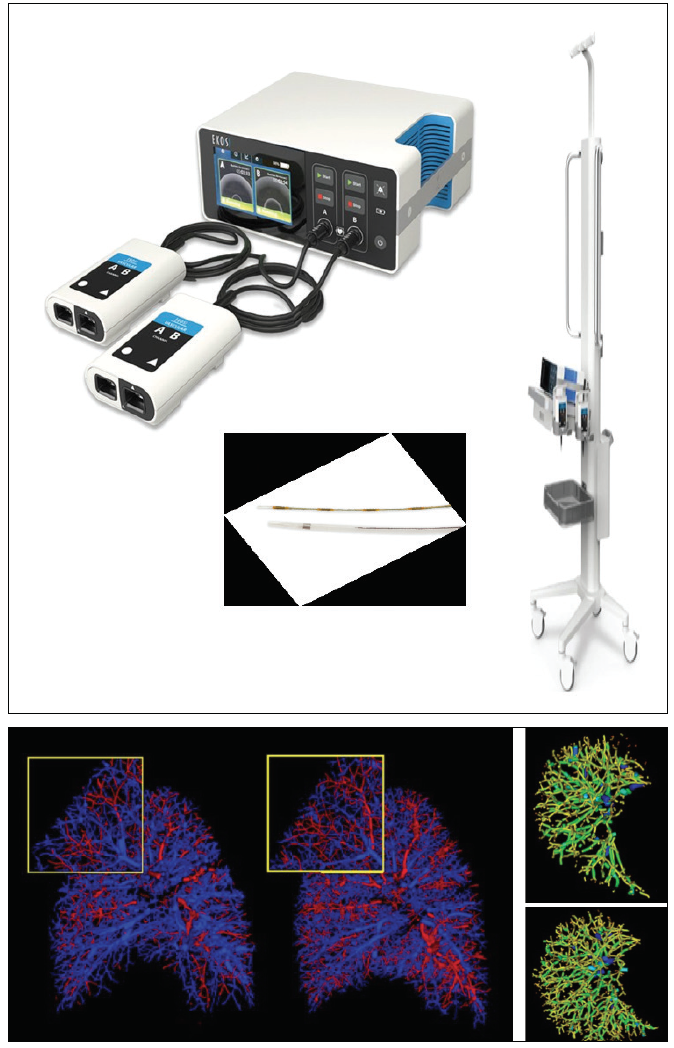 The safety and efficacy of EKOS have been evaluated in several trials. ULTIMA was a prospective randomized controlled trial of 59 patients that showed superiority of EKOS over anticoagulation alone in RV/LV ratio reduction without an increase in bleeding.6 The prospective SEATTLE II trial (N = 150) confirmed that EKOS improved RV function, pulmonary hypertension, and clot burden without an increase in bleeding.2 The prospective, randomized controlled OPTALYSE trial (N = 101) used lower doses and infusion times for the treatment of acute PE without an increase in bleeding.7 The RV/LV ratio was reduced by 23% at 24 hours in ULTIMA, 25% at 48 hours in SEATTLE II, and 23% to 26% at 48 hours in OPTALYSE. All three trials demonstrated a low risk of bleeding and intracerebral hemorrhage (0% in ULTIMA, 10% in SEATTLE II, 3% in OPTALYSE). Results were achieved with 76% less thrombolytic drug dosage than standard treatment (total dose, 20 mg in ULTIMA, 24 mg in SEATTLE II, and 4/8 mg to 12/24 mg in OPTALYSE). The KNOCOUT PE retrospective and prospective registry (N = 1,500) is currently recruiting and aims to understand acoustic pulse thrombolysis treatment protocols and effects on long-term outcomes.8

The Bashir endovascular catheter is an interventional tool that puts the control of the procedure directly in the hands of the physician, who can control the expansion and contraction of the infusion basket from about 3 mm when closed and up to 45 mm in diameter when fully deployed (Figure 2). The device has a low-profile, 7-F design. It pulse sprays or infuses via 48 laser-drilled holes through the six limbs of the expandable infusion basket, and the Bashir endovascular catheter line also provides the ability to infuse along multiple lengths of catheter shaft together with the infusion basket. A unique aspect of this catheter-directed thrombolysis (CDT) device is the ability to create immediate blood flow through the culprit clot once the infusion basket is deployed, promoting rapid reperfusion and accelerated thrombolysis of the clot burden, saving time, and using a smaller lytics dose.

Figure 2. The Bashir endovascular catheter (A). The infusion basket has 48 laser-drilled holes through the six limbs and expands and contracts from 3 mm when closed and up to 45 mm when fully deployed (B).
Courtesy of Thrombolex, Inc.

A first-in-human (FIH) clinical trial to treat patients with acute submassive PE was completed in December 2019. The FIH trial met its primary endpoints with no major bleed events and no major adverse events. In addition, the trial demonstrated a significant mean reduction in the RV/LV ratio to 36.7% in 48 hours. There was a mean clot burden decrease of 37.1%, as measured with the Miller Index, after a mean dose of 13.6 mg of recombinant tPA over 8 hours. Patients treated with Bashir endovascular catheters had shorter intensive care unit (ICU) stays and overall stays compared with previously published studies in which CDT or mechanical thrombectomy devices were used to treat PE.9

The success of this FIH trial led to FDA approval of the pivotal RESCUE trial. This single-arm study will treat patients with acute submassive PEs and is targeting 125 patients at 20 institutions. The protocol of RESCUE has been modified to reduce infusion time from 8 hours in the FIH to 5 hours in the RESCUE trial. The recombinant tPA dose will be limited to up to 14 mg for bilateral PEs.

PE cases are treated with thrombolytic therapy as a front-line standard of care. However, more aggressive catheter-based strategies may be useful when there is excessive clot burden, in hemodynamically unstable patients, and when thrombolytics are contraindicated or standard therapy fails. There are five catheter-directed techniques: USAT, rheolytic embolectomy, rotational embolectomy, aspiration thrombectomy, and thrombus fragmentation. Interventional thrombectomy is increasingly being used, and PE intervention is one of the fasting growing fields in endovascular intervention. Recent advances specific to PE have pushed the field forward, and the FDA is involved with study design to help promote product approval and allow quicker clinical access to new technology. There is no current standard of care for endovascular PE intervention, but the devices that are available are a dramatic improvement over previous technology.

The FlowTriever thrombectomy system is designed for the removal of clot from the pulmonary arteries through both large-bore aspiration and mechanical retraction, without the need for thrombolytics (Figure 4). The FLARE trial was a prospective, multicenter, single-arm study that earned the FlowTriever system a PE-specific indication.3 The study met both of its primary safety and effectiveness endpoints, showing large and rapid reduction in right heart strain with no device-related major adverse events. The study also showed shorter ICU stay and overall length of stay for patients treated with FlowTriever compared to previous studies in which thrombolytic drugs were used. 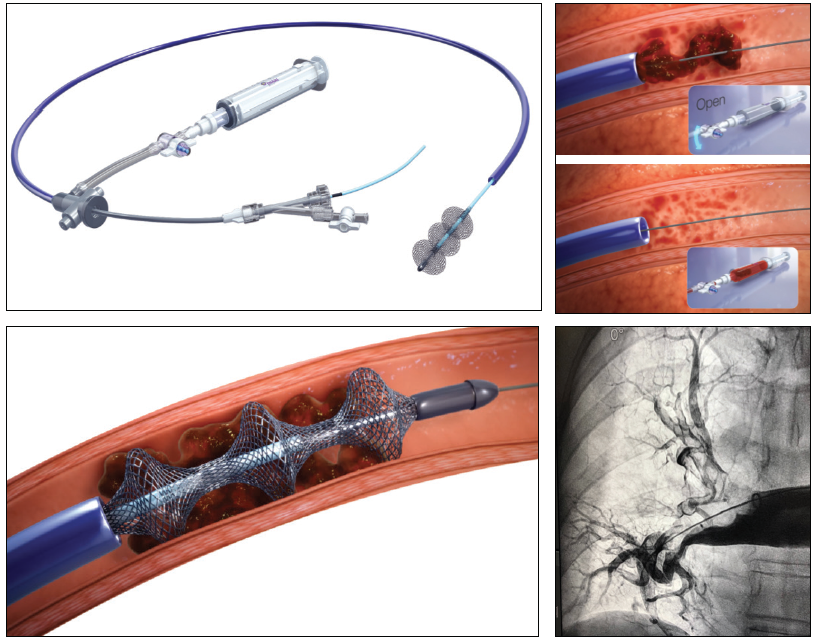 The third-generation AngioVac system (AngioDynamics) includes a cannula with either a 20°- or 180°- angled tip (Figure 5), which potentially facilitates easier navigation through the pulmonary vasculature. It features a self-expanding, nitinol, funnel-shaped tip to enhance drainage flow when actuated using a sliding sheath and prevent clogging of the cannula with undesirable intravascular material (eg, thrombi, emboli, vegetation). Data from the second-generation AngioVac device showed the device to be safe and effective in removing caval thrombus, right atrial thrombus, cardiac lead vegetation, and tricuspid valve vegetations. The device is used off label for PE.10-13

Figure 5. Third-generation AngioVac (A, B). Clot extracted using the AngioVac (C).
Courtesy of AngioDynamics, Inc. and its affiliates.

Interventional treatment for PE has entered a rapid phase of evolution, with new devices becoming available on top of the transformational modification of first-generation devices. The data are inspiring but still lagging, and interventional guidelines need a universal standard. We need to continue to push for large data sets driven by consortiums/collaborations (such as the FLASH registry promoted by Inari Medical) to allow for the development of guideline-directed approaches. We have made great strides in endovascular PE therapy but have not quite found the holy grail. Several new devices are in the pipeline for PE treatment. Start-up companies such as Truvic are getting closer to “grail” status in peripheral vascular thrombus management by enabling single-session thrombus removal without the use of thrombolytics and with minimal blood loss by allowing access to proximal and distal clot with advanced catheter technology.

Time will tell, but we are hopeful that these technologic advances will allow for dramatic clinical improvement and low periprocedural complications, thus broadening their use to all intermediate-risk PE patients. At this point, the decision to use CDT is based on the individual patient and their clinical scenario. Published literature supporting the effectiveness of CDT by clinical endpoints is still in development.